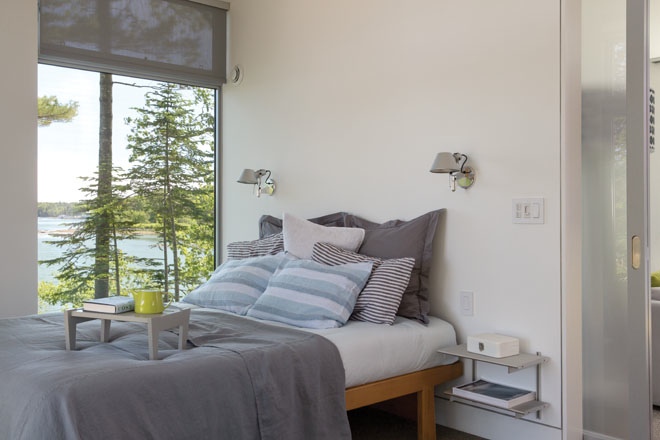 The all-cotton linens on the bed are from Schweitzer Linen in New York. 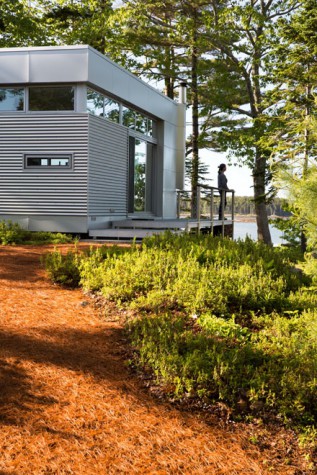 One enters the house via a deck that Rockport Steel built using fiberglass decking, aluminum posts and floor joists, cable railing, and a teak cap. The deck is a custom add-on to the basic modular design from Rocio Romero. 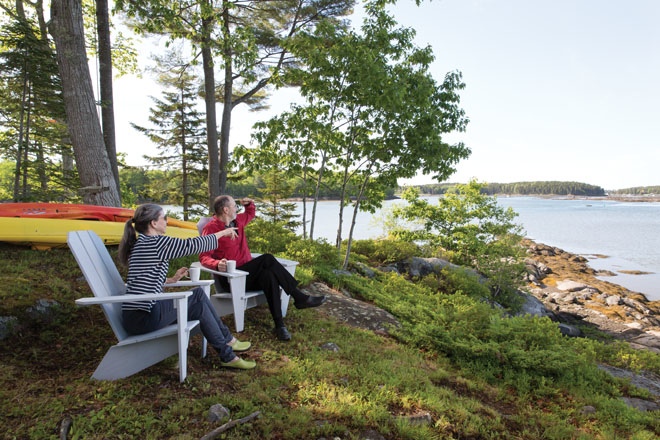 The homeowners at the tip of their property, which is surrounded on three sides by water. 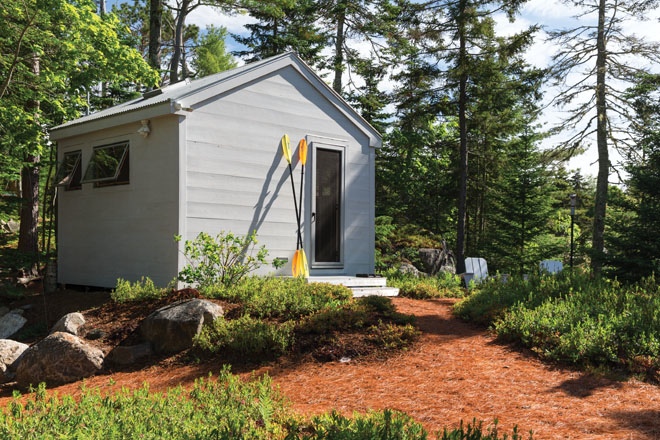 An old shed became “the bunkhouse”, which houses the property’s second bedroom and a mini-kitchen. 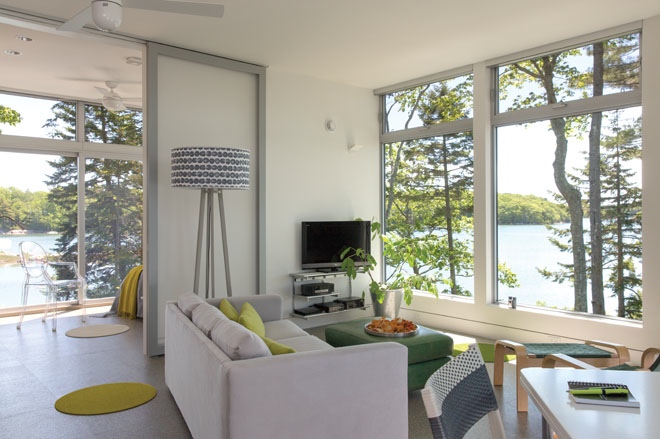 The original design of the LV Mini consists of one room that serves as kitchen, living room, dining room, and bedroom. The owners complicated that basic design by using a partial wall with translucent sliding doors from Raydoor to separate the living room from the bedroom. A couch, bought when the couple was first married, has been recovered in Ultrasuede. The bedroom has a plastic chair that is a version of the Philippe Starck “ghost chair,” which the homeowners chose because they can look through it to the outdoor view. 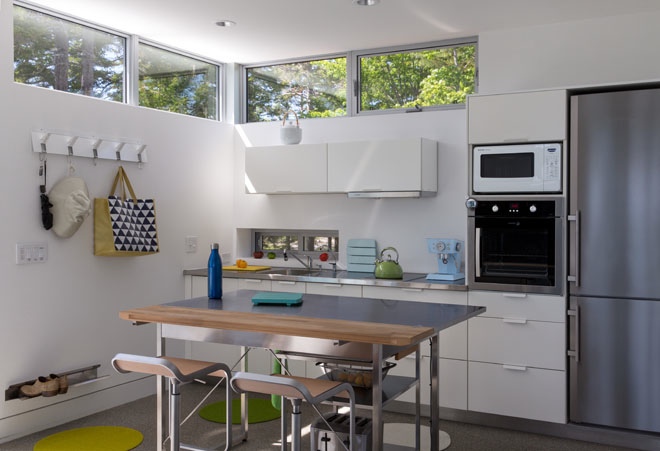 A small, horizontal sink window echoes the clerestory windows above, as do the horizontal cabinets. The stainless-steel-topped kitchen island and stools provide an eating space. 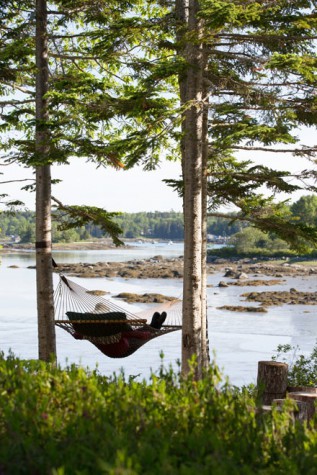 A hammock with views of the changing tides. 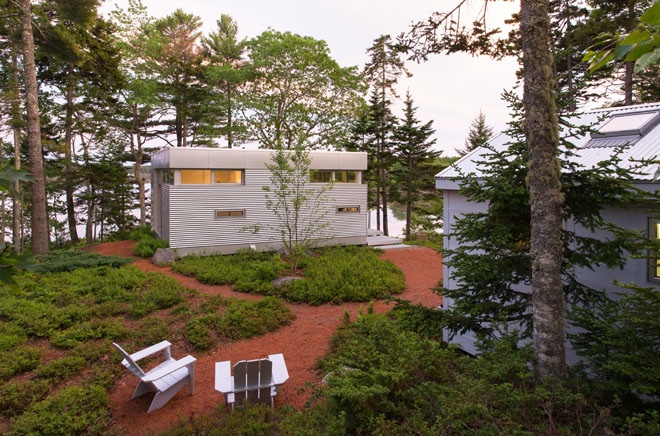 A view of the north side of the house with its smaller windows. Aluminum in two textures—smooth and corrugated—wraps the house. The roof is flat, purposefully white to prevent heat gain, and made out of a material that is often used for lining swimming pools. After disrupting the site for building, the homeowners wanted to restore the natural environment, which they did, in part, by planting blueberry sod. 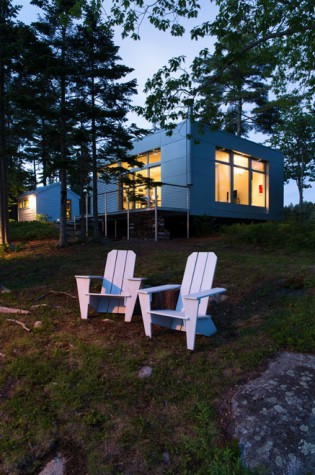 The homeowners customized their home with a woodstove with a pipe chimney that is wrapped in the same aluminum that sheathes the entire box of the house. The prototype for the home uses steel coated in a resin called Kynar, but the homeowners opted for aluminum instead, because it is salt resistant. 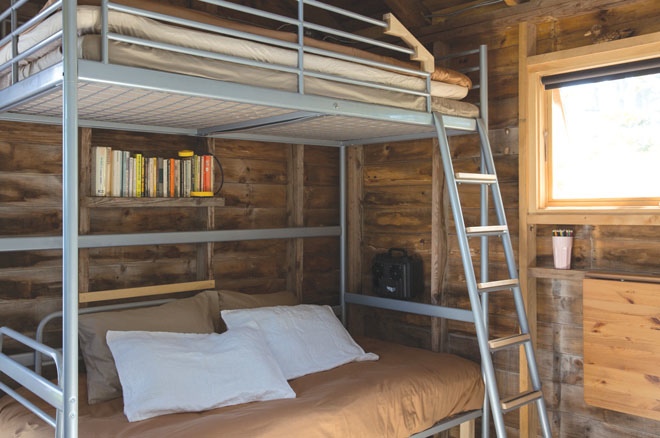 -The interior of the bunkhouse has a bunk bed, which was made by combining a loft bed and a day bed.

Bigger is not, of course, always better, and that awareness was very much in Dayne Lamb and Gardner Stratton’s minds when they thought about building a home in Maine. Showy new mansion? Old-school grand “cottage”? No, not for them. In 2005 they had read a Paul Goldberger article in the New Yorker about Chilean-American architectural designer Rocio Romero that had them thinking about small spaces. Goldberger’s article was about Romero’s LVs, a series of prefab, ultra-modern houses, the basic pieces of which can be put on a single flatbed truck and shipped to be assembled anywhere. Presumably any good contractor can build the LV, which comes with detailed instructions. That said, the contractor would have to supply and install everything save the basics: plumbing, electrical, kitchen interior, bath interior, windows, and so on. Romero provides the shell, post-and-beam, roofing structure, exterior wall panels, and steel siding, which is coated in a resin called Kynar. Romero also, needless to say, provides the design, which is a big part of the appeal. The LV gives the purchaser a sleek, well-designed, minimalist house while streamlining the architectural process. An LV house is an elegant, passive solar box wrapped in steel and dominated by large glass windows and doors. It is so named because Romero located the prototype house, which she built for her parents, in Laguna Verde, Chile. Lamb and Stratton wouldn’t have been able to act on their interest in the LV if Romero hadn’t developed a new model in her LV series: the LV Mini, a scaled-down take on the original design.

In 2008, after 20 years of looking for coastal property, Lamb and Stratton found a 1.3-acre spit of land in Tenants Harbor that was surrounded on three sides by water. The land housed a “junky unmaintained summer shack,” an outhouse, and “a shed with Playboy pinups, a water tank, and household debris,” says Lamb. Still, the forested property, full of low-bush blueberry plants and water views, was beautiful: deeply peaceful and private, although there were, in fact, neighbors not too far away. One could renovate the modest existing property or rebuild in the footprint, but one could not expand. Lamb and Stratton didn’t mind the challenge. Says Lamb, “Small spaces make you edit, and I think when you edit, things become more harmonious.” The LV Mini was “about to the inch, the footprint and volume” of the 625-square-foot summer shack, according to Lamb.

Rocio Romero will customize her homes for clients, or clients can customize themselves, which is what Lamb and Stratton opted to do, using two separate builders. Some of the customizations were simply to finish the house and involved what every LV customer needs to do in some form or another. For instance, the couple bought kitchen and bathroom components through IKEA and custom windows and sliding glass doors from Fibertec in Canada. Other changes were to suit how they hoped to function in the space. The LV Mini is designed to consist of one room (which serves as kitchen, living room, and sleep space) and a separate bathroom. Lamb and Stratton bisected this main space with a partial wall. An outsized door with a translucent panel slides shuts to create a separate bedroom. They also framed to allow themselves a small pantry closet for storage. Rather than putting sliding glass doors on the south wall of their house (the wall that faces the water), they put sliding glass doors on the east and west sides, in order to create a cross-breeze.

Building in Maine, Lamb and Stratton had concerns that other LV owners might not have, namely, the cold and the winds off the saltwater cove. They added a woodstove for the main room and a towel-warmer radiator for the bathroom. They also opted for salt-resistant aluminum rather than steel for the exterior siding, which comes in two textures (corrugated and flat panel). In keeping with the modern aesthetic, the woodstove is a gray triangular box that fits into the corner of one wall at waist height. “In a small space, if you keep everything off the floor, everything looks better,” says Lamb, explaining the unusual placement. She wanted to see all the corners of her room. Outside, the stove’s tube-like chimney is wrapped in the same aluminum that clads the entire house.

Beyond the woodstove, Lamb and Stratton built their LV Mini to be energy efficient, with a passive solar orientation, double-glazed windows, and 12 inches of insulation inside the walls and 14 above the ceiling. Even the crawl space is insulated. In-floor radiant heating is laid under a rubber-tile floor, a material that has the advantages of being a good conductor of heat and soft underfoot.

A few other changes to the LV Mini came from studying what others had done with their LVs. The couple found a helpful online forum and also visited two LVs, one in Maine and one in Massachusetts. In Maine, they saw an LV with aluminum window frames that had substantial cold transfer, so they opted for pricier fiberglass surrounds for their custom glass windows and doors. In Massachusetts, they saw a home whose clerestory windows did not open, which made the house uncomfortably hot, so they made sure their windows did not have that limitation.

To make space for visitors, Lamb and Stratton also redid their shed as a mini-guesthouse, which they rent out on occasion through Airbnb. The couple wanted to keep the look of the unfinished interior—just open studs and pine paneling, so one of their two builders removed the rotted wood, milled wood to match, then insulated from the outside and covered the building with cypress wood. The builder added two skylights and four new windows. The same corrugated aluminum used for the main house’s exterior was used for the roof. The builders added a bathroom, shower, and mini-kitchen, the latter consisting of a small refrigerator, a toaster oven, and a sink. Now a bunk bed (formed out of a loft bed and day bed) with Cuddledown linens occupies one wall. Folding chairs that can be hung on the wall and a flip-down table are in keeping with the efficient use of space.

“When you have small spaces, you can do better design,” says Lamb. “Even with the bunkhouse, we made everything look seamless.” Of course, she adds, a small space has to be in the right place. “The things around you have to contribute to the experience, not take away.” Sometimes people speak of “bringing the outside in,” when they are designing a house. With Lamb and Stratton’s LV Mini, the effect is almost the opposite. The house’s space seems to extend out into the cove, so stepping inside also feels like stepping outside. It’s as if the house existed simply to frame the exterior views, although, of course, the house’s true purpose is more expansive. The LV Mini, in this Maine incarnation, is an efficient, stylish space for living simply in the great outdoors.