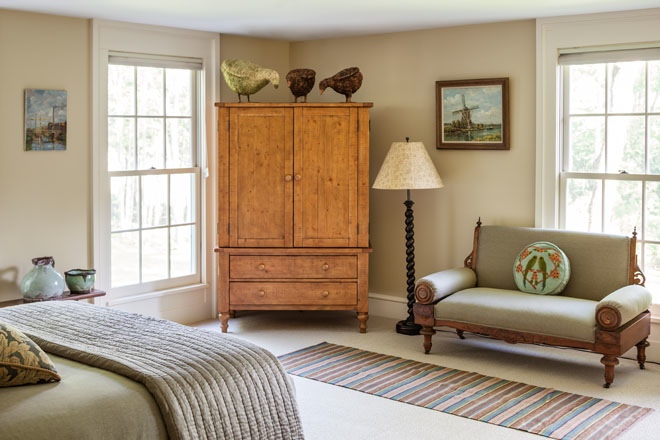 The master bedroom has a muted palette, antiques, a runner by Nicola’s Home, and a view of the Harraseeket River. “I find the house extremely soothing,” says the homeowner. “At the right time of the day there are seven or eight deer in the field or turkeys crossing through.” 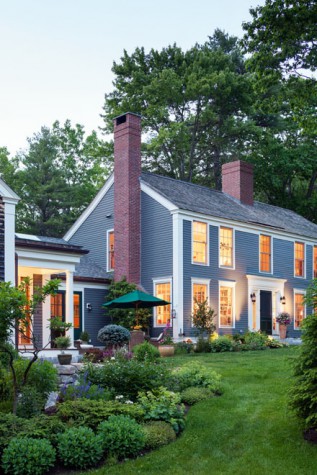 An addition where a breezeway once was now serves as a bridge between the living spaces in the main house and a new, expansive mudroom entry, the garage in the lower level of the barn, and an artist’s studio on the second floor of the barn. 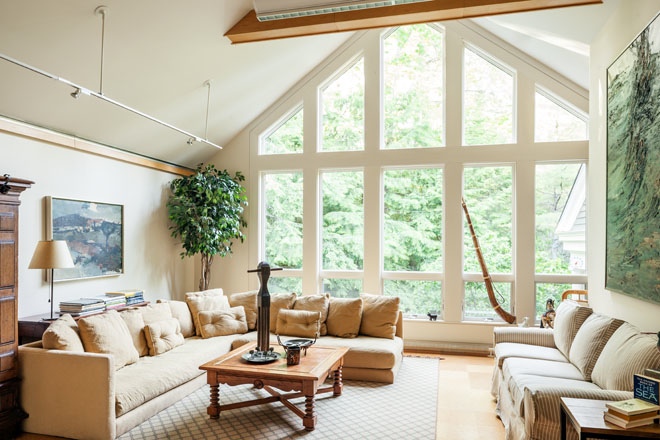 Above the garage is a studio and guest suite. The homeowner opened up the space so she could paint there; however, she says she finds more inspiration on the water at her downeast home on Great Wass Island. 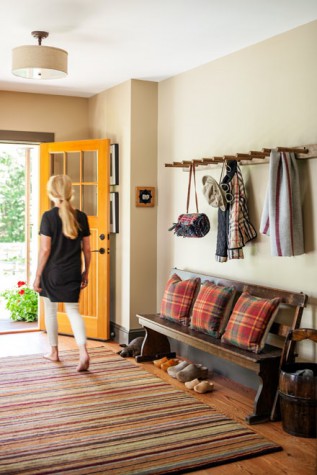 The mudroom was expanded to better relate to the rest of the house. An entry door by Simpson was custom designed so the six panes of glass in the door match the size and elevation of the panes in the full-glass sidelight. 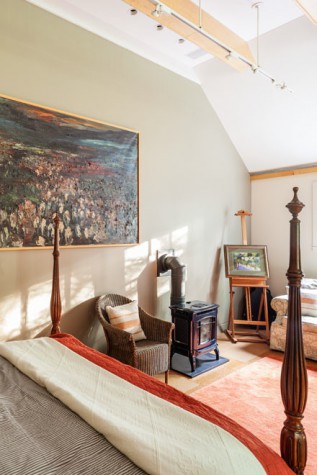 The guest suite in the studio apartment features a small stove. 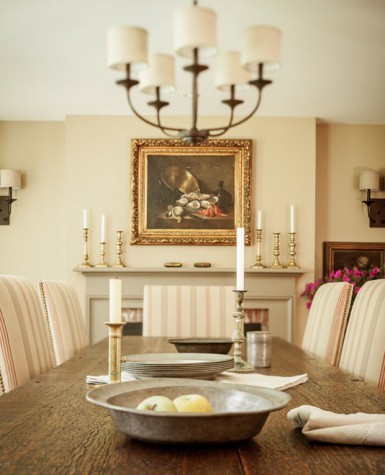 The dining table is a reproduction of a 1600s table that the homeowner has in another house. 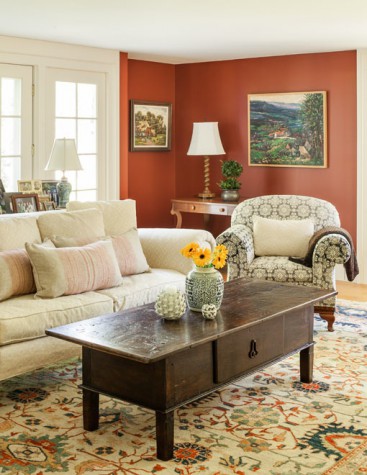 In addition to warm, deep colors, which she loves, the homeowner has decorated her home with antiques and art from Europe, much of it inherited from her father, who had an art gallery and whose house was “like a museum.” 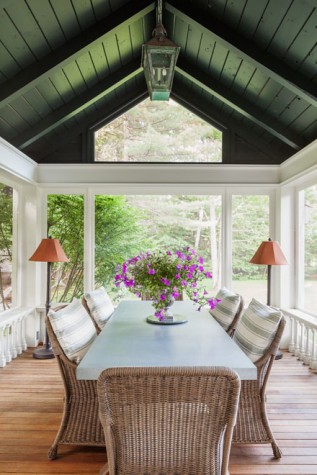 A screened porch lets in the breeze, as well as the view of a tidal marsh, without the bugs. 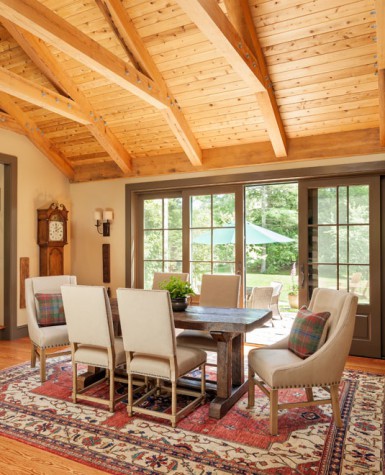 Central to the addition is its strong indoor/outdoor connection. A custom 12-foot sliding glass door by Marvin allows a seamless transition from the informal dining area to a patio designed by Susan Carter of Gnome Landscape, Design, Masonry, and Maintenance. 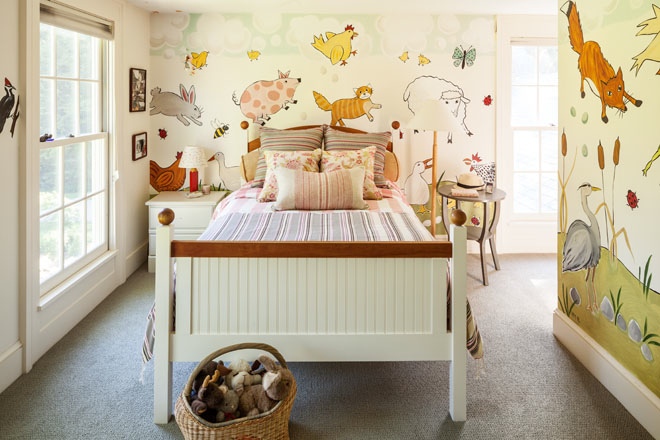 The original homeowners had one child, whom the current homeowner has watched grow up. When she moved into the house, she kept the mural in the child’s bedroom by local artist Heidi Gerquist, even though her own children are all grown. “I couldn’t change it; it’s priceless.” she says. Bedding is by Nicola’s Home. 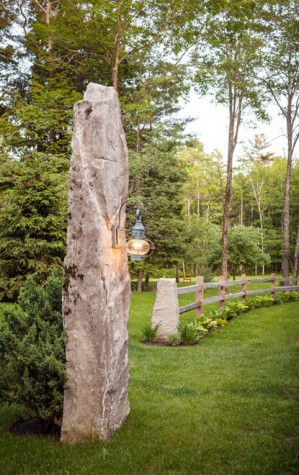 Guests enter the property down a beautiful wooded road with lighted granite posts leading the way. 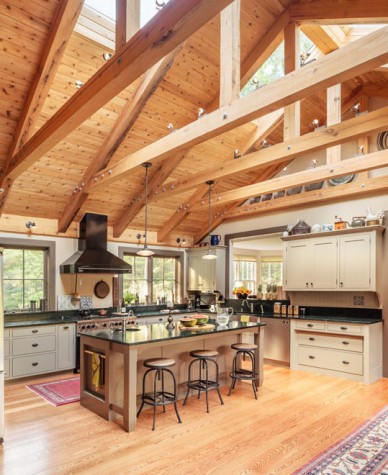 At the heart of the addition is a soaring kitchen (left) with high ceilings and skylights in a hybrid timber- frame construction. The homeowner chose black- green soapstone countertops by Morningstar Stone and Tile because, she says, “they don’t feel as hard as granite.” A carefully placed interior window opening over the apron sink allows guests to pass their plates from the dining room. Scott Stuart of Fine Lines Construction’s cabinet shop built the cabinetry. “A lot of effort was taken to make the cabinet design as functional as possible while maintaining a particular look,” says designer Mike Maines. A Viking range and cooktop are flanked by awning windows centered on the north wall. Ted Andrews talked the homeowner into a bigger stove to anchor the room proportionally. “It’s like a piece of furniture,” she says.

A classic colonial in Freeport gets an addition fit for entertaining.

Renovating—having an existing building to work with— can sometimes mean more of a headache than a head start. Although a blank canvas can lend a large amount of freedom to a designer, working within a tighter set of parameters can be a truer test of talent. This all depends on what you have to start with, of course.

If you’re Fine Lines Construction and you’re building an addition to a classic colonial designed in the mid-1990s by architect Ted Wengren, you’re starting with something that’s hard to improve upon. Set on 14 pastoral acres in Freeport where the Harraseeket River weaves through marshland, the house already had “a great canvas on which to work,” according to Ted Andrews, owner of Fine Lines. Maintaining the integrity of Wengren’s original design was paramount to the addition. “Ted’s extremely talented,” says Andrews. “The buildings told us what to do.”

In 2012 the homeowner, who grew up in Holland, purchased this secluded, private house with acres of land and trails and views. “Everyone told me, ‘This place is so much more you than the other one.’ And I think they’re right. It feels more European,” she says. With that European feel in mind, she sought a house reminiscent of an 1800s Dutch farmhouse. “In the olden days, people kept their cattle attached to the house, for shared warmth. That was my takeoff. I wanted a place of gathering and warmth.”

The main part of her home had a classic colonial look, balanced by a barn-like garage and studio. With its traditional center stair, the layout included a kitchen, dining room, and family room on one side and formal living room, first-floor bedroom, and screened porch on the other. The homeowner loved the house and its bucolic setting, but an open breezeway meant you had to walk outside to get to the garage and the studio apartment above. As an avid cook and the consummate host, she found the kitchen and mudroom a little on the small side as well. For this house to truly feel like home, she would need more space for cooking and entertaining.

Lead designer Mike Maines of Fine Lines (now with his own firm) was tasked with creating an addition that would be warm, spacious, and inviting and, most important, look like it had always been there. At the heart of the addition there would be a comfortable, hardworking kitchen that would work just as well for serious cooking and entertaining as for cozy family dinners and fireside chats. The first order of business was relocating the kitchen out of the footprint of the original house. By doing so, Maines was able to expand the family room and dining room on the left side of the center stair. “Our goal was to maintain the original look while rearranging spaces and adding square footage,” he says.

The addition—a great room where the breezeway once was, with a kitchen, dining area, and sitting area with fireplace—now serves as a bridge between the living spaces in the main house and a new, expansive mudroom entry, the garage in the lower level of the barn, and an artist’s studio on the second floor of the barn. It also balances the traditional, elegant colonial-style main house interior with the informality of the barn and studio. “We wanted the house to look settled—to have no hiccups between one era and another,” says Andrews.

The new space, with high ceilings and skylights, features an unusual hybrid timber-frame roof construction. The timber trusses are structural, with concealed metal plates at each joint, which keep the walls from spreading. The dimensional rafters are not entirely outside of the timber frame but overlap with the timber rafters. “A structural ridge beam would have protruded too far down into the room,” explains Maines. And since the homeowner wanted some natural wood texture, Maines designed and built structural trussesfromreclaimedheartpinewith custom hidden metal hardware (except for exposed bolts). “To tie in with the existing room we had to design some tricky framing,” says Maines, “which our foreman, T.K. McBride, pulled off beautifully.” The walls and floors are conventionally framed.

“This was a practical way to meet the homeowner’s requirements for an open plan and lots of space while still feeling cozy and bringing in some rustic, barn- like elements,” says Maines. The rafter ties bring the scale of the space down, creating a visual plane at about 10 feet above the floor. The rough-sawn reclaimed Southern pine trusses add an elegant but informal look that would be hard to achieve with new lumber. “Mike and I have very similar tastes,” says the homeowner. “He was a great listener and a good arguer, when necessary.”

Off to the side is a cozy sitting area with a brick fireplace designed by Fine Lines and built by Rick Leech Masonry that was inspired by the homeowner’s trips to Italy, where the hearth is the centerpiece of the kitchen and used for both warmth and cooking. “I wanted a space that feels good when I’m sitting here by myself or when filled with people,” she says. “And it’s perfect for entertaining. It’s really easy to cook with several people; everyone has their own work space.”

Central to the addition is its strong indoor/outdoor connection. With ample windows on the north side, the kitchen is extremely bright, which only enhances the darker, more traditional European colors the homeowner chose throughout the house. Additional daylight comes in from four skylights and a custom 12-foot sliding glass door on the front, leading to a patio designed by Gnome Landscape, Design, Masonry & Maintenance of Falmouth.

When it came to the lighting, the homeowner also took cues from her childhood in Europe. “In Holland and Germany and France, everything is low-light and cozy,” she says. “I would live by candlelight if I could. It was important to me that my lighting be warm and muted, so every single light switch is on a dimmer.” Because of her disdain for recessed lighting, the team, which included electrician Tom Poulin, minimized its use, with low- voltage sconce lighting along the range wall, LED undercabinet lights (including one tucked in front of the appliance garage) in the kitchen, and uplighting on the rafter tie beams. “It was a complicated place to light,” says Andrews.

Inside the new space, dinner parties are frequent these days. Unlike many people who tense up at even the thought of entertaining, the homeowner is at ease as a host. She says it helps to have a routine down pat. “If I’m having a party on Saturday,” she says, “I like to shop Friday during the day. I then start cooking Friday afternoon into Saturday. I am not good at starting a meal when people are here because I get too distracted and I start forgetting things,” she laughs. Her style of cooking—like her style of entertaining—is more rustic than fussy, with one strict rule (okay, maybe two): “I don’t do potlucks,” she says. “When you come to my house, I cook for you. And you don’t do the dishes, either.” If mastering the art of entertaining means putting your guests as ease, then she goes above and beyond. Just like her new soaring kitchen.