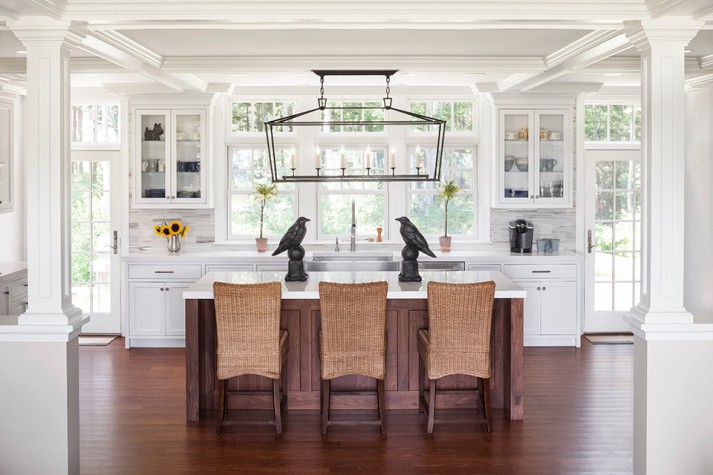 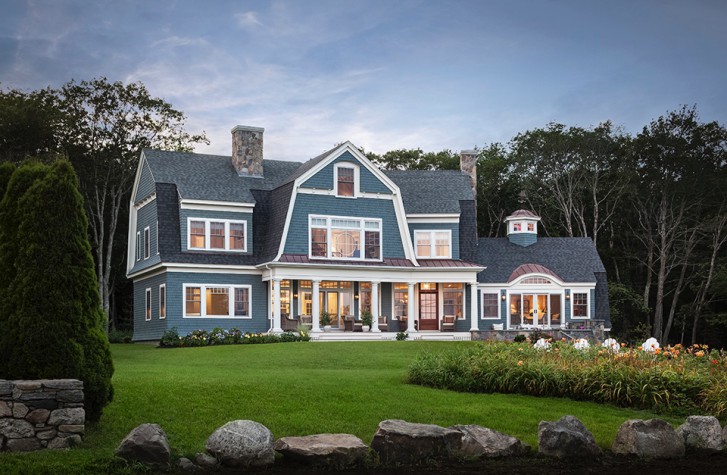 This house across from Walker’s Point in Kennebunkport was built by Bowley Builders and designed by Graham Architects in collaboration with Reilly Design. Kris Lagasse did the landscaping. “The gambrel roof softens the edges a bit,” says David Graham. “Rather than that second floor coming right at you, it eases back, giving the house a more grounded feeling.” 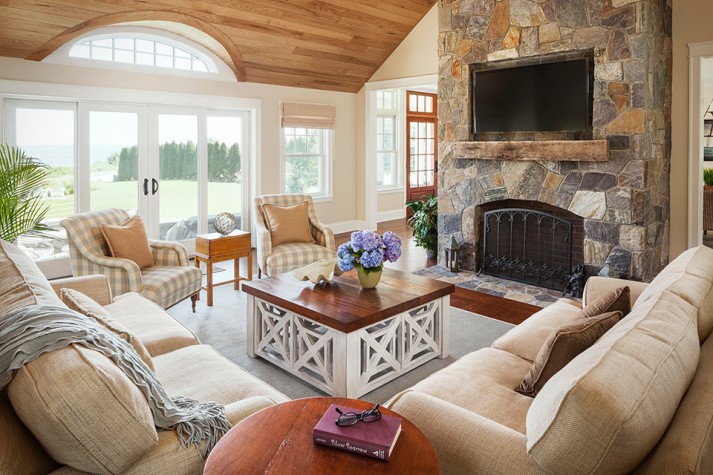 The family room above the garage, which the homeowners call the great room, features a butternut vaulted ceiling, stone fireplace, and comfortable furnishings. The room was designed and angled to take advantage of a view corridor to the open ocean. 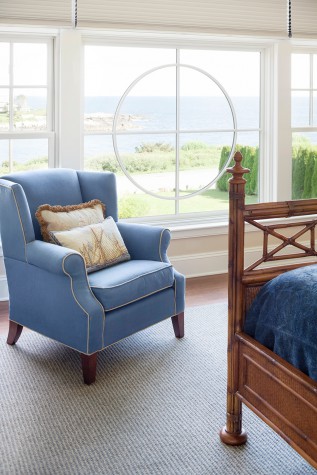 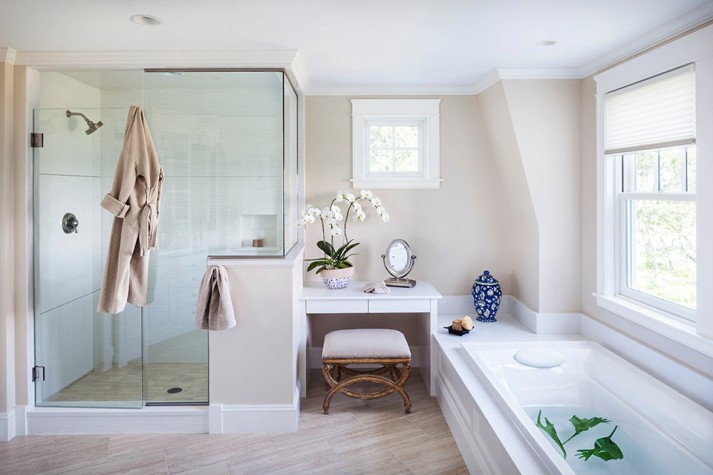 Homeowner and interior designer Kathy Brodowski hand-selected tile for the bathrooms, each one different but of a piece with the rest of the house. 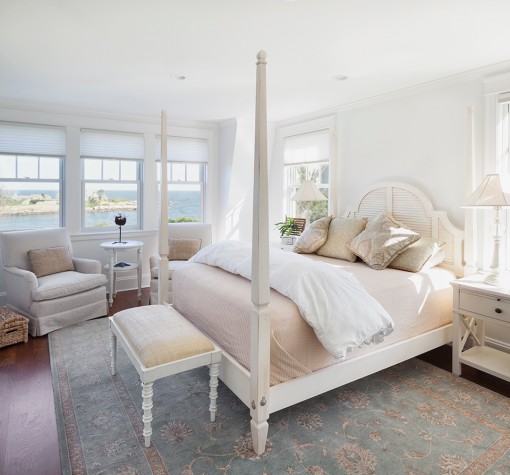 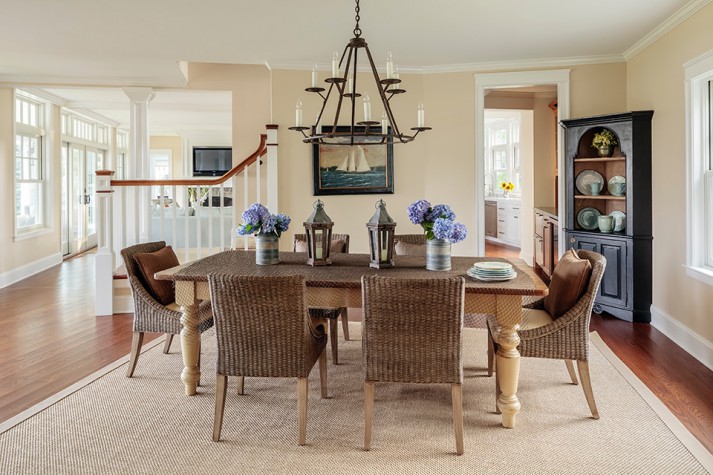 An open-concept first floor was important to the Brodowskis, who like to entertain. “We wanted good flow,” says Alex. 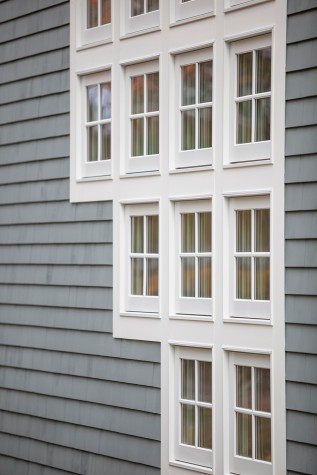 The fine craftsmanship of Bowley Builders is evident in details like the fenestration on the back side of the house. 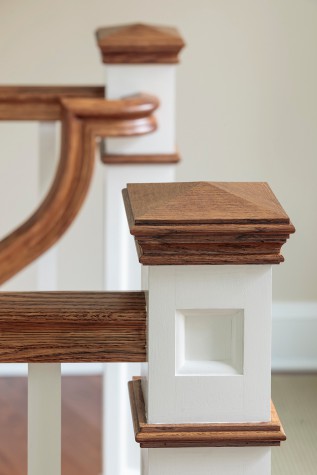 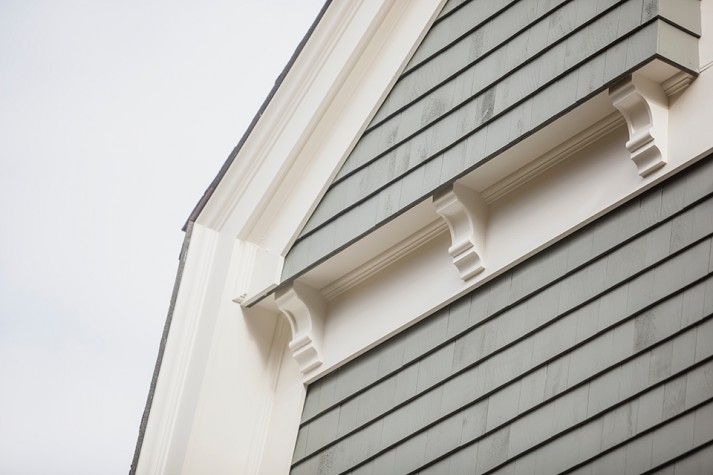 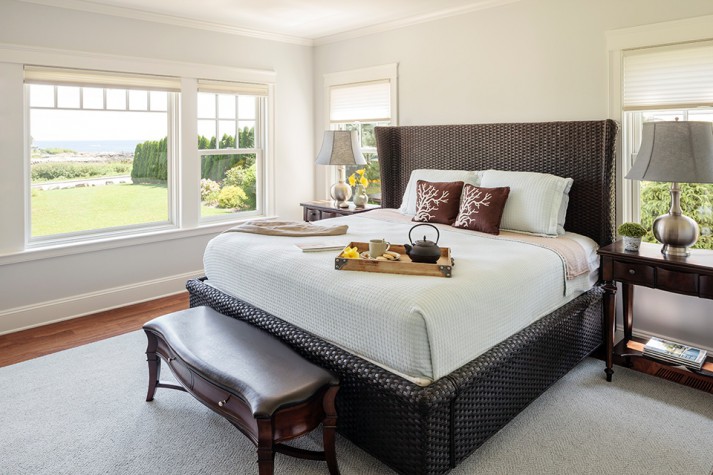 The Brodowskis added a bedroom on the first floor after renting for many years and learning the importance of a ground-floor guest room. 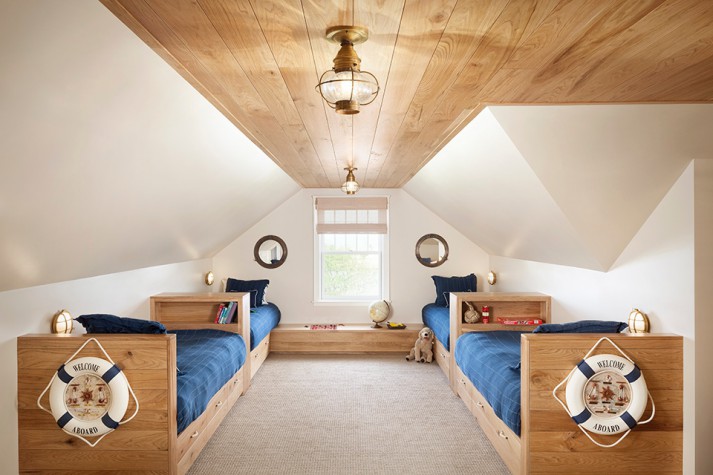 A third-floor bunk room has a ship-like feel and sleeps six comfortably, with room on the floor for more to camp out. 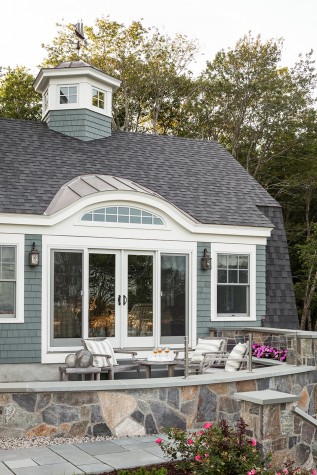 A stone patio off the family room in the front of the house welcomes visitors to immediately enjoy the outside upon arriving.

ACROSS FROM WALKER’S POINT, A SHINGLE-STYLE HOME SERVES AS A GATHERING PLACE FOR FAMILY, AND MEMORIES

Katy Brodowski’s presence remains in her house the way the sun illuminates even a cloudy day. It’s in the comfortable furniture she selected that guests to sink in and relax. It’s in the painting an artist friend made her with a Scottish terrier (Kathy’s favorite) in the corner. It’s in the rich, textured tile she hand-picked for every bathroom, each one different but of a piece with the rest of the house. It’s in the wood floors in the kitchen that she convinced her husband, Alex, would be just right. It’s in the third-floor bunkroom where her four adult children can camp out with friends (and someday, maybe, children of their own). It’s in the way the home begs all who enter it to enjoy the ocean view Kathy loved into her last days.

Kathy and Alex grew up summering on the Jersey Shore, but turned their eyes toward Maine on a tip from one of Alex’s colleagues. They visited Cape Elizabeth first, before making their way down to Kennebunkport and falling in love with the area. For years they rent- ed, bringing family and friends up to join them. “We felt very comfortable here,” says Alex. “People were much friendlier, the summer was less crowded, and the area was as beautiful as any beach area we had ever seen.”

Over their years together, Alex watched Kathy’s love for interior design bloom from a casual hobby into an all- out career. When they were building their first home in Baltimore more than two decades ago, she worked closely with their interior designer and builder to put her own touch on it. When they moved to New Jersey, their new home was just a shell on the inside—the perfect blank canvas for Kathy to try her hand at selecting paint colors, mould- ings, tiles, flooring materials, finishes, furniture. The more she dug in, the more she craved. By day, she was a stay-at- home mom of four kids; by night, she was a student taking classes in interior design. She spent the next several years building up a clientele of friends and family, but a cruel twist in face, just when she was ready to really launch her business, she was diagnosed with lung cancer.

Her last project was perhaps her proudest – her family’s own Kennebunkport home, a stately shingle-style house across from the Bush compound on Walker’s Point. The original house on the site was an 1,800-square-foot salt- box with three small bedrooms and one bathroom. Bowley Builders in Kenne- bunk helped the Brodowskis renovate in the short term, with a long-term plan to eventually rebuild into a larger home that could accommodate their entire family.

If it was an advantage for the Brodowskis to become familiar with the property before building a new house there, it was even more so for builder Geoff Bowley, who had become intimately acquainted with the site’s natural features over the years—as well as its challenges. “I can remember walk- ing the property with Geoff and his dad when we were working on the first house,” recalls Alex, “trying to figure out just what to do.”

“Stiff setback issues” were at the core of the project, according to architect David Graham of Graham Architects. In addition to the standard shoreland zoning restrictions, the team also had a ravine to contend with, which came with its own 75-foot wetland setback. In col- laboration with New Hampshire–based designer Ron Reilly, Graham worked to unravel the tangle of zoning restrictions to situate the house so that it also made sense on the land while maximizing the stunning ocean views. “There was a specific view corridor we were trying to take advantage of,” explains Graham. “We wanted to be able to look out at the ocean past a row of trees on the property line, while not staring directly at the Bush compound.” This view corridor drove the angle and shape of the house as a whole. By utilizing the footprint of the existing house, the team was able to work around the restrictions. “We came up with a design that used the existing garage location and turned it into a great room with two-car garage underneath.” The new design also takes advantage of the prominent elevation, lining it up with Ocean Avenue.

While the site dictated the shape of the house, the Brodowskis worked with Bowley and Graham to determine its size, intentionally scaling it back during the design process. “We wanted a space that was manageable, not colossal, but just large enough to entertain visiting family and friends,” says Alex. Even more important than size was layout: an open-concept kitchen, family, living, and dining area on the first floor allows for big gatherings with “good flow”—an item at the top of Alex and Kathy’s list. An open, ample kitchen anchored by an island built by cabinetmaker Derek Preble faces an intimate sitting area that overlooks the water. Both sides of the house are lined with large windows further extended by transoms that let in loads of natural daylight. The setup means no separation between hosts and guests, and room for everyone to congregate comfortably.

Since the house was envisioned largely as a summer gathering spot, a traditional main front entry with the typical foyer and mudroom was eschewed in favor of a simple front door that lands guests directly in the dining room. “We played around with several schemes of where to bring people in,” says Graham. Ultimately the team decided that a stone patio outside the great room and curved stone steps at the front of the house would serve as a natural entrance point. “It’s like an invitation to guests: ‘It’s summer, we’re outside enjoying it, come up and enjoy it with us,’” says Graham.

When the family isn’t outside on their deck watching the waves crash against the rocks or the cars driving by Walker’s Point hoping for a glimpse at the presidential vacation home, they’re inside enjoying the coziness of Kathy’s nautical palette. In the great room (if you can take your eyes off the best view in the house), the butternut paneled, vaulted ceiling, stone fireplace, and wall of built- ins imbue the space with warmth. Upstairs bedrooms face the ocean, and a third-floor ship-inspired bunkroom houses overflow. Bowley’s craftsmanship brings Kathy’s eye for finishes to life. From New Jersey, Kathy would send Geoff lighting fixtures or stone she found for him to incorpo- rate. “We’ve dealt with builders in oth- er places,” says Alex, “but with Geoff, you feel like you’re working with your brother. You can’t find a place in this house where there isn’t some detail, or little touch, that makes you feel right at home.”

After Kathy passed away, Alex toyed with the idea of selling the house, worried that it might be too painful to go back to it. His kids talked him out of it. “I thought they were going to tar and feather me,” he says with a laugh. “‘No way,’ they said. “‘That’s Mom’s memory—our memory.’” Last summer was the first without Kathy. The Brodowskis had close to 20 people in the house, between Alex and his four kids, Kathy’s brothers and their families, and the great aunts, not to mention a couple dogs. “It’s now our annual family reunion,” says Alex.

What better place for a reunion than the house that honors the memory of a wife, mother, daughter, sister, friend— someone who spent her life bringing beauty to everything she touched.