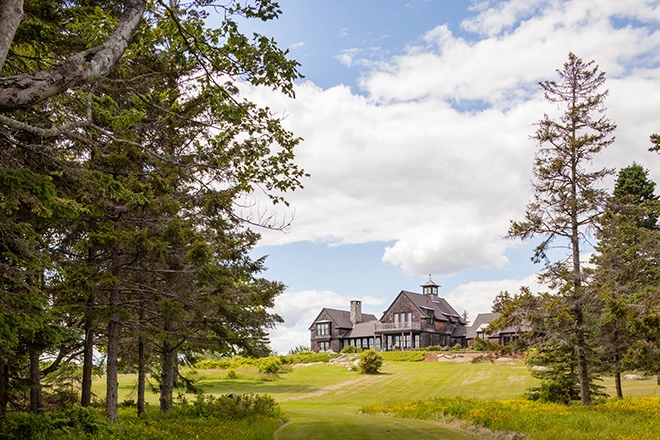 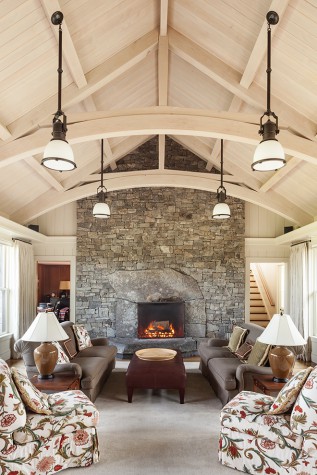 Wellesley, Massachusetts, architect John Chapman designed the great room’s weathered granite chimney, and Hilt Masonry in Rockport constructed it. The slab formation around the firebox was inspired by a photo the couple saw of Camden architect John Morris’s fireplace. Rockport Post and Beam supplied the ceiling trusses, which are staggered with Visual Comfort cargo pendants. 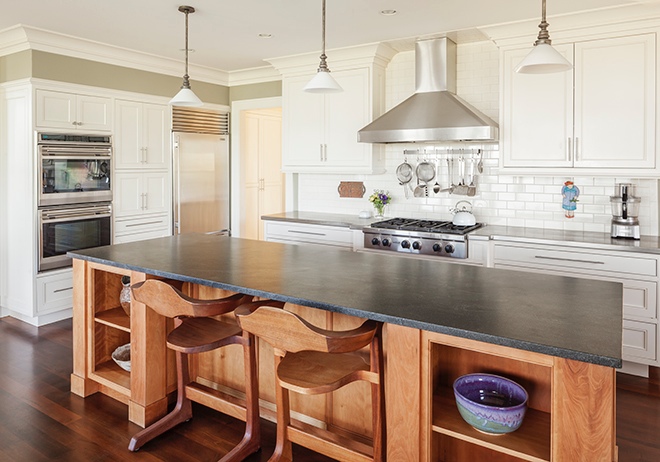 There’s a yin and yang quality to the kitchen, with its mix of bright whites and warm woods, including roasted birch flooring from A.E. Sampson and Son in Warren, a cherry island, and sculptural mahogany stools by Joseph van Benten Furnituremakers. The jet mist granite counters are from Morningstar Stone and Tile in Topsham; Pendleton Builders in Hope crafted the cabinetry. Note the drawers that resemble flat files: “They enable you to see a lot of tools and utensils at once,” says Barbara. 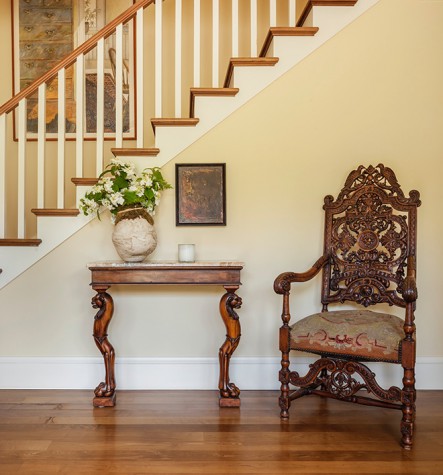 In the entryway, viburnum appears to grow out of Elizabeth Strasser’s ceramic vase, which conjures a moss-covered stone. Walter’s mother bequeathed the antique carved wood armchair and Peter Thomas drawing in the stairwell. The oil painting, I Look to See Each Day, is by Olivia Janna Genereaux. 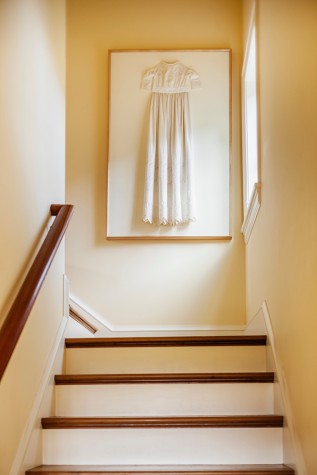 Barbara collects antique christening gowns, some of which are displayed in the stairwell that leads to her studio. 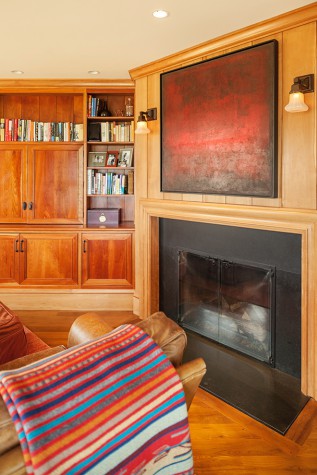 Marsha Skinner’s radiant oil painting stands in for a roaring fire in the den. 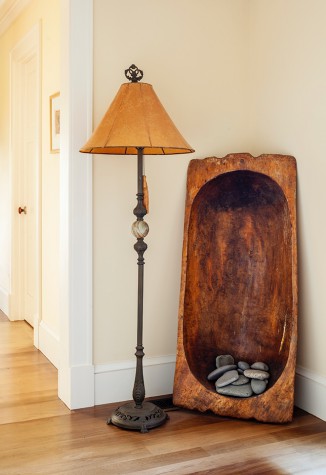 A giant dough bowl from Elmer’s Barn in Coopers Mills once served as a “boat” for the Reitzes’ nieces and nephews; now it showcases stones in a downstairs hallway. 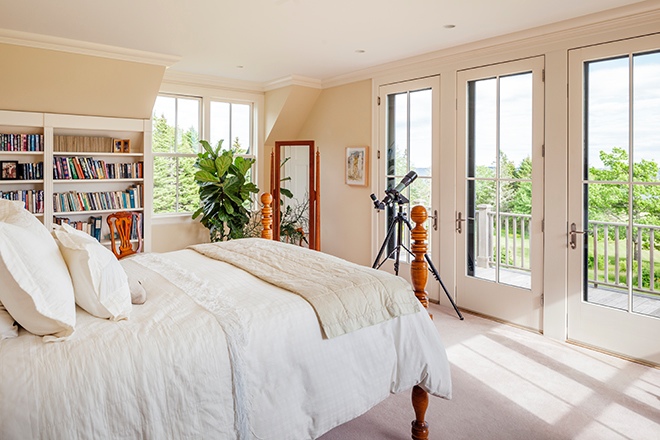 The owners’ suite, ensconced in its own wing on the second floor, is furnished with an antique bird’s-eye maple bed and mahogany mirror by Joseph van Benten Furniture makers. 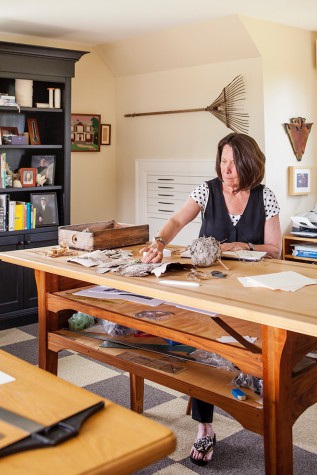 Barbara at work in her bookmaking studio. 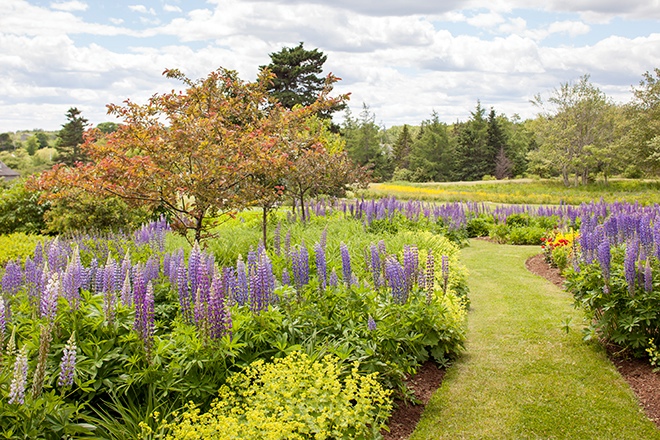 Miss Rumphius, one of Barbara’s favorite children’s books, inspired the lupine garden that borders the driveway. 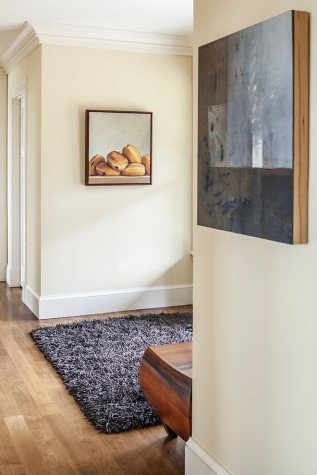 Barbara loves the “human quality” in Emily Eveleth’s doughnut painting, which hangs in the foyer. “It’s like they’re a little family hugging and kissing,” she says. The abstract work in the foreground is by Dorothea Van Camp. 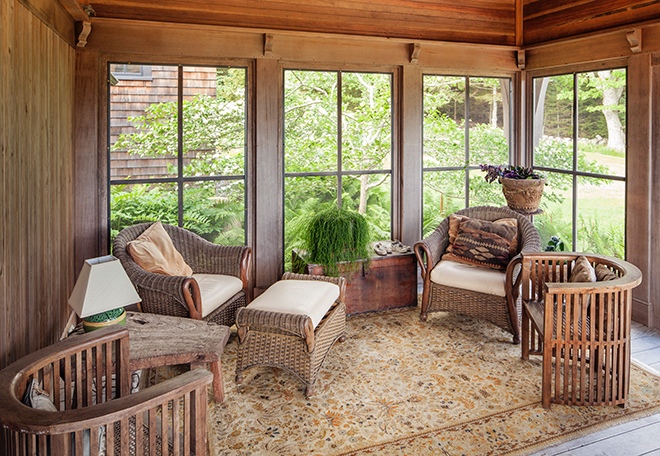 The cherry-paneled screened porch looks out onto a “secret garden,” tucked into a corner on the eastern end of the house. The flooring is Ipe and the furnishings are teak. 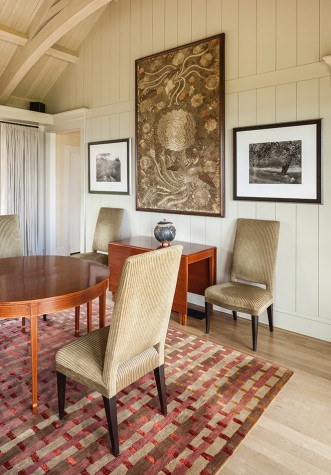 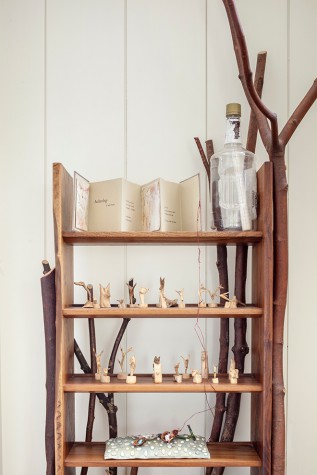 In an alcove, a bookshelf accented with tree limbs—the work of Wayne Hall in Bucksport—holds an artist’s book, wooden figures, a fabric sculpture, and a message in a coffee brandy bottle Barbara found on the beach. 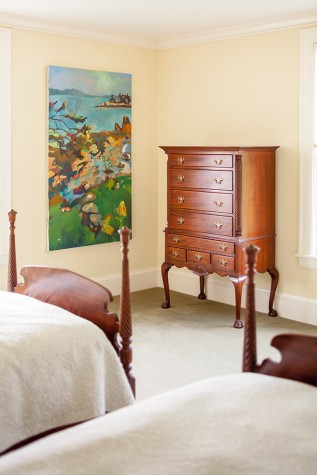 A five-foot-tall oil by Anna Kriger, whom the Reitzes hosted as an artist in residence, captures the view from a guest bedroom. St. George ceramicist George Pearlman’s elaborately glazed jar has pride of place in the great room. 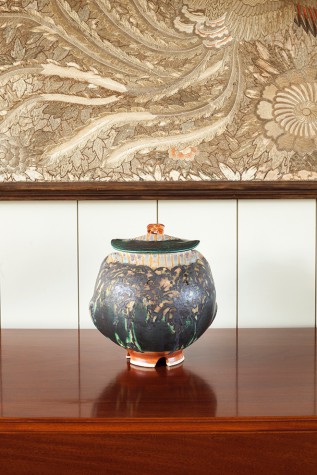 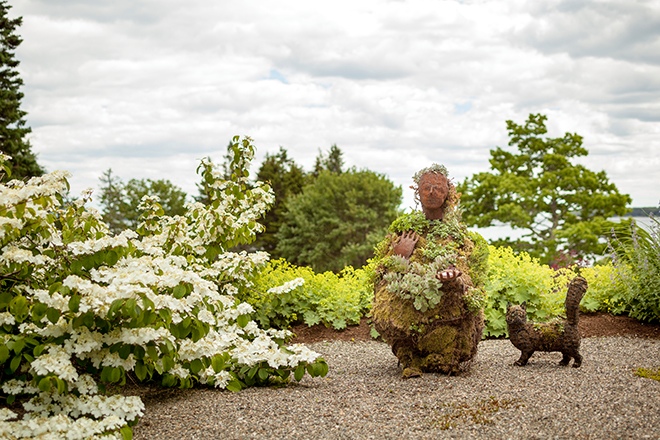 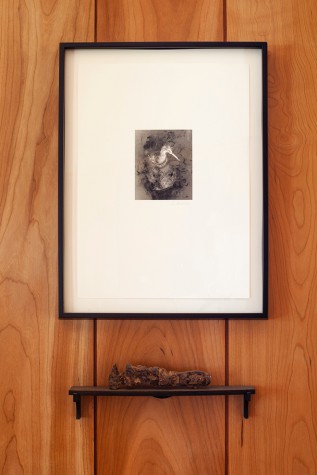 In the den, Constance Jacobson’s bird-like digital print hangs above a rusty wrench Barbara unearthed in the garden—“they seem like happy companions,” she says. 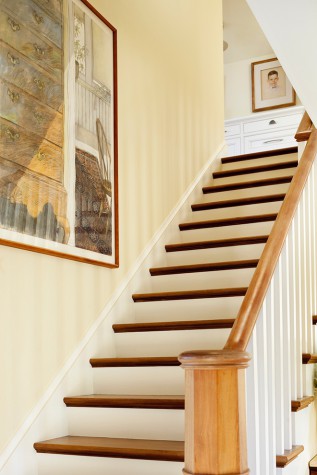 The main staircase features an octagonal newel by Tidewater Millwork in Woolwich; upstairs is a pastel of Walter as a boy by Jean Reasoner Plunket.

When you visit Barbara and Walter Reitz’s South Thomaston home, you’ll want to touch the art. In the entryway, a pillowy mound of jelly doughnuts, captured in absurdly tantalizing detail by Emily Eveleth, appears poised to topple out of its canvas in offering. In the great room, myriad minute silk threads converge in a seven-foot-tall embroidered tapestry depicting a swirling bird-and-botanicals scene. Upstairs, there are Sandy Weisman’s Abutters, a woven paper work with thick patches of loose strands that resemble fields wind-blown in different directions, and an acrylic diptych by Paul Shakespear that is part wood, part rough corrugated metal. Your chance to participate comes when you round the corner by the side staircase. There, on a small bookshelf, is a collection of smooth wooden animal figures by Ruvim Mogendovich, an accordion artist’s book by Weisman, and an intricate fabric sculpture by Sharon McCartney—a sensory smorgasbord, in other words, that is best examined by hand.

“I’m drawn to pieces with layers and lots of refinement,” says Barbara, holding up McCartney’s painted, pebble-studded pillow that serves as a bed for twigs decorated with beads, thread, and chestnut-pod nests. Barbara’s own work as a bookmaker features a similar mix of ornaments and found objects. On a long table in her studio above the garage, boxes brim with all manner of miscellanea—beads, buttons, empty amber-stained tea bags, costume jewels, freshwater pearls, shells, sea glass, stones, snake skins, lichen, honeycomb, coiled bark, bug cadavers, and bits of rust. A trio of wasps’ nests, their mummy-like wrapping partially dismantled, dots the windowed wall behind. Collages of such treasures grace the covers of Barbara’s archival journals, composed of finely textured cotton paper encased in handmade cloth bindings. “I view the books as a place to record ordinary events, which, in their accumulated form, become something important,” says Barbara, who is represented by Handworks Gallery in Blue Hill. Fearful of putting pen to such exquisite paper? “I tell people to write a grocery list on the first page—then the book is yours and it feels less precious,” she says.

Barbara collects most of her material on the 40-acre property she and Walter purchased in 2000 and built on six years later. The Massachusetts couple knew they’d found The Spot for their retirement home the moment they saw the land, then a working sheep farm, comprising tree-ringed fields sloping down to the sea. Drawn to the wide-open water views and reasonable drive from the Boston area, where their 29- and 33-year-old sons and Barbara’s family live, they quickly made an offer. “Our boys have a habit of leaving the city at 8 p.m. and rattling in here around midnight,” says Walter. The agricultural aspect also resonated with Barbara, whose parents owned a farm now operated by her brothers. When negotiations with the previous owner stalled, Barbara drove up to meet with her alone. “I felt that, as a farmer’s daughter, I could talk to her,” she says. “I conveyed our feelings of stewardship for the land and invited her to stay for a few years while she built another home. We wrote a purchase and sale agreement on a napkin, and the brokers came later and made it official.”

Initially Wellesley, Massachusetts, architect John Chapman proposed building close to the water. But the owners wanted the home to be less obtrusive, and he soon came around to their way of thinking. “Conceptually, in my mind, this became Christina’s World, with a rolling meadow leading up to the house in the background,” he says. They settled on a spot midway between the shore and the original farmhouse, which the Reitzes later sold, along with three acres, to their close friend, artist Sandy Weisman. She in turn donated the home to the fire department for a controlled burn, erected a new structure, and opened an artists’ retreat (26 Split Rock Cove) in an accompanying four-bay garage, where Barbara now teaches. Still, there’s a prevailing pastoral quality to the land, which locals continue to call “the sheep farm.” “South Thomaston is a modest community, and the farm was a fixture here,” says contractor Don Pendleton of Pendleton Builders in Hope. “The way the buildings are situated is very tasteful, and warranted by the land.”

Chapman designed the home in the shingle style, a genre as synonymous with the Maine coast as fog and granite ledges (and almost as inconspicuous). The body of the structure is H-shaped, with the foyer, kitchen, library, and a guest bedroom arranged on either side of a soaring great room Chapman dubbed “the big tent.” “I felt strongly that the space should be transparent, with long banks of windows on opposing walls, both to create a communal feeling and to link the home with the landscape,” he says. A smaller “H” extends out to the east and encompasses a mudroom and utility spaces. “The concept is similar to that of a connected farmhouse, which gives the home some historical presence, as if it has been added on to over time,” says Chapman.

The Reitzes had been referred to Chapman by Linda Banks, owner of Simply Home in Falmouth, who renovated their previous house in Sherborn, Massachusetts. When it was time to decorate the new place, Banks paired them with Pat Fortunato, then a senior designer with the company. Fortunato helped Barbara repurpose furniture and conceived a lighting plan and palette for the whole house. The tranquil gray, taupe, and sage green room colors were pulled from the lichen-covered stones that dot the property, many of which are assembled en masse into the great room fireplace—a veritable fortress on the far wall. The paneled walls and trim in the room are coated in Benjamin Moore’s Grant Beige, and the ceiling and arched trusses feature a wash of the same shade, imparting a cocoon-like feeling to the lofty space. The monochromatic scheme also ensures that nothing “stops the eye” when you take in the seascape outside, says Fortunato.

The great room’s antique Asian tapestry was the couple’s first art acquisition. Purchased from friends 30 years ago, the embroidery has hung in three of the Reitzes’ homes. “We bought it before we even had a sofa for the house we’d just moved into,” says Barbara. “The precision and organic nature of the work captivated me, and I knew I could live with the muted colors for a lifetime.” In the ensuing decades, the couple has amassed pieces by friends—there are 10 each by Weisman and potter-painter Elizabeth Strasser, including a watercolor in the downstairs hall that portrays a whorl of freeform shapes reminiscent of Kandinsky’s Composition paintings. The Peter Thomas landscape drawings in the owners’ bedroom and still life of sunlit rooms in the stairwell are from Walter’s mother’s collection. Other finds, such as the library’s abstract oil by Marsha Skinner, with its layers of luminous reds, and an adjacent etching of a melancholy old soul by Leonard Baskin, were fortuitous. “Visiting galleries and seeing what speaks to us is one of our favorite pastimes,” says Barbara.

A walk through the Reitz home inevitably winds up in the kitchen, where Barbara, an avid cook, likes to spoil her guests. (On the menu the day this reporter visited: eggnog lattes, a red pepper and onion tart, and apricot squares.) There, on a windowsill near a hanging tableau of Weisman’s collages and McCartney’s decorated cushions, is a pod-shaped fabric charm. “You hold it and it feels like your day got better,” says Barbara of the seed-filled pouch from McCartney’s Amulet series. Kneading the little pillow is soothing and a wonderful distraction for the hands—it’s just the thing you should ask for at the start of your tour.