Music in the Making 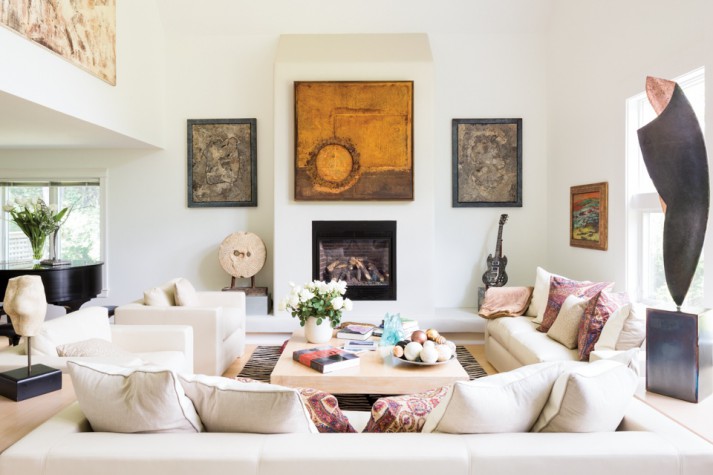 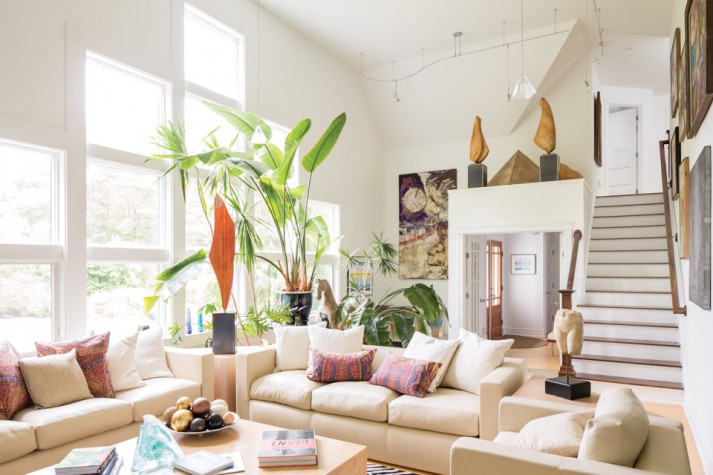 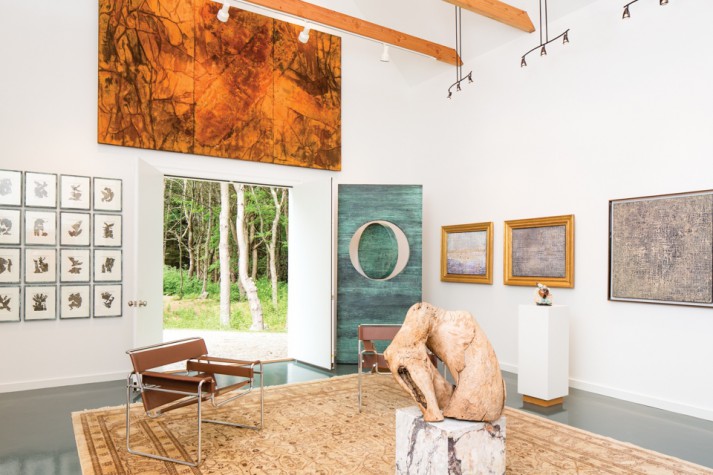 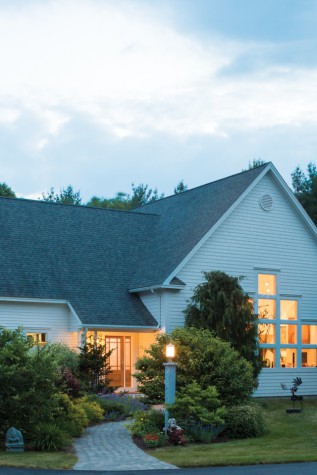 The house has a double gable and a wall of windows in the living room. 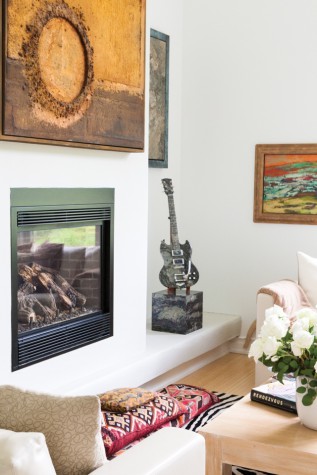 Dan Crewe envisioned a space that looked like a New York loft for the interior of his home, which is now full of both the art that he has collected over the years and art by his brother, Bob Crewe. The pieces to the left and right of the fireplace are tree slices that Bob painted over. The piece above the fireplace is also by Bob; circles are a recurring motif in his work. The white furniture is J. Robert Scott. The sculpture at right is by Robert Lash of Gardiner, and the stone Stratocaster guitar to the right of the fireplace is a sculpture that Dan Crewe commissioned from stonecutter Josh Frey. 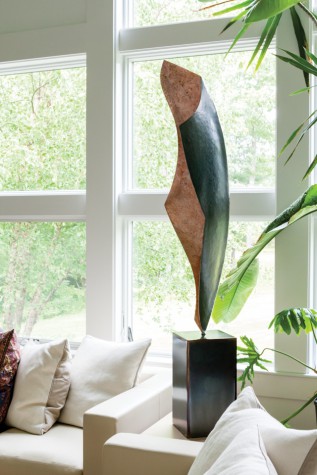 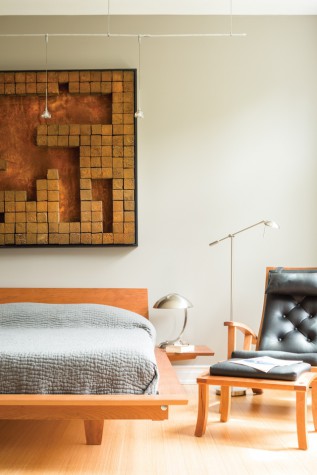 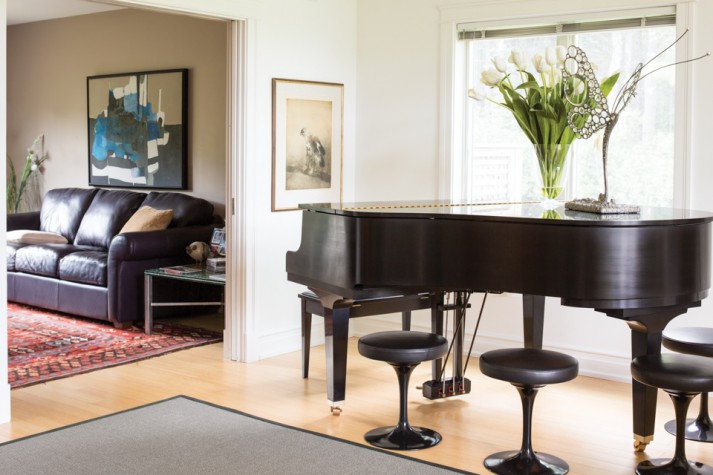 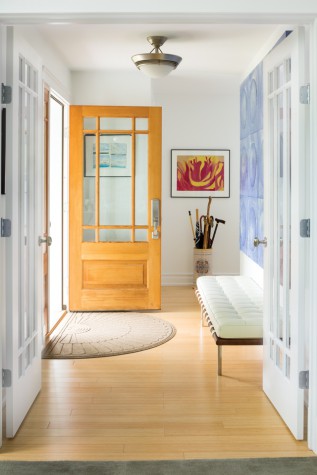 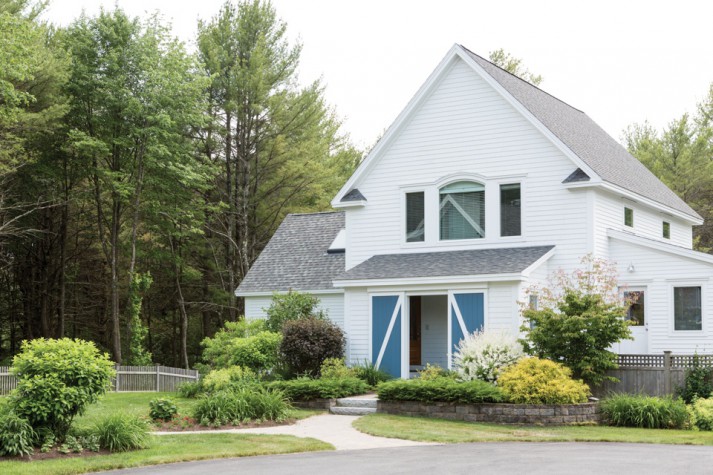 Building designer Kathy Joiner of Joiner Design in Lewiston, builder Craig Cooper of Rainbow Construction in Cape Elizabeth, and Dan Crewe collaborated on the design of the art barn and this guesthouse (above). “We wanted an accessory building that wouldn’t overtake the primary home,” Joiner says. “The sliding doors on the front are to downplay that it is a house.” 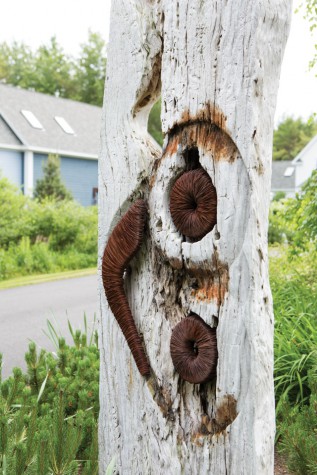 A Bob Crewe creation made of wood with embedded metal. 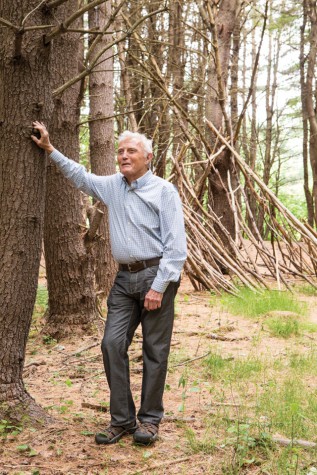 Homeowner Dan Crewe standing in the forest that surrounds his home. Twenty-one acres of his original 33 acres in Cumberland now form the Jessie Bullens-Crewe Nature Preserve, established in memory of his daughter, who died of complications of Hodgkin’s disease when she was 11. 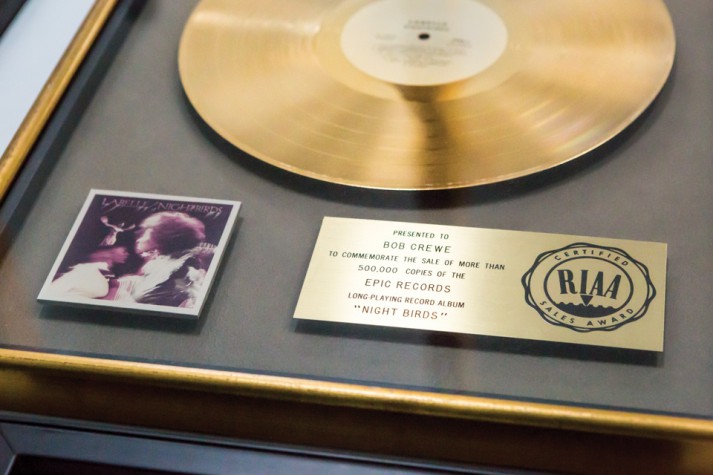 A gold record for Bob Crewe and Labelle’s album Nightbirds. 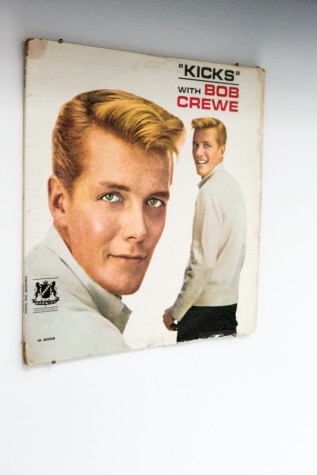 A cover for Bob Crewe’s album Kicks, showing Bob as a young man 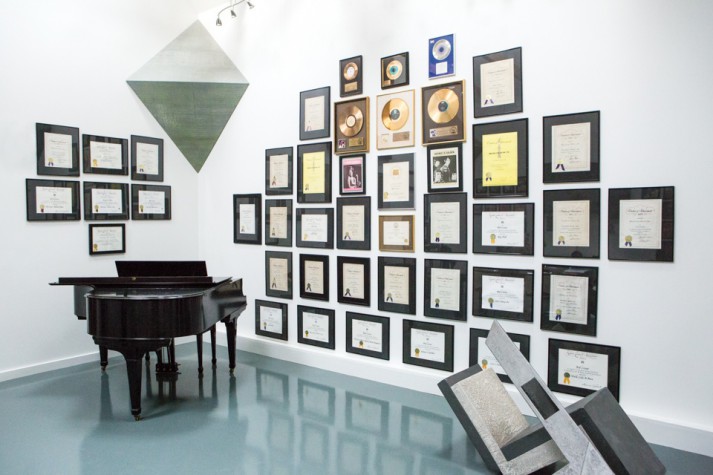 A room full of music memorabilia, including the piano on which Bob Crewe wrote many of his hits and a wall of gold and platinum records and certificates of achievement. 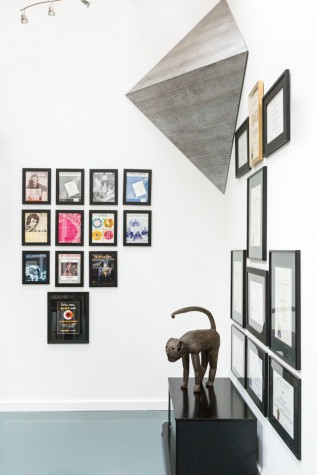 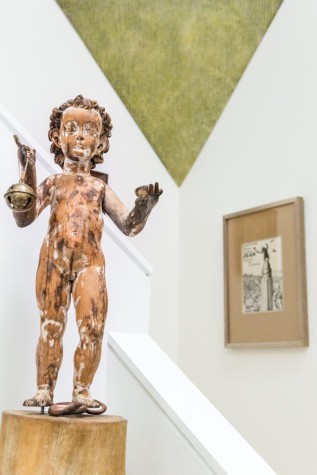 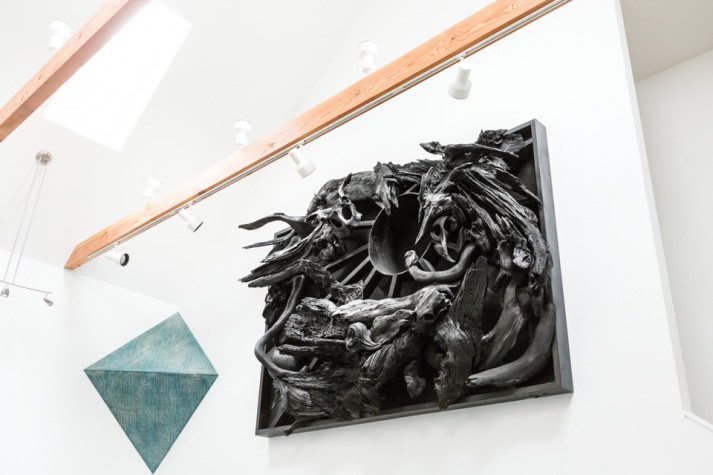 A triangular sculpture and a black sculptural painting made of driftwood 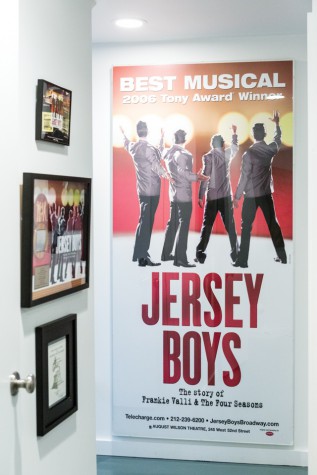 The side entry into the art barn displays memorabilia from the long-running Broadway musical Jersey Boys, which tells the story of Frankie Valli and the Four Seasons. 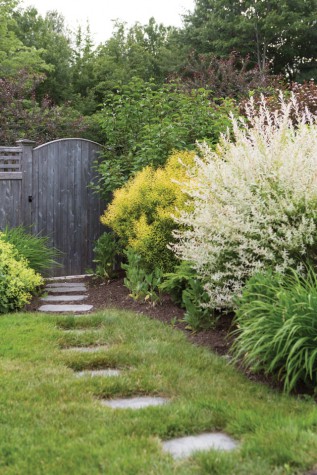 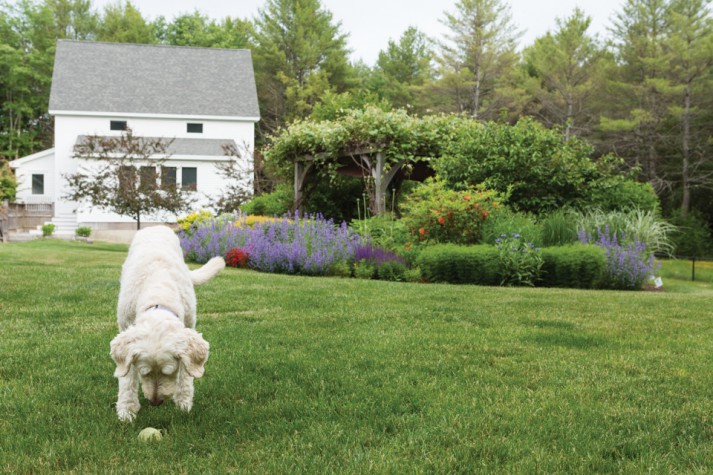 Philanthropist Dan Crewe’s life has been one of enormous highs and lows. If you’re not particularly plugged in to the music world, you might not think you know about the highs. But you do—or at least you’ve heard their results. For decades, Crewe was in business with his brother, Bob Crewe, legendary record producer for the Four Seasons and coauthor of hits like “Walk like a Man,” “Big Girls Don’t Cry,” “Can’t Take My Eyes off of You,” and “Devil with a Blue Dress On.” You could spend a long evening listening to Bob Crewe songs and realize you recognize every single one. Or you could fly to New York City and get a ticket for Jersey Boys, the long-running musical about Frankie Valli and the Four Seasons, and come to the same realization.

A brief version of Dan Crewe’s pre-Maine years goes like this: boyhood in New Jersey, education at the U.S. Naval Academy, years in the service, partnership with brother in rock and roll. The Maine portion starts after life in California, New York, and Connecticut, when a stay on North Haven made Crewe realize he wanted to raise his two young daughters in Maine. The island didn’t seem feasible for year-round living, but then he and his family discovered Portland. In 1991 they moved to the Western Promenade, and approximately a year later Crewe started Gateway Mastering Studios with friend and engineer Bob Ludwig. Again, if you’re not well acquainted with the music business, you might not know Gateway, but insiders do. It’s an internationally renowned facility for mastering audio for artists such as Bruce Springsteen, Madonna, and Eric Clapton.

There’s a lot of rock-and-roll pleasure to be had from the Crewes.

But twin tragedies involving Dan Crewe’s daughter and brother launched Crewe into a second career as a philanthropist. All of this relates, in a complicated way, to 33 acres of land in Cumberland that Crewe bought in 1993. The land initially had an 1830s house and barn, which Crewe renovated so he could live on the property with his two young children. He’d separated from his wife, singer-songwriter Cindy Bullens, at the time. Bullens, with whom Crewe is still close, now goes by Cidny and identifies as male. Then their daughter Jessie got sick. She died of complications from Hodgkin’s disease when she was only 11. That emotional upheaval put a lot of things in motion for him, Crewe says. He decided to carve off 21 acres of his property and confer the easement to the Chebeague and Cumberland Land Trust while transferring ownership to Breakwater School in Portland, where Jessie was once a student. Now Breakwater can bring students to the Jessie Bullens-Crewe Nature Preserve, which has an open shelter with a firepit, for overnights and nature study.

The division of the land left Crewe with 12 acres and the renovated farmhouse. At first, Crewe couldn’t leave the old house because of Jessie, and then he couldn’t stay because of Jessie. He built a new house on the property, but soon enough his elder daughter, Reid, had grown up and was living in another state and the house felt too big for him. He made the decision to build yet another house on the property in order to downsize.

Although Crewe wanted a more modest house, he also wanted one where he could exhibit his extensive art collection. “I envisioned a large New York loft, but in keeping with the farm setting,” he says. The result was a double-gable structure with a modern interior, including a two-story living room with specialized lighting and plenty of wall space for hanging art. The upstairs had three bedrooms, and the downstairs had a library and a kitchen adjacent to the living room.

In the strange way of the world, Crewe’s daughter Reid then married and returned to Maine with her husband and first child, so Crewe built another house on his property to accommodate them. All of this building (including the building of Gateway Mastering Studios in Portland) was done by Craig Cooper of Rainbow Construction in Cape Elizabeth. Cooper and Crewe’s collaboration doesn’t end there. Indeed, the two men have lost count of how many projects they’ve done together. The original house in Portland, a condo in Portland, a property in Cape Elizabeth. Eighteen maybe? Twenty?

In 2010 another bad thing happened. Bob flew to Boston from California because the two brothers were planning to go together to New York to celebrate the five-year anniversary of Jersey Boys. That night, Bob became confused when he came out of the bedroom where he was staying and fell down a flight of stairs. The accident injured his brain and precipitated a decline that ended in his death four years later.

During his life, Bob Crewe had been a successful visual artist as well as a songwriter and record producer. When his brother’s health declined, Dan Crewe had to move him to a nursing home in Maine. He also had to figure out what to do with the art that Bob had produced and collected over the years, as well as the extensive memorabilia from his music career. Crewe decided to build a climate-controlled, humidity-controlled art gallery on his property.

Walking into the finished space is a complete surprise. One steps out of a typical New England landscape into a foyer of Jersey Boys posters before crossing into a room that feels like the Bob Crewe Research Library, if there were such a thing. A piano on which Bob wrote many of his hits sits in one corner of the room. A large table in the middle of the space looks like an elegant study space in an art museum. The walls are filled with gold and platinum records, album covers, framed sheet music, and certificates of achievement. Beyond this library is a second room that feels like a more traditional art gallery, with high white walls, abstract paintings, and sculptures that incorporate organic forms and textured surfaces, sometimes with a circle motif. Donna McNeil, retired director of the Maine Arts Commission, curated the exhibition, aiming to create a mini-retrospective of the visual art that shows Bob’s transition from abstract expressionism to minimalism, while also making the link between Bob’s two artistic selves.

What had started as a farmhouse in Cumberland— painfully memorialized in Bullens’s song “Mockingbird Hill”— had become a piece of land with a nature preserve, four homes, and an art gallery. And then the situation changed yet again. Reid and her family, which now includes two children, moved into Portland, and Crewe started to feel he had too much property to take care of. He was ready to move on. “Every time I solve a problem,” he says, “I create two more.” Now he’s in the process of building a new house for himself in Cumberland Foreside and getting ready to sell his property.

In order to move on, emotionally and perhaps literally, it has been Crewe’s habit to give. Before his death, Bob Crewe set up the Bob Crewe Foundation to support the artistic efforts of young people, as well as AIDS research and LGBT rights. Crewe is now the CEO and chairman of the foundation. He is also on the board of the Maine College of Art. In 2013 Crewe and MECA President Don Tuski started talking about the fact that many musicians are also visual artists. There was the obvious case of Bob, who attended Parsons School of Design and who, as Tuski observes, wrote songs with a strong visual component, but the men could think of countless other musicians who had spent part of their life in art school or who created visual art. What if MECA could do something to foster art students’ interest in music and musicians’ interest in art? The men hit on the idea of creating what they hope will be a cutting-edge entity: a music program integrated into an art college. That is, not a conservatory, of which there are so many in this country, but a program that will make the connection between visual art and sound and music. “Normally schools have parallel art and music programs,” says Ian Anderson, MECA’s vice president of academic affairsand dean of the college. “We want to have the music curriculum embedded as an option/addition to the art and design curriculum we already have.” This means that MECA will offer classes in basic music theory, as well as in songwriting, color and sound, modern recording techniques, and other options for students interested in performance art, game design, animation, and film. The idea for the Bob Crewe Program for Art and Music came with another inspiration. What if MECA should house Bob’s art collection when Crewe moves out of his Cumberland Center property?

With a $3 million gift from the Bob Crewe Foundation, both the gallery and the art program are being built. The construction firm Wright-Ryan of Portland are the builders, and the plan is to launch the new music minor in the fall of 2015. One million dollars will go to infrastructure for the project, which will include the new gallery but also practice rooms and computer labs, as so much music is now recorded electronically. The other $2 million will go into MECA’s endowment to support student scholarships and faculty hiring.

Explaining the gift, Crewe cites not just his brother but his daughter: “My life was inextricably changed when Jessie died. I grieve from it and hurt from it all the time, but I was also inspired by her. She was a courageous and outrageous child, and I am motivated by fulfilling what she was destined to do.”