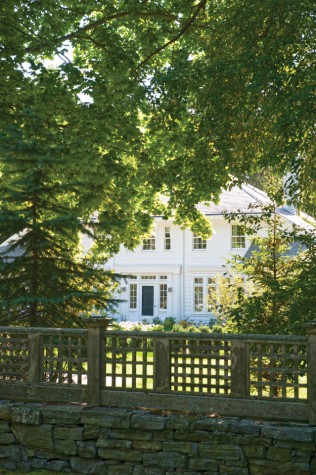 Falmouth Foreside is awash with green in the summertime. 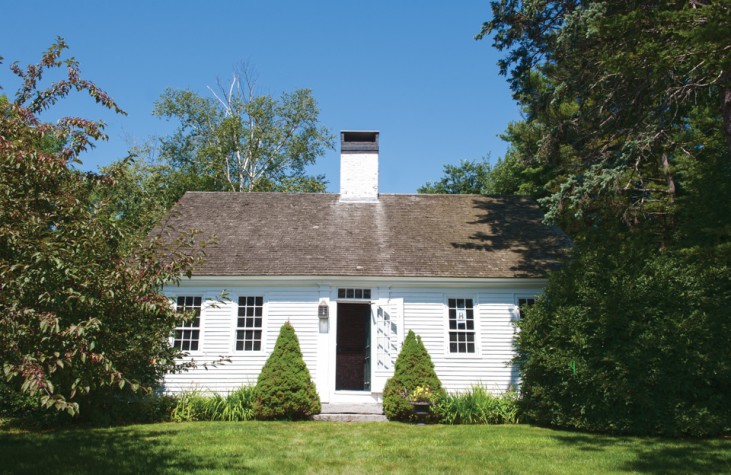 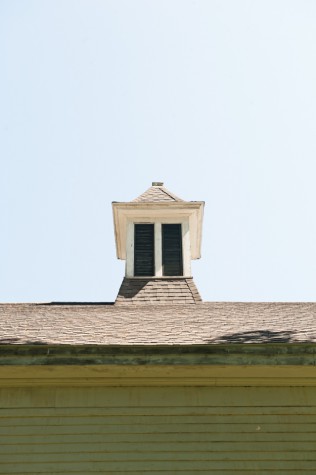 References to Maine’s past can be seen in all kinds of houses along Foreside Road. 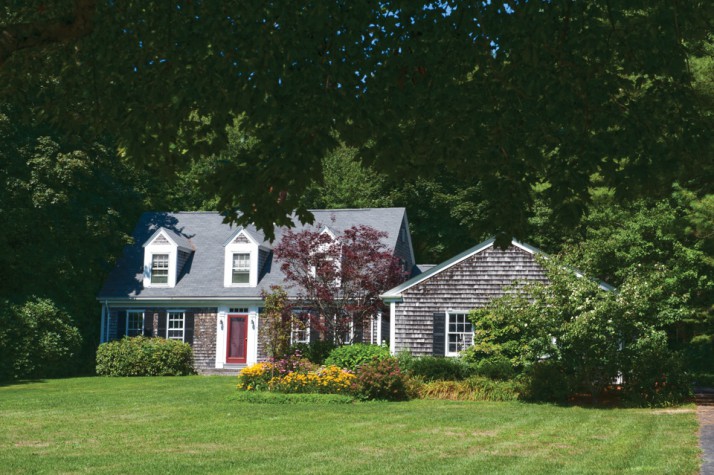 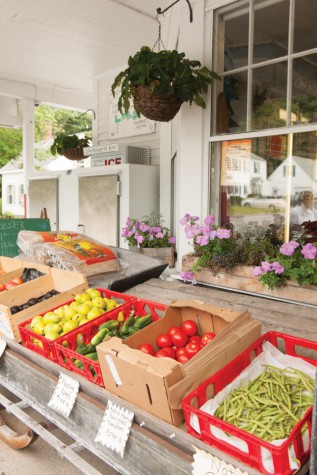 The Town Landing Market is a Foreside staple. 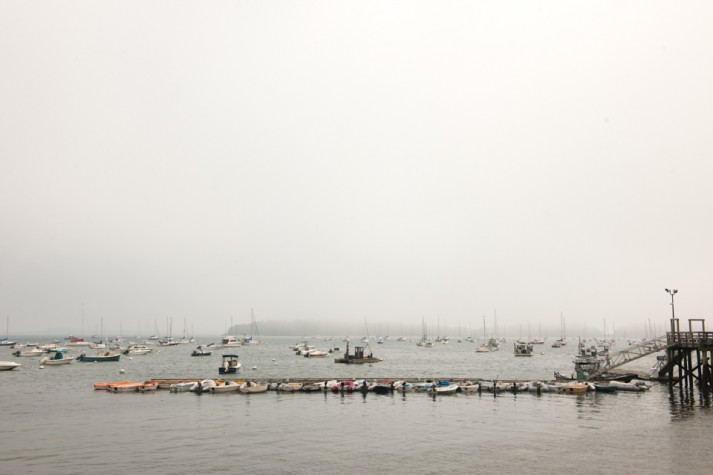 A look at the harbor on a beautiful gray day 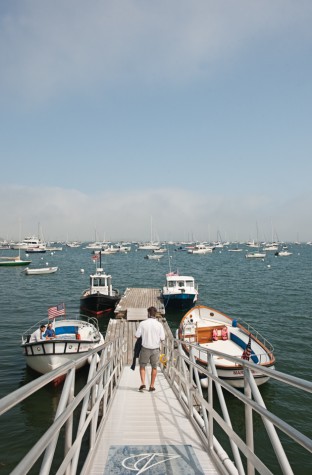 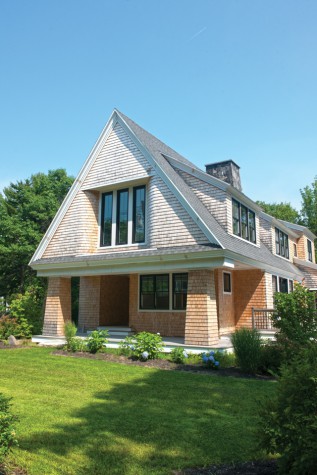 Vacant lots can be difficult to come by in the Foreside, but not impossible—new homes continue to pop up along the roads splintering off of Foreside Road. 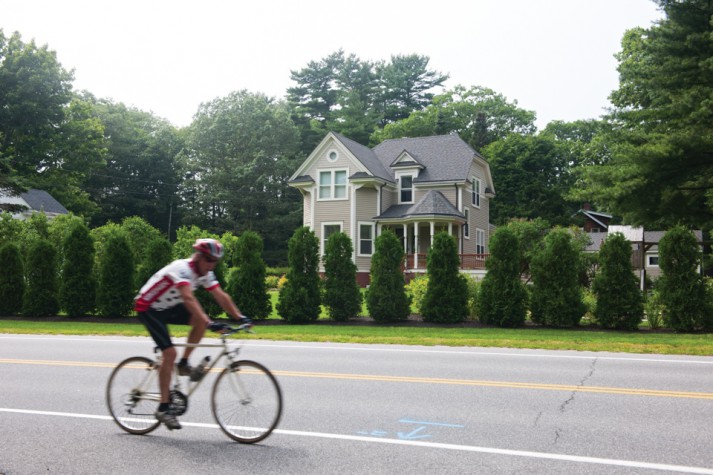 A cyclist rides past a restored Victorian home 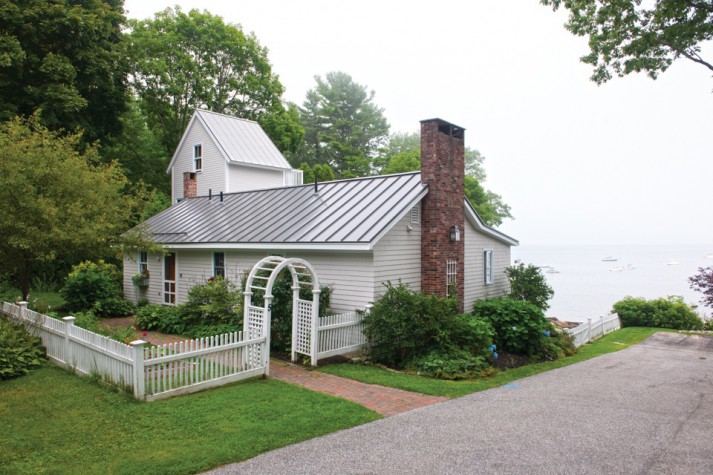 Home with a view: several hundred boats are anchored near the Foreside. 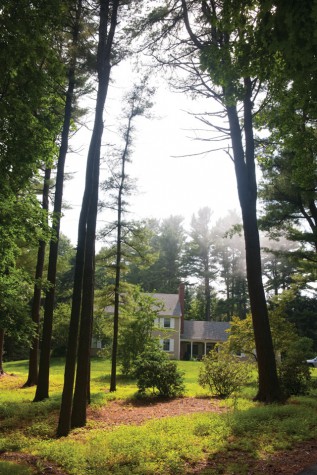 An oceanfront community with an urban edge

Just a few minutes from the city of Portland, Falmouth Foreside has a feel all its own. Across the bridge spanning the Presumpscot River, past the cottagey homes along a residential strip of Route 1 and the modest entrance to the beautiful Maine Audubon headquarters, the road splinters. Falmouth Foreside’s main artery, Route 88, veers right, engulfing a driver in a wash of green in the summer, white in the winter. Almost immediately upon turning onto 88 (known, for a stretch, as Foreside Road), one understands that she has entered the best kind of suburbia, with natural beauty, peace, quiet, and privacy, and from which the urban center is actually accessible. Unlike most suburbs, the Foreside lies alongside the coast. Hints of ocean are all over the place, in the low price per pound for live lobster at the Town Landing Market, the crisp whites and nautical blues of the yacht club signage along the road, and the smell of salt in the air. This isn’t your typical beachside community. In the winter, you won’t find many windows boarded up, or starfish on sills. Instead, you’ll find a neighborhood aglow with twinkling lights, windows filled with trees and candles, driveways plowed, chimneys smoking.

Falmouth Foreside is one of the state’s most elegant options for families looking to live in Maine year-round—for an engaged community that values what Portland has to offer, for the outstanding Falmouth public school systems (arguably the best in the state), and for the wide variety of recreational opportunities on the water. These were some of the many draws for architectural designer and decorator Linda Banks of Simply Home and Banks Design Associates, who moved to Maine from Connecticut with her young daughter in 1999. She wanted to “get out of the passing lane,” to “enjoy life a little more,” and to “simplify.” Her connection to the Foreside goes back decades— her grandparents settled there in the 70s—and she knew it was where she most wanted to be in Maine. “From my home I can smell the ocean, hear the fog horn,” she tells me. “It’s very quiet and peaceful but still convenient to Portland and the airport.” Now, instead of waiting in traffic for hours on end, which was the norm in Connecticut, she’s minutes away from the city; sometimes she forgoes the car altogether and jogs or bikes into Portland for a meeting.

For many good reasons—location prime among them— Falmouth Foreside has attracted summer visitors and successful professionals and businesspeople for well over a century now. Proof is in the grand homes set back from Foreside Road, with unique architectural details and thoughtful, mature landscaping enveloping circular driveways. Many of these are perched at the top of the steep incline that runs down to the water and have sprawling views of the bay. Around the turn of the century, a trolley service connected the Foreside to Portland and further solidified the area’s commercial connection to Portland and its appeal to commuters. At that time, too, the Portland Country Club and Portland Yacht Club were moved to Falmouth. Following World War II, as more and more people across the country decided to trade in their urban dwellings for more space, the area doubled in population, transitioning from an agrarian community to a suburban one.

There is a cohesive, classic New England feeling to the whole neighborhood, which starts by a perfectly stoic stone Episcopal Church near the beginning of Route 88. Older, smaller Victorians and Capes are often situated close to the road, sprinkled among newer homes that reference centuries-old styles. Now and then you’ll encounter a bungalow or a ranch designed to make the most of the light or a keyhole ocean view.

More architectural diversity can be found on the roads splintering off of Foreside. On the west side of Foreside Road, away from the water, there are several tasteful developments wrapping around dead-end roads. On the web of roads descending toward the water, the layout is more haphazard and the homes more eclectic. They range in style and function from the rare unwinterized cottage to decidedly midcentury shelters to stately Colonials with wide verandas, all shaded by big, old trees. Through these trees, the views afforded by the steep, rocky coastline are of a thick strip of ocean, filled in the summer with hundreds of boats of all kinds (there are 1,500 boats in the anchorage). It is hard to overestimate the role that boating plays in Falmouth’s history, both as an economic driver and a leisurely pastime. Today, the Foreside is home to three boat landings that get plenty of use.

Falmouth Foreside has a kind of classic, buttoned-up beauty about it, but it also has water, which can infect people with lightheartedness—maybe even joy (at least in the summer) at their stroke of luck to be living so close to the ocean. Alex and Marian Starkey felt this way when they found property in Falmouth Foreside within their price range. On a street with houses of all sizes and neighbors of all ages, the young couple is finishing construction on a Kaplan Thompson–designed BrightBuilt net- zero-energy home. Although they aren’t boaters themselves, the Starkeys, along with many others in the Foreside, regularly take their dogs for walks at the Town Landing public beach, a skip and a jump from their new house.

Curious to see this Town Landing for myself, I visit on a summer afternoon that can’t decide what sort it wants to be. Dark clouds boil in the distance, but the temperature is warm, the wind is moderate, and the rocky stretch of beach is busy with activity. Not far from shore, kids in small sailboats trail their instructor like a lot of ducklings. There are people on kayaks, on paddleboards, and in rowboats. Beyond these playful crafts are so many boats of so many different shapes and sizes, it is difficult to distinguish those in motion from those at rest.

Boating is such an important part of life for so many in Falmouth Foreside—and for those who visit regularly to take advantage of the facilities—that Casco Bay and all of its islands are practically an extension of the neighborhood. I suspect that, for kids growing up in the area, friendships are made on the water as well as on the soccer field or in the classroom, and my hunch is confirmed on a visit to the Portland Yacht Club, where kids in life vests walk arm-in-arm across the grassy lookout, their shoulders tan, their wind-tangled hair lightened with sun by August. This is a dream location for a family with school-aged kids, but also for single adults, retirees, avid boaters, or young couples like the Starkeys looking to settle into a coastal community convenient to Portland.

By the time the dark clouds pass and the evening fully commits to sun, photographer Nicole Wolf and I are done exploring the neighborhood but are not quite done with Foreside-style water views, so we head down to the Dockside Grill at Handy Boat marina for a drink. The restaurant is just a stone’s throw from the ocean. We take a seat at the sleek, outdoor bar with the kind of unabashed view that would be difficult to come by in a Portland restaurant. We’re so close to the ocean I can see it, hear it, smell it, practically taste it, along with our crisp cocktails. All around us, happy patrons chat and laugh, wave to people walking up from the docks. Part of the appeal of the Foreside has always been its proximity to what Portland has to offer, but the appeal works both ways. How convenient for those of us in Portland that the Foreside is so close, Nicole and I observe. And we stay near the water for a while.