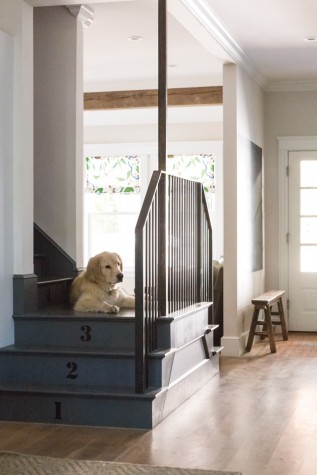 A slender steel railing crafted by Precision Welding in Westbrook helps maintain an open feeling around the rear staircase. “Wood would have looked too heavy,” says builder Tim Spang. 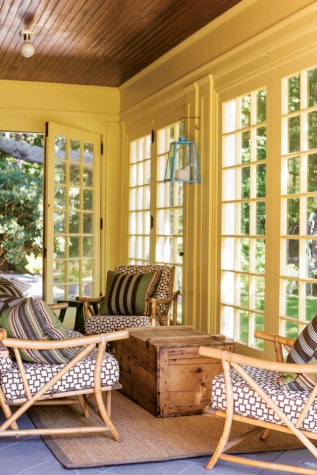 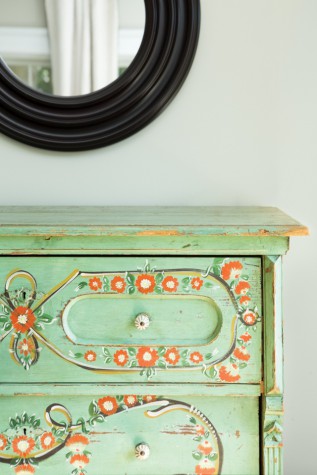 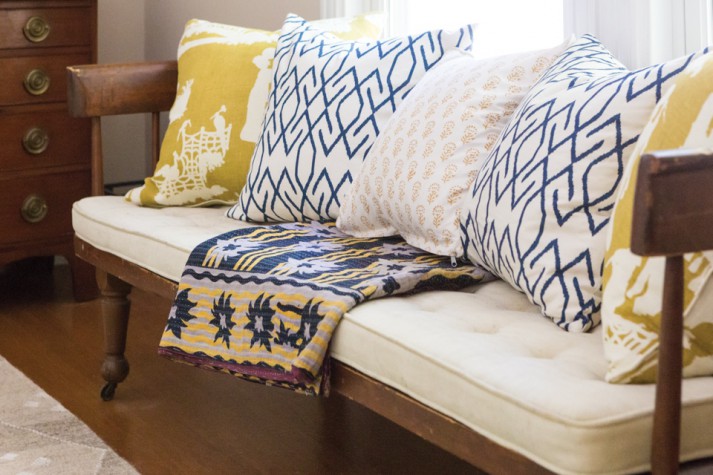 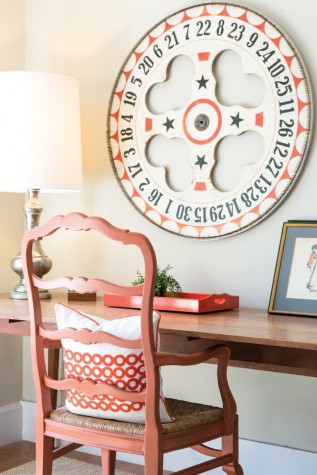 In an upstairs alcove, a cherry Thos. Moser desk serves as a homework station; the vintage carnival wheel is from Portland Architectural Salvage. 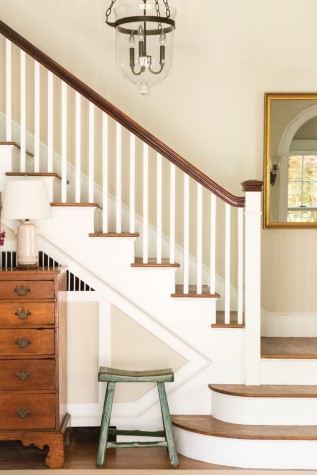 In the front hall, a patinaed bureau from Pillars in Yarmouth and a distressed stool—a reproduction of an Asian antique—are juxtaposed with the home’s elegant maple staircase. 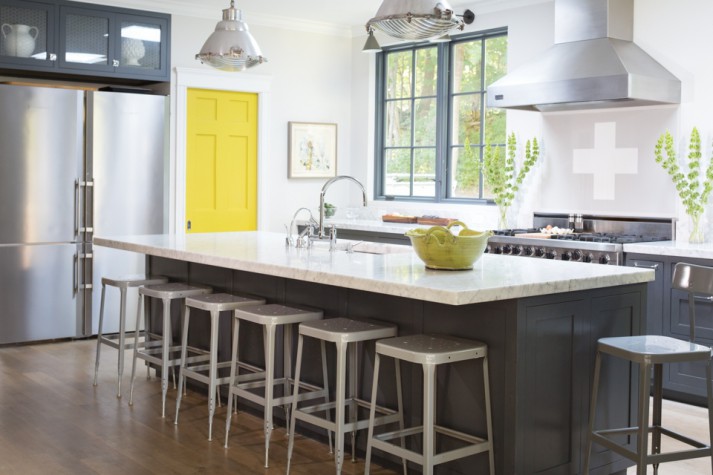 Artful details, both subtle and spirited, enliven Bronwyn Huffard’s kitchen: she stenciled the cross above the stove with a custom template and mixed her own chartreuse paint for the sliding pantry door, a Portland Architectural Salvage find. A nearly 12-foot-long Carrara marble island from Morningstar Stone and Tile in Topsham easily accommodates her family of six. Scott Libby Woodworking in Bowdoinham crafted the cabinets. The collage is by Huffard’s mother, Robin McCarthy. 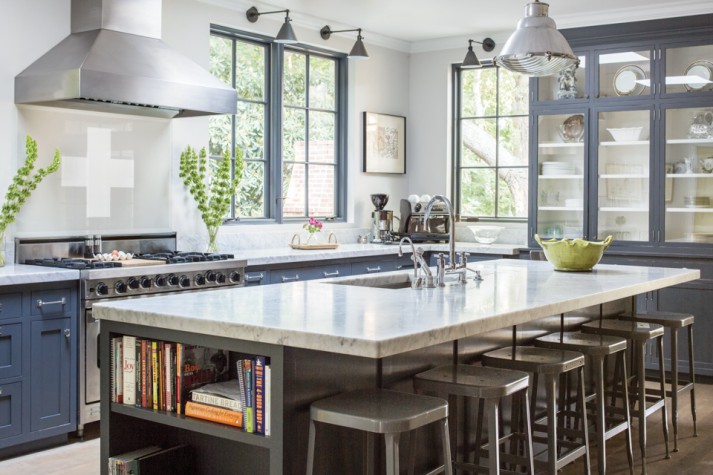 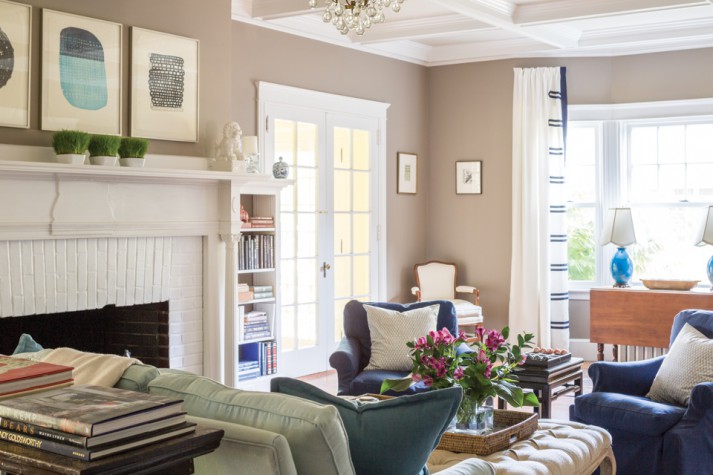 Huffard rearranges the living room furniture (above), including an antique linen sofa, a pair of slipcovered armchairs from Pillars, and an heirloom drop-leaf table, every few months. The prints above the fireplace are by Anna Hepler. 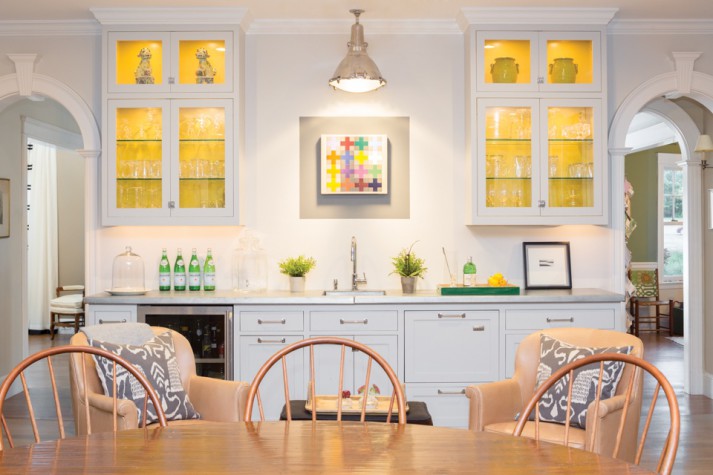 On a whim one day, Huffard power-sanded the finish off the dining area’s zinc bar (opposite), created by Rusted Puffin Metal Works in Portland. “I wanted the surface to show stains and glass rings and tell a story,” she says. A salvaged factory light illuminates the counter and a prized acrylic by Joshua Ferry, mounted on a painted square. Huffard had the 1950s armchairs from Pillars reupholstered in leather. 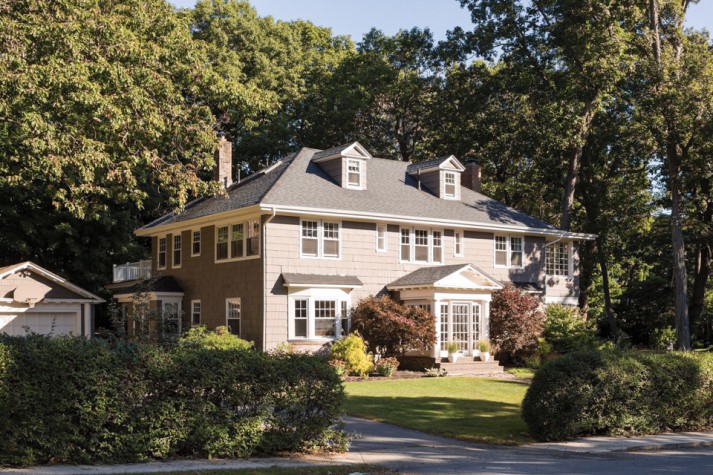 Huffard grew up down the street from the Colonial Revival home she now owns. “I remember trick-or- treating here, and being invited in for cookies—the owners were lovely,” she says. 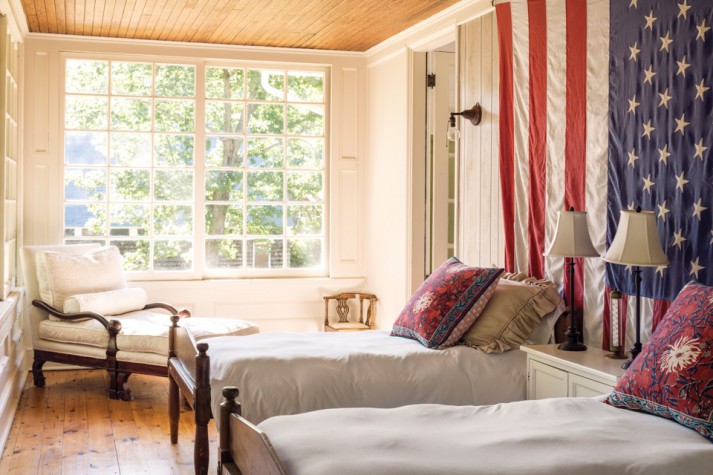 Summer sleepovers happen in the upstairs sunroom, furnished with fruitwood beds that have been in the Huffard family for three generations. The American flag used to fly at a South Portland marina where Huffard worked in high school. 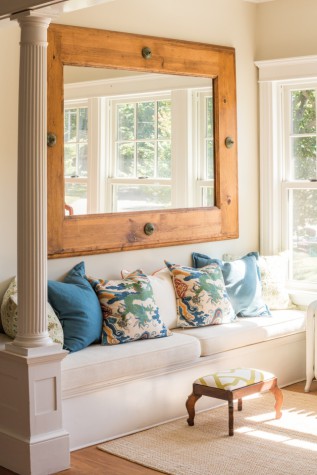 On the other side of the alcove, a profusion of pillows gives the window seat a sofa-like appeal. The pine mirror is from a flea market in Colorado. 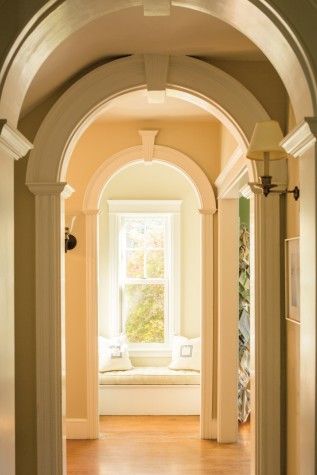 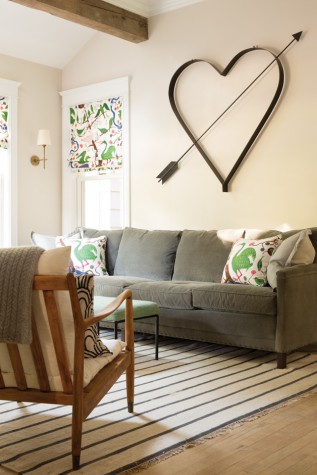 The shades and pillows in the den are made from five yards of Josef Frank fabric Huffard found at a great price. To stretch the material, she had plain panels sewn into the middle of the window treatments. “We rarely put them down, so it’s not an issue,” she says. The velvet sofa is from Lee Industries, and the steel Cupid’s heart is from Cornish Trading Company.

A designer decorates (and redecorates) her Cape Elizabeth home

Furnishings move around interior decorator Bronwyn Huffard’s Cape Elizabeth Colonial like dancers in a graceful choreography continuously switching partners. The colorful ceramic elephant pedestals that once propped up a dining table now hold court in her office, a long desktop laid across their saddles. A massive steel Cupid’s heart had a few homes before ending up in the den, where it hovers, like a primitive emoji, over a charcoal velvet sofa. And in the five months since these photos were taken, the living room furniture, including an antique gray-blue linen sofa and a dozen armchairs and tables, has been rearranged twice. “My son recently asked if we could try leaving the living room alone for six months, but I don’t think so—I don’t like things to stay the same,” she says.

Huffard has honed her design skills over 18 years of fixing up houses with her husband, Ben, an orthopedic surgeon. They lived in three states while he was completing his training and bought and sold homes in each place. In 2007, after a yearlong stint in Vail, Huffard was ready to return to her Maine roots. The fact that the 1921 Colonial Revival home the couple purchased is located on the same street she grew up on is a happy coincidence. “It’s a wonderful neighborhood to be a kid in,” says Huffard, whose four children range in ages from 9 to 16. Four years after relocating, she started her business, Huffard House, now based in an office off the front hall of the home. “People used to ask me to help with projects, but with young kids and moving all the time, I didn’t consider interior design as a career. It wasn’t until we were settled here that I thought, Huh, that is the most perfect thing I can think of doing.”

Initially, the couple passed over their current house. “My reaction was, ‘It’s beautiful—and it’s someone else’s problem,’” says Huffard. “The scale of what needed to be done was daunting.” But her brother, who remembered the place fondly from childhood, convinced her to take on the challenge. Right away, the Huffards replaced all the windows, removed reams of wallpaper, and painted every room, as well as the “bizarrely flesh-toned” exterior shingles, now a warm gray-brown. In 2010 they went after the Holy Grail of modern family living: transforming a series of small, closed-off rooms into an expansive kitchen- dining-mudroom space.

The reimagined wing encompasses a former study, galley kitchen, dining area, and entryway, along with a 475-square-foot addition designed by Cape Elizabeth architect Joe Chalat. A wide doorway erected between the living room and new dining area improved the flow of the downstairs, as well as the view. “I love that now you can sit at the kitchen table and look into this beautiful old living space,” says Chalat of the grand front room, which features the home’s original coffered ceiling, columned fireplace, and French doors. Arched plaster doorframes on either side of a zinc bar align with the originals in the front hall, creating a pleasing symmetry. “Wood moldings would have been pricey and not as authentic,” says Kennebunkport builder Tim Spang, who used custom-made plastering tools to replicate the existing archways. To open up the rear staircase, Chalat and Spang removed the walls around the base and put in an airy landing with steps on either side leading to the den-mudroom area and the kitchen. Huffard painted the stairs charcoal to blend with a new raw steel railing and stenciled numbers on the risers, conjuring the way a child might count as he or she ascends a flight.

In the kitchen, deep blue-gray cabinetry and swirled Carrara marble countertops are layered over pale fog- colored walls, rendering a composition as artful and nuanced as a storm cloud. The “lightning bolt” comes in the form of a chartreuse sliding pantry door tucked into a sidewall. “I love neutral rooms with bold pops of color,” says Huffard, who pulled the high-octane shade from a pair of antique ceramic lamps in her office and mixed the paint herself. She used the same paint—let’s call it Bronwyn Yellow—inside two glass-front cabinets above the bar in the dining area, on the mudroom’s metal-cage light fixture, and on dresser-top trays and a chinoiserie mirror in her bedroom, furnished in shades of ecru and white with hints of navy blue. “I make things hard for myself because I’ll get an idea about something, like a paint color, and if I can’t find it, I figure out how to create it on my own,” says Huffard.

For the backsplash above the stove, she considered myriad tile options before settling on a giant stenciled cross covered with a glass panel. The design was inspired by South Portland artist Joshua Ferry’s painting of brightly colored crosses arrayed on a gray grid, which hangs on the opposite wall. Huffard felt the work belonged between the cabinets with the yellow interiors, but the space was too big, so she centered the art on a steely painted square. The Albers-like juxtaposition of colors and shapes makes the canvas look like it’s leaping forward, underscoring the illusions in a painting whose images read as sharp or blurred streaks, depending on where you focus.

To bring as much light as possible into the cooking space, Huffard specified large casement windows in lieu of upper cabinets. “I had my heart set on vintage-style steel windows, which are so beautiful they make me swoon, but the reality is they’re really inefficient in our climate,” she says. So she customized wood casements with six-pane grille patterns and extra-thin mullions and painted them dark gray to resemble metal; trimless openings enhance the industrial look. The oven and its trapezoidal hood punctuate the window wall, a placement Yarmouth kitchen designer Jeanne Rapone advocated over putting the range on the island, where the sink is. “It’s cleaner to not have a bulky appliance in the middle of the room. But also, we spend the majority of our time in the kitchen at the sink, so it’s nice to be able to face your family when you’re standing there,” she says.

A few days before she entertained a reporter, Huffard had her laundry room floor painted a vibrant grass green. The room’s contents were temporarily stowed in an adjacent hallway alcove, along with an oak bureau from her dressing room, which she had just replaced with an antique French wardrobe from Pillars in Yarmouth. “This is what happens all the time,” says Huffard, gesturing toward the piles around a cherry Thos. Moser desk where her kids sometimes do homework. “But I love projects, obviously. And I view my home as a laboratory, the place where I find what works and make mistakes, so I don’t make them in my clients’ homes.” She now has more latitude for experimenting thanks to a storage unit she acquired to accompany a new staging branch of her business. Inside the little space is a whole house worth of furnishings—backups she can call upon at a moment’s notice to assume their starring roles.