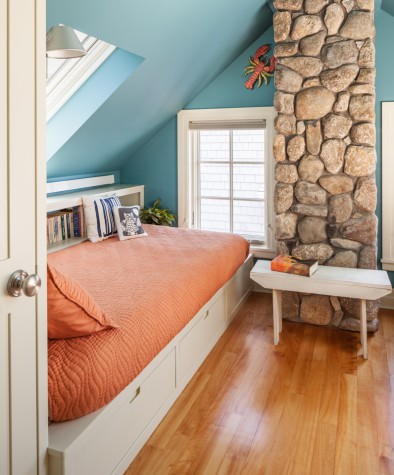 In the guest bedroom, Handy mixed tangerine bedding with Martin- Senour Paints’ teal Hudson Bay shade—a complementary combination that makes each bold color appear even brighter. Built-in shelving and bed platforms with drawers, one on each side of the room, maximize storage in a tight space. 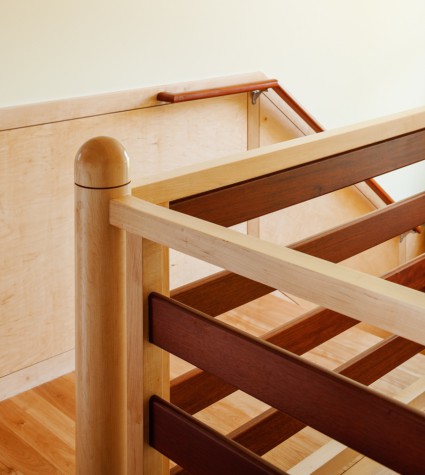 “I didn’t just get a staircase, I got a staircase,” says the homeowner of the maple, birch, and Brazilian cherry design Portland architect Carol De Tine dreamed up. 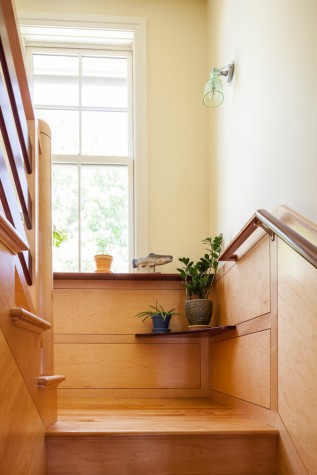 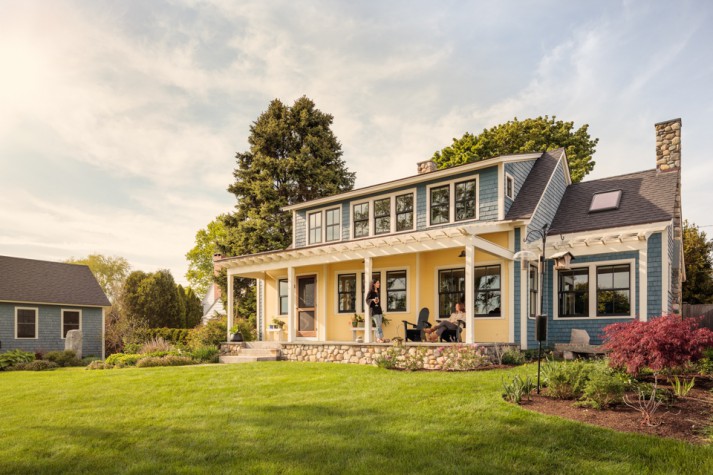 Passers-by often stop to admire the home's playful blue-and-yellow façade, which was inspired by the colors inside. Note how the center porch wall is angled to emphasize the view. G.M. Libby and Sons Masonry in North Yarmouth put in the salvaged granite steps, bluestone deck and walkway, and granite and basalt veneers recovered from an old stonewall. 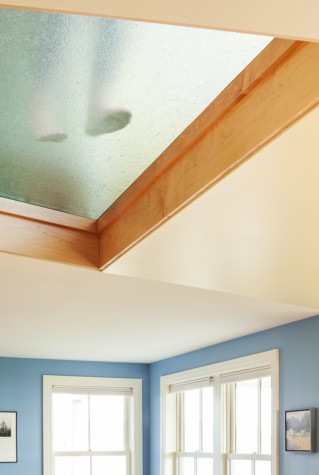 A translucent glass floor panel in the owner’s bedroom filters light into the rooms below. The limestone vanity top in her bathroom is imprinted with small fossils. 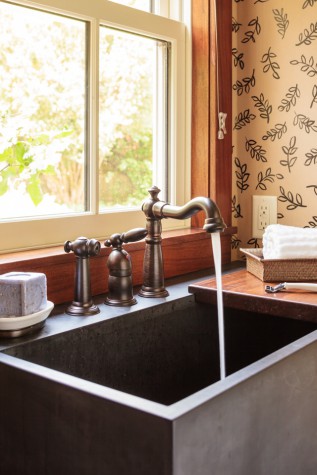 A slate sink with a removable mahogany shelf doubles as a potting station. The wallpaper is by Peter Fasano. 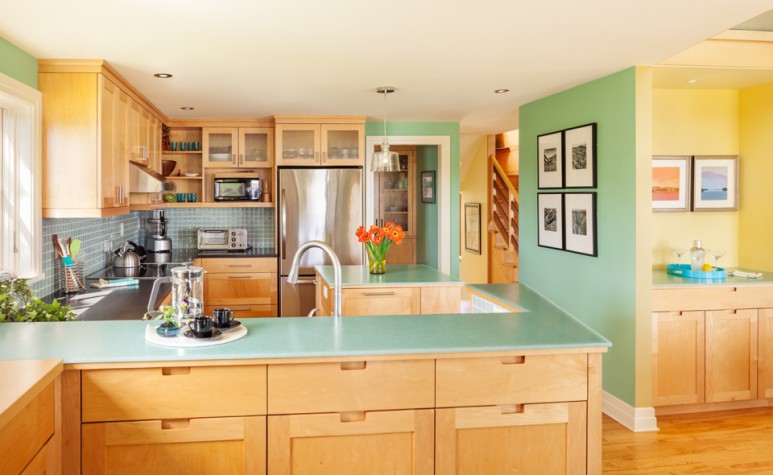 Portland interior designer Jeanne Handy knew her client could handle a lot of color when she saw her set of Connie Hayes seascapes (far right). The kitchen walls are Martin-Senour Paints’ Juniper and the dining area is Nankeen. The maple cabinetry was crafted by Hanley and Yost Custom Builders in Pownal. 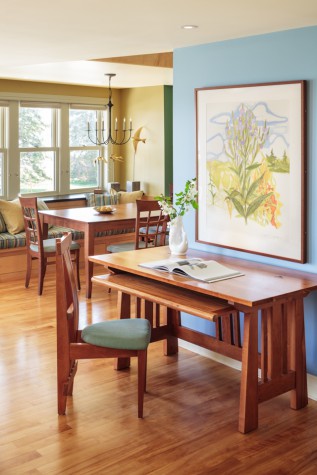 In the powder room 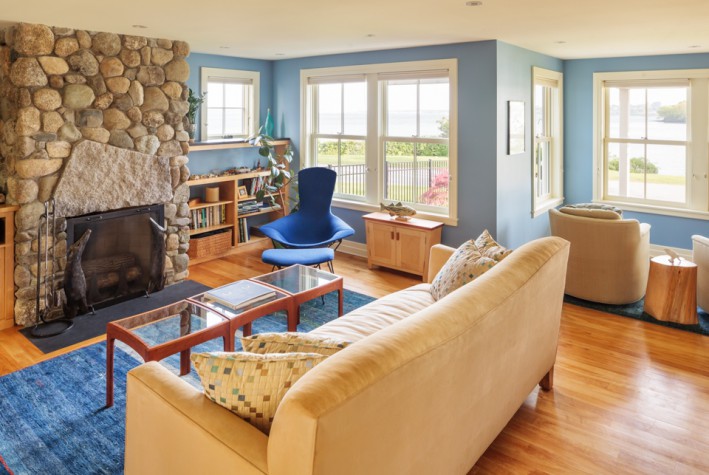 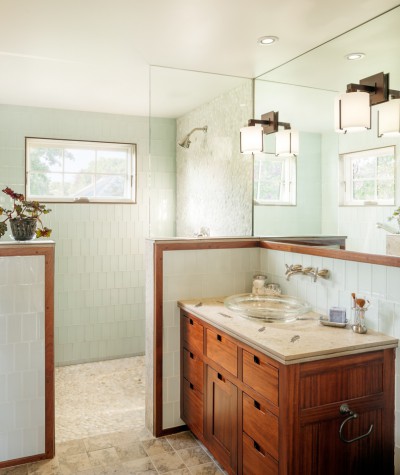 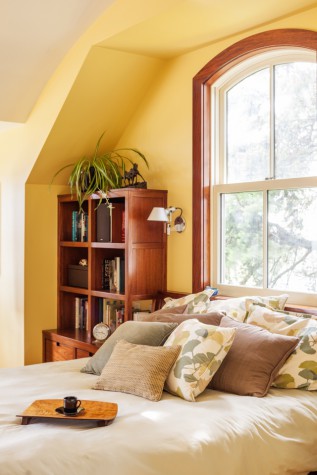 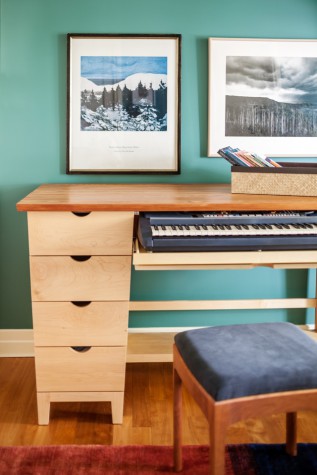 In the music/guest room, a maple keyboard table (above), crafted by Nicholas Heller, mirrors the tapered shapes seen elsewhere in the house; the walls are Martin-Senour Paints’ Briny Deep. 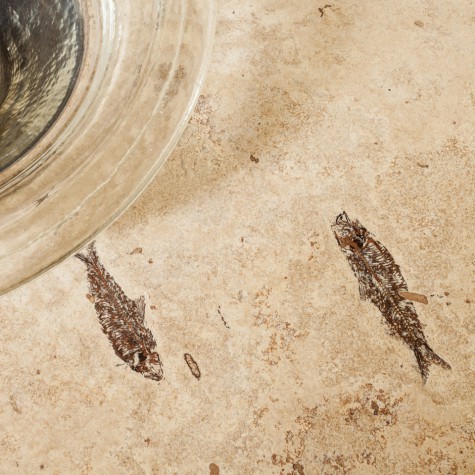 The triangular dining nook fitted with a window seat and slate-topped shelf in the same isosceles shape. The cherry desk and chair are from Green Design Furniture in Portland, and the painting is by local artist John Arden Knight.

Some people ease into using more color, dipping their toes in as if it were a forbidding ocean. Deb Williams* decided to take a plunge. The formerly white walls of her Falmouth home are now painted aqua, teal, and cornflower blue, in honor of the half-moon-shaped slice of Casco Bay framed in her front windows, with pockets of yellow mixed in to simulate sunshine. “I was terrified of color, but I wanted to use it—I guess I was mostly afraid of me picking the colors,” says Williams, who delegated the job to Portland interior designer Jeanne Handy and didn’t look back. Until, that is, she saw the tinted primer on the walls. “I walked in one day and the kitchen was the most God-awful shade of green,” says Williams. “I thought, ‘Oh no, what have I done?’” But the final bright turquoise did not disappoint: juxtaposed with pale maple cabinets, it has the dazzling effect of sea glass scattered in the sand.

Williams purchased the home in the Mackworth Point neighborhood 17 years ago, not knowing how long she would stay. “I had never lived anywhere for more than four years, but I love this area and the proximity to Portland,” she says. Eight years after moving in, she was ready to make the traditional, gable-dormered Cape her own. She initially approached Carol De Tine of Carriage House Studio Architects in Portland about a modest renovation to open up the small rooms, creating a modern layout that would be more comfortable for entertaining. But as with the color scheme, “I realized I wasn’t going to be happy with small changes,” says Williams. “I wanted a bigger impact.”

De Tine started by adding a trellised front porch for enjoying the view. A curved asphalt-shingle roof extends over part of the platform, shading porch sitters while complying with a setback requirement for covered structures, measured from the road that runs at an angle to the house. She then bumped out the southwestern corner of the building, creating a small entryway in the kitchen and a triangular dining nook with a trio of windows. “When you look closely, you see the dining area wall is subtly slanted, which is a nice way of breaking out of the typical Cape box,” says De Tine, who worked with Dennis Hanley and Greg Yost of Hanley and Yost Custom Builders in Pownal, now run solely by Yost. (Hanley now owns Hanley Custom Woodworking and Design, also in Pownal.) “But more importantly, when you’re inside or on the porch, the angle orients you toward the water, as opposed to Route 1,” located on the other side of a wall of pines.

To bring airiness to the interior, De Tine moved the main staircase from the center of the house to the back and turned an attached garage into the living room. Arched ceilings and a shed dormer added height to Williams’s bedroom and music/ guest room (she is a singer and musician), and a long stretch of windows highlights the view. The other guest room, located under a separate roof in the old garage unit, had an especially low, sharply pitched ceiling. “My dad, who is six-foot-four, basically had to dive from the doorway onto the bed because he couldn’t stand up in there,” says Williams. So De Tine raised the room’s roof two feet and put in a pair of windows and skylights to combat the cave-like feel.

The home’s first floor was designed with parties in mind. Having the entryway in the kitchen sets a friendly, casual tone and allows Williams, an avid cook, to greet guests from the sink or stove. “I have a pet peeve about formal front doors that only get used on special occasions,” says De Tine. “We wanted one communal place for coming in.” Williams sets up the bar on a maple cabinet in the entryway “so people can start drinking immediately.” Appetizers or dinner foods, strategically placed on a built-in buffet off the kitchen, the dining table, or a desk in the living room, encourage visitors to move through the house. “It’s a flexible space with lots of different staging areas, which I love,” says Williams.

Looking from the kitchen into the dining and living room, the walls change from aqua to yellow to blue, like bands of sea and sky separated by a golden horizon line. “To me, a beautiful view or piece of artwork looks more spectacular when juxtaposed with coordinating wall colors,” says Handy, who pulls her palettes from outside. Here, blue was a natural starting point, “but you have to be careful with blue in Maine because the sky is often gray—a little yellow or orange helps warm things up.” Before finalizing the scheme, Handy painted large foam-core swatches to gauge how much saturation her client could take, although she already had an inkling. “This was a person who said she was scared of color, but she had things in her home that told me otherwise,” says Handy. Case in point: a set of vibrant turquoise, orange, and blue seascapes by Connie Hayes, which Handy arranged on a lemony wall above the buffet, creating intriguing new complementary and analogous pairings.

On the ceiling in front of the buffet is a trapezoid-shaped glass panel infused with bubbles that resemble raindrops. “The front porch shades the house, so this was a way of introducing more light, as well as interesting texture,” says De Tine. The translucent window also turns the simple act of the owner’s cats passing through her bedroom overhead into an artful performance, with their elegant bodies shown in silhouette. De Tine and Handy matched the ceiling treatment with sea- glass-like aqua Avonite counters, rain-glass cabinet panels— reminiscent of water-streaked windows—and a gray-green glass tile backsplash to offset the maple cabinetry in the kitchen-dining area and create a shimmery effect.

Other details are personal to Williams, and to her pets. In the living room, an iron fireplace screen crafted by David Hill of Noteworthy Design Forge in Harpswell features a pair of seated coyotes with upturned snouts, a design inspired by Williams’s collection of Native American animal fetishes arrayed on an adjacent bookshelf. A caramel Kravet tête-à-tête, positioned along a bank of windows in the back of the room, is embossed with a subtle cheetah pattern. “I like to incorporate things my clients like, and this one likes cats,” says Handy. And Williams’s three felines like birds, of course, so De Tine designed built-in cherry perches beneath the stairwell windows, to overlook the feeders in the backyard.

On a scale of 1 to 10, rating how nervous her clients are when they start a project, Handy gives Williams an 8. “And it probably went up to a 9 at certain points during the process—I was pretty stressed,” says Williams. “But the energy of the colors Jeanne chose really makes a difference in my mood, and every time I see things like the staircase I am appreciating the craftsmanship that went into them,” she says of the maple, birch, and Brazilian cherry passageway De Tine designed and Hanley and Yost’s team constructed. Like taking an icy dip, the prospect was daunting, but the aftereffects are sublime.