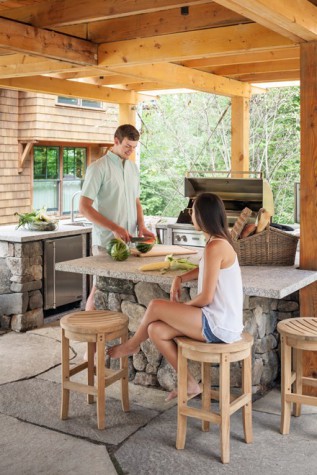 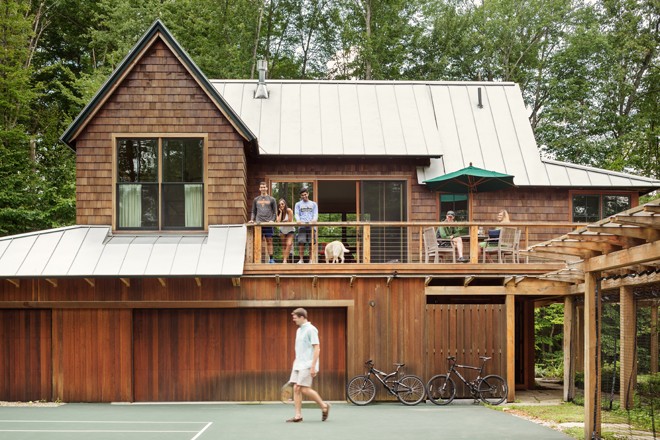 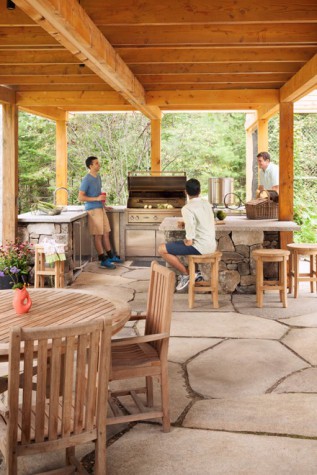 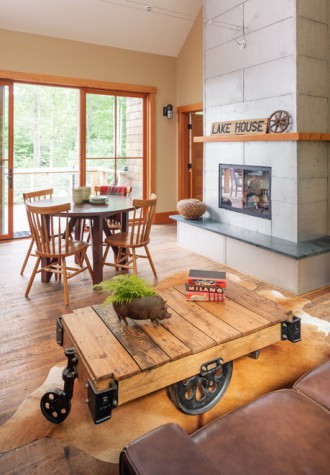 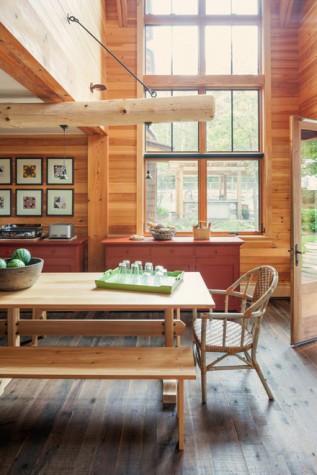 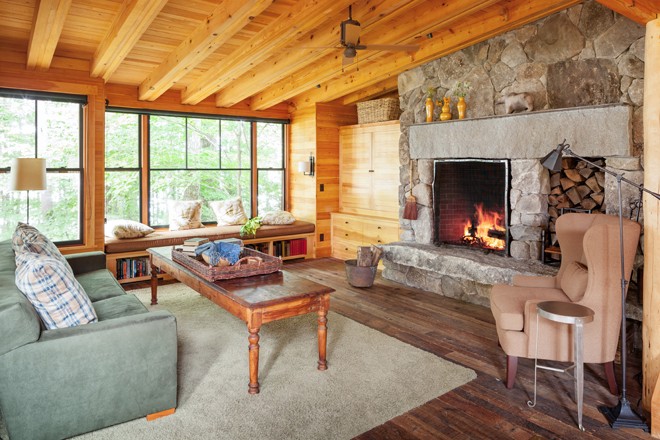 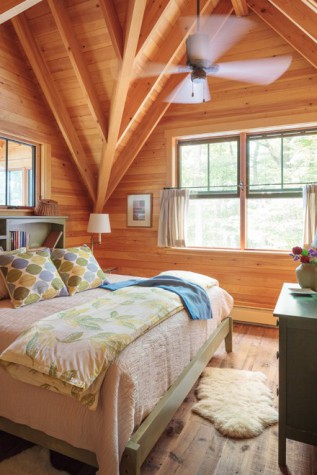 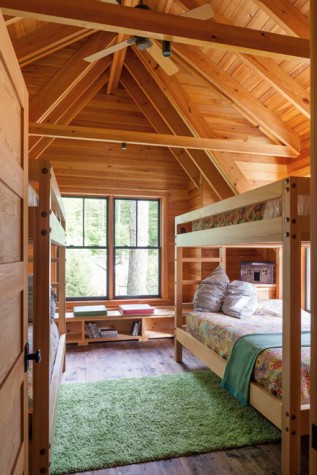 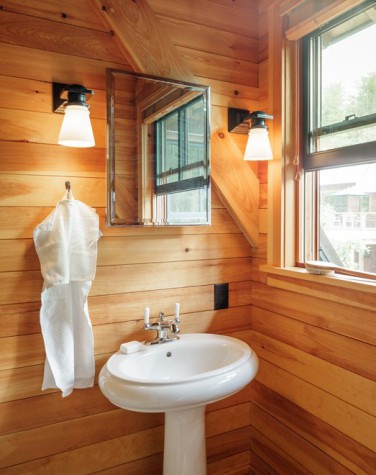 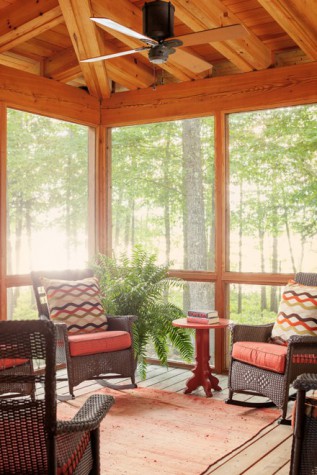 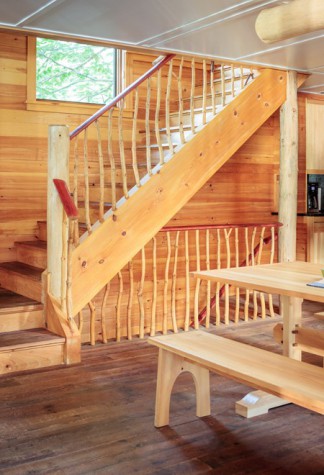 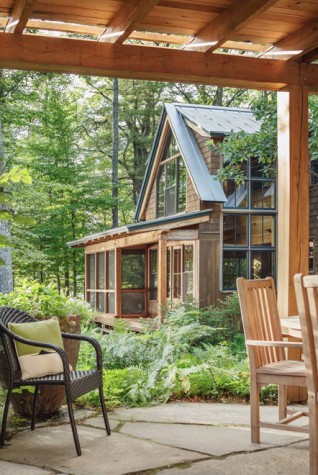 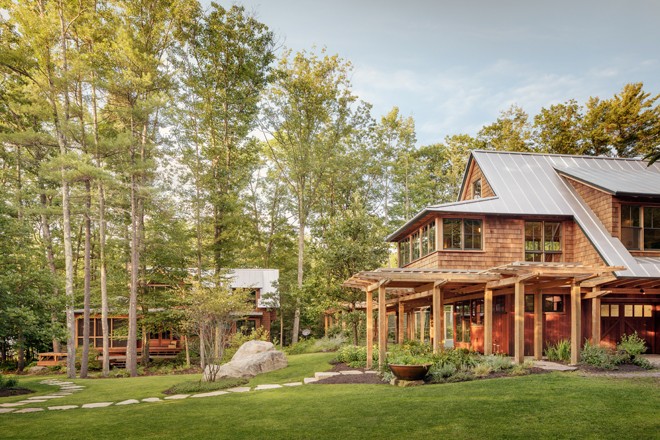 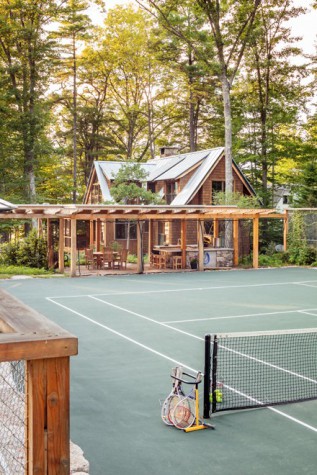 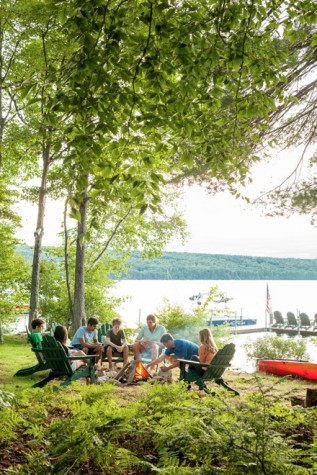 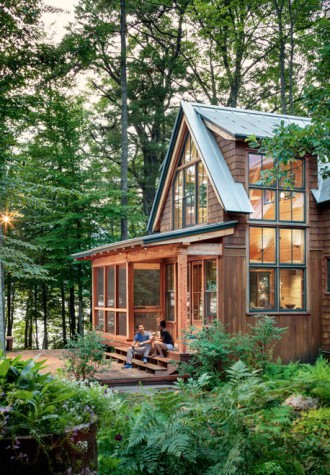 A compound anchors a family on Oxford’s Thompson Lake

If you build a vacation home in Maine, they (meaning everyone you know) will come. Anticipating the crowds, Nina and Andy Bacas made a game-changing decision: instead of housing all of their visitors under one roof, they would give their guests separate houses. Their property on Thompson Lake in Oxford, known as Fish Hook Camp, consists of three structures: the original camp that came with the lot, referred to as the Cookhouse, an airy center building called the Guesthouse, and a garage with a lofty living space overhead and an adjoining tennis court, dubbed the Courthouse. “It’s wonderful to have everyone together without always having to be together,” says Nina, who keeps track of the comings and goings on a large whiteboard calendar in the garage.

The Virginia couple has a longstanding connection to Maine’s lakes. As a child, Andy spent summers at his grandparents’ cottage on Taylor Pond in Auburn, and his family later rented on Little Sebago Lake in Raymond. When he had a family of his own, he continued the renting tradition, first on Little Sebago, then on nearby Crescent Lake, and finally on Thompson Lake. One rainy day in 2008, Nina noticed a for-sale sign lying in a ditch and, on a whim, decided to check out the property. “I knew instantly, ‘this is it,’” she says of the flat, grassy expanse with little sandy paths leading into the lake—ideal terrain for the couple’s four kids. A giant “porthole” composed of pine and maple branches frames the view: a shining half-dome of lightly rippled water edged in green. The fact that the site faces due west is the proverbial cherry on top—as the sun dips behind the blackened shoreline in the evening, the sky becomes a masterpiece of pastel shading.

Forty years earlier, Andy’s dad, a part-time real-estate developer, had nudged his son toward Thompson Lake. Marveling at the relative seclusion and acres of level shorefront on the eastern side, Richard Bacas, who was in a wheelchair, would say, “this is the place to be,” remembers Andy. “There’s a big emotional component to this purchase. We hope that it will be an anchor for our family for generations, a spot that our kids, and someday our grandkids, will return to year after year.” Although Richard passed away before they discovered the property, “it’s sort of ingrained in us to always have a home that’s handicap-accessible,” says Nina, who acknowledges there’s comfort in knowing he could have wheeled around freely.

The idea of a four-season compound emerged during talks with Portland architect Will Winkelman. Adding onto the modest, existing camp was an option. But by allowing for “breathing room” in the layout, and among people, “we felt we could create a richer place,” he says. The resulting triad, centered around a shared courtyard, “draws you into the landscape and emphasizes outdoor living.” To tie in the old camp with the new structures, Winkelman, working with builder Nate Holyoke of Bucksport, redesigned the entryway with a gable roof and sheathed the exterior in matching western red cedar shingles and shiny steel roofing. Varying arrangements of dormers and peaks distinguish the buildings, while weathered flagstone pathways and a tamarack pergola, which partially covers the gap between the Guesthouse and the Courthouse, create connectedness.

In the Guesthouse, a soaring clerestory entry gives way to the compound’s primary living and dining spaces, anchored by an 8-foot-long distressed-wood coffee table and a custom pine trestle table that spans 11 feet. The house has a pine- paneled kitchenette and is adjacent to an outdoor kitchen, but zoning laws prevented the couple from installing a full kitchen inside the structure. The Cookhouse, where the Bacas family stays, has—you guessed it—the only interior kitchen on-site. In the evenings, the family often heads over to the Guesthouse to sit by the massive, freeform granite fireplace or watch a movie in the downstairs rec room. If they have guests, “we’ll eat with them at the big table or we’ll say, ‘let’s go over to your house after dinner,’” says Nina.

Cocktails frequently happen on the deck of the Courthouse overlooking the tennis/basketball court. The garage below, which has doors that open onto the court as well as the driveway on the other side, houses the requisite gear, along with a ping-pong table, bicycles, and paraphernalia for fishing, badminton, and archery. Near the dock where the family keeps a motorboat are water skis, kayaks, sculling boats, paddleboards, a canoe, and a Sunfish sailboat. The couple’s children, who range from 12 to 22 years old, are athletes, and “I’m not a lounge-on-the-beach sort of fellow, so when we’re here, it’s basically family summer camp, with yours truly as counselor for outdoor activities,” says Andy.

The tennis court presented a particular design challenge. The team, which included Saco landscape architect Todd Richardson, talked about putting the court at the far end of the lot, but ultimately decided to “stitch it into the heart of the complex,” says Winkelman. A U-shaped stonewall, crafted from granite boulders unearthed during the excavation and topped with fencing, “nestles the surface in.” The garage building, designed with sturdy shiplap siding on the lower half, a pergola (equipped with drop-down netting), and additional fencing form the rest of the enclosure.

Recurring materials—soapstone countertops, reclaimed barnboard flooring in the two new structures— link the camp interiors, but each has a distinct personality. The Cookhouse, built in the early ’70s with smallish rooms, is simply furnished with slipcovered sofas and unfussy antiques for “a cozy, fishing-camp feeling,” says Washington, D.C., interior designer Michael Roberson. In the Guesthouse, bold, rustic touches balance the open plan. The central staircase features chunky log posts and twig balusters “that look like they’re growing there,” says Holyoke of the artful lineup, which conjures the twisted tree trunks in Van Gogh’s Undergrowth paintings. Another log, suspended over the dining table and studded with pendants, extends into the clerestory, bridging the flat and vaulted ceilings.

In the Courthouse living area, a fireplace encased in the same galvanized steel used on the roofs rises like a skyscraper to meet the cathedral ceiling. “Nate, Will, and I came up with that concept on the fly—it’s fun to take something basic and think, ‘what else could it be?’” says Roberson, who matched the cladding with other modern, metallic elements, including disk- shaped cable lights and a commercial-style ceiling fan, that feel at home in the loft-like space.

The compound’s seven bedrooms, furnished with king, queen, and extra-long twin beds—“we’re all tall and we are expecting tall descendants,” says Nina—can sleep 20 people. “But what we’ve found in the Courthouse is that kids like to pull their mattresses into the living room and watch TV all night.” Part of the beauty of camp, after all, is living by a relaxed set of rules. And if you designate one building for sleepovers, you can blithely look the other way.