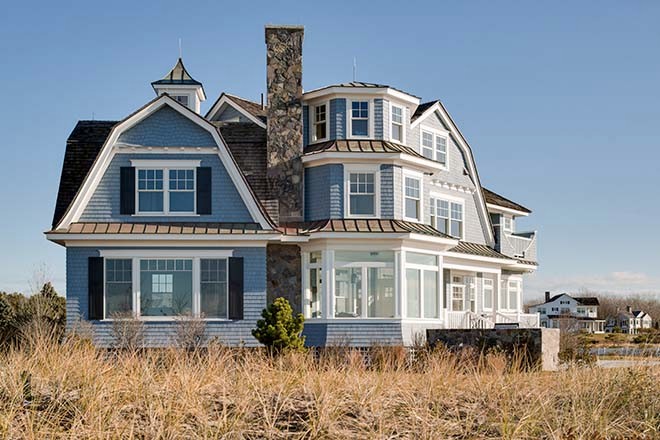 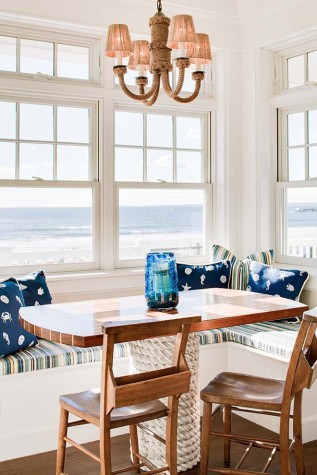 The kitchen table and banquette are reminiscent of an upscale galley kitchen. The top of the table is teak and holly; the base is wrapped in rope. 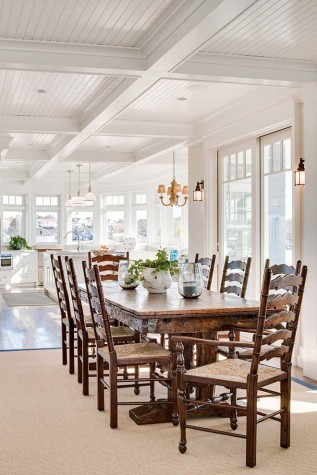 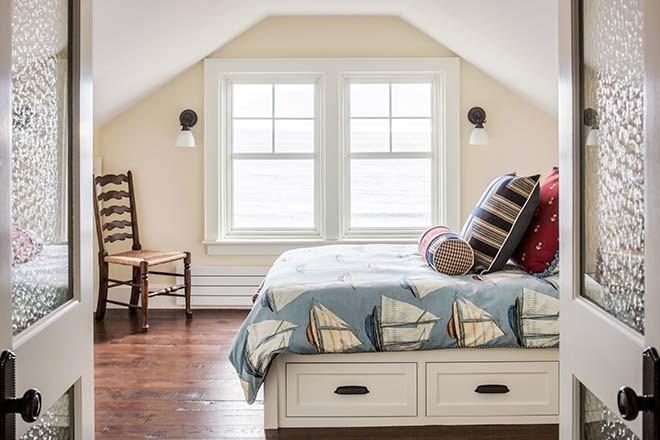 A built-in bed with drawers underneath. The nautically themed Eastern Accents linens were procured through Hurlbutt Designs. Pebbled glass on the doors keeps the room light while allowing privacy. 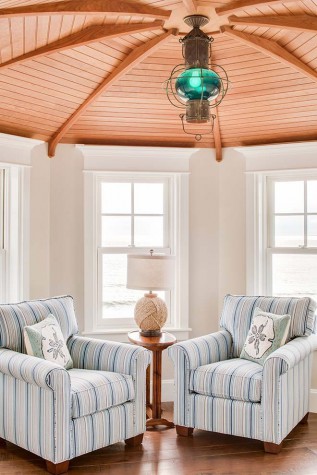 A turret room with a ceiling made of cherry. The nautical rope lamp and the Mitchell Gold and Bob Williams chairs are from Hurlbutt Designs in Kennebunk. 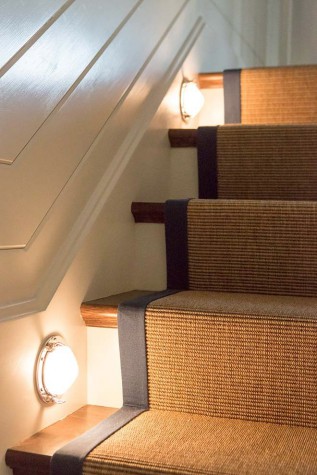 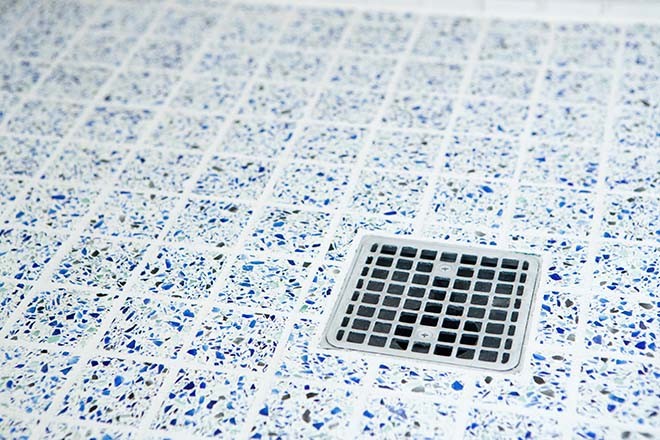 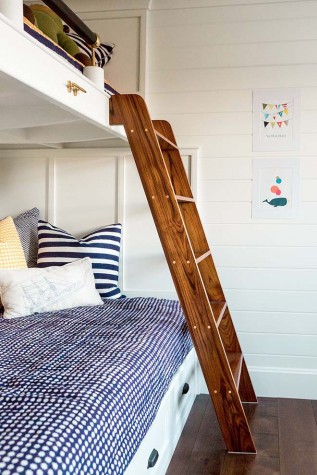 Thomas & Lord Builders built this bedroom, which is designed to feel like a bunkroom on a ship. Nautical details include a teak ladder, the curved underside of the top bunk, an ash upper bunk bar, and a gold ship cleat for hanging items. Nicki Bongiorno used Roberta Roller Rabbit linens and pillows for the beds, as well as a pillow with a ship design from Thomas Paul. All these items are available in her store, Spaces Kennebunkport. 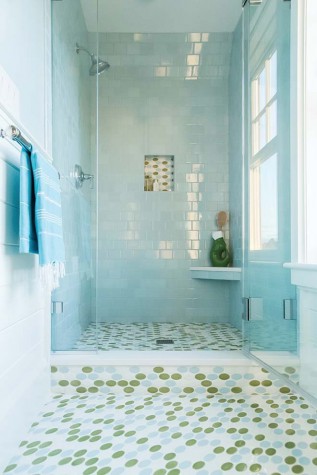 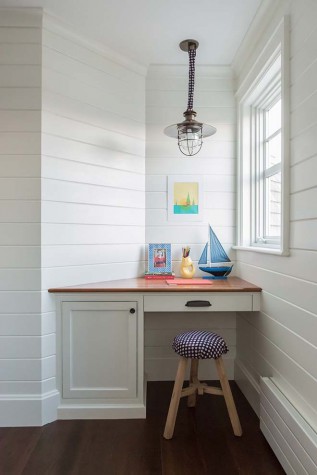 A teak-and-holly desk is built into the corner of the bunkroom. To add color, Nicki Bongiorno added a fabric sleeve to this lamp from Visual Comfort. 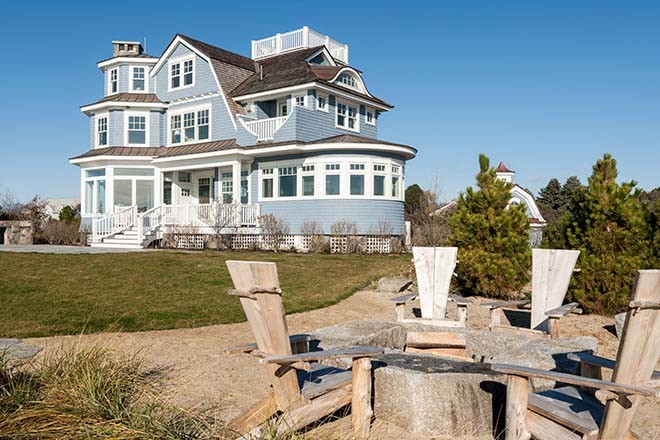 A fire pit is surrounded by Adirondack chairs made by Steve Doe of Whitten Hill Studio. The stepped octagonal tower at left serves as a pivot point for the house's overall design, allowing some of the rooms to face down the beach and others to face up. 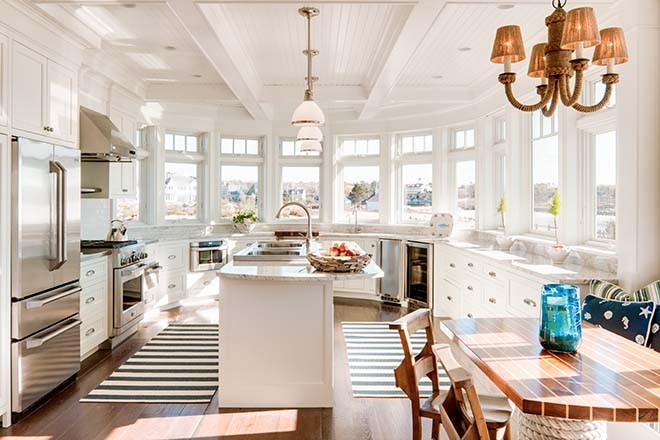 This classic kitchen was designed to suggest a ship's prow. The countertops are of Valley White granite. Other nautical touches include the rope chandelier above the table and the navy seashell and seahorse pillow behind. 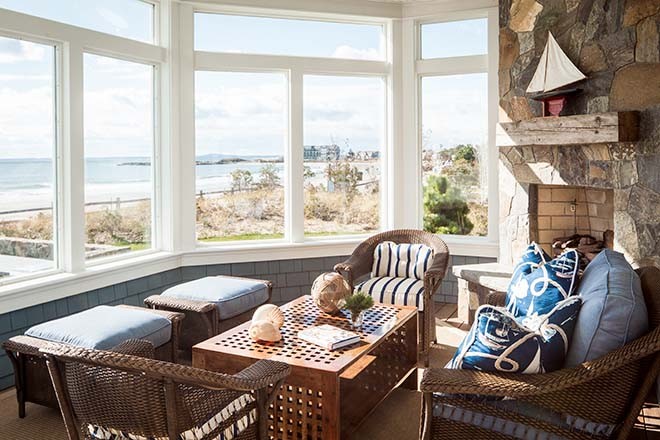 An octagonal screened porch with views of Kennebunk's Gooch's Beach. The fireplace is made from stone similar to that employed at the nearby Franciscan monastery. The reclaimed wood of the mantel comes from an old house in the neighborhood that was torn down for new construction. The wicker furniture and the ship's-hatch table are from Hurlbutt Designs in Kennebunk. 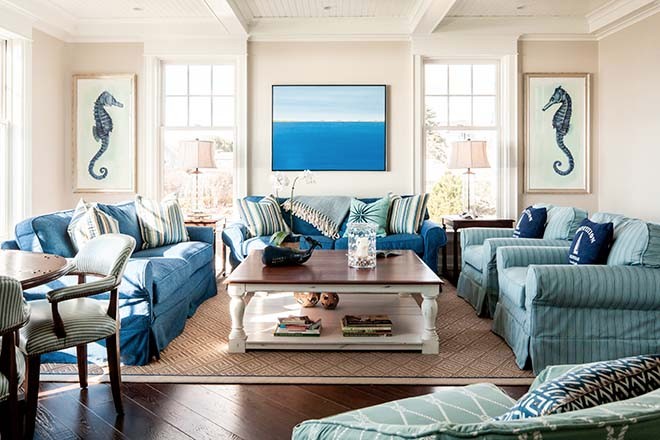 The living room features a painting by Canadian artist Frances Lipari and two seahorse prints by an unknown artist, both from Hurlbutt Designs. The large coffee table is by cabinetmaker Derek Preble. The upholstered furniture is slipcovered in Sunbrella fabric for a casual look. To the left, the striped chairs at a game table have been vinylized so children can do puzzles and play games while still in their bathing suits. 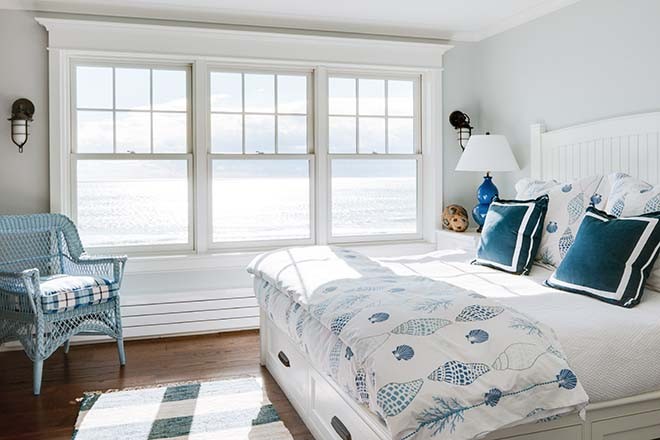 The master bedroom with grand views of Gooch's Beach. The built-in platform bed with campaign-style pulls has Harbor Island bedding from Matouk. The wicker chair was repainted by Hurlbutt Designs, who added a custom chair cushion. The porcelain lamp is also from Hurlbutt Designs. The striped rug is from Barrier Island. 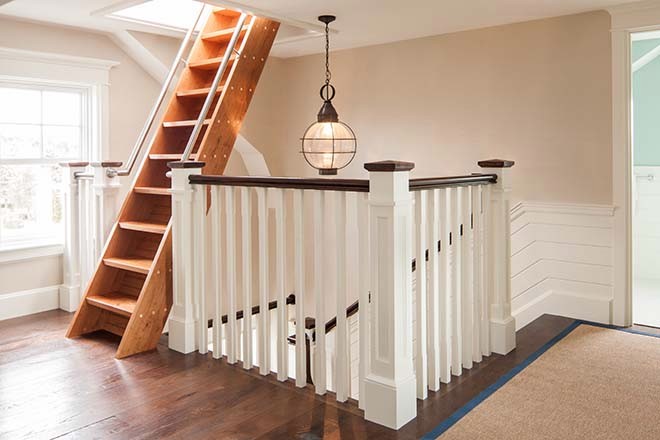 A ship's ladder made of cherry and stainless steel leads to the widow's walk. 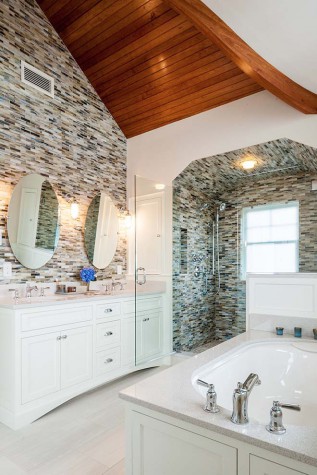 Nicki Bongiorno chose these master bathroom tiles because they reminded her of the interior of mussel shells. The cherry ceiling suggests the interior of a ship. Biddeford's John Bergeron ("The Glass Guy") made the custom mirrors, glass shower door, and frosted window in the shower. The floor is porcelain, and the countertops are Caesarstone with a speck of sparkle. The lights are from the Lighthouse in Kennebunk, and all the cabinets were custom made through Thomas and Lord Builders. 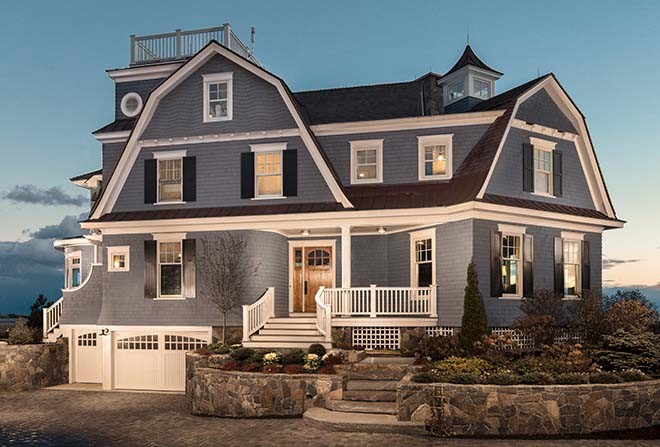 A front view of the traditional shingle-style cottage with gambrel roofs, a widow's walk, and porthole windows.

Since 1660, there has been an inn on one end of Gooch’s Beach in Kennebunk. Since 1756, that establishment has been the Seaside Inn, run by the Gooch family and their descendants. In fact, the current owners are ninth-generation innkeepers, which makes the Seaside Inn the oldest continuously operating family business in the country. In 1959, a ranch house called The Dunes was built next to the inn and by 2001—when a Wisconsin bond manager, his wife, and two children were visiting the Kennebunks—the house was available for rental. The family rented each August till 2009, when the Seaside Inn’s 20 acres were subdivided, and the house came up for sale. “We love that beach. We love that community,” the husband says. “We had to buy it or say goodbye.” The property was spectacular, directly abutting the beach and with broad views up and down the coastline, but the ranch was in disrepair. The family wanted to build new, but they had to act fast, as FEMA was changing the flood maps. If they waited, they wouldn’t be able to build.

“The first step,” says architect Brian Beaudette, “was to go sea kayaking.” Beaudette, who has offices in Kennebunk and Rangeley, found his client “really personable,” but the outing was about design, not adventure. “We did the entire Kennebunk coast. Mother’s Beach, Middle Beach, Gooch’s Beach. We talked about what houses we liked and what we didn’t.”

“The house was meant to have beautiful lines and architectural details that would make it fun to look at from all angles,” says the homeowner. “I took this seriously. It’s an important property, and I wanted to build something beautiful to anchor that end of the beach.”

On arrival, one pulls into a drive made of pavers fashioned to look like cobblestones and parks in front of a small blue building with an elaborate roof. It is, in fact, a shed, but it functions like “a folly,” which, Ted Carter of Ted Carter Inspired Landscapes in Buxton explains, is an ornamental structure that serves as “a place for the eye to rest.”  Visual enticement though it may be, it’s hard to draw attention away from the main drama of the three-story house. The steps that lead up to the curving porch and through the front door are Mystic Mountain granite quarried in Maine. Instead of being the static salt and pepper of traditional granite, Mystic Mountain “has movement and life. It looks like the ocean has washed over the surface,” says Carter. As such, the stone serves as a good clue to what awaits beyond the front door: a nautically themed house that references the sea and the ships that sail on it.

The kitchen resembles a yacht with arching windows on the prow. A teak and holly breakfast table with banquette suggests an upscale galley, while upstairs there is a bunkroom with built-in beds and desk. A cherry ship ladder with stainless steel rails leads from the third floor to the widow’s walk. The home’s builder—Kevin Lord of Thomas and Lord in Kennebunkport—also built an impressive third floor turret room, which drew inspiration from a sea captain’s home. Its ceiling is finished with cherry bead board and cherry beams. The second and third floor bedrooms have built-in platform beds with bead board headboards and storage drawers underneath, as well as built-in dressers and shelves. Other nautical details include porthole windows, nautical lights at the base of the stair treads, a lighthouse- shaped newel post on the switchback staircase, and door hardware that has nautical rope detailing.

Interior designers Nicki Bongiorno of Spaces Kennebunkport and Louise Hurlbutt of Hurlbutt Designs in Kennebunk each played with the nautical theme as well. Bongiorno focused on a looser interpretation of the theme for interior finishes, paints, and material choices, while Hurlbutt went with a more traditional interpretation for furniture and accouterments. Hurlbutt opted for upholstery in a range of blues accented with pillows patterned with seahorses, fish, and starfish. She also procured items like a game table and a rope chandelier for over the kitchen table. Although the house is elegant—with a coffered ceiling and white subway tiles in the kitchen, hickory flooring, and detailed millwork–Hurlbutt and others were always aware that the house is intended for summer fun. Given this, the kitchen banquette has a blue, tan, and white striped cushion of Sunbrella fabric that Hurlbutt vinylized so people could sit on it in wet bathing suites.

In the bathrooms, designer Nicki Bongiorno let the colors of the ocean direct the palette, while she opted for less literal forms. She picked glass tiles that reminded her of sea glass for one sea-foam-colored bathroom. For another bathroom she found glass tiles that reminded her of the interior of mussel shells. For the laundry room—itself impressively engineered to include a drying rack with a metal trough for wetsuits—Bongiorno found tiles with an interlocking pattern that suggests ocean waves.

Other aspects of the house reference not the sea per se, but the area. The homeowner liked the stone used at the Franciscan monastery just down the road, so a similar stone is used for his chimney, which was built by the late Ray Dussault of Biddeford and his crew. For a different building project in the neighborhood, Kevin Lord razed an old post and beam house. Beams from that house now form two fireplace mantles (one in the living room and one in the octagonal turret’s screen porch). Steve Doe of Whitten Hill Studio in Kennebunkport used wood from the same house to make a dining room table.

One of the surprises of the house is that even though it sits on the road, next to the Seaside Inn, and by the beach, it feels private. The sight lines are such that you can sit in the living room and look right out on the ocean and not see the activity on the sand below. Landscape architect Ted Carter created a barrier of maples, flowering hawthorn, and Austrian pine between the home and the hotel, and one of flowering hawthorn between the home and the street. He also created a mini-beach setting on the property with sand and grasses that surround a wood-burning fire pit that is fueled through a gas feed from the house. After Carter allocated a certain amount of the property to the dune system as required by the Department of Environmental Protection, he picked plants that could thrive despite the dehydration and windburn that occurs on beachfront property. In addition to the maple and flowering hawthorn, he planted Rosa virginiana, tall ornamental grasses, and mugo pine. Where there had once been a chain-link fence, there is now a split post and rail western cedar fence surrounded by Rosa virginiana and bayberry.  M. Welch and Sons of Arundel excavated the site and worked hand-in-hand with Ted Carter on all aspects of the landscaping.

Though eager to build before FEMA redrew flood maps, the homeowner was mindful of the dangers of the location, of how much exposure he would have in a major weather event like the severe nor’easters that periodically pound the Maine coast, so he says he went “well beyond code” to make sure that the house would not only be safe, but last for generations. Because there was a peat bog under the house, Kevin Lord couldn’t pour a conventional foundation. Instead 30 pilings had to be driven over one hundred feet into the earth to hit bedrock. Then, when the house was attached to the one million pounds of concrete in the foundation of the house, the homeowner didn’t want epoxy anchors—which are fine according to code—but the sort of heavy-duty mechanical anchors that are used in nuclear power plants. The house, the homeowner says, “was thoughtfully over-engineered for strength and longevity.”

It was what he felt he had to do, because he was building not just a house but a heirloom. The choice to use geothermal heating and air conditioning instead of fossil fuels reflects the same desire. The homeowner wanted his children, his children’s children, and beyond to enjoy the house. The house looks back and forward, anchored in the traditions of the Kennebunk coastline cottages where he built (as well as those  of his immediate neighbors) while creating a property that aims to stay in the family for generations to come.