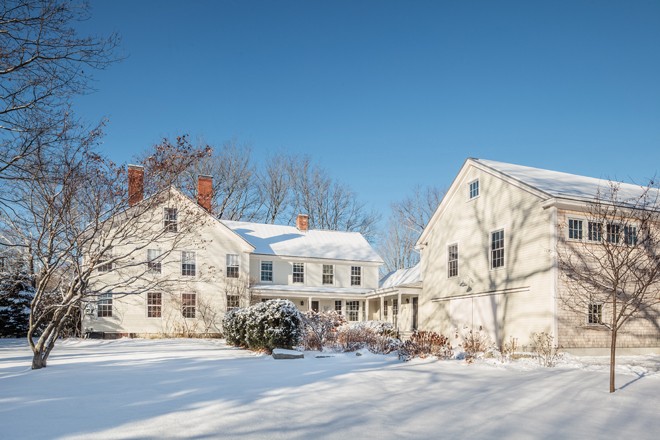 Looking at Grace DeGennaro and Jerry King's home, it's nearly impossible to distinguish the new construction from the old. The barn, by Maine Post and Beam in Freeport, features a traditional mix of clapboards and cedar shingles, but the boards are made of low-maintenance fiber cement. 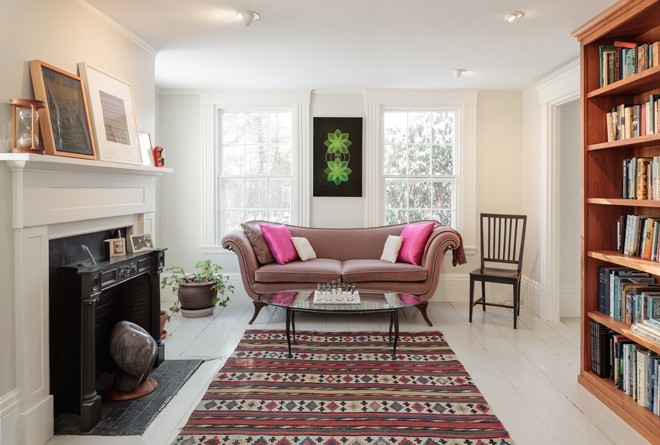 In the library, Martian-green vesica piscis motifs in DeGennaro's painting Blueprint shine above earthier elements, including a hand-woven, circa-1900 rug from central Asia the homeowners purchased at Sarajo in Portland and a marble sculpture by Rosemary Burwell of Freeport. 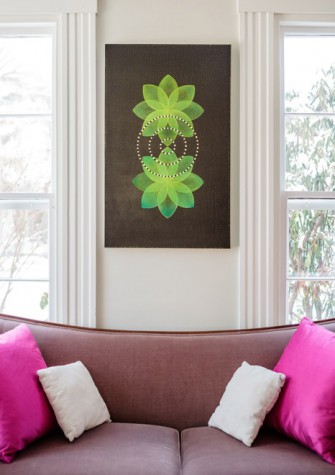 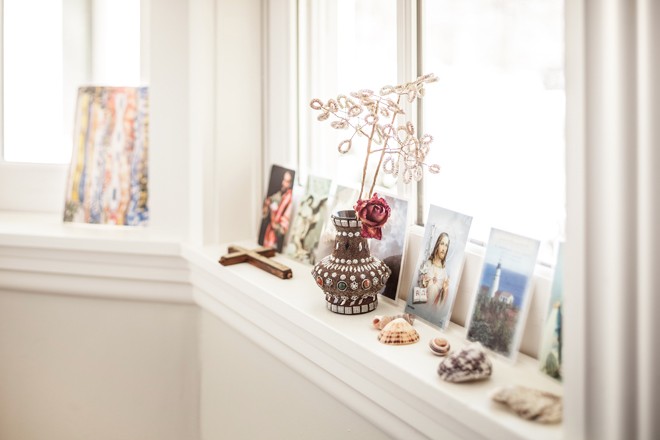 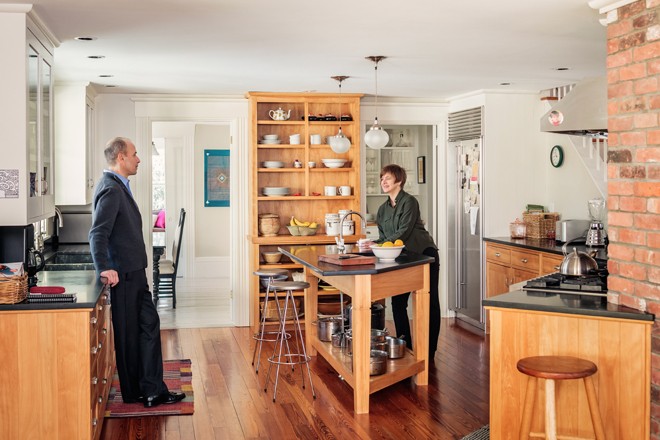 DeGennaro and King in their kitchen, which features heart pine flooring from Longleaf Lumber, red birch cabinetry by Harraseeket Woodwrights in Freeport, and soapstone countertops from Morningstar Stone and Tile in Topsham. The doorway at left "transports" you to the original nineteenth-century end of the home. 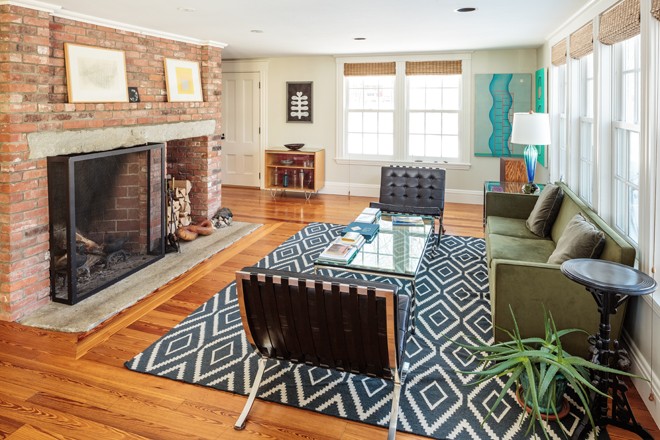 In the living area a diamond-patterned West Elm rug references DeGennaro's current work and offers a counterpoint to the room's organic forms, including the riverlike motif in her painting Platform and a botanical monoprint by Philip Taaffe. The Ludwig Miles van der Rohe Barcelona chairs are from DeGennaro Modern on Long Island, New York, a company owned by DeGennaro's brother. 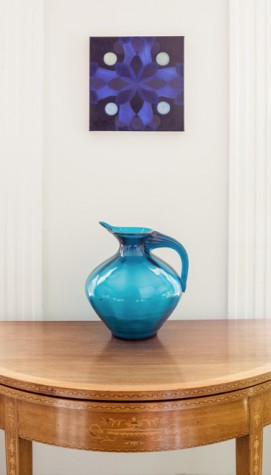 This circa 1927 Italian vase once belonged to King's grandmother; it now sits below DeGennaro's Four Rivers in the study. 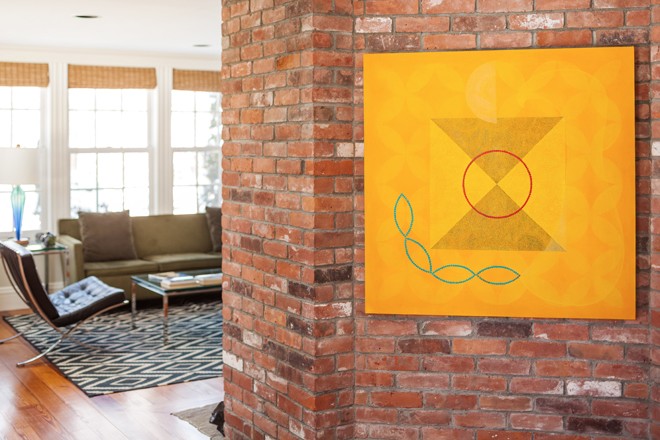 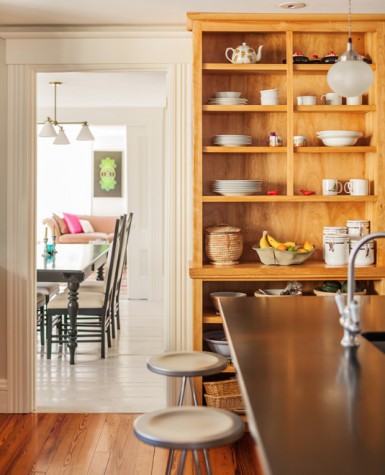 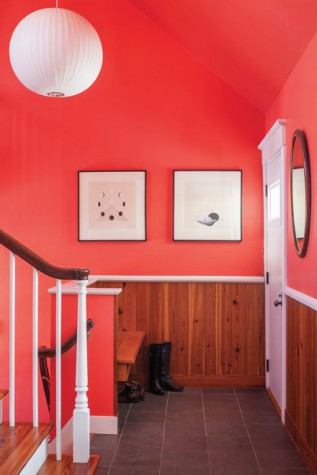 In the entryway, Dark Salmon paint by Benjamin Moore is juxtaposed with DeGennaro's drypoint prints Phases of the Moon and Pyramid and George Nelson's moonlike ball pendent, creating a balanced, day-and-night effect. 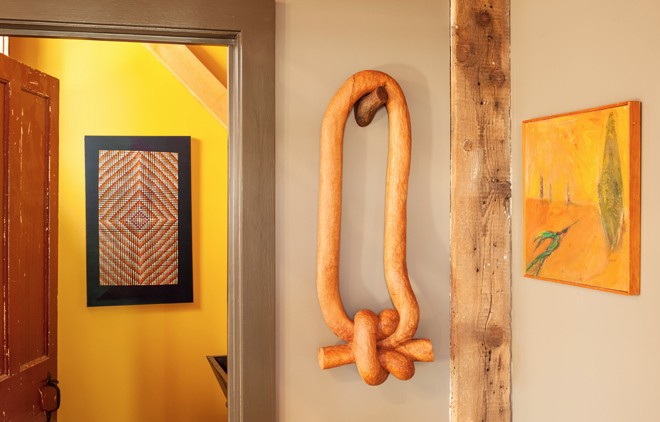 In a barn bathroom, DeGennaro's Weaving 2 conjures a blanket hung to dry in the bright sunshine - here simulated by California Paints' Curry shade. At right is a wooden knot by Portland sculptor Lin Lisberger and another painting by DeGennaro, Hummingbird. 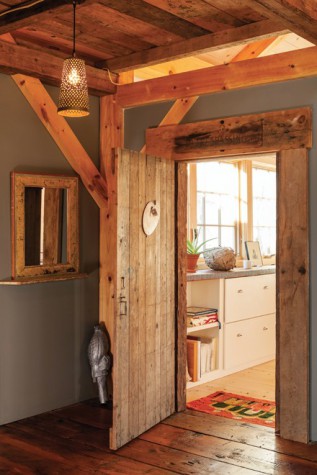 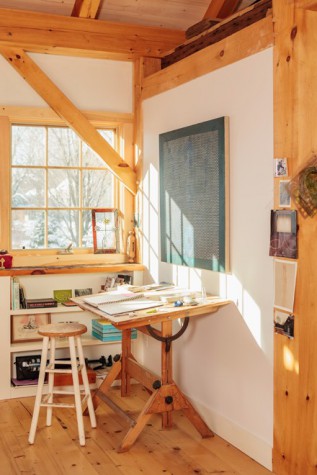 In her studio, beneath a painting aptly titled Dreams, DeGennaro jots down thoughts and ideas for future projects in a journal. 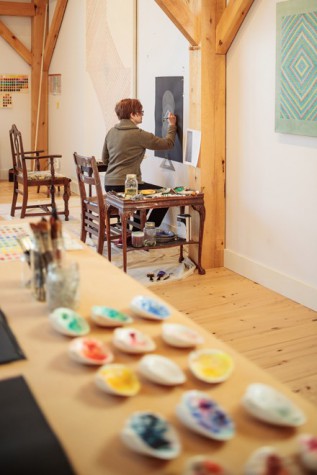 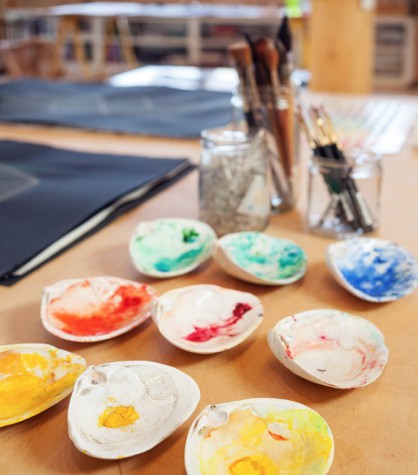 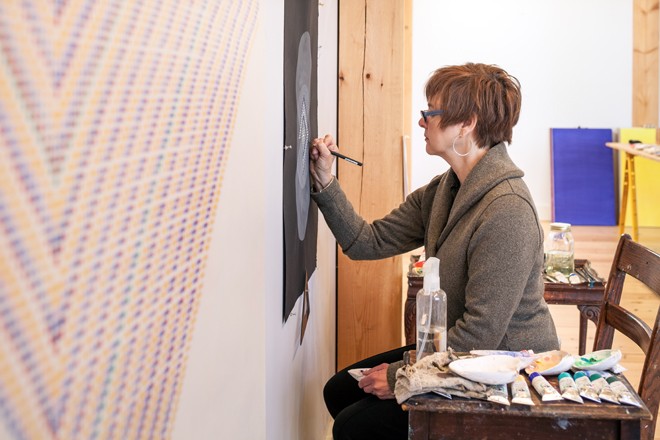 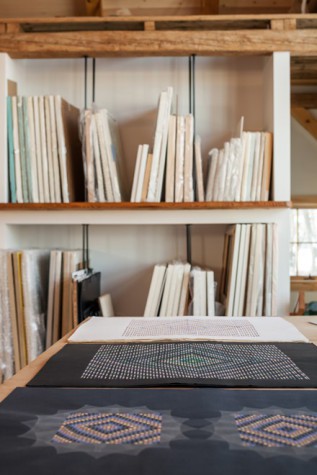 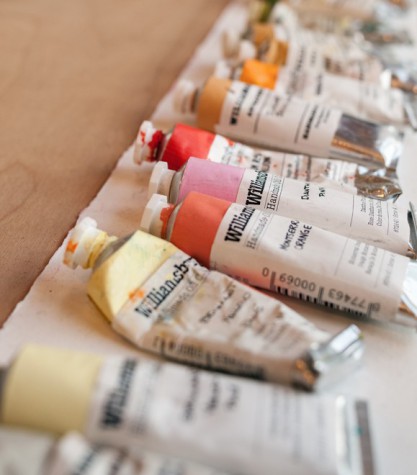 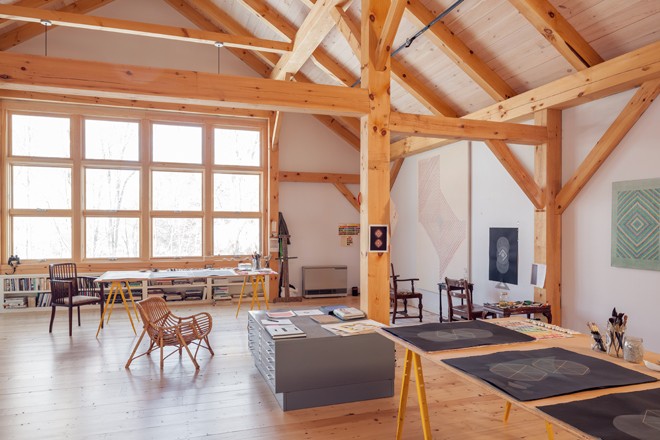 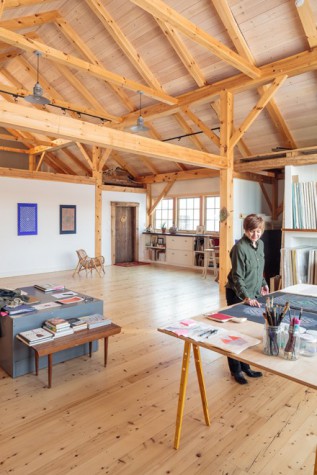 DeGennaro pictured in her barn studio with watercolors from her Continuum series; on the far wall are two variations in oil. For the room's palette, she chose white and shades of straw: golden pine timbers, pale blonde salvaged spruce flooring from Longleaf Lumber's Berwick mill, and a dark pine door reclaimed from the old barn. 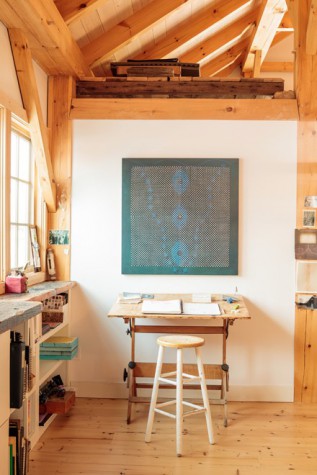 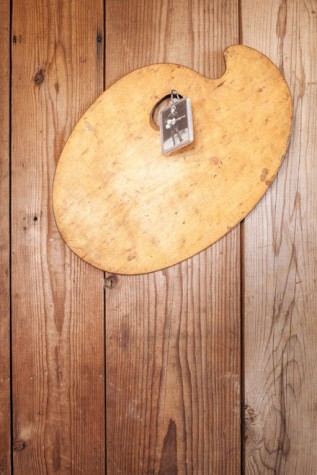 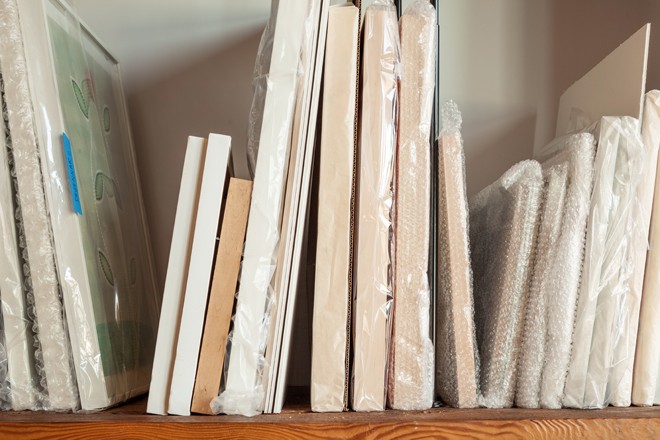 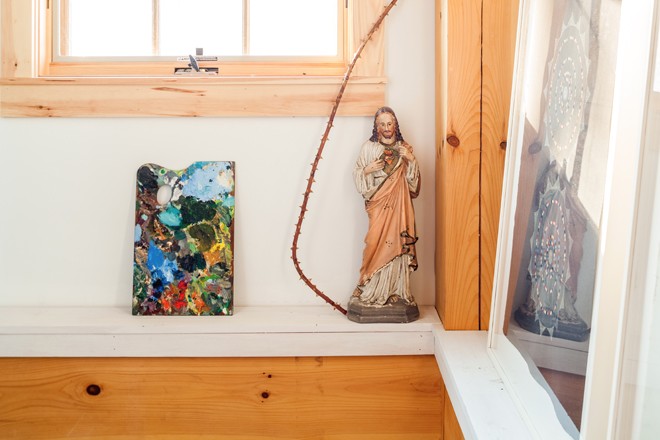 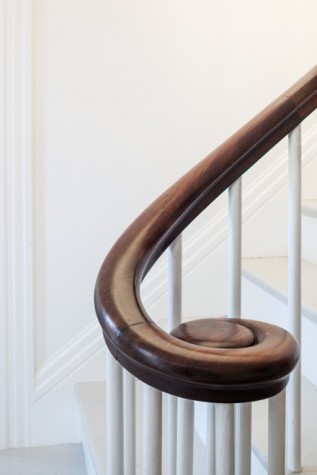 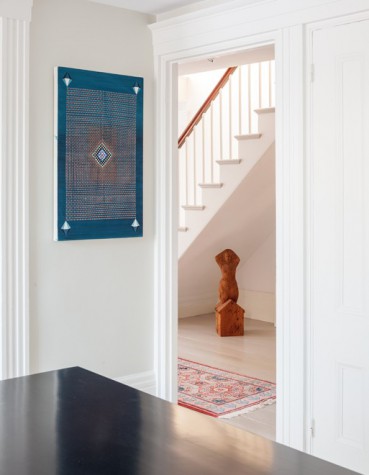 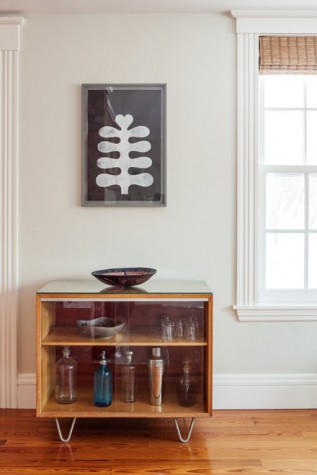 A Yarmouth farmhouse, respectfully redrawn for a painter and her family

In Grace DeGennaro’s soaring home studio in Yarmouth the art is, quite literally, moving. Or it appears to be. Each oil painting in the stunningly bright series, which features a pointillistic God’s-eye motif on different-colored canvases, plays a part in the performance. On magenta, the pattern leaps forward or recedes depending on your angle. On indigo, the varying shades of blue that form the central core “flash” light and dark, conjuring a beating heart. And in a massive unfinished work on ivory, thousands of white, pink, purple, yellow, and green dots swarm like bees on a hive.

To give the series, entitled Continuum, its kinetic quality, DeGennaro, who is represented by Aucocisco Galleries in Portland, deftly juxtaposes colors and hand paints each tiny circle, creating imperfect, quivering rows. The resulting images radiate outward, recalling the rings on a tree stump or ripples on water. “I view the work as a metaphor for growth—the way we take on different shapes and layers of knowledge in a lifetime,” she says.

Or the way a home evolves, bit by bit, over the years. For DeGennaro, that process began in 2000 when she and her husband, Jerry King, a software entrepreneur, reconstructed portions of a nineteenth-century Yarmouth farmhouse to suit the needs of their young family. In 2012, with their two sons off on their own, the couple added the latest “layer”: an expansive post-and-beam barn that includes a garage, “man cave” for King, and DeGennaro’s 1,000-square-foot light-filled studio.

In its earliest iteration erected in 1820, the home was a center-hall Colonial with a detached barn. In 1850 the house was renovated in the Greek Revival style, with wider six-over-six windows, four ornate cast-iron fireplaces, and slender chimneys. Later, the owners added on, creating a structure that could have been plucked from the pages of Big House, Little House, Back House, Barn, Thomas C. Hubka’s landmark book about farmhouses in New England. When DeGennaro and King purchased the place, it had been functioning as a residence and doctor’s office, so the “back house” was chopped up into small exam rooms. More problematic: the additions were sagging atop rudimentary foundations crafted from stone pilings.

Typically constructed in haste to house a kitchen, storage, and extra bedrooms, the rear buildings in a connected farmhouse are notoriously shaky. “In most cases, they were not meant to be permanent structures,” says Rob Whitten of Whitten Architects in Portland, who worked with the couple on the first phase of their project. His advice: leave the original house intact and completely rebuild the tacked-on ell, creating an efficient envelope and modern layout—a place where the family could really “live.”

The reimagined wing encompasses an open-plan kitchen and living room, with a master suite above and an entryway and mudroom behind. Simple, period-appropriate forms and materials help marry the new with the old and maintain the casual-formal hierarchy that existed in the original home. “We didn’t want to over-renovate, putting in things that were too fancy for what was once a utility space,” says Whitten. A hulking triangular fireplace loosely based on the eighteenth-century Rumford design, known for its tall, wide opening and shallow firebox, defines the main living area. Assembled by G.M. Libby and Sons Masonry in Yarmouth, the chimney features bricks from an 1850s-era mill and a granite hearthstone from the building’s demolished foundation. The four-panel doors were also salvaged from the old structure, and the swirling heart pine flooring came from the same mill as the bricks. “Our theme was to reclaim what we could and build back up, designing something that’s ready to go for another hundred years,” says King.

At the far end of the kitchen, the heart pine boards give way to wider painted pine planks, signaling your arrival in the “big house.” Previously, all the floors in these front rooms were different colors and the walls and mouldings were done in a mix of “Colonial shades,” says DeGennaro. To create a more spacious, contemporary feel, she and King covered the floorboards in California Paints’ Battleship Gray and the walls in Benjamin Moore’s November Rain, a greenish gray used throughout the house. With its balance of warm and cool tones, the color is an ideal backdrop for art, says DeGennaro.

Against this neutral “canvas,” DeGennaro experiments with a range of palettes. In the library her painting Blueprint, which depicts opposing lime green vesica piscis motifs, hangs above fuchsia throw pillows—a complementary combination that makes each blazing color shine even brighter. In the rear living area, the analogous blues and greens of Platform and Reliquaries converge in a tranquil watery scene that is repeated, in newly abstract form, in the room’s glass tabletops. A variation on that scheme plays out in the study, with the simple pairing of purpley blue Four Rivers with a brilliant aquamarine vase from 1920s Italy. “I’m fascinated by the way colors change depending on what you put them with,” says DeGennaro.

The plan had always been to build a studio in the barn. In fact, Whitten devised a staircase connecting the home’s back entryway to a rickety hayloft, where there would eventually be a finished second floor. (In the meantime DeGennaro commuted to a studio in Brunswick.) “Life intervened, and for years we referred to that spot as ‘the stairway to nowhere,’” says King, who also had a dream of carving out a game room for entertaining family and friends.

When they were ready to get started, the couple brought in Brett Hellstedt of Maine Post and Beam in Freeport. Gazing at the hodgepodge of rotting timbers, two-by-fours and steel cables that were propping up the existing barn, “I was shocked it was still standing,” says Hellstedt, who raised an airy new structure, framed in eastern white pine, in the old footprint. His crew salvaged as much of the aged wood as possible and used it to create the floor in King’s man cave, which is furnished with a bar, billiard table, and the requisite taxidermy, as well as shelving and a set of stairs linking the studio to the garage on the lower level.

The graceful geometry of the post-and-beam style is on full display in DeGennaro’s lofty studio, where the repeated peaks of the timbers echo the shapes in her paintings. To create a blank-slate environment for her color work, she whitewashed the walls and installed pale reclaimed spruce flooring that blends with the pine framing. A giant grid of windows on the north wall and a smaller grouping on the west side flood the space with even, indirect light.

Currently, DeGennaro is making paintings in the Continuum series for a show at Skidmore College in Saratoga Springs, New York, her alma mater. When those are complete she’ll start on a fresh set of canvases, which are already painted and ready to receive their diamond motifs. “This is my project going forward—it’s infinite how many times I can change up the colors to create different results,” she says. Behind her, a rainbow-hued pattern on sage green softly undulates like a sheet on a clothesline, proving her point.