Getting to Know the Land 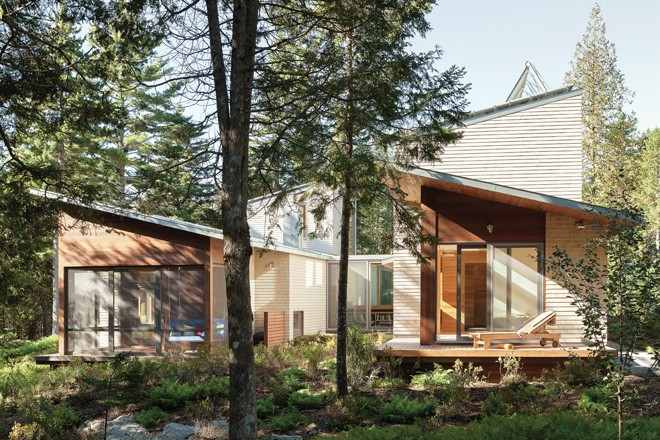 The alternating rooflines of the home are driven by the site, with roofs tipped in one direction to maximize southern exposure for solar thermal collectors and photovoltaic panels and in the other to maximize views toward the nearby pond. Nathan Merrill of Becker Structural Engineers in Portland was instrumental in the design of the cantilevered roofs and the long span over the glass doors that face the pond. Gardens grow under the two floating decks. 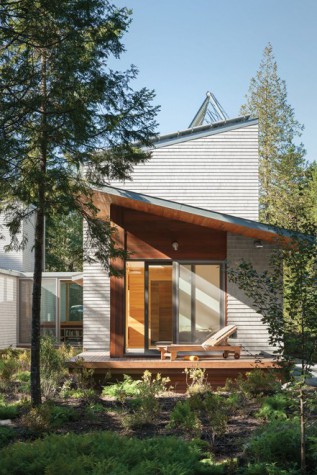 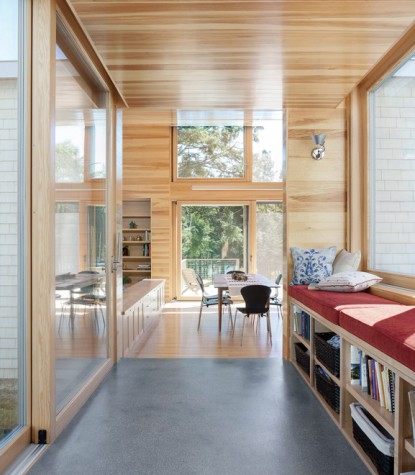 A glass connector paved in concrete separates the bedroom quarters from the living quarters. Here one can see the Danish-influenced dining room furniture and the clear, locally sourced pine that panels much of the house. 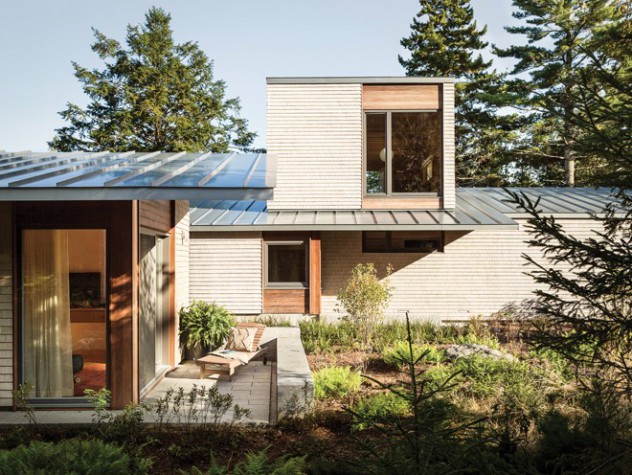 A view of the exterior of the house shows a side deck, a standing-seam metal roof, and cedar shingling. A darker wood (ipé) was used to define windows and doors. 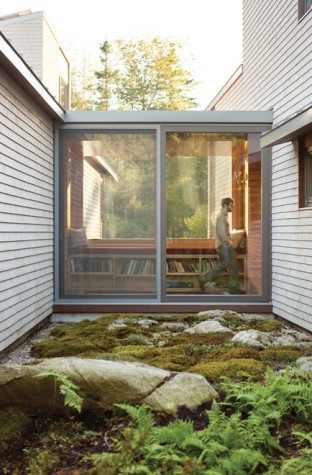 A glass bridge joins the sleeping quarters with the living quarters. There is a moss and rock garden in the foreground and a fern garden on the other side of the bridge. 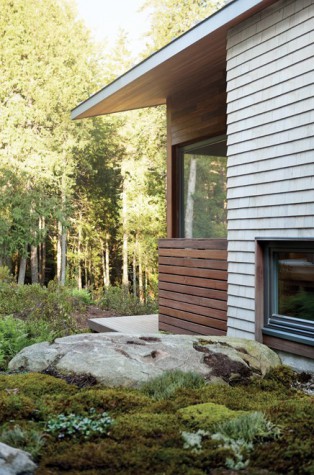 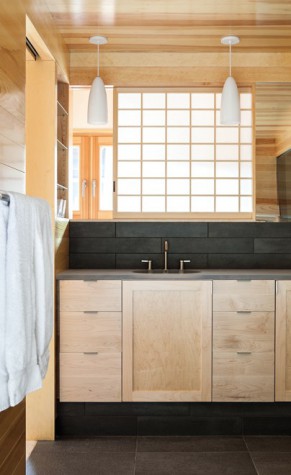 The master bathroom features a shoji screen over the sink. The pendant lights are by BEGA. The countertop is a light, translucent blue. Dark tiles for the backsplash are Royal Mosa, and the vanity and built-ins throughout the house were custom built by Duck Cove Cabinets of Bernard.

A view of a contemporary home that aims to sit sensitively on the land and that looks downhill to a pond and uphill to the woods. 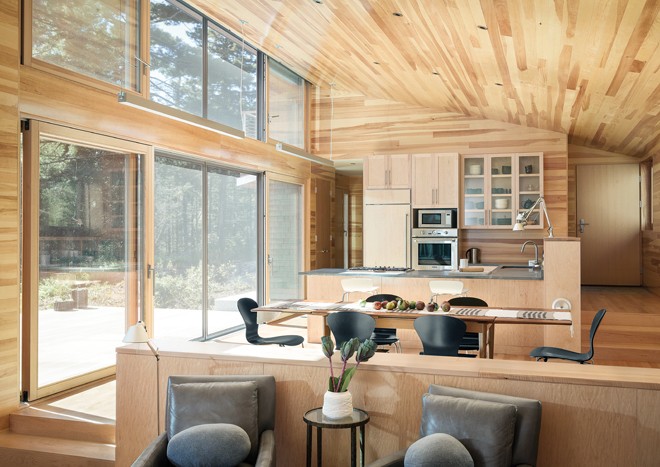 The U-shaped kitchen is big enough for two people to work, with stools pulled to the counter for guests to sit and chat. A pantry is hidden off the hallway to the left. Clerestory windows bring even more light into the space. 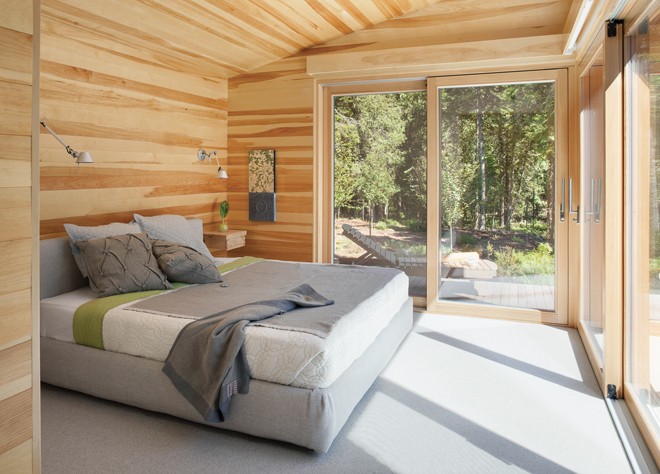 The homeowners wanted the master bedroom to be as simple as possible, so it has no freestanding furniture beyond the bed. Two built-in shelves serve as night tables. 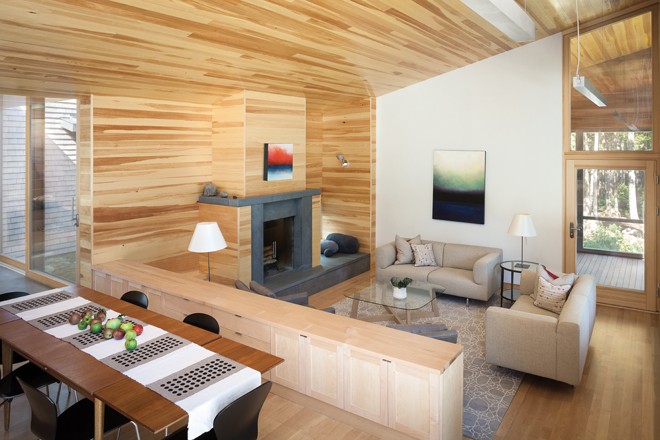 A view from the kitchen, over the dining room table, past a maple built-in cabinet to the living room space. Freshwater Stone of Orland is responsible for all the stonework inside and outside the house, including this fireplace with a continued raised hearth and an intentionally shallow firebox to throw heat back into the room. The granite used for the fireplace is called Morning Mist, and it was also used for the kitchen countertops. 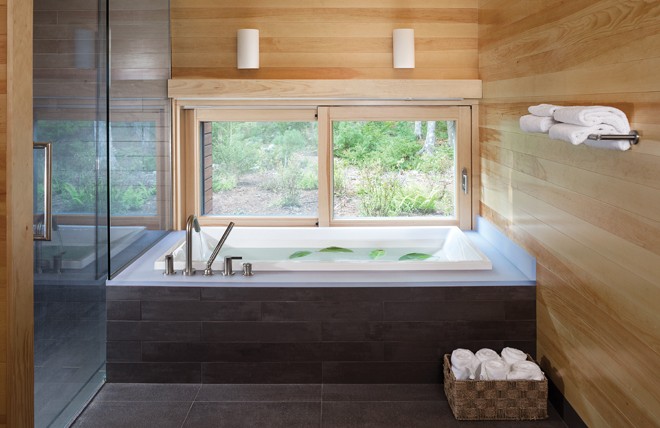 The master bathtub is a deep, wide Duravit tub with a large lip on which it is possible to sit and talk to the bather. The lights over the tub are by FLOS.

Topography drives the design of a pondside home

One might reasonably expect a startling design to start with a startling design idea, but “Pondicherry,” as the owners call their downeast home, started with walking. A lot of walking. “We spent five years before building just getting to know the land,” says the forest manager who purchased the property for Pondicherry with his wife. From the start, the two knew the basics of what they had—10 acres of forest with a pond—but dead trees obscured the subtler details of the topography. It took shoe leather, and the husband’s busy chainsaw, to fully appreciate the property’s richness. It also took a road. To determine how best to place it, the couple contacted Michael Boucher Landscape Architecture of Freeport. After consultation, there was more walking, this time with Portland architect Scott Simons, as well as Boucher. “By the time we were brought in, the homeowners already had an understanding of where the best spots were, where the prevailing breezes were, where the water was flowing, and which trees were native,” says Simons. Even so, the couple had more to consider. What moss and ferns did they want to see? What trees did they want to protect? How might a room be angled to offer views of the pond? What did the desire for solar energy mean for the home’s overall orientation? For hours, the couple, Boucher, and Simons walked slowly then stopped. What if the bedroom was here? What if the living room was here?

At first the husband didn’t picture a contemporary home on the site. “I would have been happy in a home that a hobbit would have been happy in,” he jokes. “I was imagining something with lower eaves, more of a sense of coziness than spaciousness and light.” But the wife wanted contemporary, and both husband and wife were drawn to Japanese and Scandinavian design. As for other desires, they both hoped for a modestly sized, net-zero-energy home that would produce more energy than it used. They wanted a structure that connected with the ground but sat lightly on the land. No massive stone chimneys or heavy foundations, just something that worked gracefully with the site.

To suit their needs, Simons imagined a house with two buildings—one for living, one for sleeping—joined by a glass bridge that would form outdoor spaces reminiscent of a Japanese courtyard with a moss garden on one side and a fern garden on the other. “The site gave us all the clues for the design of the house,” says Simons. “The solar orientation and views to the mountain ridge across the pond suggested the sloped rooflines. The views suggested the room layouts, and the owners’ desire to live in close connection to the outdoors gave us the spatial arrangement.”

Initially, the homeowners intended to build a single-story home with a separate guesthouse. When this proved impractical, Simons designed upstairs bedrooms and the husband’s studio to fit into two second-story volumes, which interrupt the seesawing rooflines. “Being a tree guy,” Simons says of the husband. “He wanted to be up in the trees.” The balcony outside his studio lets him get even closer.

To hug the contours of the land, the ground floor consists of multiple levels. The bedroom has steps to the glass bridge, which has steps to the dining room/kitchen, which steps down to the living room. Other steps lead to the entryway and garage. “It is nestled in the land for sure,” says the builder, Tobin Peacock of Peacock Builders in Bar Harbor.

The material choices for the house were also drawn from the site. Trees, earth, rock, and water became wood, stone, and glass. On the exterior, eastern white cedar shingles treated with bleaching oil contrast with the darker ipé used at the windows, on the underside of roof overhangs and fixed awnings, and for three floating decks. (“Floating” because the garden grows underneath them.)

Inside, most of the walls are clad in clear pine, a decision driven by the couple’s fondness for a relative’s home where interiors are similarly finished. The color variation in the wood “brings a nice energy to the space,” says the wife. “It’s almost like a painting.” Adds the husband, “It feels contemporary and clean, but because it is pine, it feels like an old Maine camp. There’s a warmth there.”  Because pure maple can have too much movement in it, Peacock placed engineered maple (plywood with a veneer of maple) over the in-floor radiant heating. Duck Cove Cabinets of Bernard used maple for the kitchen cabinets and for a long, low cabinet that separates the living room and kitchen spaces. Duck Cove Cabinets is also responsible for numerous other built-ins in the house, including the windowseat with storage that runs the length of the glass bridge and a bar-pantry behind the kitchen.

Freshwater Stone of Orland used a granite called Morning Mist for the kitchen countertops and for the living room’s fireplace surround, which has a raised hearth that extends into a window seat. A low window behind the seat perfectly frames a large boulder outside. The floor of the glass bridge is of concrete that has been ground down to reveal the aggregate. The exterior patio and several low exterior walls are granite. As for glass, it’s most evident on the pond side of the house, where there are multiple large glass doors and clerestory windows. “We put the glass where the big views are,” Simons says. “Other places we were more stingy. You have heat loss with glass.” Even so—and thanks, in part, to triple-glazed windows—the house received LEED Platinum certification, the highest performance rating that the U.S. Green Building Council gives.

The home’s palette is largely neutral, but when color does pop up, it’s often inspired by the outdoors, as with the translucent blue in the master bathroom’s countertops and the deeper blue of the backsplash and floor tile. The Japanese and Scandinavian elements of the overall design are extended with some Danish modern furniture choices, with shoji screens (above the master bathtub, on second-story windows, and for a closet door), and in the minimalist approach to decoration.

After the house was built, Michael Boucher Landscape Architecture “renaturalized the construction site,” says project manager Gretchen Giumarro. “We used all native species and tried to bring the woodland back to the house.” They also built trails and used blocks of stone to define a stream crossing that serves as entry into the property.

The couple’s year-round home is just outside of Portland. For their downeast home, they wanted a place where they could swim and hike, visit with family, and relax. “We feel extremely joyful and rejuvenated, when we are in the house and on the land,” says the wife. “It’s what we hoped for, and it’s what actually happens.”