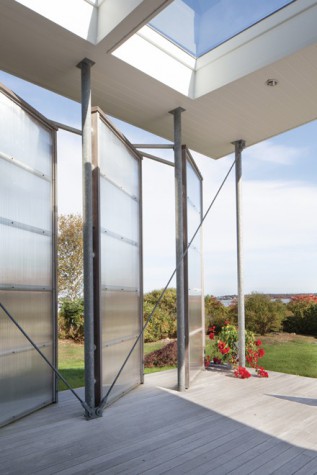 From a weathered Adirondack chair (crafted by Winkelman’s wife, Kathy Hanley) on the deck, you can look across to Long Island. To the west, the tiny island of Pumpkin Knob is visible through louvered polycarbonate panels. 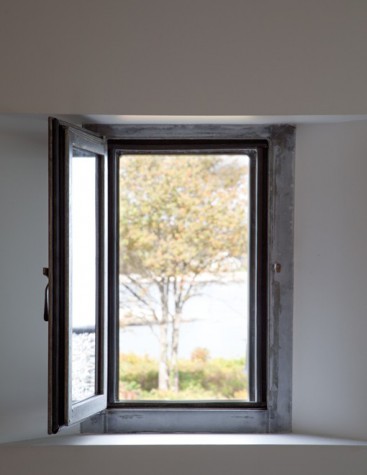 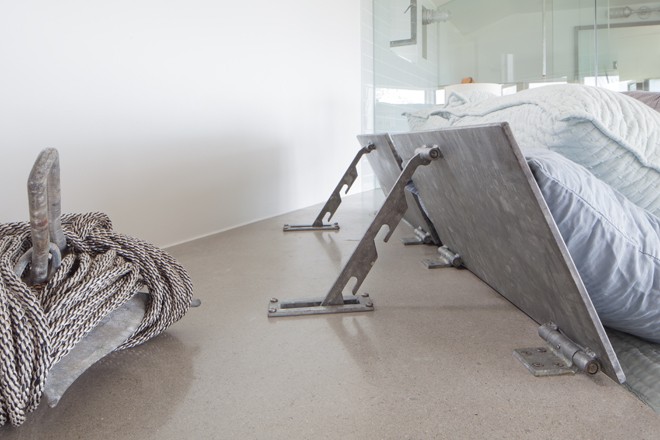 The bed’s adjustable galvanized steel headrests are another of Greene’s creations. 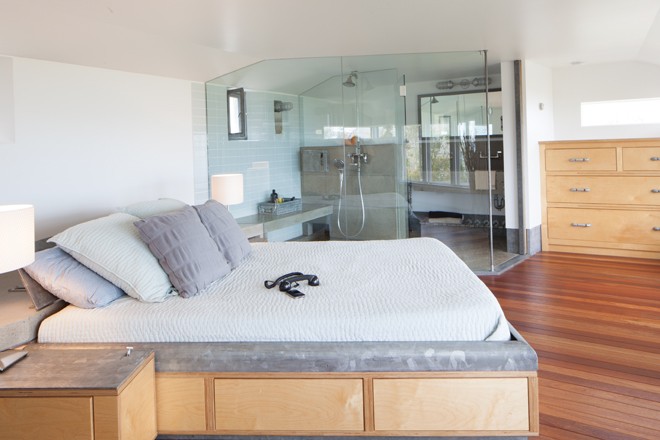 The custom Baltic birch furnishings in the master bedroom are by John Large of Parsonsfield. Tim Greene, also of Parsonsfield, created the galvanized steel accents—including bedside tabletops with holes for phone charging—from an old style of metal with large brushstroke-like flecks, known as “spangle.” In the shower area, Greene made a small wall-mounted cabinet that doubles as an exhaust vent and a casement window for one of the original spyholes. 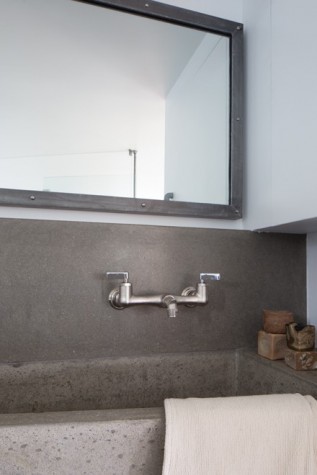 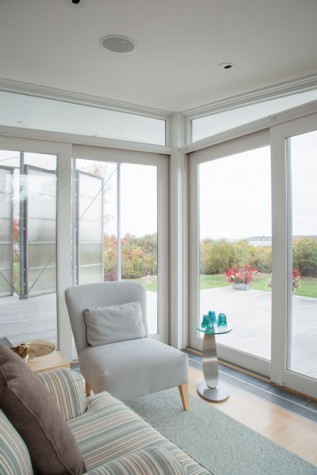 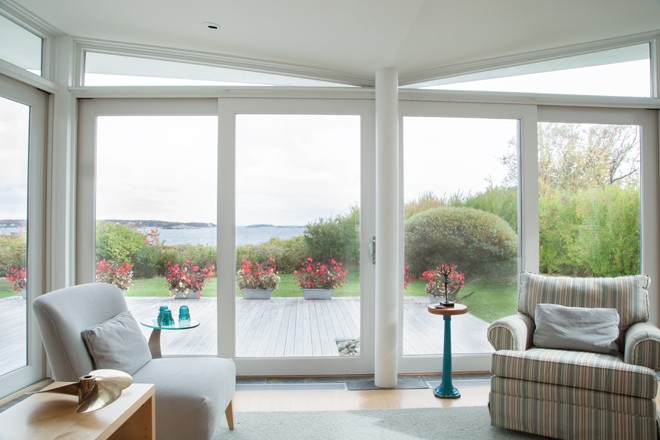 It’s common in this part of Peaks to put living spaces on the second floor, so you can see over the road that winds along the water. “But I prefer to live connected to the grade,” says Winkelman. And who could complain about this living room view? 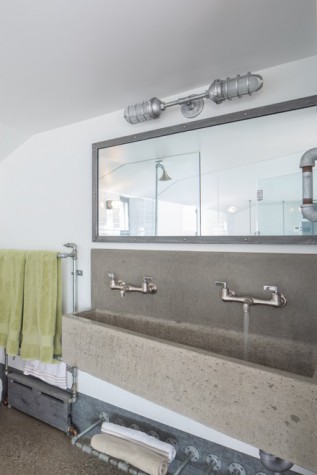 The concrete sink, cast by Jon Meade of Portland, has an angled basin that allows the homeowners to move freely in the tight space. 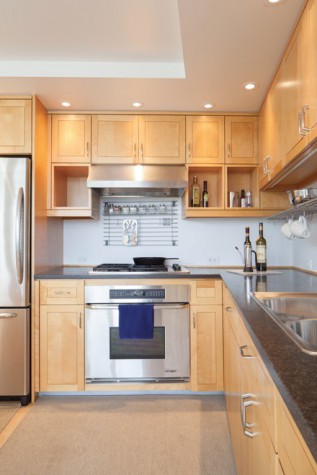 The kitchen underscores the yin and yang theme of warm wood (here, maple cabinetry) and cool metal seen throughout the house. 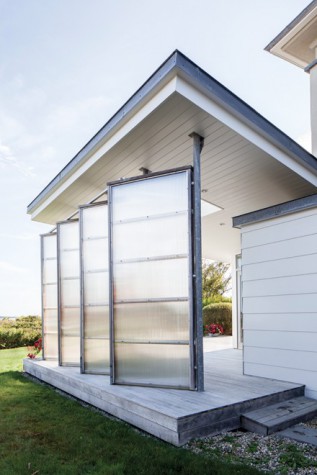 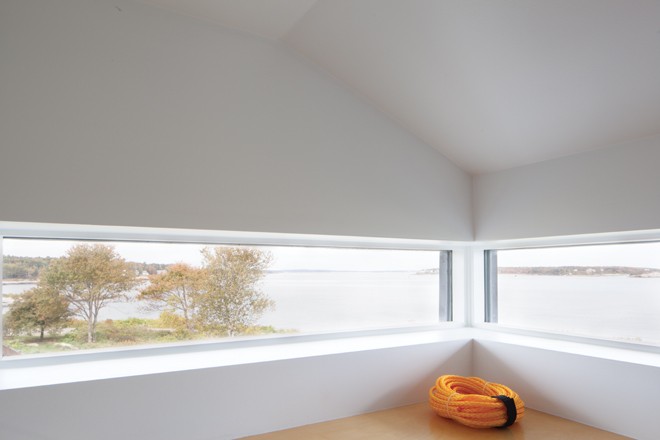 Allied troops peered through these windows in the western corner of what is now the master bedroom. 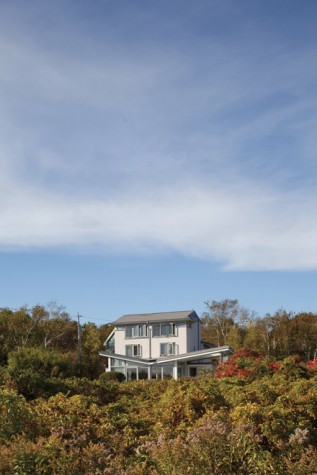 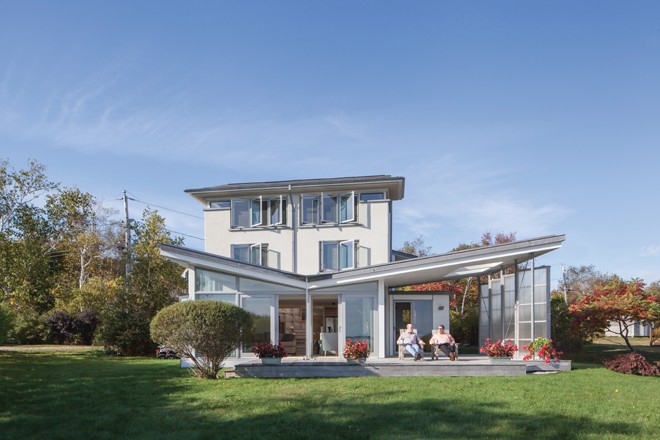 The tall rectangular structure is an original submarine lookout tower on Peaks Island. To bring airiness to the dark, cramped space, architect Will Winkelman added windows and a front entry in shapes reminiscent of birds in flight. 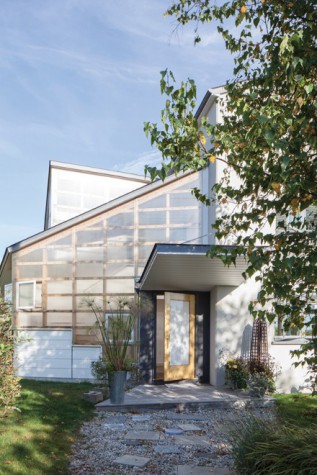 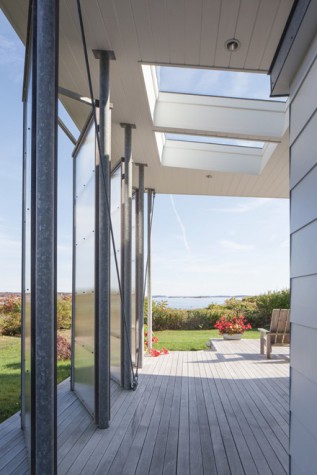 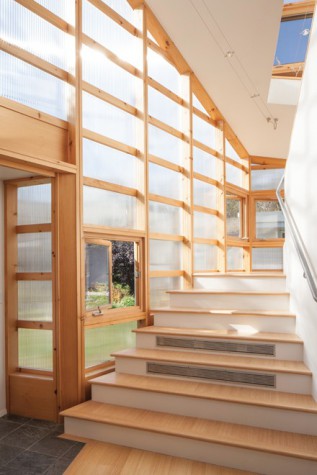 Windows set into the polycarbonate staircase enclosure have a peephole effect, providing lucid snapshots of land and sky. 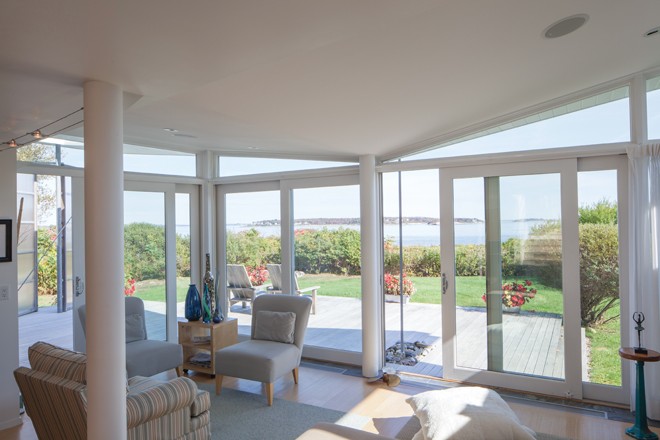 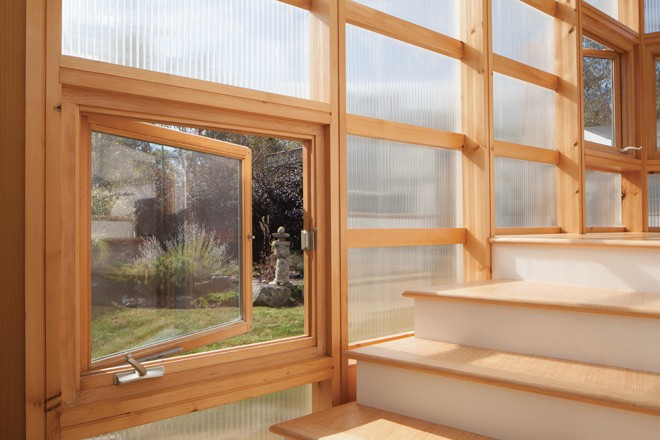 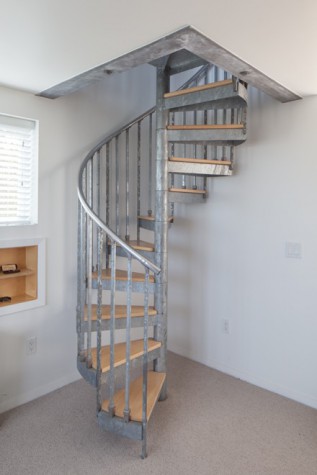 A galvanized steel and bamboo spiral staircase replaced a military ladder and helped inspire the design of the master bedroom. 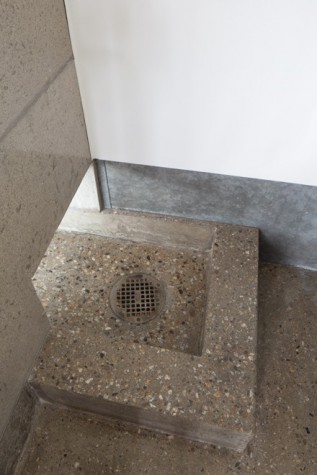 Water flows down the sloped shower floor into a drain on the other side of a concrete partition. For structural reasons, the drain had to go in this spot, where there used to be a hole in the floor providing ladder access to the downstairs. 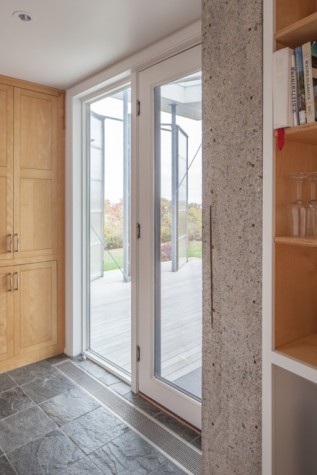 On Peaks Island, a historic lookout gets a whole new look

Soldiers watched for enemy submarines through a long sliver of a window on the third floor. From their Peaks Island perch, the men could glimpse a partial panorama of Casco Bay: the deep waters of Hussey Sound, where German U-boats might encroach, with Long, Cliff, Jewell, and Chebeague Islands stretching out into the distance. Rectangular peepholes, strategically placed on each side of the concrete structure, framed snippets of sea and scrubby land fortified with batteries, barracks, and lookout towers.

Situated on a former World War II military base on the eastern end of Peaks, the tower with the slot for spotting subs is now Jerry Boquel and Lew Hages’s home. Part of the original opening is still visible on either side of a pair of large windows on the top floor. Some of the spyholes also remain in the master suite, a formal observation room, and in a bathroom on the second story.

The 1942 tower had been substantially renovated by the time Boquel and Hages saw it in 2009. The Washington, D.C., residents had long vacationed in Biddeford Pool and were looking for a place to buy. Their criteria: “Something modern, but definitely not on an island,” says Hages. “We thought it would be isolating, and the idea of being more than five minutes from a hospital freaks me out.” And yet, when they stepped inside the refurbished lookout tower, “we knew,” he says. “It was our style, and we like repurposing properties.” (The couple is currently turning a 1904 carriage house into their home in D.C.) As for their fears about island living? “Completely gone,” says Hages, thanks to friendly neighbors and frequent ferries to the mainland.

Initially, the tower resembled a rudimentary Colonial, with a central cutout for a door surrounded by four peephole windows. Builder Bill Bunton of Cumberland, who worked on two of the renovations, also recalls the remains of a wooden wraparound porch that had burned in a fire that swept through the island in 1957. “They designed the building to look like a house, so it would be disguised,” says Bunton, who used to play in the abandoned, graffitied edifice as a kid, during the summers he spent on Peaks.

In the 1970s, a private owner turned the tower into a seasonal residence with the basics: electricity, plumbing, a furnace, a shingled roof, and four large windows overlooking the water. “But it was sort of like living in a conversation piece,” says architect Will Winkelman, who worked with the subsequent owners and Bunton to overhaul the home in 2004, when he was with Whitten Architects in Portland. To access the top floor, you had to climb, like the soldiers did, up one of a pair of ladders located on either side of the second story. “And you’ve got this big concrete thing that soaks up water when it rains, so it was always damp inside,” he says.

The only non-peephole windows faced northeast, so the old place was also terribly dark. To brighten it up and increase the square footage, Winkelman put an addition on the back with a two-story open stairwell that resembles a giant greenhouse. Composed of translucent sheets of polycarbonate laid over a framework of pine planks, the enclosure beams southern light through the first and second floors and has become a “room” in its own right. “In the winter I curl up on the landing like a cat because it’s the warmest spot in the house,” says Hages.

To bring more light in through the front of the house, Winkelman designed a glassed-in living room/pantry addition with a dramatic V-shaped roof he dubbed the “batwing entry.” Most of the ceilings in the home are seven feet high, so “the building’s form comes from a desire to open up and out from this cave,” he says. The sloped design also maximizes the daylight filtering in from the east and west. On the western side, where the roof covers part of an expansive deck, Winkelman installed a set of vertical, angled polycarbonate panels spaced a foot and a half apart. The semi-sheer slats provide privacy from a neighbor while allowing porch sitters to feel the evening sun on their faces and glimpse the water sparkling through the trees.

The new wings are clad in 10-inch-wide strips of smooth, gray fiber cement siding, a product Winkelman chose because it looks “un-housey” and distinguishes the additions from the old building, now waterproofed with stucco. “I wanted to show the tower in its true form,” he says. The whitewashed interior, which has been insulated and drywalled, also downplays domesticity. “This was never an island cottage, so a clean, sculpted space felt right,” says Winkelman. “The drywall is folded into many of the openings, without trim, so the walls read like what they are: 12-inch-thick slabs of concrete.”

When there were opportunities to expose the home’s structural underpinnings, the architect and homeowners capitalized on them. Part of an original concrete wall, gritty on one side and smooth on the other, thanks to a fresh cut, is visible in a corner of the pantry addition. And in the second-story den, a wide steel beam bolstered by perpendicular steel rods stretches horizontally across a long wall and reinforces the floor below. “We think those industrial aspects are beautiful, so we were excited to see them uncovered,” says Hages.

The master bedroom, which Boquel and Hages renovated in 2011, pays homage to their love of utilitarian forms. Located at the top of a narrow spiral staircase (an improvement on the old military ladder), the room had only a tiny half-bath when the couple moved in. The winding route to the shower on the second floor was a nuisance, so expanding the bathroom was the first priority. But after bringing in Bunton and Winkelman, by now the proprietor of his own Portland firm, they decided to take the whole design in an edgy direction.

The result, rendered in World War II–era materials, has a communal, barracks-like feel. The bedroom and bathroom occupy a single space, separated by glass panels. “If we had put in a solid wall, the room would have felt really small,” says Hages. A concrete partition divides the shower and toilet into stalls, and a massive concrete double sink, crafted by Jon Meade of Portland, defines the back wall. “We actually asked ourselves throughout the process, ‘what would the military do?’” says Hages. “We think they would keep things simple and functional, and maybe they’d even have a big old slop sink like that.”

For the room’s finishing touches, the homeowners turned to a plumber and a blacksmith. Dave MacWilliams of South Portland created a sculptural undersink shelf and towel-warming rack from lengths of galvanized metal pipe. And Tim Greene of StandFast Works Forge in Parsonsfield topped the nightstands and edge of the bed platform with galvanized steel. Juxtaposed against the warm Baltic birch furnishings, the metal, with its subtle sheen and mica-like flecks, appears almost precious.

“We feel so comfortable here,” says Hages. “It’s our aesthetic, and it has my favorite view in the house,” he says, gesturing toward a pair of slender windows—part of the original sub-watching slot—that form a right angle in the western corner of the room. The scene is postcard-perfect: long fingers of land and a scattering of sailboats atop a wide swath of blue. But if you squint, you can imagine the hulking shapes of armored Allied ships drifting on the horizon.