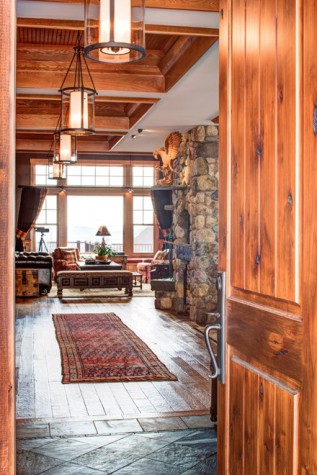 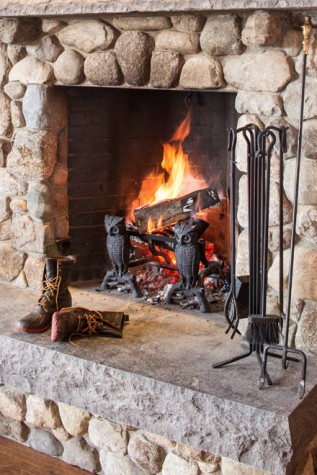 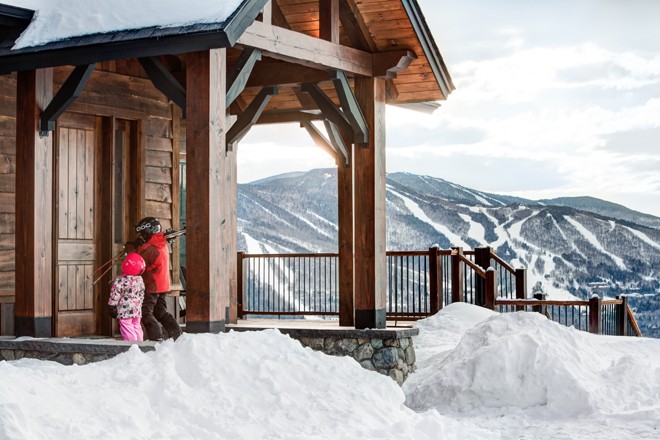 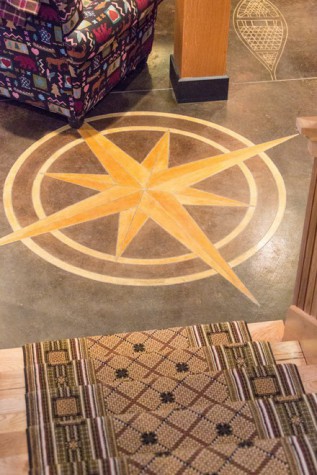 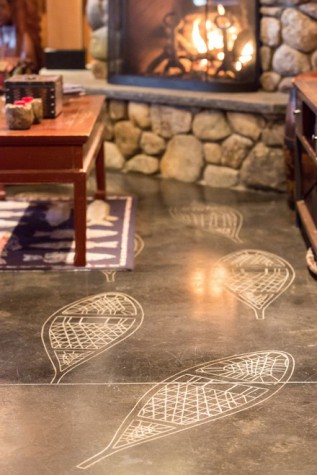 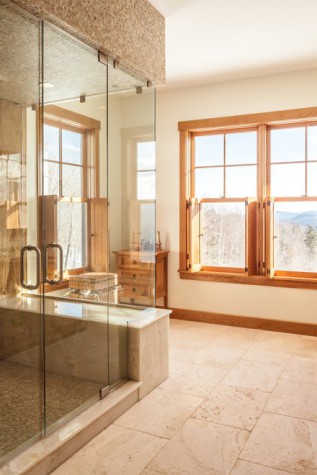 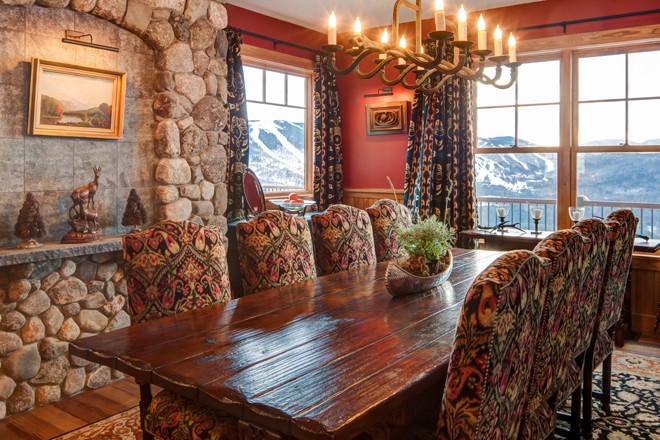 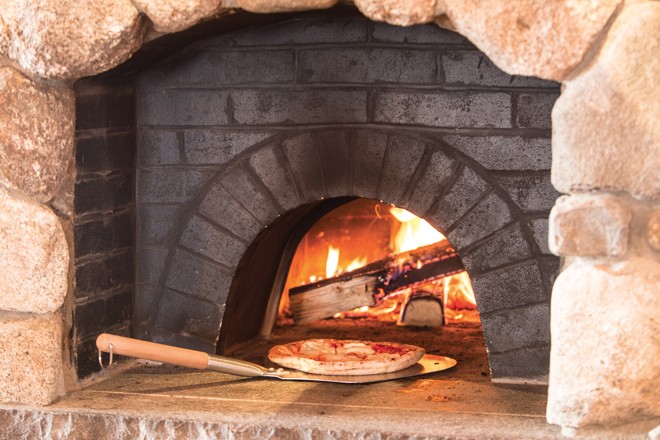 The wood-burning oven is the perfect excuse for a pizza-making party. “We love have 15 people gathered in the kitchen all competing to come up with the best pizza,” says the homeowner. 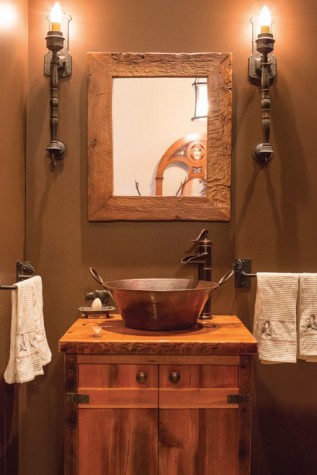 As a self-proclaimed “lighting junkie” Michon fixated on both direct and indirect lighting, spending hours researching lighting fixtures. Every single light both inside and out, including these in a bathroom, is on a dimmer switch. “I like to be able to dim down as the night goes on,” she says. 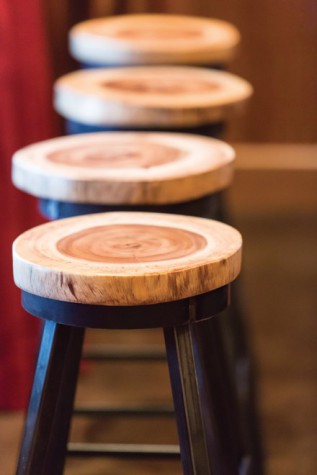 The artisan-made bar stools in the rec room go around the pool table. 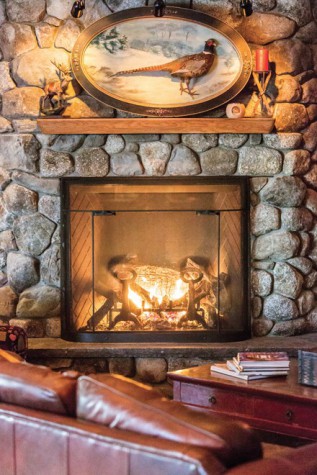 The Schencks love their fireplace and wood-burning oven. “They are beautiful structures,” says Michon. “We wanted a large fieldstone fireplace—we love wood, not gas— and we wanted it to be the centerpiece of the home.” 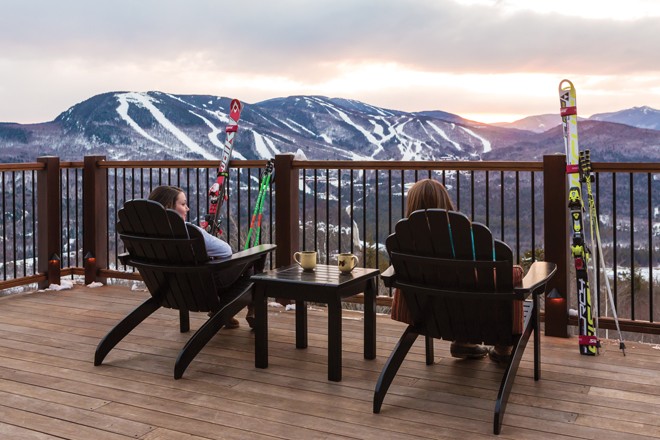 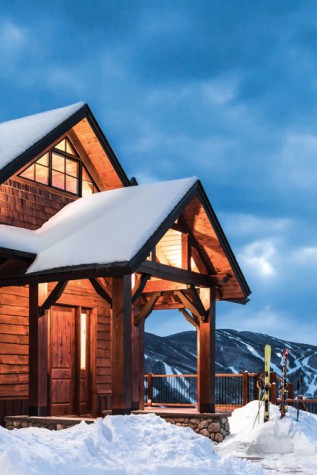 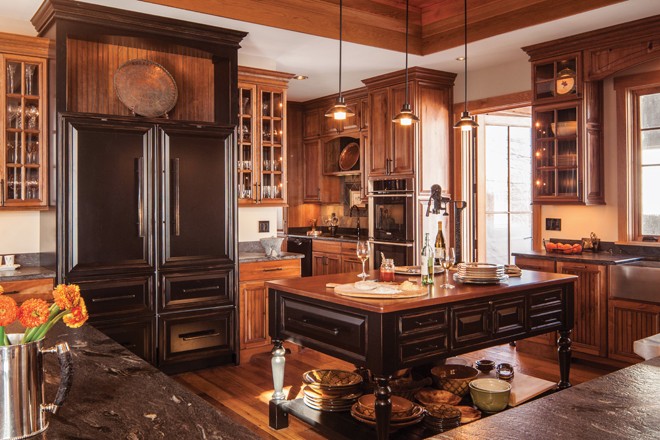 The kitchen was designed not just for cooking but for entertaining as well. The room mirrors the family’s former kitchen, but is larger and includes an island, allowing the cooks to be part of the party even during meal prep. The cabinets are by Cabico and are from Bethel Kitchen Designs. 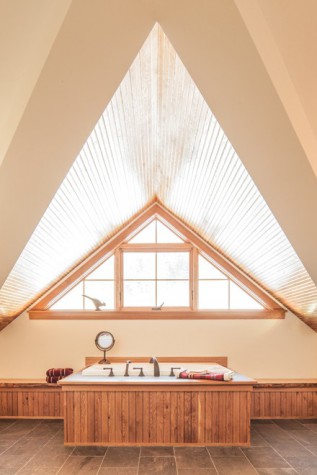 All of the guest suites are named. This ensuite bathroom —named Kineo after Kineo Mountain in Moosehead Lake—features a large soaking tub with dark oiled bronze plumbing fixtures under the eaves of a peaked window. The surround is white oak beadboard along with granite-colored tiles. On either side of the tub, symmetrical benches with a live edge were chosen to fit the space and provide added drama. 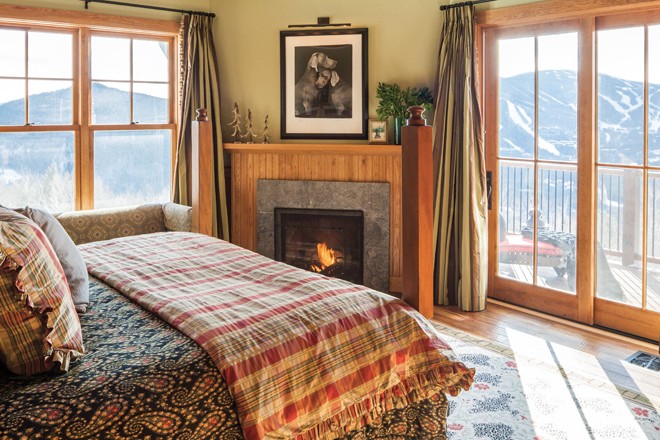 In the view-filled master bedroom, Michon worked hard to achieve just the right blend of warmth and sophistication. The bed is an antique pine low-post remade into a king size by Leonard’s of Seekonk, Massachusetts. The fireplace surround is local granite and white oak beadboard. William Wegman’s Friends hangs over the mantel, a gift to Van from Michon. “I love the combination of pinks, greens, and reds with a heavy dose of black,” says Michon. 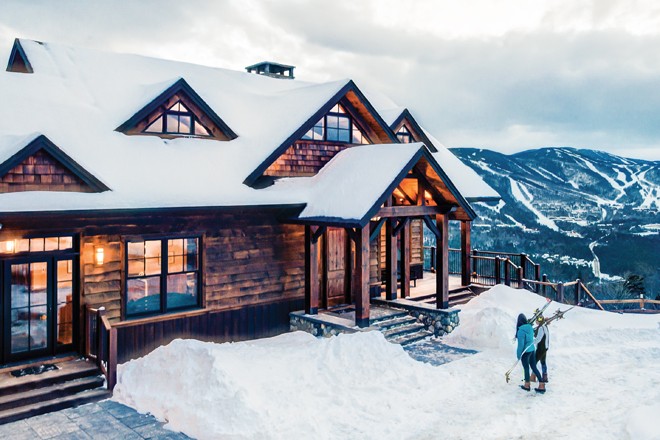 This Sunday River mountain house was built by Bruce Lilly of Bethel-based Clearwater Builders to take advantage of the views, and was influenced by ski resorts out West. The steel-framed house features pine live-edged siding, red cedar hand-cut shingles, and pine board-and-batten siding. 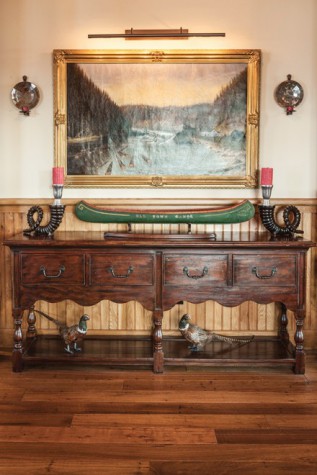 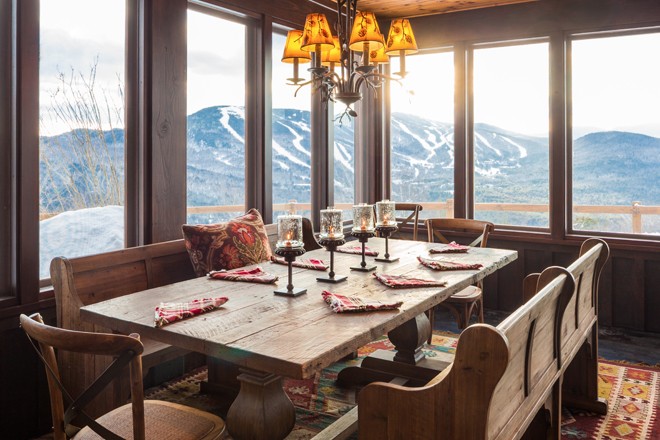 The Schencks use the screened porch year-round—panel inserts go over the screens when the weather gets cool and a woodburning stove heats up the space on cold nights. A rustic trestle table is paired with two church pew-style benches instead of more traditional side chairs. The homeowner was unsure about the chandelier at first (“you can only do so much pinecone decor,” she admits), but decided once the table and benches were in place, it would make the perfect accent.

Meteorologically speaking, 1988 was a bad year. The worst widespread drought in the Midwest since the 1930s Dust Bowl left much of the central U.S. parched, and record-high temperatures reduced the Mississippi River to a relative trickle. The Winter Olympics in Calgary were especially affected as strong winds brought daily temperatures into the 60s, wreaking havoc on the schedule of outdoor events. It was during this year of strange weather that fanatical skiiers Van and Michon Schenck discovered Sunday River. Enticed by rumors of a great Maine mountain and plenty of well-groomed snow, they made their first trip, fell in love with the area, and have been season passholders ever since.

It wasn’t just the promise of snow, though, that brought them here. Van’s family has a long history in Maine. His great-grandfather Garret Schenck founded pulp and paper manufacturer Great Northern Paper Company, which was once the largest landholder in Maine. The Schenck family was based in Millinocket where they built their paper mill. While they haven’t been associated with the company since the 1960s, the family retains ties to the area, including an original fishing camp on Moosehead Lake.

After renting for many years at Sunday River, Van and Michon bought a home just behind South Ridge the year their son was born. It was within walking distance of the mountain, and an ideal place to be with young children. But when their son went off to college nearly two decades later, they realized they no longer needed the proximity to the mountain—instead, they wanted something with a view.

The Schencks began looking—first in Powder Ridge, then at The Peaks—but didn’t see anything that sang to them. In the process, they were introduced to builder Bruce Lilly of Clearwater Builders in Bethel. “He was the first one to suggest that we think about building something from scratch,” recalls Michon. A search for houses turned into a search for sites, and before long they had fallen in love with one in particular: a lot at The Peaks, 12 acres at the top of Mount Will and one of the only lots in the area with a 180-degree view of the southern mountains, a western view of Sunday River, and a northern view of the Mahoosuc Range. There was just one problem: it wasn’t for sale. Luckily, Lilly knew the owner, who had done some minor clearing but no building in the almost two years he had owned the property. The Schencks were able to negotiate a sale quickly, and the lot they had hoped for was theirs.

Having come to the decision over time to build rather than buy, the Schencks had developed a long and detailed list of ideas for their home. As a celebration trip after their son beat cancer his junior year of high school, they had traveled to the Yellowstone Club in Montana. “The houses out there were spectacular,” says Michon. “I was struck by wood—knotty alder, wormy chestnut—rich, textured, and different than the white or red birch we had used in our other house.” The Schencks were also impressed by the use of different siding materials: shingles, barnboard, clapboard, stone. They preferred the live edge instead of the typical straight-edge clapboard. And they loved the use of angles and pitch in rooflines—different from the single or double gable typical of New England architecture. After seeing these homes, they decided on a hybrid style, or, as Michon explains, “a house that looked like it belonged in Maine but with a flair of other great mountain resorts out West and in Europe.”

The siting of the house was the starting point. The Schencks hired Whitten Architects in Portland to do the initial conceptual design, site planning, and exterior forms and materials, and then later, their longtime friend, Massachusetts-based architect John Mitchell Fuller of Mitchell Fuller, to fine-tune some of the interior plans and provide validation on Michon’s finish choices. Perhaps counter to what one would expect, the Schencks wanted their primary view to be south-facing, not of the mountain (that would be the secondary view). Whitten calculated the arc of the sunrise and sunset throughout the year in order to maximize views and allow the family to live with the movement of the sun. The homeowners’ other design requirements were layout based. “While we are a small family—just me, my husband, and our son—we have a large extended family and many friends,” explains Michon. “The house is always packed. I laugh that it sometimes feels like we run a bed-and-breakfast.” An open floor plan was designed with entertaining in mind. The kitchen mirrors the family’s former kitchen, but is larger and includes an island, allowing the cooks to be part of the party even during meal prep. A wood-burning oven allows for pizza- and bread-making during the long cold winter months, and a large fieldstone fireplace is the home’s centerpiece.

Knowing his clients’ penchant for wood, Lilly constructed a steel-framed house with pine live-edged siding, red cedar hand-cut shingles, and pine board-and-batten siding. Lilly and his team of craftsmen masterfully brought the interior details to life, such as wood-coffered ceilings, wainscoting, thick, tall doors, hand-scraped wormy chestnut wood floors, and iron railings and trim that echo the exterior. According to Michon, Lilly was incredibly tolerant of her specific requests, all of which he sourced with outstanding craftsmen: iron workers, finish carpenters, stonemasons, tile setters.

Michon has always had a passion for decorating, and had a vision for her home that she wanted to bring to life. “I’ve tried to stick with what we laughingly dubbed ‘sophisticated lodge’ as a style. I had to have antlers, but not too many—I wanted an updated, slightly modern take on a traditional, almost European mountain home,” she says. When it came to the furnishings, Michon’s inspiration was a hand-carved grandfather clock that sits in the main hall from the Black Forest period in Europe (Black Forest antiques feature incredibly detailed animal and bird carvings). In fact, the one request Lilly told her she would have to source herself was a hand-carved railing with animal carvings to overlook the great room. Michon came across an article about a wood carver in New Hampshire by the name of Bill Schnute. After several conversations, the Schencks commissioned Schnute to create five dual-sided panels of Maine flora and fauna (including, of course, a moose, a bear, and a wolverine—the mascot of Schenck High School). “Set in hand-forged iron, they are truly an amazing piece of artwork that adds a wonderful flare to the house,” says Michon. In an effort to furnish her home with pieces that would blend nicely but still make a statement, Michon had many of the furnishings altered to better fit the home’s aesthetic. For example, an antique English hall table with antlers originally had a white Carrera marble top, which was too formal, so she had the dealer switch the top out for a honed black granite. And two hall tables in the mudroom with basic pine-turned leg pieces needed “some oomph,” so she had the turned legs and skirting painted black, leaving the worn pine of the tabletop alone.

Knowing they would be using the house year-round, the Schencks also sought usable outdoor living spaces. The team created ample deck space with an outdoor fireplace and beautiful landscaping. “One of our favorite things to do all summer long is to sit in our Adirondack chairs, sipping some wine as the sun sets behind the mountains,” says Michon.

As a family, the Schencks often debate which season at Sunday River is the best. Michon can say she’s finally decided. “My favorite season here is whatever one we’re currently in.”

In search of snow, the Schencks have found so much more.