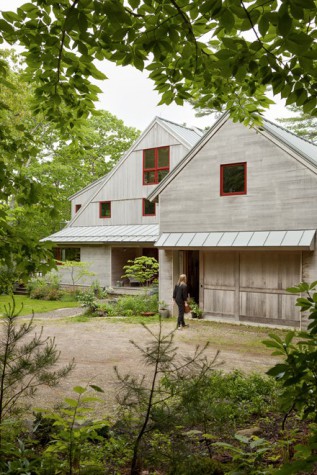 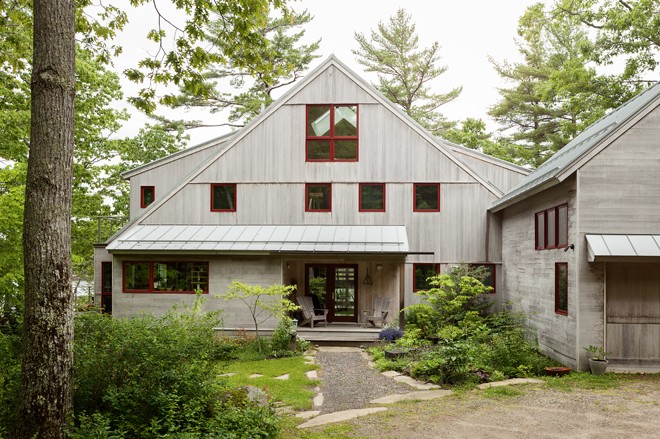 To create a sense of calm on the exterior of the home and barn, architects Steven and Wiebke Theodore chose smooth, tongue-and-groove cedar siding and steel roofing in a matching weathered gray shade. The red window frames “bring out the green in the landscape, making it look greener,” says Steven, referring to a technique famously employed by Frank Lloyd Wright in his Pennsylvania “Fallingwater” home. 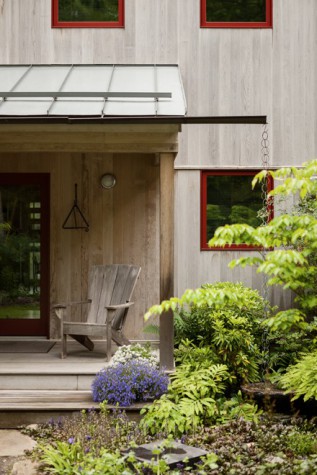 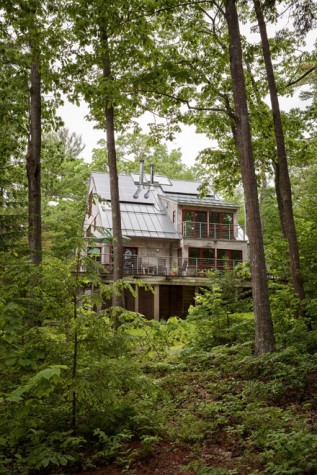 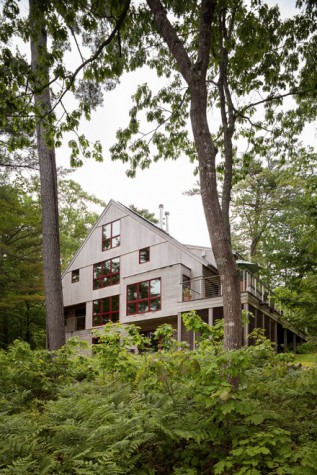 With the roof and a pair of decks largely out of view, the home is well hidden on the western, water side. 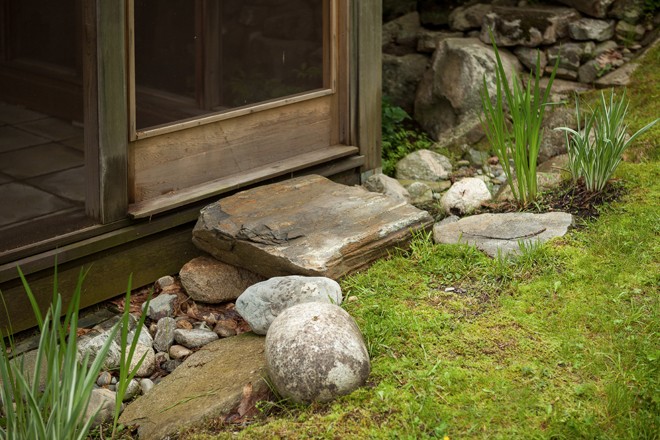 Japanese iris mingles with moss and natural stone near the basement door. “Our goal is to eventually have a completely mossed ‘lawn,’” says the wife, who worked with David Jewell of Landcrafters in Woolwich to harmonize the landscape with the surrounding woodland. 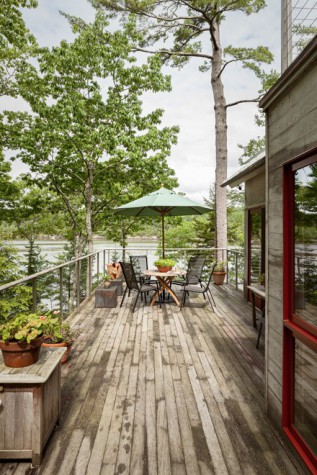 The mahogany floorboards and railing on the south-facing deck have weathered to the precise shade of the lichen on the trees. 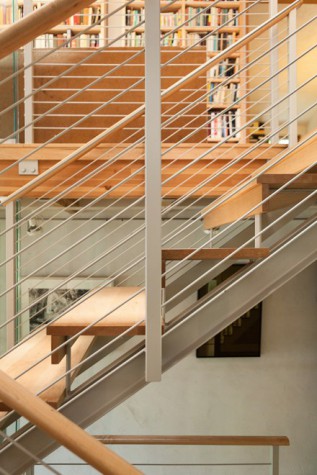 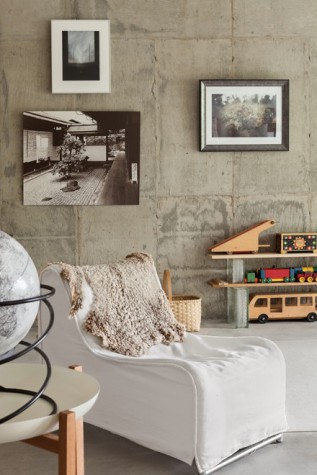 Sculptural wooden toys are displayed near art of a more serious kind: a pair of photographs (the large one at left was taken by the wife) and an acrylic by Maine artist Dozier Bell. 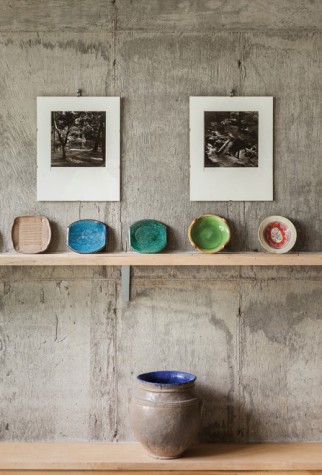 On a concrete basement wall, plates purchased at the “Salad Days” fundraiser at the Watershed Center for the Ceramic Arts in Newcastle are arranged near a pair of photographs taken by the wife and an urn made by the husband’s grandmother. 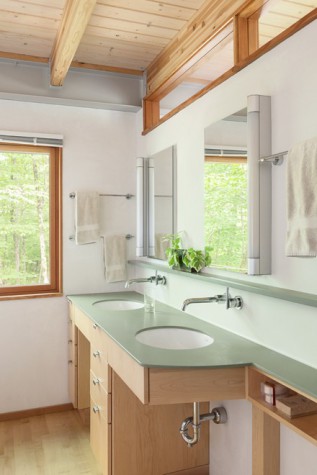 In the master bathroom, the architects specified a 3/4-inch-thick Corian countertop and shelf, instead of the typical 1 1/4-inch variety. “We like the lightness of the material, and the idea of using less of it,” says Wiebke. 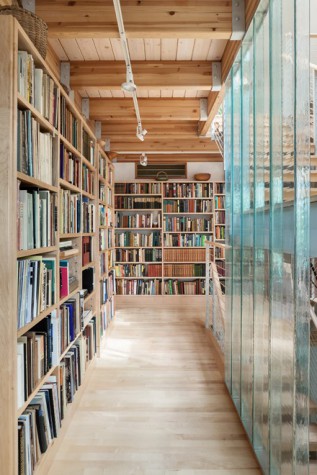 On the third floor, open bookshelves form a “wall” between the hallway and his and hers studios to the left. 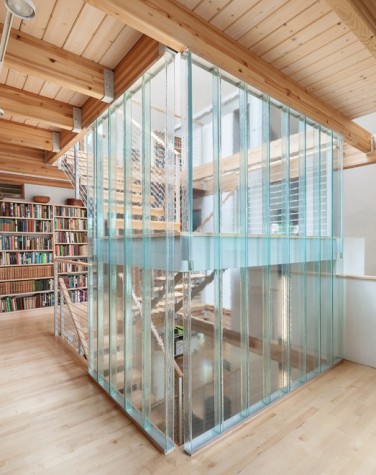 With a skylight directly over head, the channel glass stair tower beams light from the top floor all the way through to the basement. 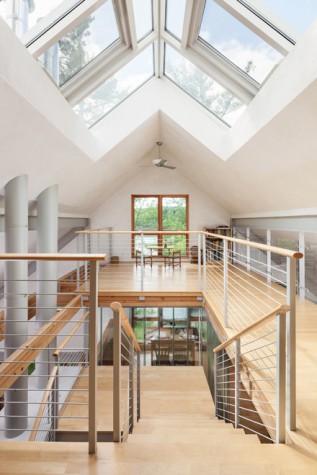 There are virtually no solid walls in the “crow’s nest,” which is subtly circumscribed by cable railing, tempered glass panels, and an enormous window framed in Douglas fir. 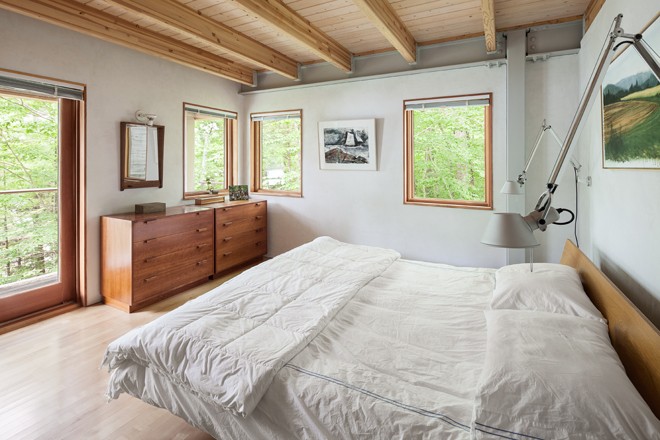 Paintings by renowned Maine artists William Thon and Marguerite Robichaux hang in the master bedroom. The architects eschewed molding and baseboards to cut down on material and give the home a gallery feel. 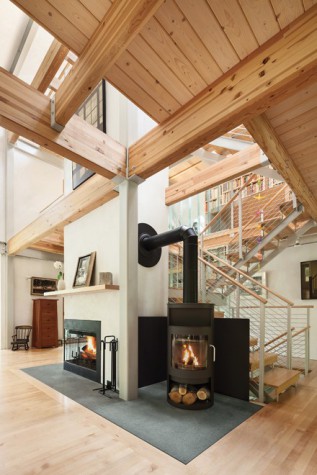 On a central honed granite hearth, a corner fireplace lends ambiance and a Rais woodstove heats the home and provides another place for simmering pots. 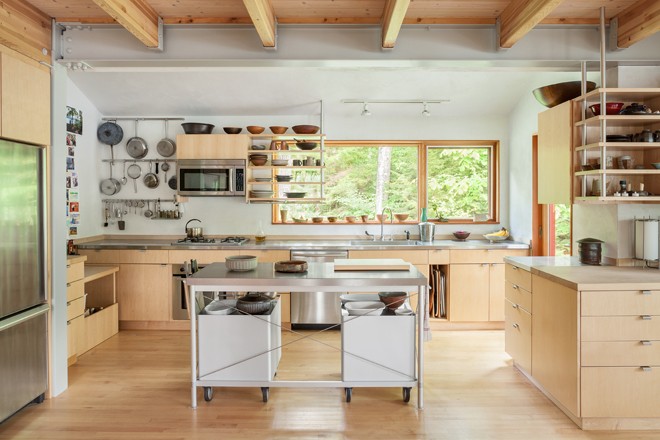 In the kitchen, open and solid cabinet shapes form an abstract composition reminiscent of a Piet Mondrian painting. “We like to mix it up, so you’re not just looking at appliances and cupboard doors,” says Wiebke. Utilitarian cookware is juxtaposed with wooden bowls artist Luke Mann crafted from blighted oaks removed from the property. On a sidewall, cards and photographs are pinned to a giant piece of fabric-covered Homasote wallboard, keeping the refrigerator clutter-free. 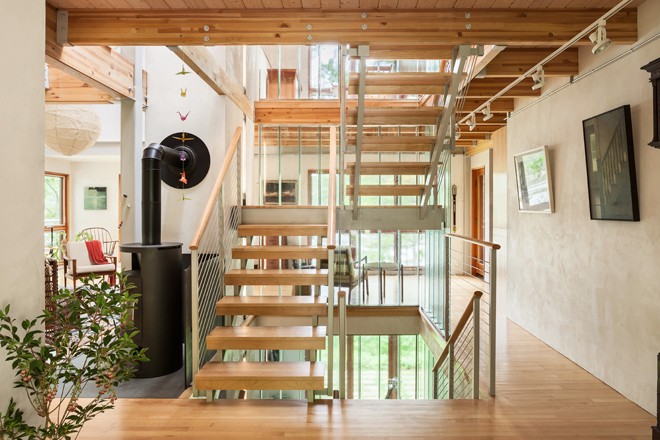 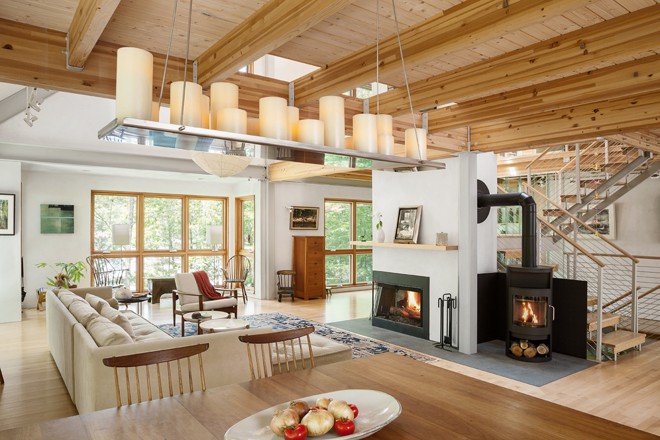 The homeowners worked with metal fabricator Eric Winne to design a steel tray and hanging system for battery-operated candles. Depending on how many leaves are in the table, the fixture can be clipped in different spots along the ceiling.

A high-flying, space-defying home on the midcoast

From the shore, you perceive only a cedar-and-glass peak. A soaring structure appears to float among the pines and oaks, like the most magnificent tree house you’ve ever seen. Massive windows reflect the landscape at every level, starting with the dense undergrowth that partially obscures the ground floor, so you can’t quite tell how the home connects to the earth. On the second and third stories, a pattern of leafy branches layered over water plays out across the panes. And in the top-floor “crow’s nest,” a towering glass grid reverses the image of treetops meeting the sky.

The homeowners have deep roots in this woodsy stretch of the midcoast. The husband’s father grew up in the area and later spent vacations here. “My earliest memory is of being lifted out of a train near my grandmother’s house,” says the husband. “We spent many happy summers there.” As an adult, he continued his dad’s tradition of living away, but always returning to his favorite seaside spot. In the early 80s, he and his wife bought a little cottage (now used as a guesthouse) for their family. Twenty years later, they acquired an adjacent property, where they planned to build a new, larger place.

The lot featured a small, story-and-a-half house with (of all things) a fantastic basement. The previous owner aimed to build a boat there, so the space was unusually lofty, with a 10-foot-tall ceiling. “It was also the first dry basement we’d seen in Maine, so we knew we wanted to keep it,” says the husband. The trickier question was what to do about the rest of the house. “We were struggling because it didn’t work for us, but it wasn’t really suitable for a renovation,” says the wife. “And we don’t wholly approve of teardowns unless you can use the materials in some other way.” Fortunately, they were able to do just that. A young couple expressed an interest in using the components to build their own the home and “we gave them virtually everything, including the appliances,” says the wife.

With the foundation laid bare, husband and wife architects Steven and Wiebke Theodore were free to carry out the homeowners’ vision of an airy, avant-garde retreat. To tie the home to the area’s native architecture, the Theodores designed the front facade in a modern, farmhouse shape. There’s even a garage built in the style of a traditional post-and-beam barn. But when you walk through the door, you enter “another world,” says Steven, where everything appears suspended in space. Looking up from the living room, you see the third and fourth floors hovering on pine platforms beneath the gable ceiling that crowns the home. Maple stair treads drift, one above the other, like a ladder to some celestial place (which, it turns out, is not so far from the truth—more on the top-floor “crow’s nest” later). Above the fireplace, a narrow mantel levitates in a white void. And in the kitchen, dishes float on open shelves cleverly constructed over part of a wide window.

To create an overall sense of buoyancy, the architects and homeowners relied on structural components with exceptional strength. “Our first thought was to do a timber post-and-beam construction, like we did in the barn, but you need a lot of posts and beams,” says the husband, noting that the couple wanted to design a more seamless, environmentally sensitive layout with a minimal amount of material. (Brett Hellstedt of Maine Post and Beam in Yarmouth built the barn with lumber from a stand of blighted oaks on the property.) The couple settled on a steel frame, which is recyclable and facilitates the use of extra-large windows because you don’t need to work around load-bearing walls. The ceilings are composed of glue-laminated beams (strips of wood bonded together) and two-by-six-foot spruce decking—rugged products that allowed builder Eben Greenleaf of Westport Island to space joists and columns several inches further apart than he could have with traditional timber framing. “Once the steel was up, the construction came together pretty quickly,” says Greenleaf, who wasn’t fazed by the unconventional use of materials. “I’d worked with these architects before, so I knew this would be a different thing; it was all really interesting to me.”

Left exposed, the structural forms serve as a major design element. The homeowners had seen a bare steel frame in the famed Maison de Verre in Paris, and steered the architects in that direction. “It was a fun role reversal, with the clients pushing us to create this dramatic space instead of the other way around,” says Steven. Adds Wiebke, “We all agreed there’s tremendous beauty in raw materials, so why cover them?” The majority of the walls are unpainted plaster, which is applied by hand in layers, giving the surface the depth and texture of a canvas. “We wanted a completely neutral backdrop to allow our art to shine,” says the wife, who worked with metal fabricator Eric Winne of Georgetown to devise a wire hanging system for suspending paintings and photographs from the steel beams. In the daylight basement, prints and ceramics are displayed on the original concrete foundation walls. Allowed to function in this capacity, the surface, with its pits and Rorschach-esque markings, takes on an abstract, artful quality.

With a wide-open plan, you have to get creative about defining space. On the main floor, the architects relied on changes in the ceiling plane—floating beams and then a combination of beams and decking installed at different heights—to separate the living, dining, and kitchen areas. To set off the central staircase, they used see-through cable railings and channel glass, a commercial product typically employed as a cladding on buildings. The idea of using glass—inspired by a stairwell in the Maison de Verre—was tricky to pull off. “We wanted a transparent, structurally sound enclosure, but it couldn’t be so clear that you’d bump into it,” says Wiebke. After weighing multiple options, they decided on the channel material, composed of U-shaped, cast glass panels that have a “wonderful, hand-blown effect,” she says. “It’s breathtaking to be in that space, peering out in all directions.”

At the top of the stairs, the ceiling breaks open to reveal clouds and treetops through an eight-by-twelve-foot industrial skylight in the fourth floor “crow’s nest,” named for its lookout quality. The homeowners’ granddaughter and her friends come here to play, as evidenced by a giant cardboard box that has been transformed into a “house.” Separated from the rest of the home, “this is a place where you can leave your fantasy set up for months, without worrying about moving it,” says Wiebke. And with the main living areas visible below, “you can feel connected to everyone, but still be in your own world.”

Gazing at the sky overhead and the water and forest framed in a floor-to-ceiling window, you might imagine yourself in an actual bird’s nest. Or a treehouse. Or gliding through the expanse of blue and green with your very own pair of wings.