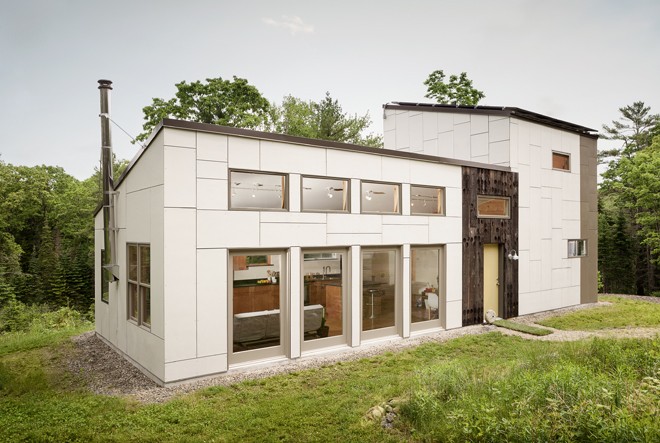 “I believe the whole traditional home has been done,” says Jason Peacock. His interests lay elsewhere when he built a solar, nontoxic home in Wiscasset. His contemporary home consists of two volumes with angled roofs. One roof angles to the back of the house, in order to increase the window coverage (and solar gains) on the south side of the home. The other roof angles to the front of the house, where the rooftop photovoltaic panels face the sun. 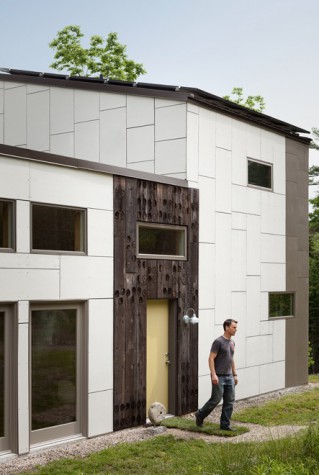 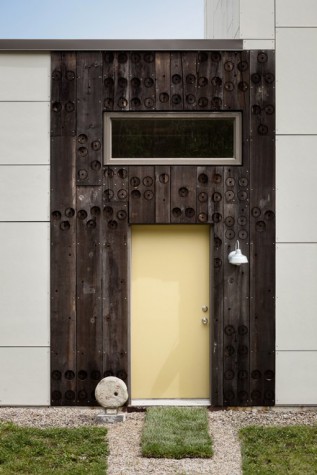 Because the fiber cement boards that clad the home have an industrial appearance, Peacock chose to soften the look with wood at the entry. At Barnstormers of Maine in New Gloucester, he found planks from an old airplane hangar in Sanford. “I like that history,” says Peacock. “I have a pilot license and my brother is a pilot, so I thought that was a fitting match.” 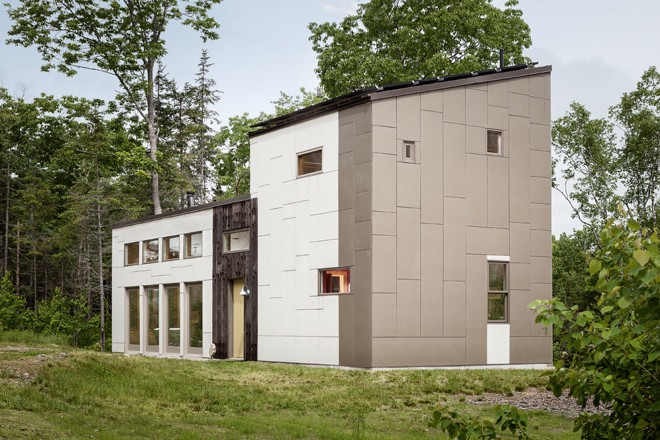 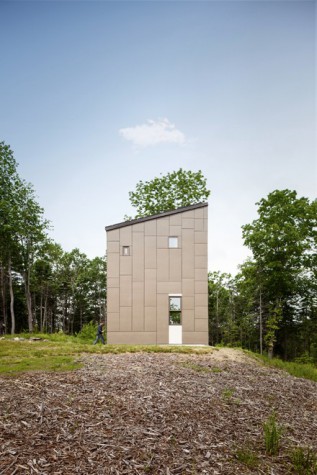 A side view of the house with gray fiber cement panels and a roof that supports photovoltaic panels. The windows in the bathroom and bedrooms are small for the sake of privacy. 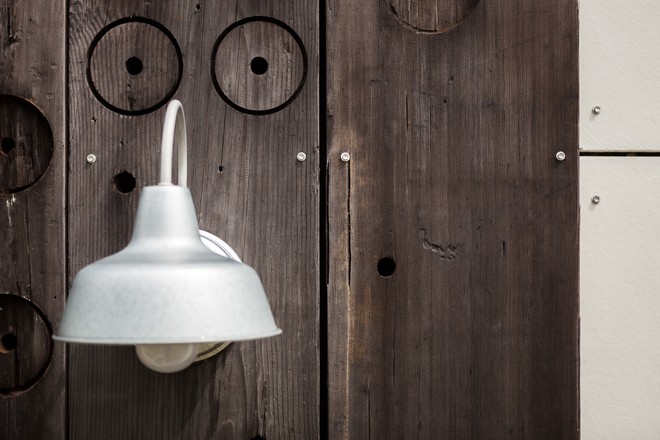 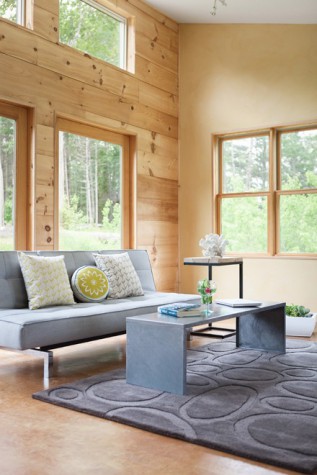 All of the rooms in the house have one wall of shiplap pine and one of American Clay earth plaster. In the living room there is also a concrete floor, an Angela Adams rug, and a sofa from Room and Board, which Peacock found on Craig’s List for $200. Peacock used a mop to slosh around the nontoxic concrete floor stain so that the fingers of the mop would suggest wood grain. 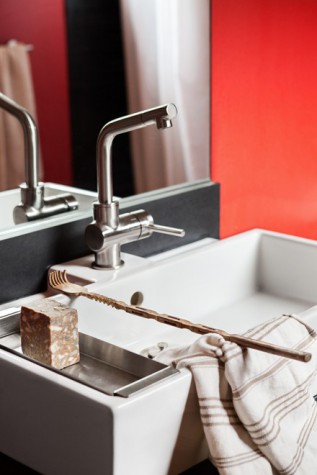 The downstairs bathroom has a sink from Ikea, a PaperStone countertop, and a wall painted with zero-VOC paint from Yolo Colorhouse. 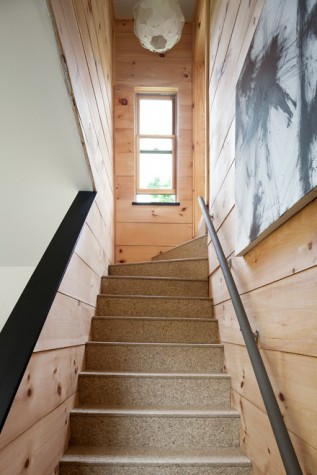 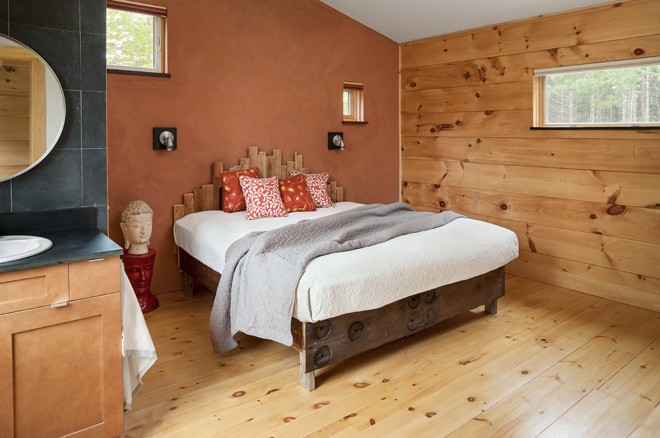 The rust wall of the master bedroom is finished with American Clay earth plaster. “It’s pretty amazing stuff,” Peacock says. “It has negative ions in it, so in theory it helps antioxidize the air. It also helps control humidity, so it is a very active wall finish. It participates in keeping the house healthy.” 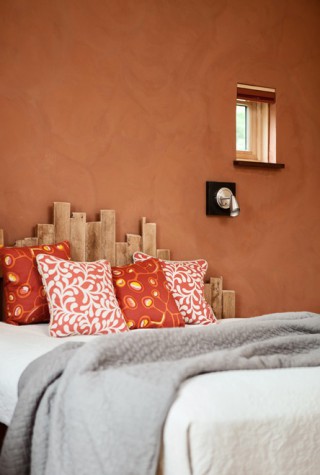 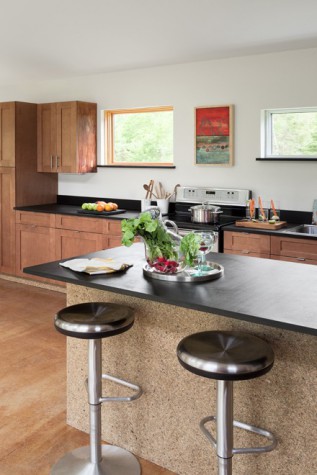 The kitchen features energy-efficient appliances, maple cabinets from Maine Green Building Supply, PaperStone countertops, and sunflower board for the base of the island. All the art in the house (including the painting on the far wall) is by Peacock or one of his friends. Peacock likes the metal stools because they don’t have backs and are adjustable, so he can use them at both his bar and breakfast table. 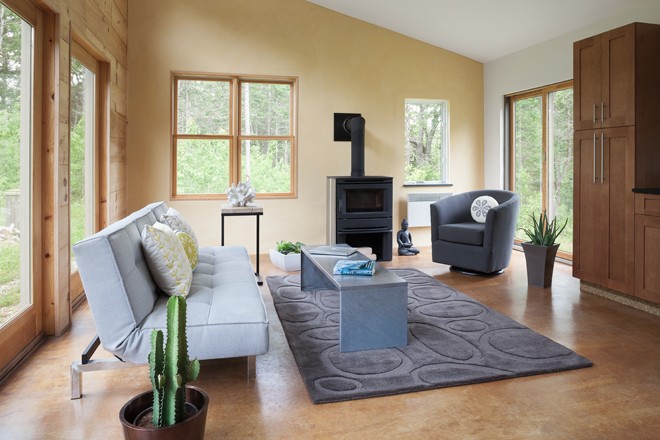 A view of the living room shows the woodstove and a barrel chair from Jan Robinson's EcoHome Studio in Portland.

Sustaining the environment—and the soul—in Wiscasset

At 42, Jason Peacock looks like you might expect an avid surfer who built a solar house almost entirely by himself might look. Handsome, lean, and fit with a day or two of stubble on his face, he is simultaneously laid-back and passionate. When I first pilot my car down the gravel drive to his home, I see a youthful man wearing sunglasses, an old surfing T-shirt, and flip-flops. I’d have put him at 30, if he hadn’t already told me his age. He is pushing children on a rope swing, a dad on his day off. We chat a bit in the drive—hellos from me to his daughter and her  friends—then go inside to meet Peacock’s father, who is puttering in the kitchen, and his mother, who is playing a mandolin. It’s hot, soon to be stickily so, and they are thinking of heading off to Reid State Park, but no one’s moving very quickly. It’s nice to be right here.

Here is the Wiscasset property where Peacock’s solar house stands amid 35 acres of young forest and meandering creeks. Peacock once imagined transforming all this land into a community of four or five solar homes that he would sell or rent, perhaps on a weekly basis to give visitors a taste of green, toxin-free living. That possibility—well documented by news outlets like NBC and MPBN—has been momentarily hobbled by financial reality. It is now more of a hope than a full-fledged plan. Still, it speaks volumes that Peacock is capable of the dream. If you were to time-travel back to 1989 and meet Peacock when he was a senior in high school, you’d have found a young man in a wheelchair, a person who could barely talk. Not someone who could build a house.

For reasons that were never fully clear, Peacock—a formerly healthy young man, bothered only by a chronic sore throat—woke up one day in his late teens and couldn’t get out of bed. Soon enough, he was incapacitated. None of the many doctors he consulted knew what was wrong with him; some insisted Peacock’s problems were psychosomatic.

Peacock found his way to the Hippocrates Health Institute in West Palm Beach, Florida. Within weeks of focusing his diet on raw foods, vegetable juices, and wheatgrass, Peacock reports, he could walk and talk again. Understandably, he developed enough of an interest in holistic health to go to San Francisco State University to get a bachelor’s degree in the subject.

While there, Peacock heard about a longevity study that documented the seven common denominators that determine life span across multiple cultures. Peacock assumed the first item on the list would be diet. But that was number five. Number two was the immediate environment: essentially, healthy air.

“It hit me like a ton of bricks,” Peacock says. The previous owner of Peacock’s childhood home had been a smoker. Peacock’s father had gutted the house, recarpeted, and drywalled. Formaldehyde would have been in the glued particleboard in the furniture throughout the house. Why had Peacock been so sick as a young man? “I think the toxins just built up in my body’s cells,” Peacock says.

The mid-2000s found Peacock back in Florida and working for a production company that built “really toxic houses.” He was “the squeaky wheel” at the workplace. He says he remembers himself saying things like “we need to use nontoxic paint and nontoxic this and that.” His company put him through a LEED accreditation program, and he was transferred to a green consultant position. But he says the company didn’t really listen to his advice. This led to a second crisis in Peacock’s life. “I had an anxiety attack with all the stress of production building,” Peacock says. “I was trying to identify the issues in my life that I wanted to address before I died.” Peacock hit on the idea of a small solar community on a piece of land that he had bought in Wiscasset in 2004. “It didn’t really make sense,” he admits. “I didn’t have a job or know the town. Still, I liquidated my 401(k) and put everything I knew into the house.” He ended up living in a RV on the land—often with his daughter, Avery—for six months while he built the first stage of the house.

The result is both passive solar (with big windows facing south) and active solar (with photovoltaic panels on a roof sloped to receive the sun). There is a kitchen/living room downstairs with a finished concrete floor, as well as a small bedroom and bath. Upstairs there is a master bedroom with locally sourced pine floors. Each room in the house has a wall of shiplap pine and a wall of American Clay earth plaster. Peacock’s additional “green” choices include a woodstove, a recycled aluminum standing-seam metal roof, dual-flush toilets, Dakota Burl sunflower board for both the built-ins and the staircase, PaperStone (for the bathroom counters, kitchen counter, and window sills), LED lightbulbs, exterior cladding of fiber cement board, and (at the entry) Douglas fir reclaimed from a Sanford airplane hangar. The whole of Peacock’s utility room (with Marathon hot-water tank and electric inverter) is in a small closet under the stairs.

As invested as Peacock is in sustainability, he was even more concerned with making his house a healthy one, avoiding (for instance) formaldehyde and volatile organic compounds, the latter of which is a sweeping group of chemicals found in  paint, flooring, furniture, polyurethane, and cabinets. Peacock’s choices included formaldehyde-free cabinets, no-VOC soy-based sealers, and no-VOC paints, oils, and finishes.

Peacock’s total cost: approximately $150,000. Granted, the house is 1,000 square feet, and Peacock did almost all the work himself. Still, the price tag proves that building a healthy and environmentally conscious home can be affordable. Peacock “gets goose bumps,” when he thinks about what he was able to pull off on the property. “We had a party when the house was finished in 2011,” Peacock says. He’d always referred to his project as “the solar house,” but when his daughter made a sign for the day, she wrote, “Souler Party.” Peacock thought, “Wow, that’s perfect!” He’s called it the Souler House ever since.