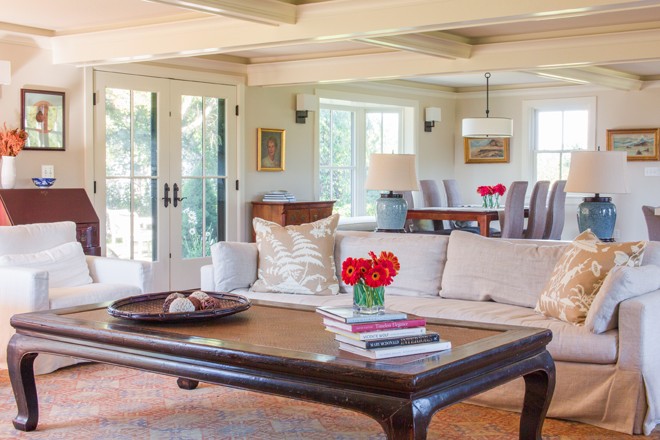 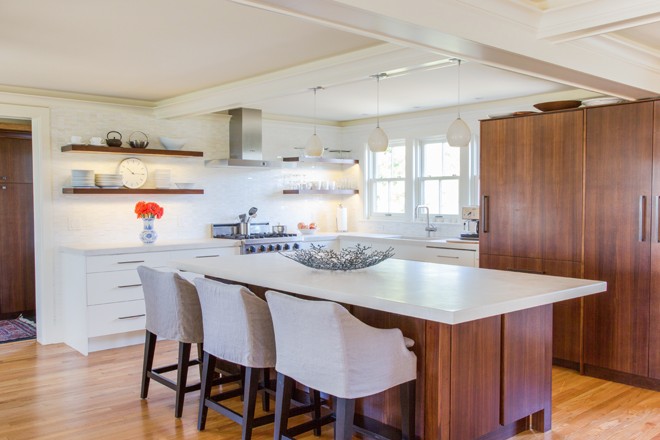 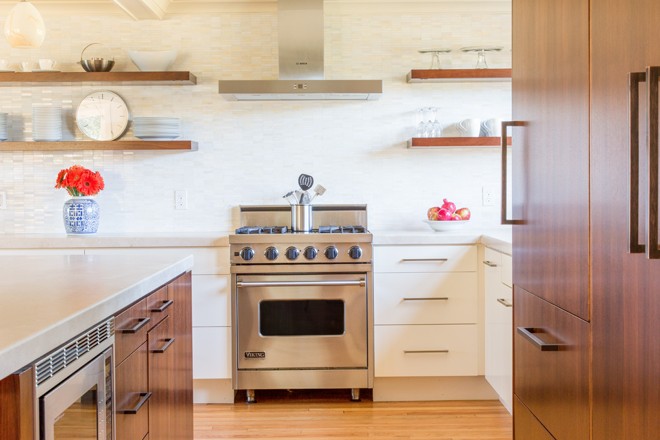 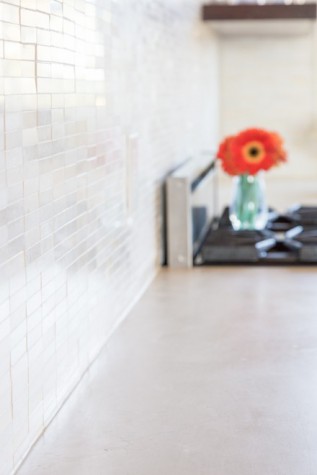 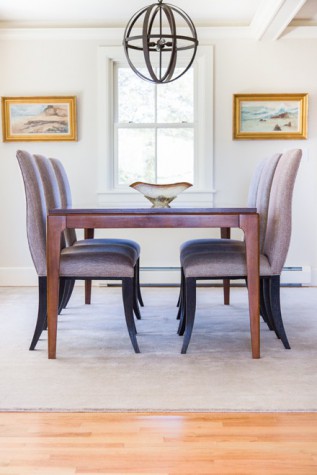 The dining room’s sculptural metal chandelier, from Simply Home in Falmouth, arrived during the photo shoot and was installed on the spot. “Fortunately, I have some electricians on speed dial,” says designer Sarah Steinberg. 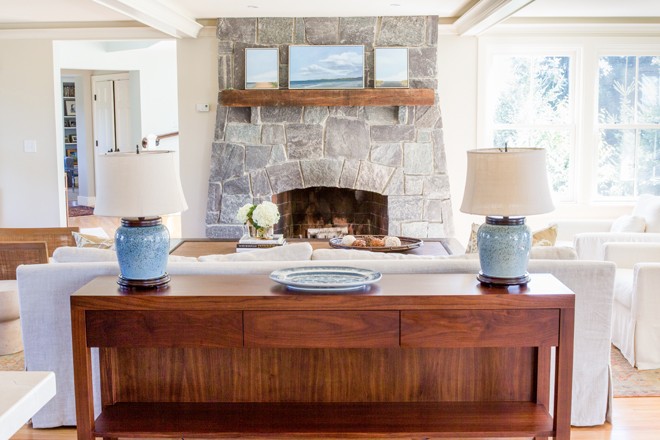 The living area is as serene as the Cynthia Brown seascapes on the slate fireplace, thanks to a neutral palette and unfussy, linen-slipcovered seating; the mantel is part of a beam salvaged from the barn. 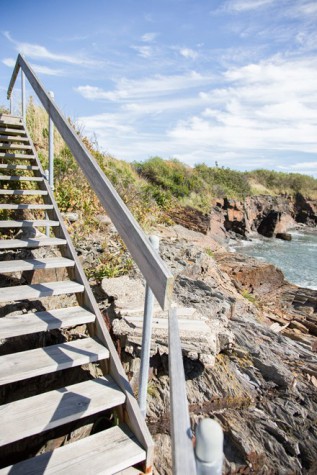 After a storm, the Morris’s have their own “Thunder Hole” at the base of this set of stairs. 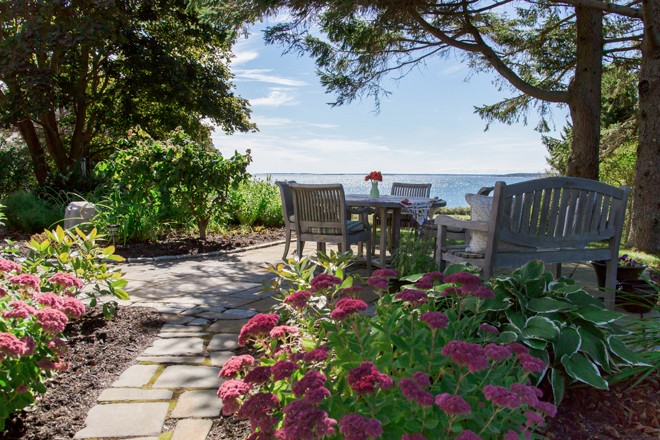 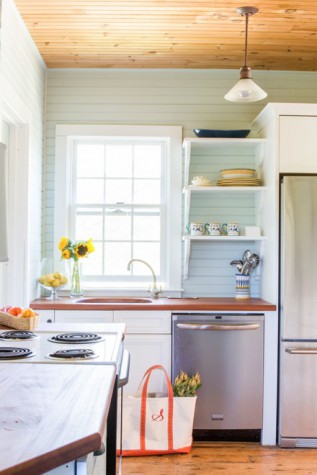 In the barn kitchen, only the mahogany countertops and bracket shelves are new; the cabinets, appliances, and sink were repurposed after renovations in the main house. 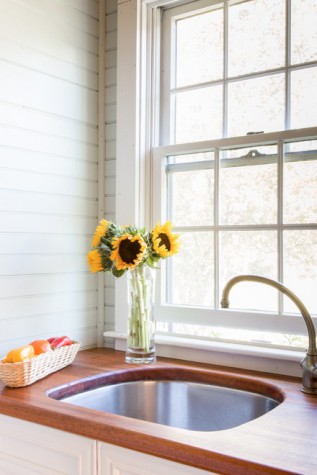 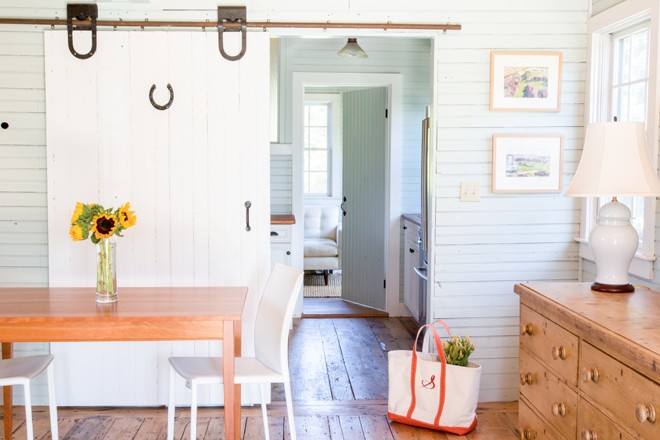 The main floor of the barn features the original stall doors and knotty pine floor. 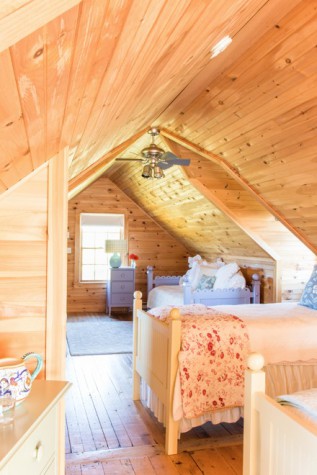 The former hayloft can sleep six guests in a collection of colorful beds from Maine Cottage. 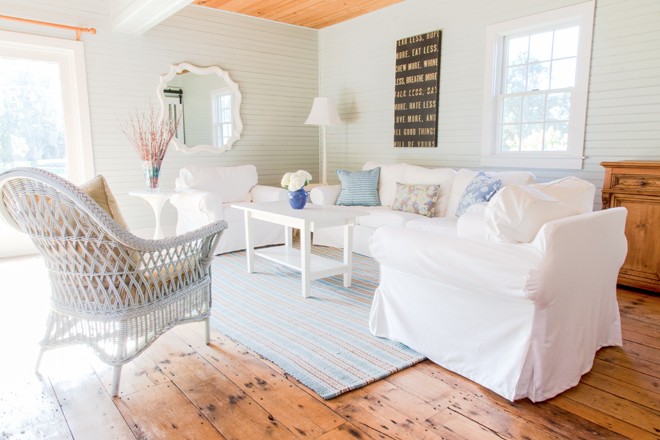 A sitting area in the barn houses a mix of new and salvaged beadboard, painted in Maine Cottage’s Bluebell shade. 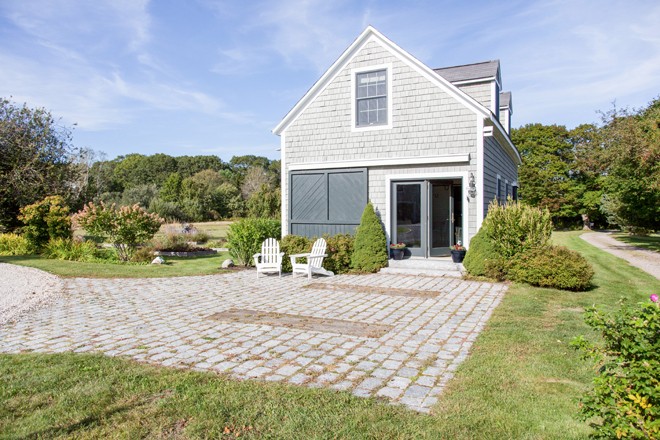 An expansive cobblestone patio by New England Landscapes anchors the barn in an open field. 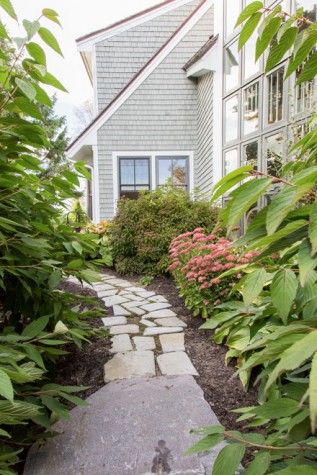 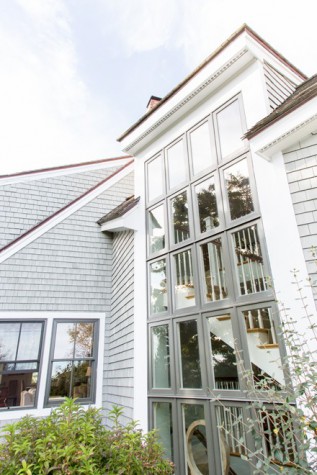 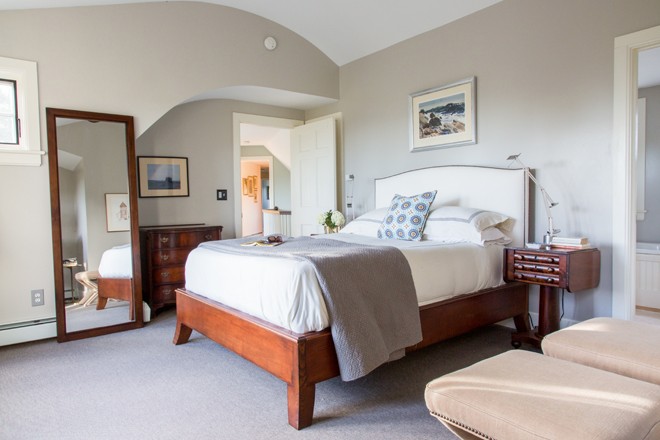 In the master bedroom, a curved wall recalls the waves outside.

It was the real estate equivalent of finding amethyst sea glass along the shore. A property so rare, Ken and Adele Morris had to scoop it up. The plot consists of just under two acres surrounded by the famously family-owned Sprague estate, which encompasses more than 2,000 acres of coastline in Cape Elizabeth and Scarborough. “There are a couple of lots here that the family does not own,” says Ken. “And we were fortunate to find one of them for sale.”

The area’s mystique has as much to do with its topography as its tenants. A narrow road lined with miles of fields and maple trees (and the occasional curious pedestrians) gives way to a giant, grassy bluff where the Morrises’ home sits among a scattering of other houses. In the distance, a pale band of water blends harmoniously with the pastoral scene. But as you move closer to the edge of the cliff, the sea reveals its white crests, even on a calm day. And if you come here after a storm, you can peer down into a rocky inlet and see the surf erupt in a mighty spray reminiscent of Acadia’s Thunder Hole. “I love the wildness,” says Ken, who heads out in his canoe when the waves are up, to go swimming in a nearby cove.

The couple has strong ties to this piece of the coast. Adele lived in Cape Elizabeth until she was nine years old. After her family moved to Massachusetts, she returned to her grandparents’ place on Two Lights Road every summer. “I have wonderful memories of picking blueberries, the beach, and the fog that I’ve always carried with me,” she says. She and her two siblings eventually inherited the grandparents’ home, but the arrangement proved thorny and they sold the property in the late 1980s—a decision Adele regarded with some regret. In 1999, when she and Ken were searching for a summer home of their own, “I actually knocked on the door of the old place and asked the owners if they were interested in selling,” says Ken. “They were not, but we felt better knowing we had tried.”

Then the couple discovered the parcel tucked into the Cape Elizabeth end of the Sprague estate. “Seeing the variety in the landscape here, and how it’s so secluded—we knew we had something unique,” says Ken. They were also enamored of the property’s hundred-year-old former horse barn, which they planned to turn into additional living space and an office for Ken, who owns a retail consulting business. As for the main house, a simple, 1960s-era Cape: “It was serviceable, and we could see a lot of potential,” says Adele.

Over the next 13 years, the couple thoroughly remade the home and barn, more than doubled their livable square footage, and installed three kitchens between the two buildings. The first kitchen redo happened right away. “The original house had only a rusty two-burner stove and very little storage space,” says Adele, who spearheaded the renovation from Florida, where the couple was living at the time. The new version was functional, “but nothing like it is now,” she says, referring to the latest iteration, created with designer Sarah Steinberg of Cumberland. (More on kitchens two and three later.)

The most sweeping changes came in 2004. Anticipating a future move to Maine, the couple hired architect Stephen Blatt of Portland to expand the home and create a style more to their liking. Blatt thought the small, rectangular Cape with a trio of gabled dormers across the front felt unmoored on the wide-open bluff. So he conceived a new entryway and a three-story garage/den/master-bedroom wing in a curved shape that elongates the left side of the house and helps it “hold onto the land.” Working with builder Joe Lucey of North Yarmouth, Blatt also scaled down the windows and replaced the triangular dormers with flat, shed dormers that emphasize the horizontal lines of the home. “A Cape’s magic is in the smallness of its windows, which feel proportional,” says Blatt. An open porch accentuates the concave silhouette, creating a welcoming feeling, “like the house is putting its arms around you,” says Blatt.

Low lying, gray shingled, and ensconced in heavy shrubbery, the home is designed to fade into fog and fields. But surprises await inside. When you enter, you see the glass grid of the French doors repeated, on a massive scale, in a stair tower Blatt dreamed up to connect the three floors. (Statements are the exception to his small-windows rule.) “We wanted to celebrate the view, but also have this wow moment right when you walk in,” says Blatt. The drama, and the geometric motif, continues in the open living/dining/kitchen area, where designer Steinberg carried out Adele’s vision of a coffered ceiling during the final phase of renovations last year. A pair of existing structural beams inspired the design. Working with builder Kevin Rideout of Rideout and Turner in Gray, Steinberg covered the support beams in ivory-painted wood and added crisscrossing decorative beams. Rope lighting hidden inside creates a gorgeous, glowing patchwork and the illusion of more height.

Long, floating shelves mounted on either side of the stove underscore the ceiling pattern and feel less kitchen-y than traditional wall cabinets. “Because the space is so open, our primary goal was to make the kitchen blend with its surroundings,” says Steinberg, who collaborated with Adele to come up with a scheme of chocolate brown and creamy white that is carried through in the living and dining areas. Furniture-like pieces take the emphasis off the appliances: the refrigerator is hidden inside a walnut pantry unit that could pass for an armoire, while the microwave is tucked into a large island that conjures a modern, marble-topped buffet.

Rather than dispose of the cabinets and appliances from the old kitchen, Steinberg suggested moving them to the barn, which the couple had previously restored to its rustic glory. Builder Lucey put in a concrete foundation, insulation, and dormers to let in light. On the ground floor, he carved out a living area, office, and bathroom; the former hayloft is now guest sleeping quarters. Along the way, the couple salvaged as much original material as possible. (When you step inside, you can still smell the hay.) The old stall doors serve as room dividers, and the pine subfloor was left exposed after Lucey pulled up the top layer of rotting floorboards. “Before the 1960s, subfloors were actual boards, as opposed to plywood, and they often have wonderful character,” he says.

A proper kitchen completed the space, which previously had only a vanity sink and a few freestanding appliances. To create a country feel, Steinberg designed white bracket shelving and painted the cabinets from the old kitchen to match. It was Rideout’s job to finesse the units into place inside a narrow, L-shaped room in the barn. “We had to tweak the cabinets to make them fit,” he says. “But that was cheaper than doing custom cabinetry, and we were able to create a custom look.”

More than a decade after purchasing the house, the couple made it their permanent residence. “Finally,” says Adele, “there’s nothing left to do here.” Like a shimmery treasure that washes up on the shore, the home also required many years (and passed through many hands) before it emerged, exquisitely polished.