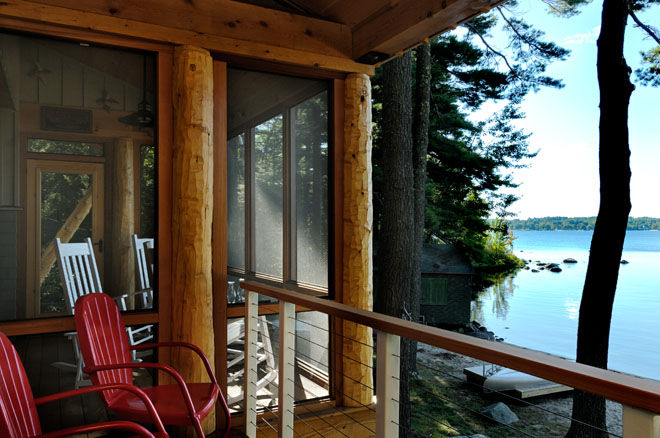 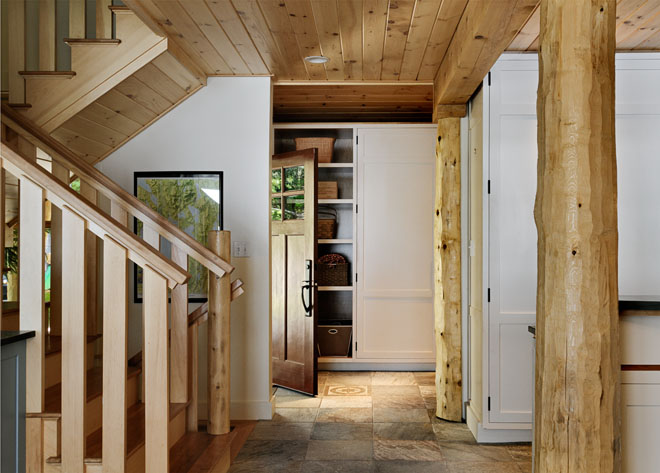 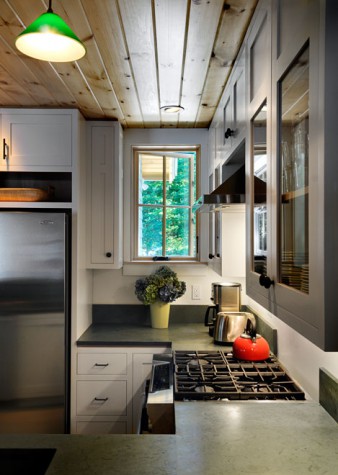 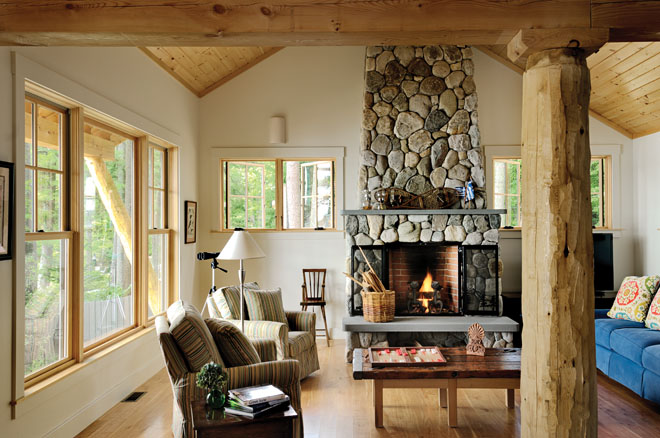 In the family room, Alvin Ridlon of Ridlon’s Masonry in South Casco created a beach stone fireplace similar to one he helped install in the original camp. 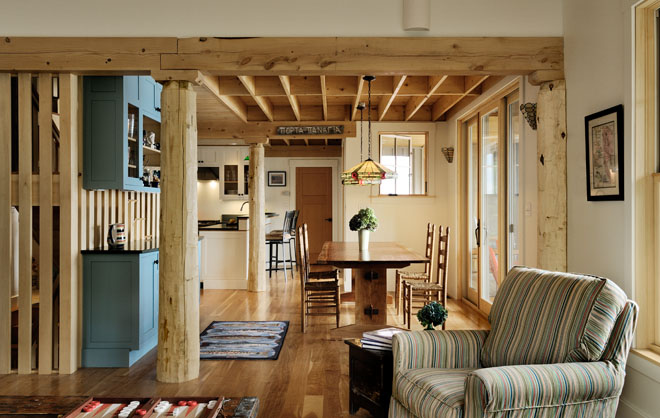 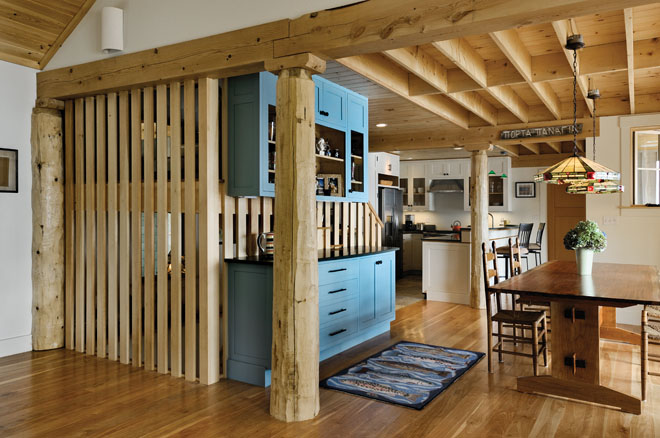 Inside, the post-and-beam construction and varying ceiling treatments help define the different “rooms” in the open plan. Vertical pine slats create an airy feel around the staircase while anchoring built-in cabinetry. 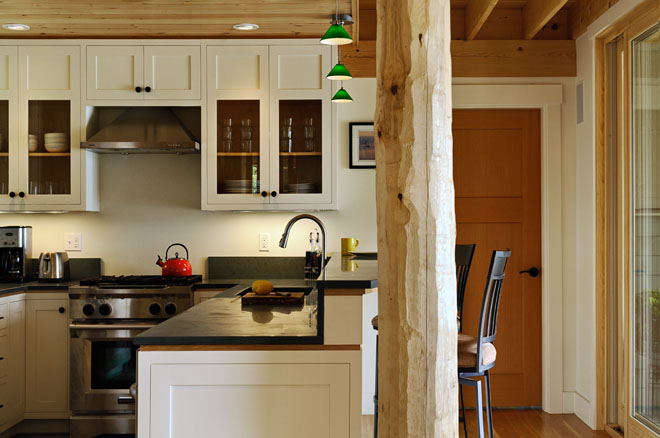 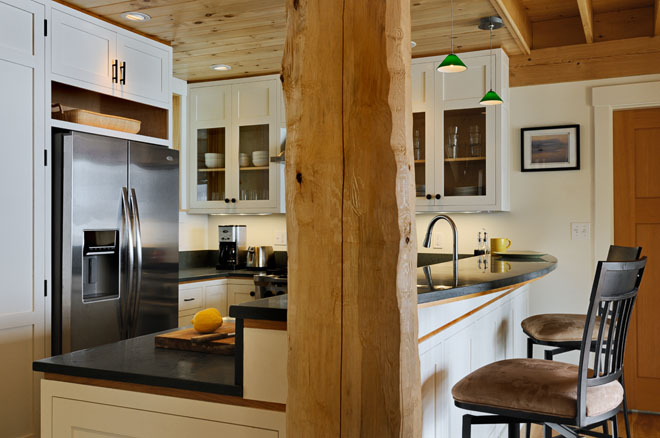 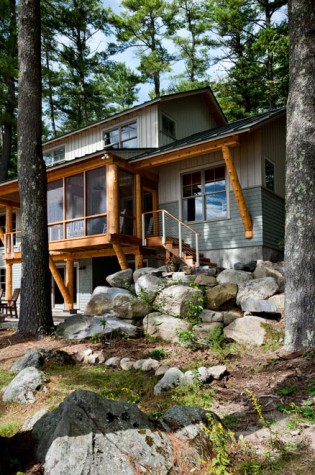 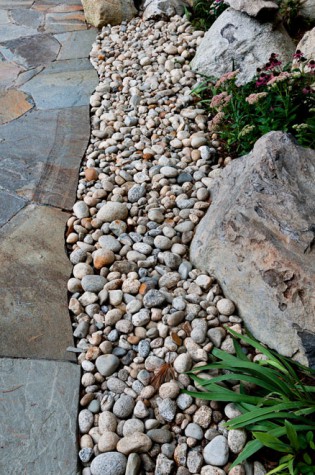 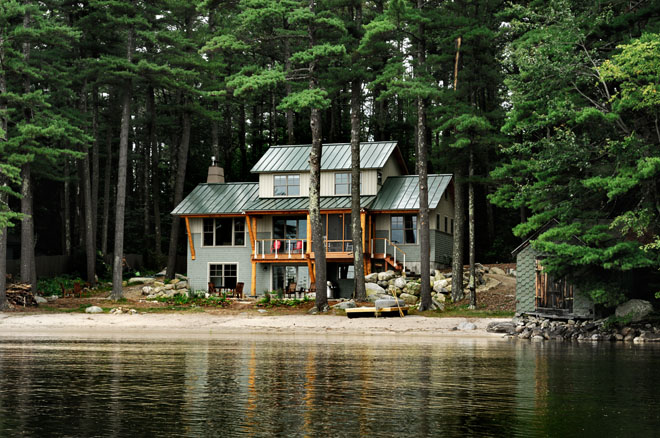 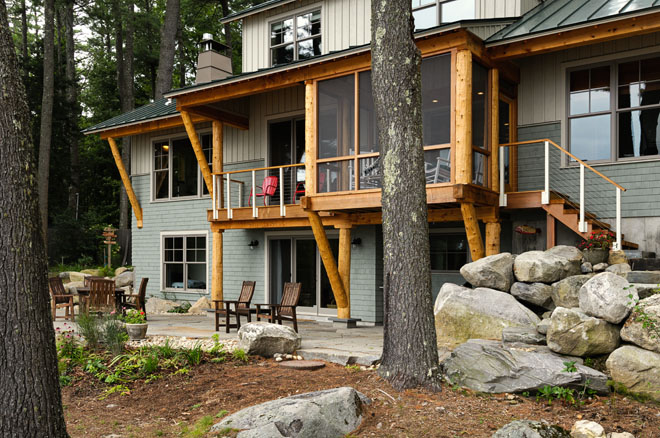 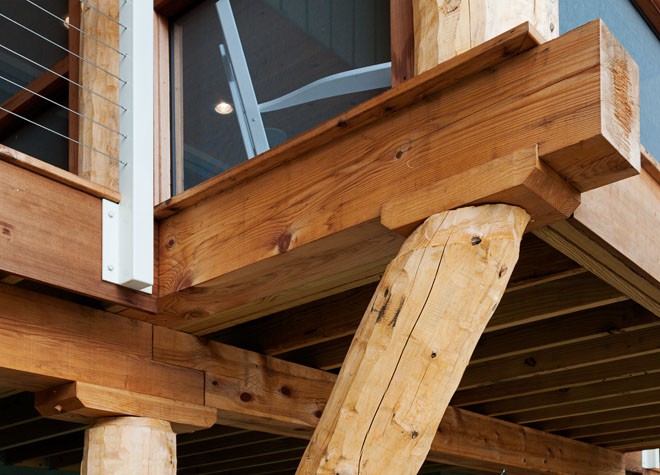 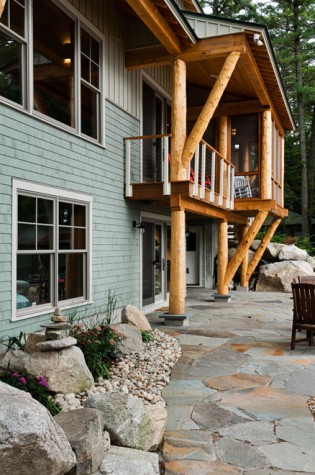 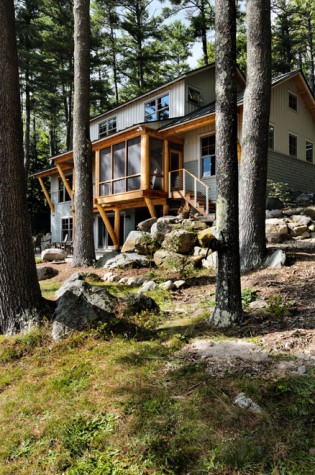 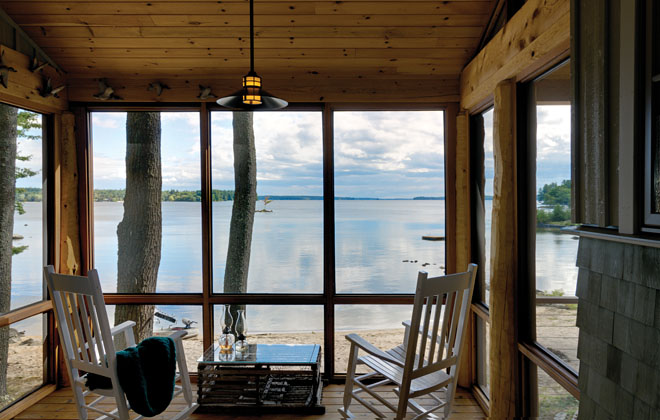 Rough-hewn cedar posts from Maine Cedar Specialty Products in Ludlow provide the framework for a screened porch. The porch frames a view of Jordan Bay, with Squaw and Frye islands in the distance. 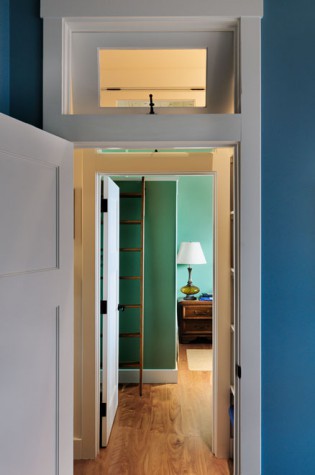 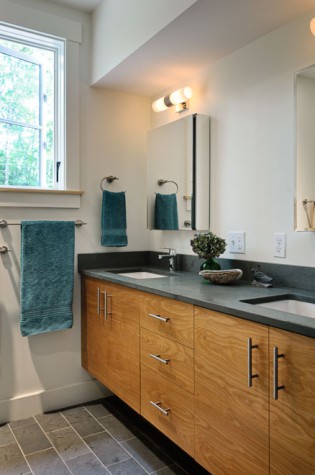 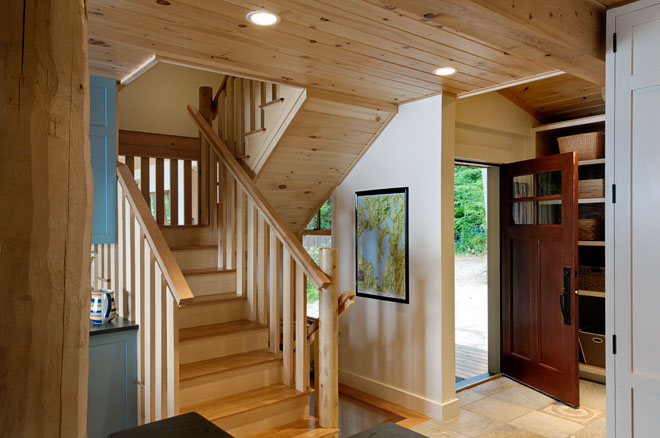 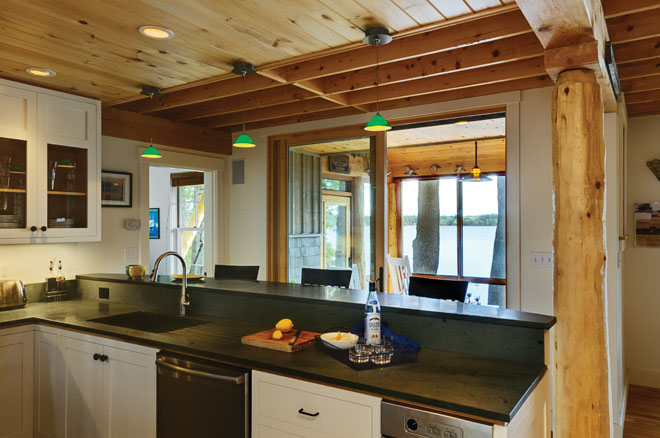 Beneath the slate on the kitchen bar, there’s a little martini glass sketched on the plywood. “One of the workers drew it during construction,” says homeowner Dia. “He knew exactly how we’d be using this spot!”

A family builds anew on a precious Sebago Lake plot.

One sits on the shores of Sebago Lake, the other on a riverbank at the base of the Pindus Mountains in western Greece. But for Charlie, who moved stateside as a kid, his vacation home in Raymond and his native home of Pyli always evoked the same expression: porta panagia. “Gateway to heaven.” Looking out across the lake, the reflection of the clouds and surrounding pines forming an abstract painting on its still surface, “he would always talk about the beauty of this place,” says Charlie’s son, Basil. With his wife, Dia, Basil now owns the camp named after his father’s favorite Greek phrase.

The family has been coming to this spot since 1951, when Charlie and his wife, Flo, bought the house on the adjacent lot. They lived in Massachusetts and saw people escaping to Cape Cod in the summer, but Charlie visited Sebago Lake one winter and fell in love with it. “My parents were sort of iconoclastic; they always wanted to do the opposite of what others were doing,” says Basil. In 1968 the family moved next door to the home on the current lot, which had a larger beach and an unobstructed view. Growing up, Basil spent entire summers at the camp and came up to ski, skate, and ice-fish during the winter. Later, he brought his own family there. “This location is extremely meaningful to our kids,” says Dia.

The structure itself was another story. “Basil’s parents had kept adding things, cheaply, and the house was falling apart,” says Dia. “The systems were failing, we had mold, and everything was really dated.” The home also wasn’t large enough to accommodate the growing family, now four adult children, two spouses, and two grandchildren, all of whom regularly make the trip from Massachusetts. In 2011 Basil and Dia decided to level the old place and “start fresh with a setting everyone would feel comfortable in.”

The process of finding a team for the project unfolded like a series of first dates. The couple sent potential architects an email introducing themselves and outlining their hopes for their new home, with a family photo attached. Then they spent several months interviewing prospects. The ideal candidate had to be able to expand on their vision and work with their budget, and there had to be “a connection.” “It was the same thing when we were choosing a builder,” says Dia. “To us, this was about: ‘Do we really like this person? Can we trust him? And are all the personalities going to get along?'”

Ultimately, they settled on Rob Whitten and Eric Laszlo of Whitten Architects in Portland and Michael Meyer of Island Cove Building and Development in Windham. From the start, the group forged an extraordinarily close working relationship. “We wanted to be involved, on a daily basis, in the decision-making process,” says Basil, who traveled with Dia to the site as often as possible. In between visits, Meyer sent the couple photos and videos of the construction as it progressed. Whitten and Laszlo also made a point of seeking out feedback from Meyer and his crew before the architectural plans were finalized. “It was an amazing experience, and unique, to be able to weigh in along the way and help inch the project along,” says Meyer.

The design begins with a long, relatively narrow floor plan to take full advantage of the water views. The south-facing lake side is dominated by windows and glass doors stacked double or triple wide. “A strategy we like to employ is to bring you from the dark toward the light,” says Whitten. “So here, you enter from the north, through the trees along the driveway, and the view unfolds as you move toward these walls of glass.” The bathrooms and utility spaces are concentrated along the back side of the house, which is dotted with smaller windows, and the living areas and bedrooms are arranged in front for maximum exposure to scenery and sun.

One of the biggest challenges the architects faced was squeezing enough storage and sleeping capacity into the setup. Due to zoning regulations, the home couldn’t exceed 2,900 square feet, so it needed to be “as efficient as a ship,” says Dia. To save space, the homeowners opted for a galley kitchen and smallish bedrooms, and Whitten and Laszlo organized the three floors around a central staircase. They also kept corridors out of the design. “Everything had to do more than one thing,” says Whitten. “So the areas you walk through are also sitting, dining, or storage spots.” Many rooms feature floor-to-ceiling shelving or cabinetry, and in the upstairs bedrooms the closets extend out from the walls, enabling them to be topped with bunks. “My wife is a little obsessed with how many grandchildren there may be, so we’re planning for the future,” says Basil.

The open-plan design of the main floor, coupled with the massive windows and glass doors, helps the home feel more spacious. “Walling everything off would have felt very claustrophobic,” says Laszlo. To set off the staircase, the architects used vertical pine slats and placed windows above the landings, creating the effect of “sunlight trickling through a tree’s canopy.” Varying the ceiling styles and heights—pine boards in the kitchen and entry, exposed framing above the dining area, and a cathedral ceiling in the living room—also creates a sense of volume, he says. Even the finished basement feels airy thanks to eight-foot-tall ceilings and plenty of natural light.

The list of materials used throughout the home reads like a field guide to native trees: pine ceilings, red birch flooring, white cedar posts, hemlock beams. Outside, the posts and beams are repeated, creating a seamless transition between the interior and exterior spaces and the landscape. The ruddy shade of the timbers blends with the pine needles blanketing the grounds. And the siding—a mixture of beige board-and-batten and gray-green shingles—echoes the sandy shore and lichen on the trees. “It was important to us to maintain a camplike feel and to avoid intruding on the beauty of the setting,” says Basil.

To define the front of the property, Isaac Labbe, of Isaac N. Labbe Masonry in Standish, designed an expansive bluestone patio anchored at either end with freeform rock pilings excavated from the site when the concrete foundation was installed. One grizzly-bear-sized boulder, dubbed “the mother rock,” had been inside the original camp’s dirt basement. “It was too big for the fellow who dug the old foundation to move, so he just worked around it,” says Basil. Knowing the boulder had special significance to the family, Labbe gave it a prominent place at the base of a set of stone steps leading to the home’s screened porch. “Everyone put so much time and personal attention into all the little details—it really became a hugfest by the end,” says Dia.

Basil’s parents gave the project their blessing, and his mother survived to see the finished camp. As for his dad, “I feel he’s still here,” says Basil—in the gentle waves that knead the beach, the tree-covered peninsulas that skirt the shore, and the shimmery stretch of bay that leads to the outer reaches of Sebago Lake. Or to some celestial place.