Bones of Steel, Walls of Glass 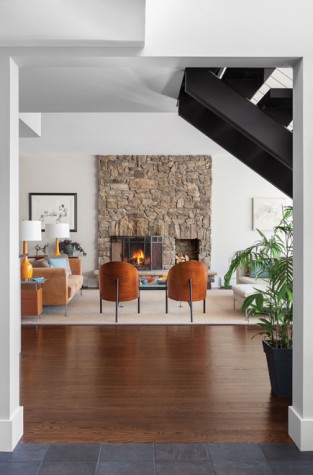 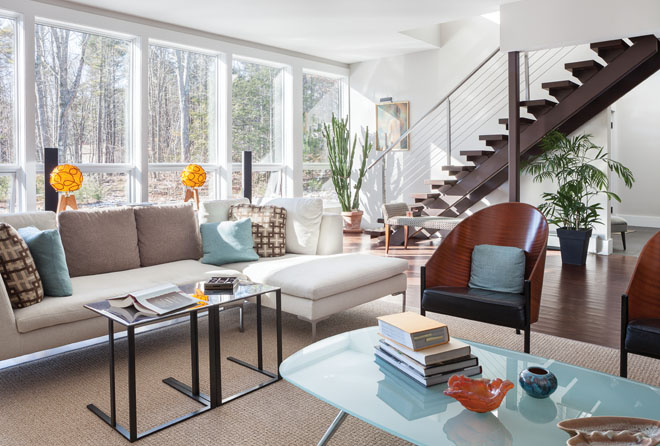 With a love for midcentury modern design, homeowner Peter Dominski hunted down period-appropriate pieces to fill his home from a variety of Route 1 antiques shops up and down the coast of Maine. His artwork collection includes work by current Maine artists, as well as an etching by Charles Woodbury. 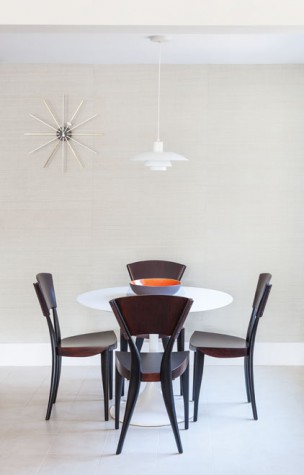 The dining nook features an Eero Saarinen-inspired tulip table, a George Nelson Asterisk Clock, and chairs that Dominski bought in the early 1980s and had refurbished by local designer and craftsman Craig Thomas White. 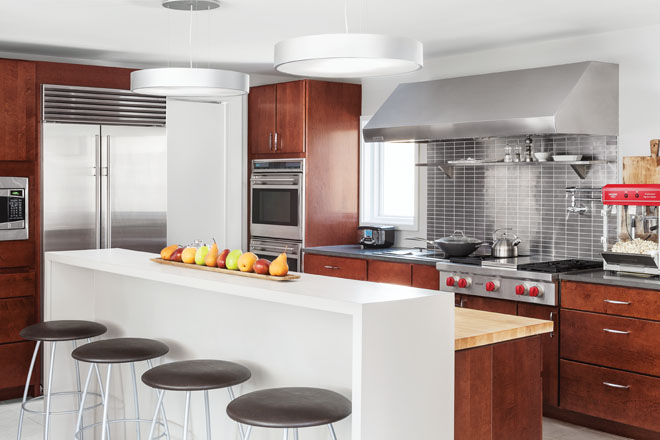 The chef's kitchen includes a wood-burning beehive oven and a popcorn maker. 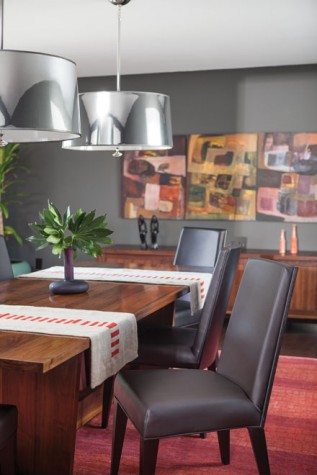 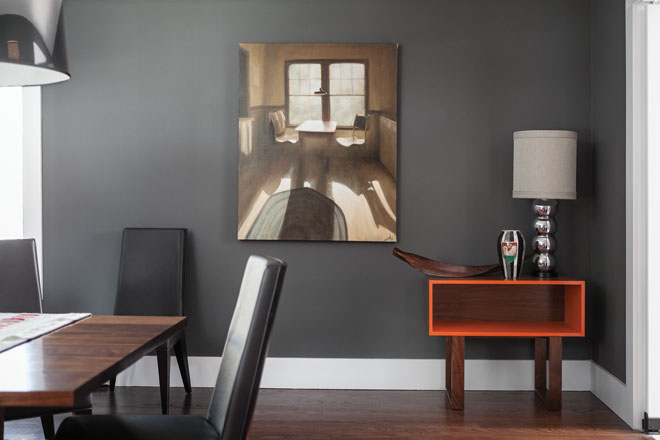 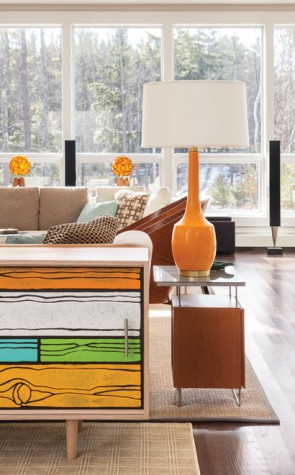 This colorful painted cabinet was handcrafted by Craig Thomas White. Susan O’Neill at Dream Merchants created the palette and interior design for the home. The ceramic orange table lamps are by Mitchell Gold and Bob Williams, and the globe lamps in the background are authentic early-1960s lamps that Dominski had rewired. 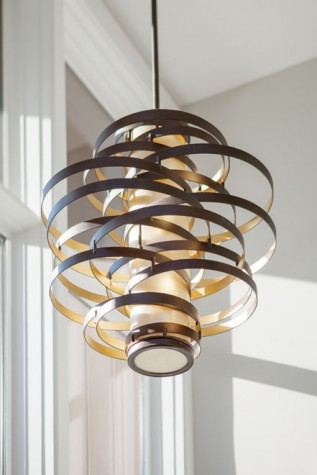 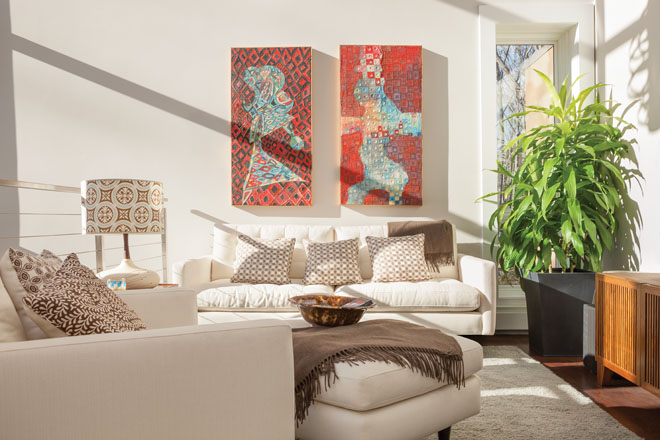 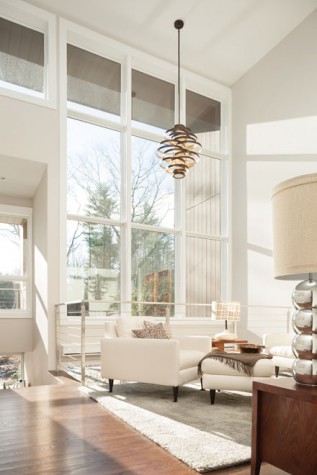 At the top of the stairs, a sitting area takes advantage of the afternoon sunlight through the massive wall of custom-designed Pella windows. 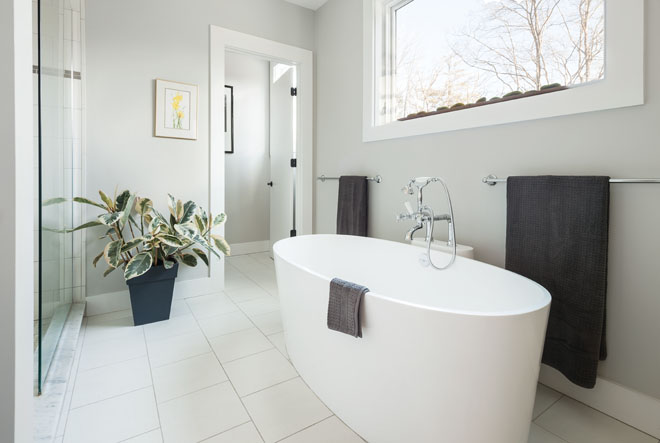 The master bath features a contemporary tub and tiling and cabinetry by Coastal General Construction. 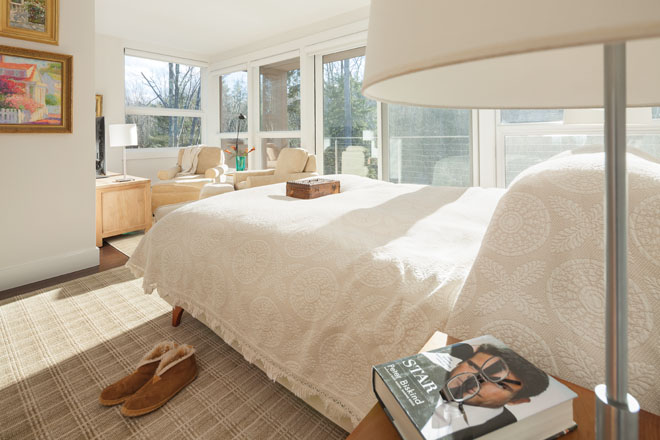 Nancy Swenson of Cape Neddick Interiors did much of the custom upholstery throughout the house, including in the master bedroom. The woven bedspreads in each of the bedrooms were made at Maine Heritage Weavers in Lewiston. “They are what I grew up with,” Dominski says. 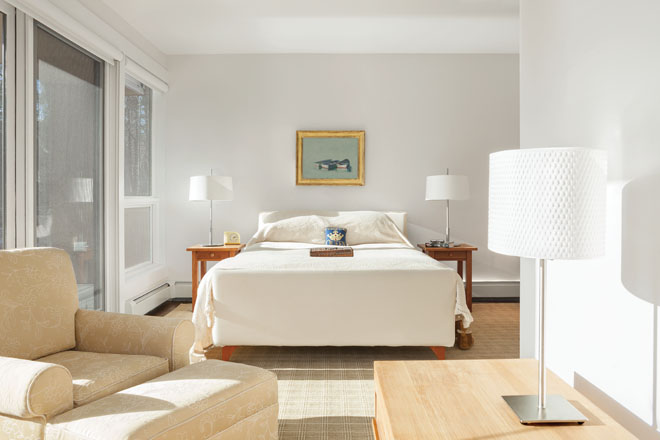 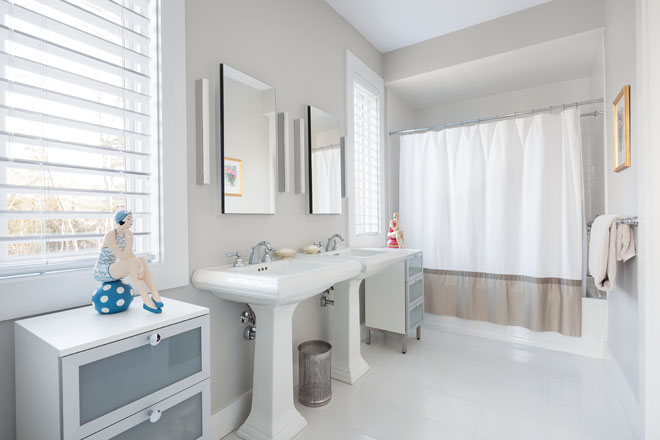 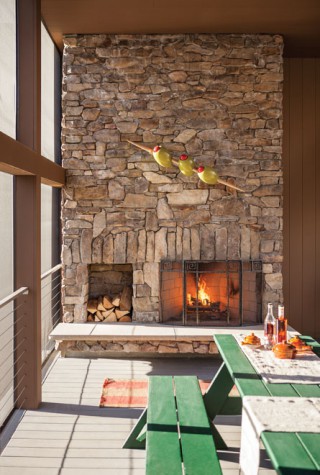 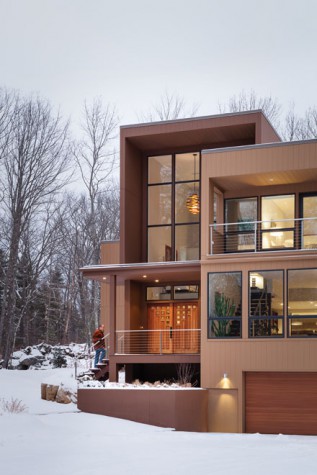 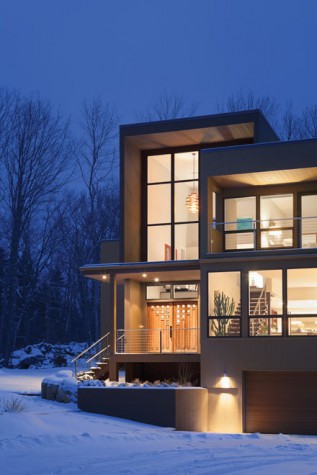 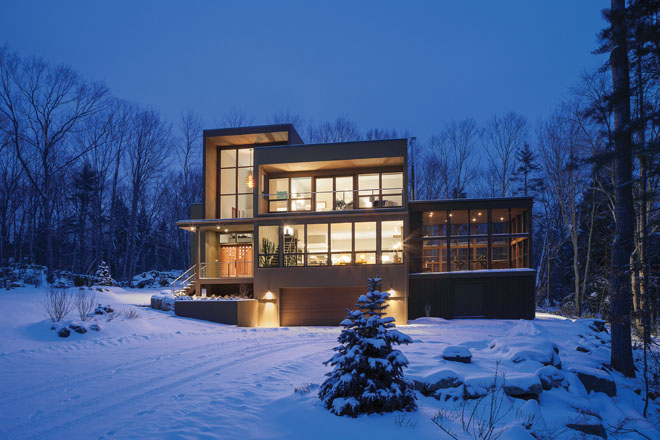 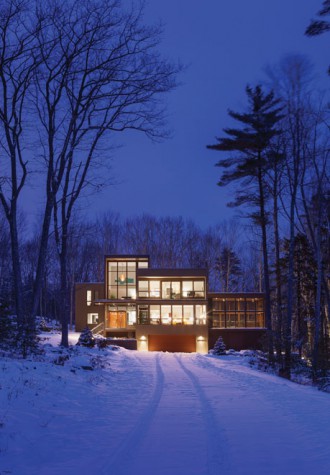 On the approach, the house’s forms appear to float above the landscape like interlocking blocks of space. Modern interiors are visible from a distance through large walls of glass. Eldredge Lumber, just down the road, supplied the framing lumber, interior and exterior doors, exterior siding, and interior casing.

A midcentury modern house in Cape Neddick grown out of nostalgia.

Day begins in Peter Dominski’s household with coffee on the screened porch amid the sounds of birds and rustling tree leaves. Depending on the number of guests he’s entertaining on that particular morning, breakfast might follow in the cozy nook off the kitchen or in the more spacious dining room painted a deep gray. After a day at the beach (it’s only about a mile and a half away), guests assemble at the handsomely stocked bar for drinks while Peter does his thing in the kitchen. Maybe he’s making a homemade pizza in the beehive wood-burning oven or preparing a classic lobster bake. Either way, he’s the consummate host. The comfort of his guests is his number one goal, and in a house like this, it is always achieved.

Dominski’s house may feel like a vacation home, but it’s his primary residence, designed to also be comfortable when his friends leave and it’s just him commuting between Cape Neddick and Boston, where he works in commercial real estate. Dominski’s love for Maine goes way back—back to the days when his Boy Scout troop climbed Mount Katahdin and canoed Moosehead Lake and the Allagash. In his teenage years, he camped with high school friends all over southern Maine and continued to visit when he was in college, skiing at Sugarloaf on school breaks. When he relocated from his native state of Connecticut to Boston in the 1980s for a job, Maine remained his vacation destination of choice. These adventures with friends are more than just sentimental stories Dominski tells; they were his motivation for building a home here—a place where some of those same friends could gather, where boyhood nostalgia could grow up and enjoy a martini.

In 2006 Dominski began to make his long-held dream a reality when he purchased property in Cape Neddick. The six-acre wooded lot set back from the road and situated close to the ocean was ideal for Dominski; the original house, however, was not. Its narrow A-frame structure (18 feet at its widest) would not be able to handle the kind of entertaining he had in mind. The second “floor”—really just a slim catwalk leading to a tiny loft space—would not be big or private enough for guests. Knowing he had a big project ahead of him, Dominski brought in Norm Clough and Jerry DeHart of Coastal General Construction in Ogunquit to serve as the general contractors. Their first order of business: donate as much of the original structure as possible to Habitat for Humanity.

While Dominski’s functional vision for his new house was to have a venue fit for entertaining—whether a dinner party for 20 or several couples as weekend guests—aesthetically, he sought a space that spoke to his love for midcentury modern design. Having grown up in Connecticut in the 1970s, where the style was prevalent, Dominski developed a passion for midcentury furniture and lighting, which only grew as he read more design books. His style was a perfect fit for Boston architect David McMahon of McMahon Architects, who had studied modernists such as Walter Gropius, Marcel Breuer, and Richard Neutra. “Peter wanted a house whose design was inspired by that period yet was timeless,” says McMahon. “A modern style that sits in the landscape, not overpowering but clearly able to stand out in the wilds of the Maine woods.” The challenge would be to design a modern house that is comfortable, warm, and “not too austere.” The design team—which also included Daniel Parker of Haverhill, Massachusetts, whose structural background was key for producing all of the construction documents—created a plan that centered on clean lines, open rooms, and expansive windows custom made by Pella. “I really appreciate how they bring the outside in,” says Dominski.

The inside is intentionally brought outside as well. “Peter wanted a house that would excite his guests even before they arrived,” says McMahon. So, on the approach, the house’s forms were designed to float above the landscape like interlocking blocks of space, and the modern interiors are revealed from a distance through large walls of glass.

The large spaces that were required for entertaining also needed to feel comfortable for one or two people living their daily lives. “The scale and proportions of the rooms achieve that goal,” says McMahon. “One of the best solutions we came up with was to lift the main living spaces to the second floor.” From the bottom up, the ground floor contains all the various support functions of the house: the garage, mudroom, wine storage, bike parking, and an open-air shower and changing area. The dining room and second-floor bedrooms form a wing to the left, while off to the right a screened porch provides balance. And the main living level and master bedroom with private balcony share the middle section with the soaring, three-story entryway foyer and media loft.

Building a house of this nature—with massive walls of windows and open-plan rooms—required the extensive use of structural steel, which was fabricated by Maling’s Welding Service in Kennebunk. “These bones of steel are how the exterior walls can have so many windows and maintain stiffness,” says Clough. Square columns start in the basement and go up to the roof, with W girders running horizontally between them to provide support for the floor joists, which are of engineered wood. Clough and his crew helped the fabricators and crane operator erect the columns and girders in a couple of days. Maling’s then spent another few days welding together the steel components. “The most difficult part of the construction for us,” says Clough, “was screwing and bolting wood to all sides of the steel to allow for conventional wood-framed walls, floors, and ceilings to go between the steel inner structure.”

Another challenging aspect from the builders’ perspective was the continuous wall that runs along the foyer. Beginning in the basement, the wall is a single expanse—19 feet high and 12 inches thick—that utilizes spruce framing and engineered studs on the outside. “We wanted a smooth stairwell without interruption,” explains Clough, “so that when you’re going down to the basement it doesn’t feel like you’re going down to the basement.” It’s a subtle touch that makes a big impact.

With two out-of-state architectural designers coordinating with local contractors, artisans, and craftspeople, things easily could have gotten a little muddled. In fact, according to Dominski, the opposite happened. “There was a real mutual respect for each others’ contributions,” he says. “In my own professional experience in real estate, it’s rare to see architects and contractors collaborating so seamlessly. The designers and builders were all really invested in making their respective individual contributions come together.”

While managing the project, Coastal General Construction was also intimately involved in some of the finer details as well. As a full-service operation, their team included craftspeople working on tiling and cabinetry. Keeping some of these finer elements of the construction in-house meant that Clough and DeHart were even more intimately familiar with every aspect of the job—a relief to Dominski, who was working in Boston most of the week and couldn’t be on-site as often as he would have liked. “I trusted them,” he says. “And now they come to my parties,” he adds with a grin.

Modern architecture calls for an interior design that complements clean lines and an open floor plan. Working with Susan O’Neill of Boston’s Dream Merchants, Dominski selected a palette and midcentury modern furnishings that suit the space. The decor complements the architecture beautifully, and vice versa.

“It reminds me of everything I grew up with,” he says. He’s talking about the lamps and the furniture and the architecture, but one gets the sense that the familiarity of having lifelong friends around is what he’s really after.