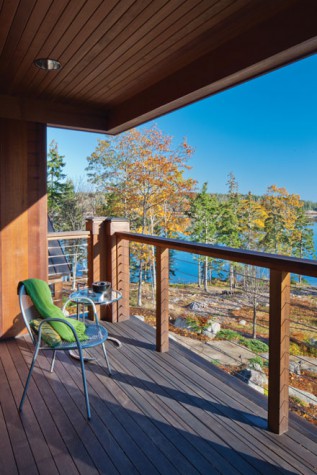 In Stonington, an eastern-facing balcony with views across Southeast Harbor to the Edgar M. Tennis Preserve. The deck is ipê and the ceiling and wall are western red cedar. 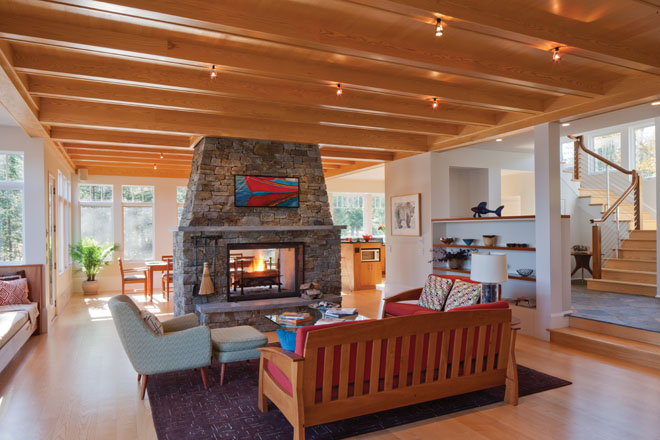 A double-sided, tapered stacked-stone fireplace creates a partial division between the living room and dining room. Built-ins include a bench to the left and cherry shelves to the right. The living room chairs are from Room and Board. The sofa is from Portland’s Green Design Furniture. The painting above the fireplace mantel is by Stonington’s Rebecca Daugherty. 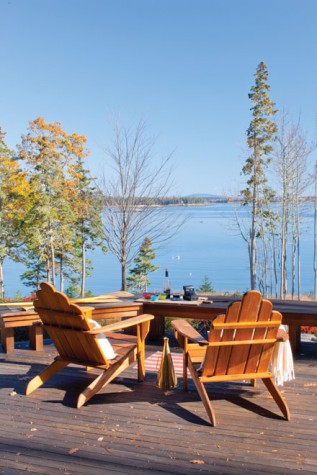 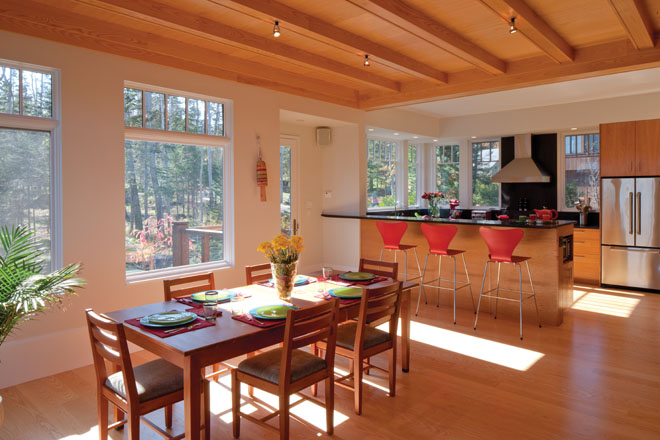 The great room’s floor and open beam ceiling are clad in ash. The pale wood enhances the Scandinavian feel of the dining room/kitchen area. 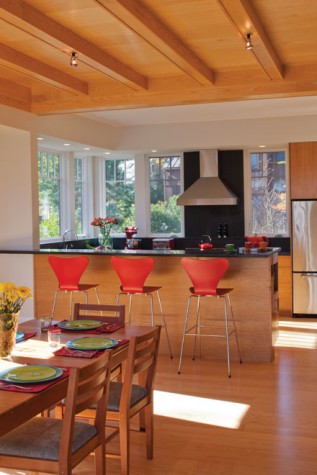 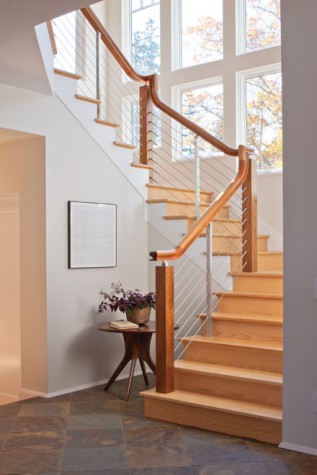 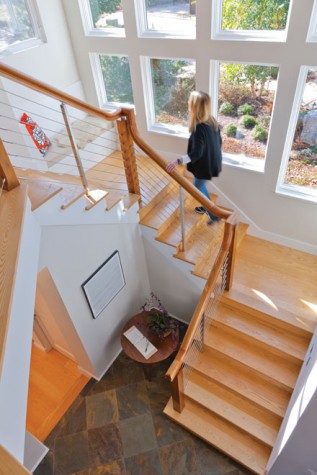 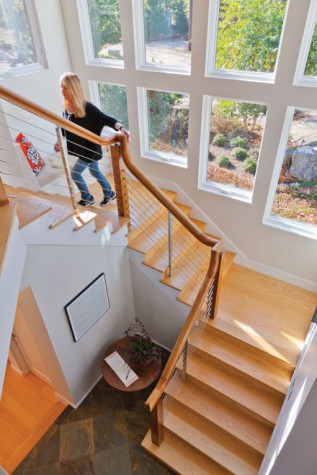 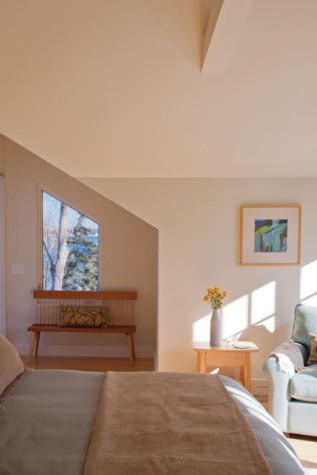 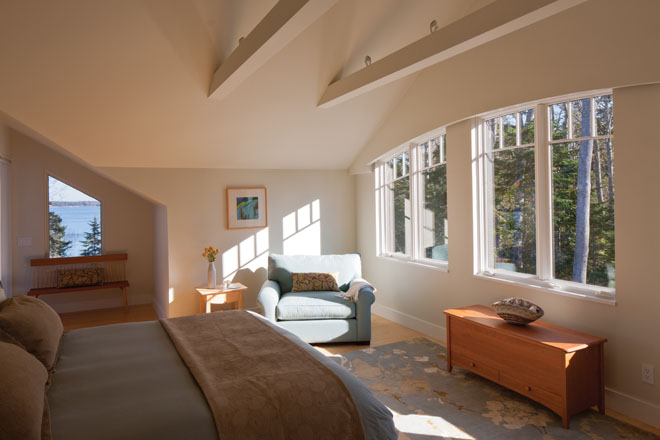 The master bedroom has a curved window and structural beams with up-lighting. Ledge Bound, the painting in the background, is by Barbara Brady of Sedgwick. The bed linens are from Sferra. 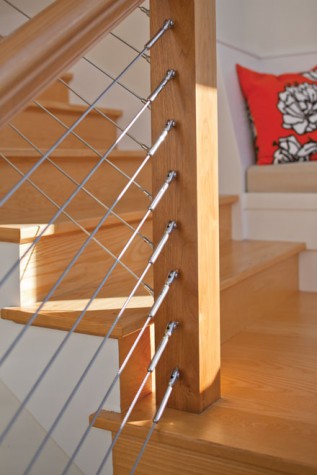 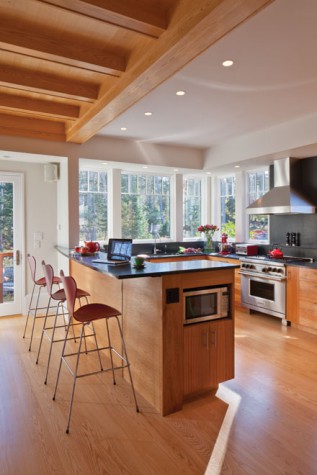 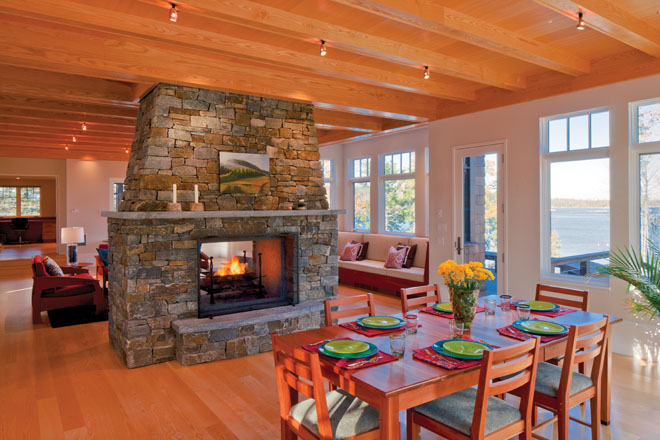 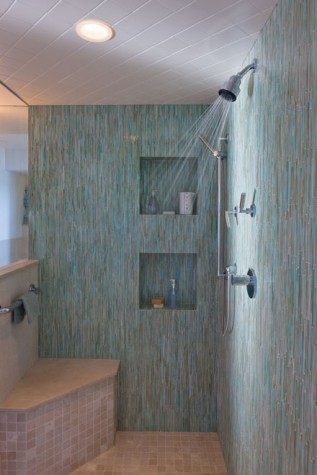 Architect Ayola Greene thinks of the “quiet limestone” in this shower as “similar in tone to ash.” The limestone is inset with watery blue glass tiles. 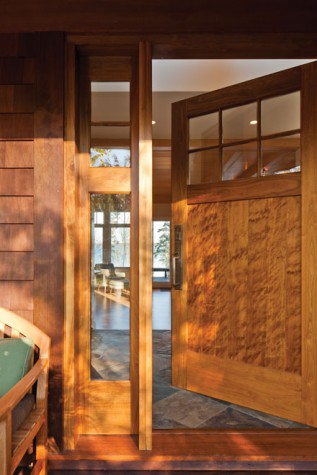 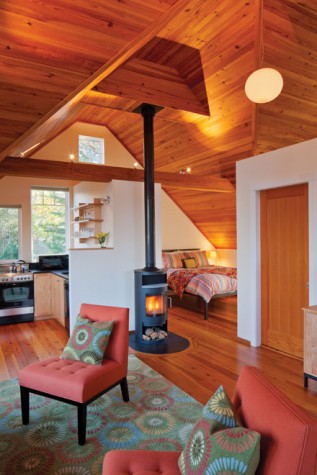 While their main house was being built, the homeowners lived in an apartment above the garage. The floor and intricately shaped ceiling are pine. The chairs are from Room and Board. The rug is from Company C. 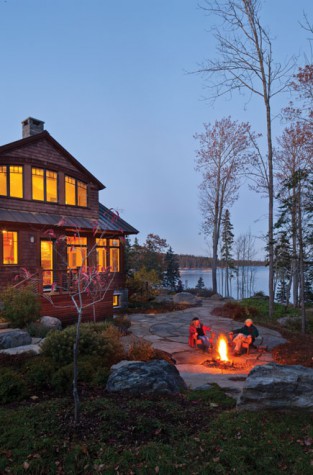 Their careers have taken Michele Janin and Tom Linebarger around the country and around the world. They’ve lived in California, Indiana, Minnesota, New York, England, Hong Kong, and Singapore. The one geographic constant in their lives? Maine. Janin grew up spending a few weeks every summer on Little Deer Isle. Her family always rented the same cottage, and when Janin started dating Linebarger after college, she brought him along. Later, after the couple married and started their own family, they began bringing their two daughters. Over the years, the couple supposed they would eventually buy a place of their own, but they didn’t feel much urgency about the matter. They looked. They noted that the rental cottage was aging. But after they visited properties, they never followed up. Linebarger says their realtor must have questioned his own sanity. Why keep on taking these people out?

But just when Janin and Linebarger decided to stop looking, they visited a heavily wooded three-acre lot in Stonington. Initially, they had to hike in to see what was on offer: a spit of land on Whitmore Neck with spectacular views across Southeast Harbor to the Edgar M. Tennis Preserve. Somehow this seemed just right. Janin, Linebarger, and their girls had often walked the trails at the preserve. Now, the family doesn’t merely look across the water; Linebarger regularly swims to the far shore—past a rock where seals like to sun—and back home again. Janin paddles a kayak by his side. “To keep him safe from the lobster boats,” she explains.

To build a house that would serve as both a vacation home and a possible retirement property, the couple turned to friends on Little Deer Isle for advice about architects and builders. “We asked as many people as we could reasonably ask,” Janin says. Two companies consistently came up: Eric A. Chase Architecture of South Brooksville and Lawson Builders of Little Deer Isle.

“I remember saying that I’d like a not-so-traditional traditional Maine cottage,” Janin says of her early conversations with Eric Chase. “I wanted the feel of shingle style but with more open space and contemporary.”

She also wanted to be able to sleep 14. “We love Maine,” she says. “For us, it is a big family place. If we built here, and everyone couldn’t visit at once, we’d be missing what we wanted to do.” Still, she and Linebarger wanted their new home to be big without looking big. They weren’t out to build an eyesore. They wanted their home to fit the property.

Chase managed the sleeping situation by designing two structures: a barn with a garage and guest apartment and a main house with three bedrooms on the second floor and a television room and office with a Murphy bed on the first floor. Originally, the third floor of the main house was intended as attic space, but after the house was framed and the third floor was built, Janin went upstairs and said, “Oh my goodness, this is the best view in the whole place. We’ve got to make this a room.” The space is now an additional bedroom, and the children’s favorite spot in the house.

Shingled in western red cedar, the main house has copper roofs and oversized windows. The interior spaces are, as Todd Lawson of Lawson Builders says, “light and airy.” The ground floor is dominated by a dramatic open space: a combination living room, dining room, and kitchen that is interrupted only by a large, double-sided stone fireplace. The floors and most of the ceiling are ash. “I love having wood on the ceiling,” says Ayola Greene, a former project architect with Eric A. Chase Architecture. “I think I try to sneak that into everything I do. It’s quite nice for making a modern space warm.”

Wood accents are used successfully throughout the house, thanks in part to Bill Turner, a woodworker who lives down the road from the house. (Turner is also a goat farmer. He and his wife have been making goat’s-milk cheese at their Spruce Hill Farm for more than two decades.) Turner built the butternut cabinetry in the kitchen, the oversized walnut front door, and a Shaker-style ash and cherry bench, among other items. Turner used a piece of ash harvested from the property for an unusual trapezoidal chest of drawers in the foyer. He also hand-turned a walnut handrail with steel cabling for an open staircase that leads past a wall of windows and a reading nook on the way to the second floor.

“This house prominently displays the artistic abilities of local people,” says Linebarger. He’s referring to Turner, but also a slew of others, including mason Jeff Wessel and blacksmith Doug Wilson. Wessel and his nephew Jesse—third- and fourth-generation masons—built the central room’s stacked-stone fireplace out of Van Tassell granite, a departure from the rounder native stone they normally use for chimneys. Wilson, who has a forge on Little Deer Isle, fabricated the fireplace’s screen, wood holder, and tool set. Linebarger says that Wilson typically finishes his job with a small gift to his clients, usually some item from his forge. When Wilson asked him what he wanted, Linebarger asked if he could work with Wilson for a day. The result was an iron hook that now holds the barn door open.

The barn has many of the same pleasures as the main house—furniture and built-ins by Bill Turner, a wood ceiling, and a western red cedar exterior—but everything has been given a twist. The furniture is more rustic, the pine ceiling is complicated by the barn’s intricate roofline, and the exterior is sided with vertical tongue-and-groove boards. Instead of a stacked-stone fireplace, there is a small contemporary Danish woodstove.

“The homeowners had a lot to do with the final look of this house,” says Lawson, and the home was customized for the couple in some unusual ways. Both Janin and Linebarger are tall, so the kitchen counters are a few inches higher than they ordinarily would be. Because Linebarger is such an avid swimmer, there is a path that leads straight from the ocean to a basement shower room outfitted with subway-tile walls, a slate-tile floor, two benches, and three showerheads. On any given day, it also contains several drying wetsuits. “The kids love to pile in there,” Linebarger says. The dog, when she needs a wash, also visits.

The cottage that the couple used to rent on Little Deer Isle had a deck with a long built-in bench. It was perfect for drying swimsuits during the day or lingering over cheese and crackers in the evening, so the new house has a similar bench on its deck. Because so many children visit the property, landscape architect Bruce John Riddell of Boothbay integrated a meadow that can be used as a soccer field. He also designed a patio with a fire pit and a stone grotto for a hot tub. Even smaller items in the house were customized by local talent. A Stonington man fashioned the entryway doormat. “Can you make that bigger?” Janin asked, when she went to buy the rope mat. Janin was hoping for something scaled to her large front door. The man obliged. “I loved that,” Janin says, as she steps out onto the mat to say good-bye to departing visitors. “Every time I come back here, I see an artist’s work in everyday use.”