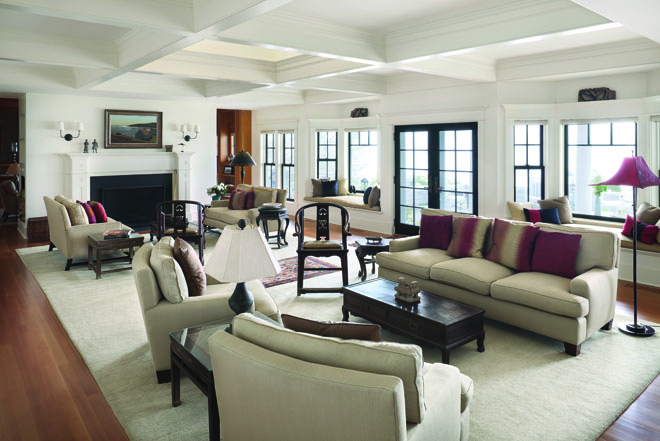 A light-filled opening in the coffered ceiling defines the seating areas in the living room. Nestled around slate fireplaces, the groupings include a Barbara Barry sofa and armchairs from Baker, and a pair of sofas (in the background) by Kravet. Sprinkled throughout are Chinese antiques, such as two elm horseshoe chairs from Michael Dunn Antiques in Wiscasset. 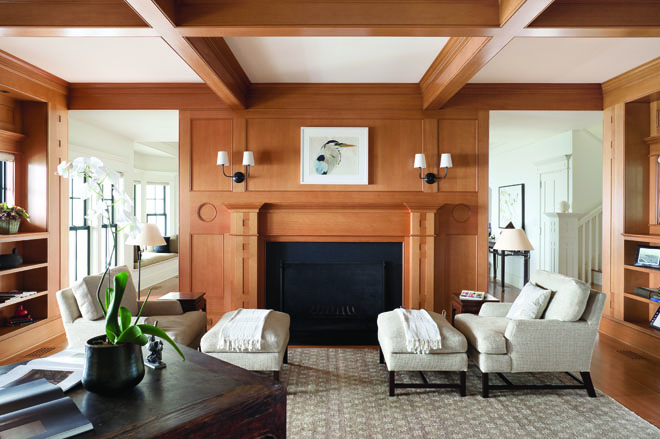 Ezra Howell of E.H. Fortner Woodworking paneled the fireplace and built-in bookshelves with Douglas fir to distinguish the library from the whitewashed rooms beyond. A recessed circle motif plays off the angular designs in the woodwork and carpet. “This project had a lot of appeal for me personally because of its traditional style and the wonderful mix of materials, such as classical stonework and millwork,” says builder Jay Fischer. 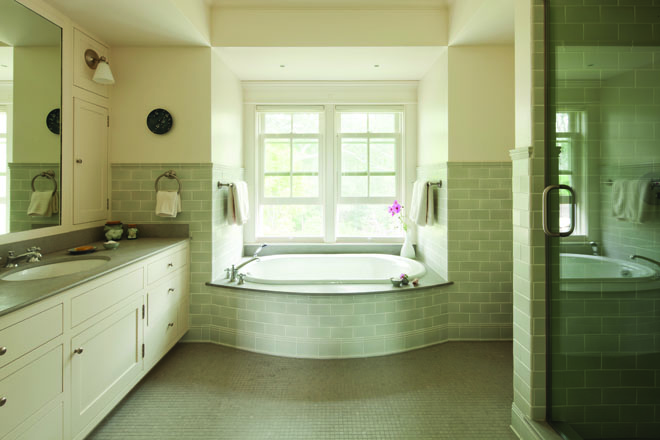 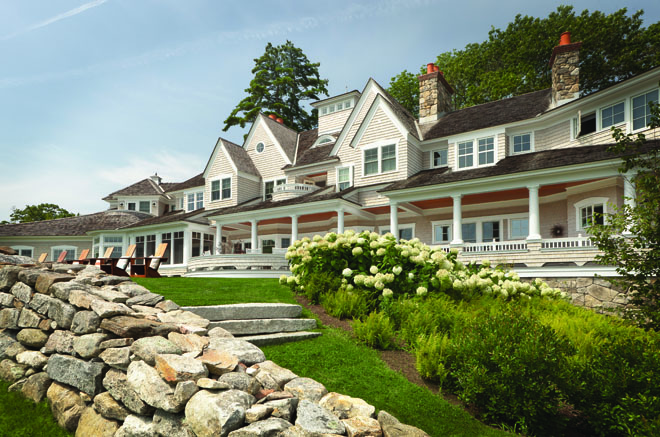 The water side of the home features an enclosed porch, a deck that extends 80 feet along one end, and a set of mahogany seats interior designer Donna Janville calls “the perfect martini chairs.” All of which leaves the homeowners with a dilemma: where to kick up their feet? 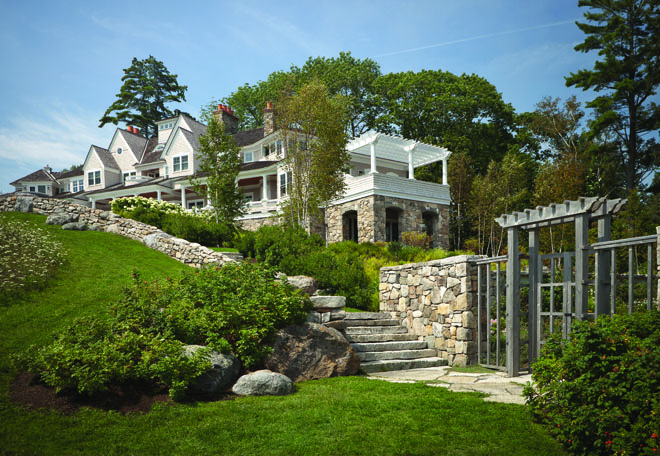 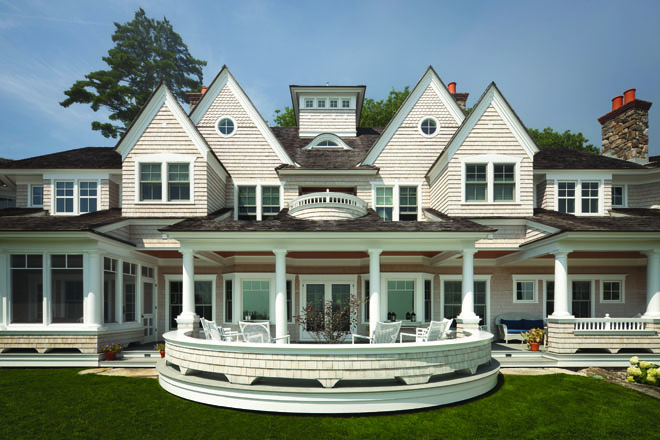 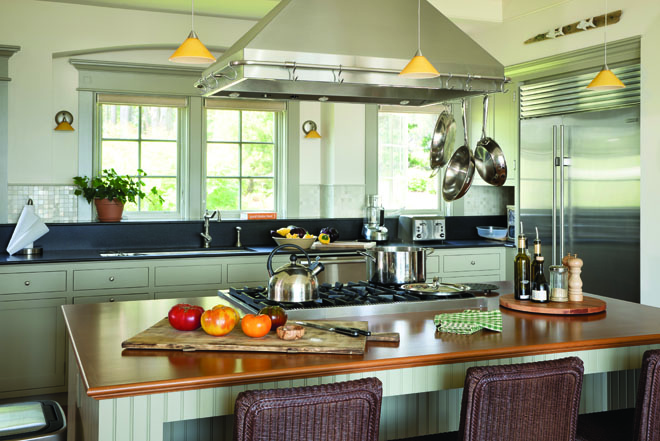 A variety of textures—Douglas fir and Zimbabwe granite countertops, a marble backsplash— and soft shades enliven the kitchen, without distracting from the view. The custom cabinets are painted in Ralph Lauren’s Cathedral Gray. 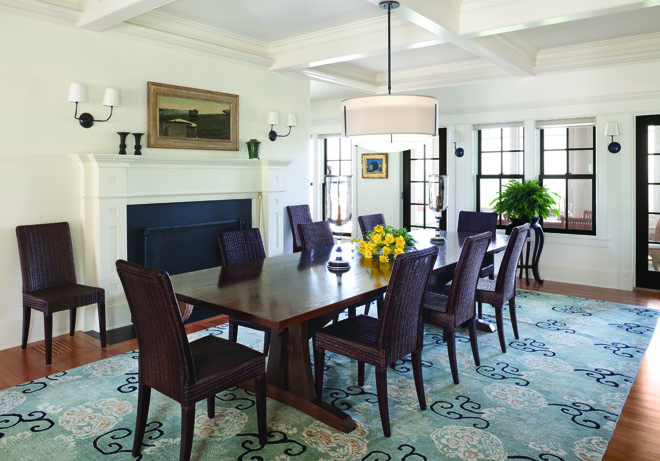 A handcrafted, oak trestle table is the dining room’s centerpiece. Janville paired it with Asian-inspired pieces, including a wool rug from Steven King Decorative Carpets, rattan chairs from Janus et Cie, and a Hubbardton Forge pendant from Fogg Lighting in Portland. 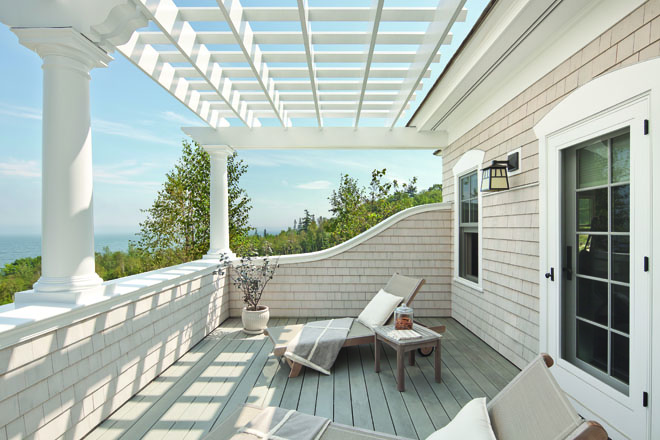 From a deck with a pergola off the master suite, you can see the faint outlines of North Haven and Vinalhaven Islands in the distance. 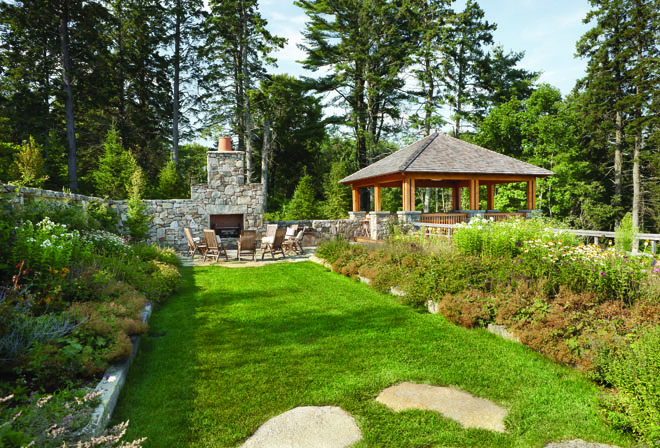 In the enclosed garden, teak chairs are huddled around a massive fieldstone fireplace, which is crowned with a chimney pot to match those on the house. The homeowners are planning the hearth’s maiden cooking voyage this year. 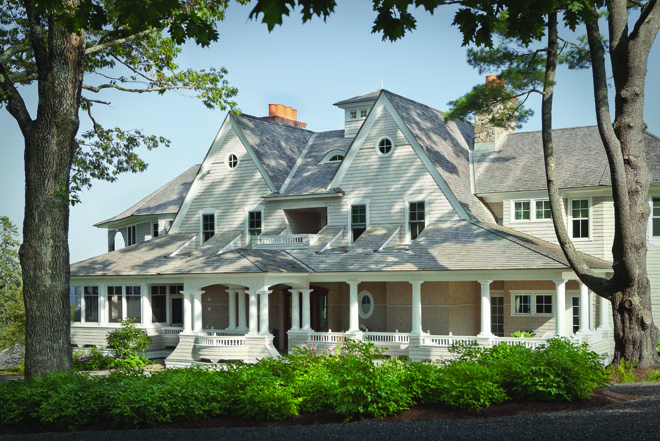 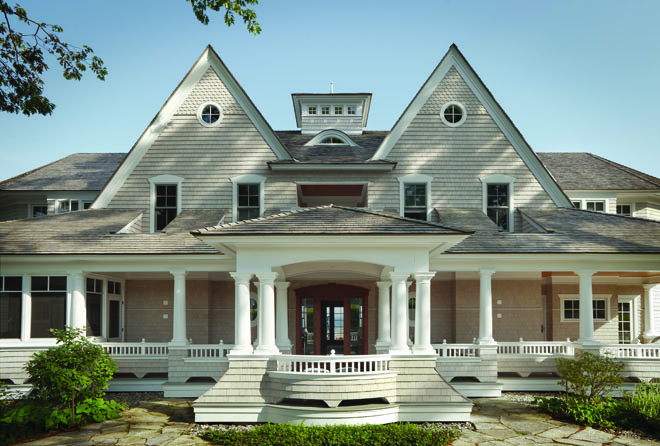 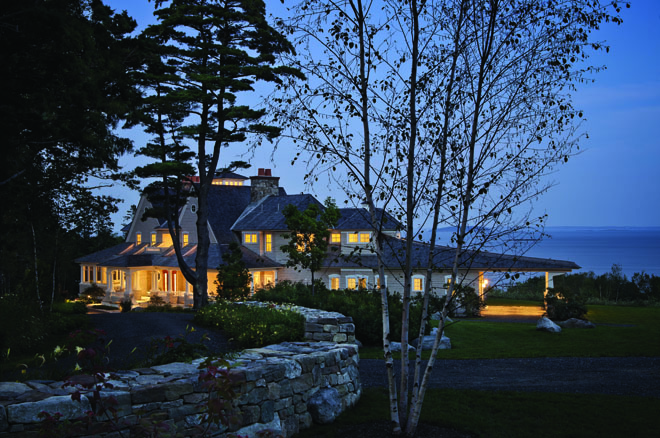 Long, curving stone walls along one side of the driveway “make you feel as though you’ve entered the English countryside,” says architect John Edward Gillespie. From the porch, you can glimpse a herd of Belted Galloway cows grazing in the pasture next door.

A gorgeous view guides the design of a Rockport summer home

Moving through the sweeping, gable-roofed home that Camden architect John Edward Gillespie designed in Rockport, the view unfolds like a series of paintings capturing a single scene. In room after room, southeastern-facing windows frame an expansive meadow sloping down to the blue of Penobscot Bay, the perspective shifting slightly from each vantage point. From the central living room, you see a wide stretch of land, water, and sky. When you’re in an upstairs office, the ocean dominates, its cobalt shade fading to a pale ribbon along the horizon. And when you look out from a second-floor bedroom, a forest and a giant osprey nest fill in part of the foreground.

Gillespie devised the long, relatively narrow floor plan—most of the ground level is one room wide—to maximize the water views. A majority of rooms have window seats or porch access (or both) to promote lingering. And yet, the sea isn’t the only spectacle here. Through the windows on the northwest side of the house you can peek in on the neighbors: a herd of Belted Galloway cows that live on an adjacent farm.

The famed black cows with white “belts” around their midsections are what drew the homeowners, who live most of the year in Virginia, to this spot in the first place. In 2006 the husband and wife were driving up the coast from their camp in Oxford County, “doing what everyone from out of town does, looking at properties,” says the wife. “We weren’t looking to buy anything, but we came across a newspaper ad for this piece of land and it had a photo of the Belted Galloways, which was a thrill for us because, years ago, we brought our kids here to see the Belties. When we walked down the road to see this place for the first time, it took our breath away.”

After purchasing the 17-acre property, they turned to Gillespie, his wife, interior designer Donna Janville, and Jay Fischer of Cold Mountain Builders in Belfast to help them create a home that would suit the site and their traditional sensibilities. To Gillespie’s great pleasure, they settled on a shingle-style structure. “It’s my favorite architectural style because it’s indigenous to this region and it has a wonderful human scale with the porches and columns and window seats and lots of places to go and be alone,” he says. In this house, privacy is maximized by four separate staircases that culminate at his-and-hers studies on either end of the second level and guest quarters in the middle. “We wanted people who stay here to feel like they have their own space, and the homeowners needed a place to work and do their own thing,” says Gillespie.

The first floor, however, is designed for entertaining. The library, living room, and dining room lead one into the next, separated only by fireplace walls. The couple wanted the rooms to feel cozy but comfortable for a crowd—they frequently have their three grown children and their significant others staying with them, and they have hosted fundraisers for as many as 70 people. “We love how it’s wide and easy to get around, not like you’re having to squeeze through a narrow passageway or door,” says the husband. A long bank of windows, visible from the moment you step through the main entrance into the living room, adds to the airiness. “I always want to see right through a house when I come in,” says Gillespie. “Especially in a home of this size, it’s important to be able to instantly understand your surroundings. The design also highlights the view and allows for cross-ventilation.”

To create a serene, cohesive feel, the homeowners chose old-growth, vertical-grain Douglas fir flooring and a quiet color scheme. “That’s the show,” says the wife, gesturing out the kitchen windows. “We didn’t want a lot of bright colors or things that would compete with the beauty outdoors.” Instead, they went for architectural drama. Gillespie designed a deep coffered ceiling for the library, living room, and dining room, and a recessed square motif that is repeated on all the woodwork. In the center of the house, one of the coffers is cut out, allowing you to see from the living room straight up to a cupola 35 feet overhead. A cloud-like paper lantern, flanked by four sidelights, fills the space with a mesmerizing glow at night.

Janville used the grid on the ceiling to determine the placement of the furniture and carpets, which are rendered in mostly neutral fabrics and dark woods. Over the course of decorating the home, the owners developed an interest in Chinese antiques, which are on display in many of the rooms. “They seemed like a natural fit for the calmness of this place,” says the wife. The curvaceous forms and intricate carvings also serve as a nice counterpoint to the geometric architecture. “The homeowners wanted a classic feel, but they really allowed me to be very eclectic,” says Janville, referring to items such as the contemporary drum lampshade that hangs over the dining table and the pair of antique Irish hall chairs on either side of one of the living room fireplaces. “Everything is in sync, but not too expected.”

Despite its ambitious scale, the home, like its decor, was designed to be as unobtrusive as possible. An established view corridor meant the owners couldn’t build any closer to the shore, but they also didn’t want to cut down any of the trees surrounding the meadow or bordering the farm. “Essentially, where we put the house is the only place it could be to capture the views and maintain the integrity of the landscape,” says Gillespie. “And we only ended up losing one tree.” The exterior white-cedar shingles are quickly fading to a soft gray. And the guesthouse, which is positioned kitty-corner behind the main house, is coated in Benjamin Moore’s Black Forest Green, a shade of paint that “appears to recede, especially at dusk,” says Gillespie. “And when you’re on the water looking up here, the whole building disappears.”

To define the front lawn, Stephen Mohr, of Mohr and Seredin Landscape Architects in Portland, designed a fieldstone wall interspersed with boulders for a less formal feel “that looks like it’s been there for a century,” says Gillespie. Granite steps built into the hill along one side of the wall lead to a secret garden of sorts. The structure, composed of tall stone walls and accessed through a pergola, contains beds brimming with roses, daisies, lady’s mantle, and lilies, along with an outdoor fireplace and a pavilion for dining. Originally, the spot was slated for a pool, but the homeowners decided to change course midway through the project. “There’s infrastructure there for a pool, so let’s just say it’s the sturdiest garden you’ve ever seen,” says the husband. “It was the right decision,” adds his wife. “We’re really enjoying this space as a place to entertain and spend time with family.”

Aside from the acre and a half that is taken up by the house and its outbuildings, the property remains largely untouched. And the homeowners plan to keep it that way. Like the curators of a masterful work of art, they feel obliged to preserve this spectacular slice of the coast, and to pass it on.