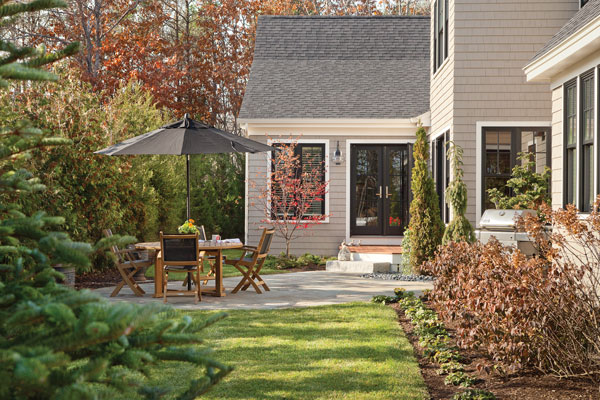 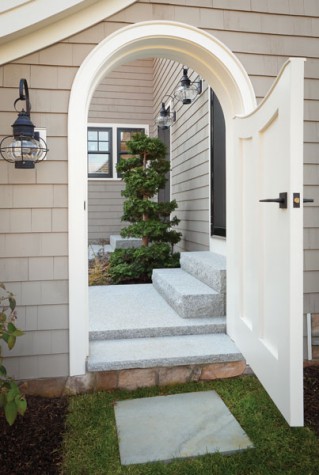 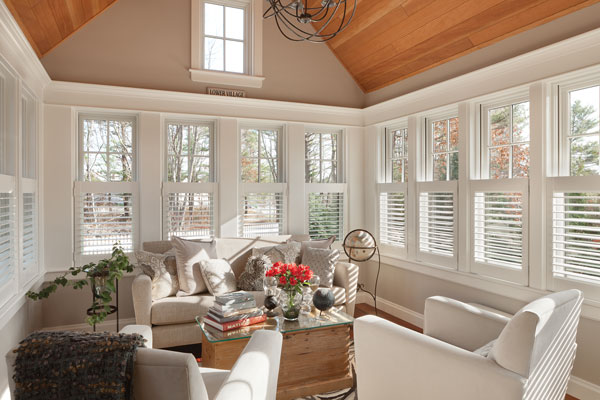 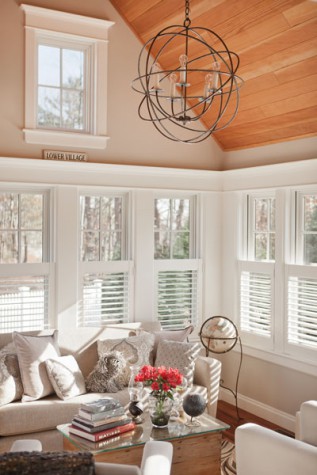 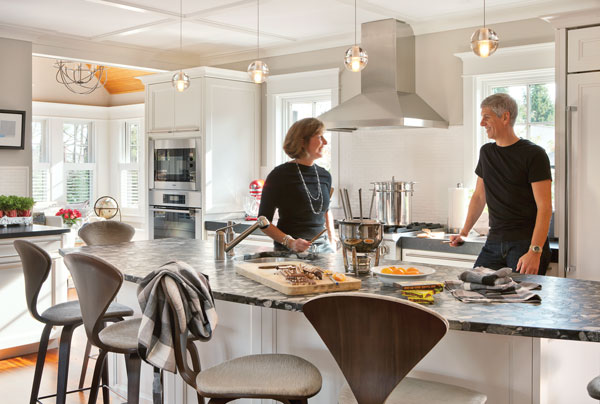 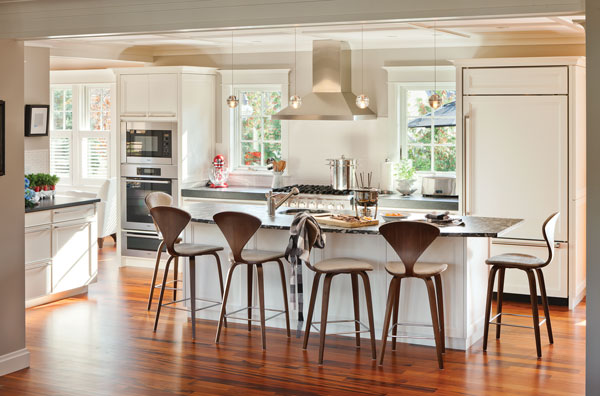 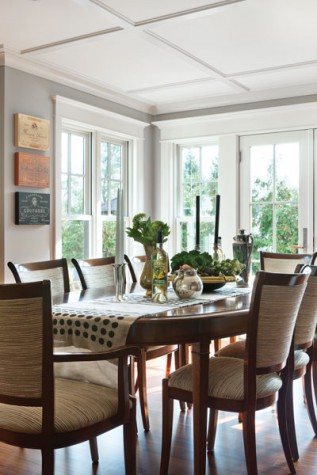 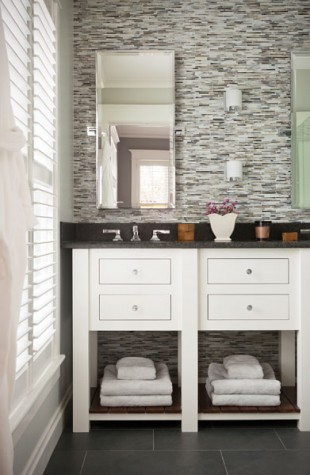 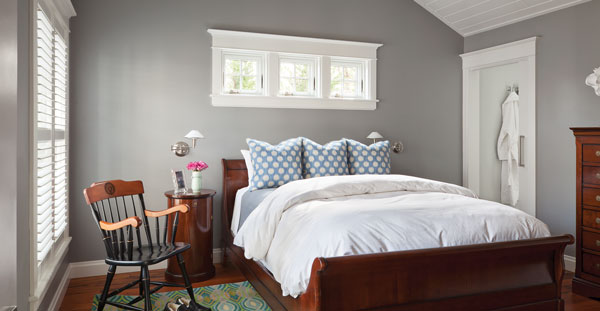 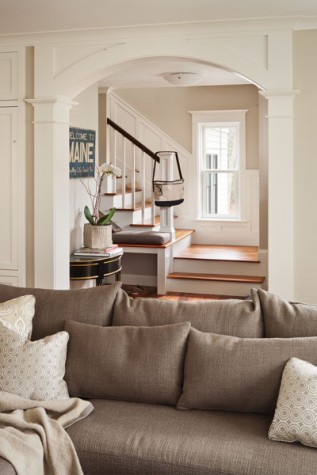 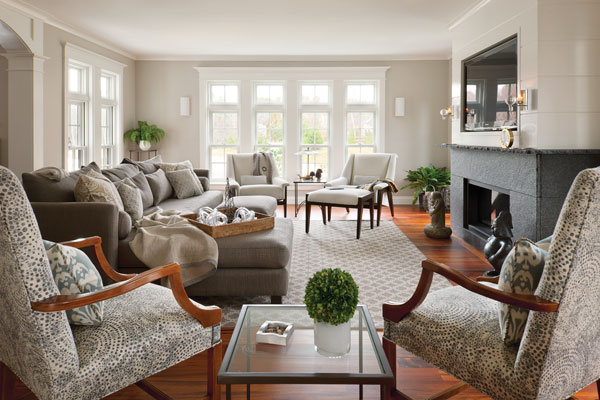 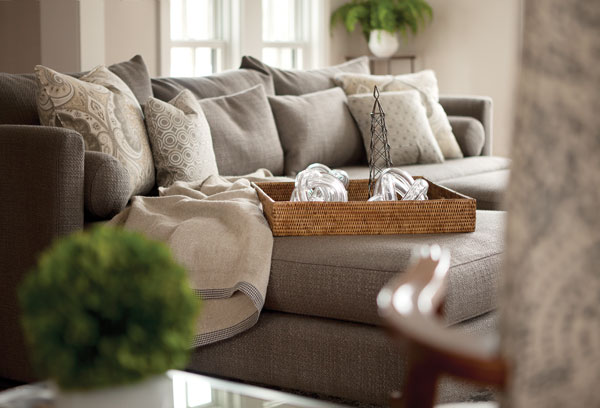 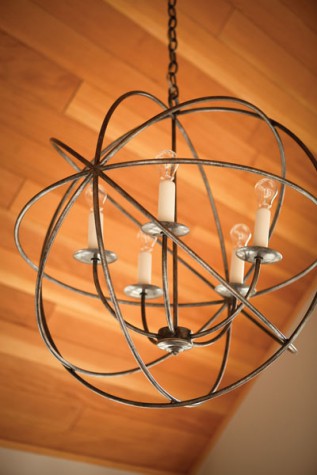 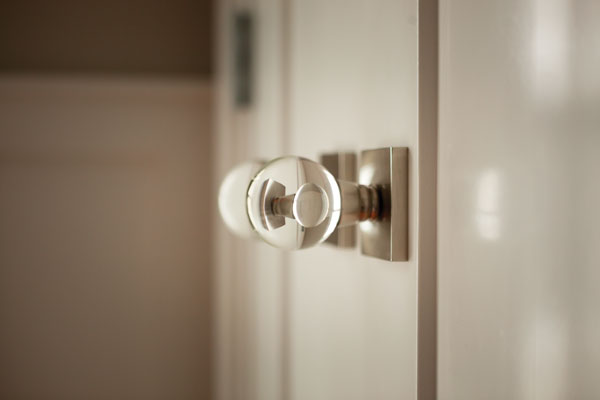 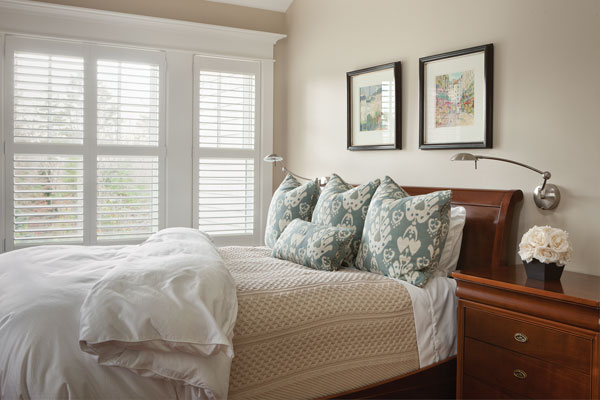 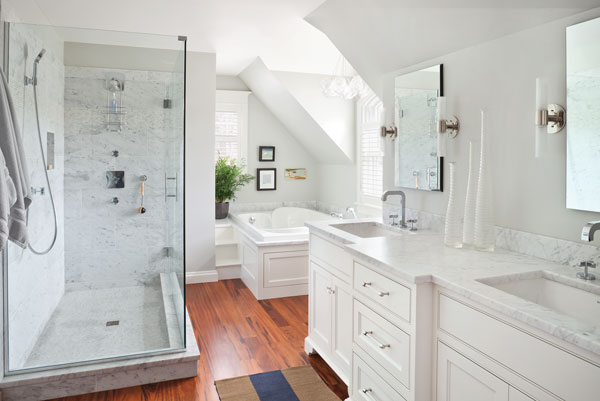 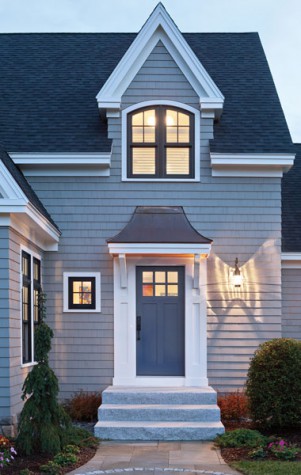 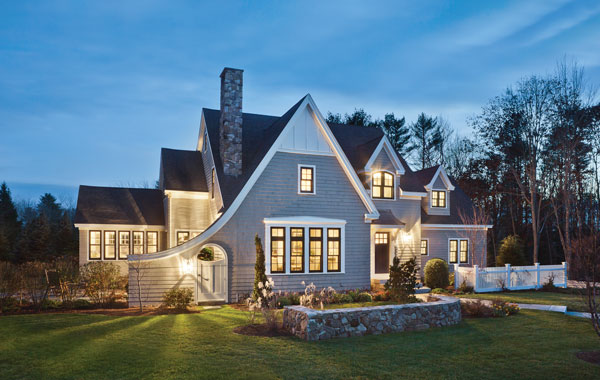 City dwellers are an adaptable bunch. Fueled by the hustle and bustle, they aren’t deterred by a little background noise, and somewhere along the way have made peace with the fact that their personal space is, well, shared. And while most of Maine offers quite a different experience, there are places here where city lovers feel more at home. Take Robin and Kelly Kavanagh, for example. “We’re city people,” they say emphatically during a conversation at their Kennebunk home. After living in Boston for more than 20 years, the couple traded in their single-family South End home, put their furniture in storage, and moved into a 1,000-square-foot contemporary condo downtown—all so they could save up to build their future home in Maine. In Boston they love being able to walk everywhere, having access to countless great restaurants and art galleries, being in the thick of it all. Although Kennebunk is a far cry from a big city, when the Kavanaghs decided to build in Maine, Lower Village was a natural fit—an in-town location, within walking distance to everything they needed. They would be at home here.

Kelly and Robin have been together for 28 years, but long before they met, the two spent their childhood summers in Maine—she at Wells Beach and he in the Sebago Lake region. Since they’ve been together, they have made annual trips to Goose Rocks Beach, where Kelly’s sister and her family have summered for decades. Somewhere along the way they began dreaming about having their own home in the Kennebunks.
But it was the land that came first. “It was a big decision,” says Robin. “There were these beautiful properties near Goose Rocks, but we didn’t want to be out that far, and we were not looking for a large three-acre lot in the woods. Our preference was for a smaller size lot that would allow us to walk to the beach and into the port.”

Luckily, the search for the right builder was easier. The couple gravitated toward the homes built by Kevin Lord of Thomas and Lord in Kennebunkport, so they tracked him down. “It wasn’t long before he called to tell us he had the perfect spot,” recalls Robin. “We’d be able to walk to Dock Square and the beach, still have a nice-sized yard, be close to family on Goose Rocks, and have a custom home.” Intrigued, the two were introduced by Lord to Tim Harrington, the developer behind the Cottages at Morning Walk, which Lord was building in collaboration with designer Erik Peterson, of Peterson Design Group, and landscape designer Ted Carter of Ted Carter Inspired Landscapes.
When they first saw the property, it was pouring rain. Huddled underneath a golf umbrella, Kelly and Robin were a little skeptical at first. “You promise me this is the sunniest lot?” Kelly asked. Harrington said, “Trust me.” So they did. With everything.
“It seemed like a perfect fit,” says Robin. The Kavanaghs loved Tim’s vision of a small grouping of cottage-style homes with sea-shelled paths into town, coupled with having Lord, Carter, and Peterson to work with as their team. “We felt comfortable that we were in good hands based on the experience, quality, and workmanship they brought to the table, along with their willingness to work with us as very hands-on clients.” The couple also loved Harrington’s plan for the Galleries at Morning Walk—a community of eight individual cottage-style gallery spaces for artists and artisans. “The minute we saw that was part of this plan for the neighborhood, we were on board,” says Kelly. “We have so much art near our home in Boston. And we’ve loved getting to meet some of the artists here. It’s so exciting having them just down the road.”

After selecting their lot—the one that promised maximum solar exposure—the Kavanaghs chose a floor plan that was originally intended for another lot. The features that sold them on the design? The swoop of the front roofline and the many (seven) gables. Although the Kavanaghs had renovated several homes before, this was their first time building new. The ability to put their own personal mark on the house as it was being built was important, as was having the ability to consult with their Boston-based interior designer, Daniel Reynolds of Daniel H. Reynolds Design Collaborative, a trusted friend with whom they had worked on previous projects. Luckily for the Kavanaghs, Lord and Peterson were open to the collaboration, and working together they made some modifications to the original plan that included adding a second master suite on the first floor (for Kelly’s parents). “From the front, the house looks very much like it did in our original design,” says Peterson. “The idea was to create an English cottage–style house that presents smaller than it really is.” Reynolds also helped make some additional adjustments to the interior design by opening up cathedral ceilings in some of the bedrooms. He also suggested Anderson A-series windows in black to give, as he says, “a little modern twist to the traditional cottage feel.”

With the goal of living full-time in the house after retirement, the Kavanaghs’ list of must-haves included an open-concept approach to the kitchen, living room, dining room, and sunroom; enough bedrooms and attached baths to accommodate guests; and a seamless indoor-to-outdoor flow. As a result, virtually every room provides access to the outside, and all of the exterior doors lead to a common backyard. “We love being able to open the doors—day or evening—and have it all illuminated. We wanted a home where our outside spaces would be extensions of our living space,” says Kelly.
Although the Kavanaghs love their contemporary loft in Boston, they wanted a space and aesthetics that were slightly less modern for their Maine home. “The goal was to make it contemporary, but not too contemporary,” says Reynolds. The resulting style lies somewhere in between: an open layout outfitted with furniture that the couple has collected over the past 20 years—masterfully reupholstered to suit the space. Working with Reynolds, the Kavanaghs made careful color selections that, to this day, are still ongoing—a collaborative evolution. “Educated clients realize the value of good design,” says Reynolds. “Kelly and Robin are visual. They like collaborating and bringing things together.”

Until the Kavanaghs reach retirement age, their time in Kennebunk will always end with a trip back to Boston, back to work, back to everyday life. But someday, this house they so carefully built and designed will be their permanent home. With all the charms of Kennebunk right outside their door.