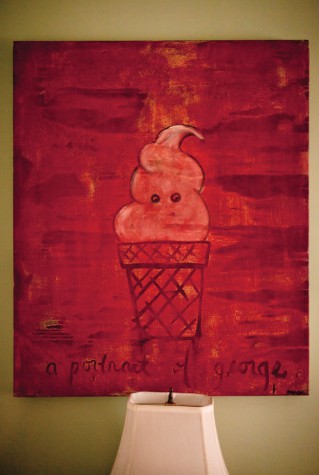 A painting by Heather Hagle with the words “A Portrait of George” under the image of an ice cream cone. 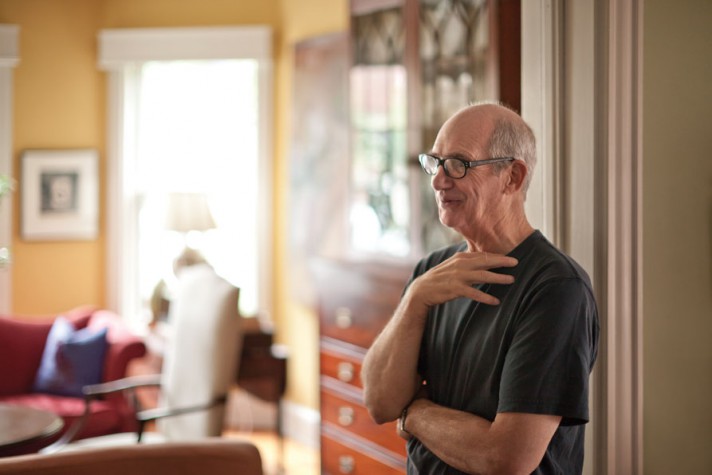 George Smith, the founding director of the Institute for Doctoral Studies in Visual Arts (IDSVA). 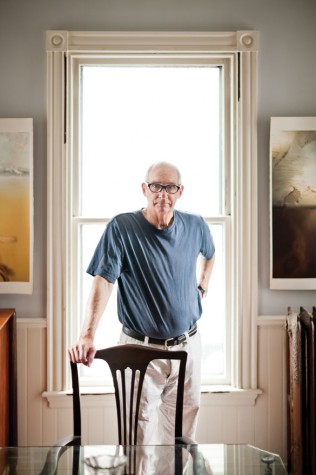 George Smith, the founding director of the Institute for Doctoral Studies in Visual Arts (IDSVA ), in the dining room of his home in Portland’s West End. 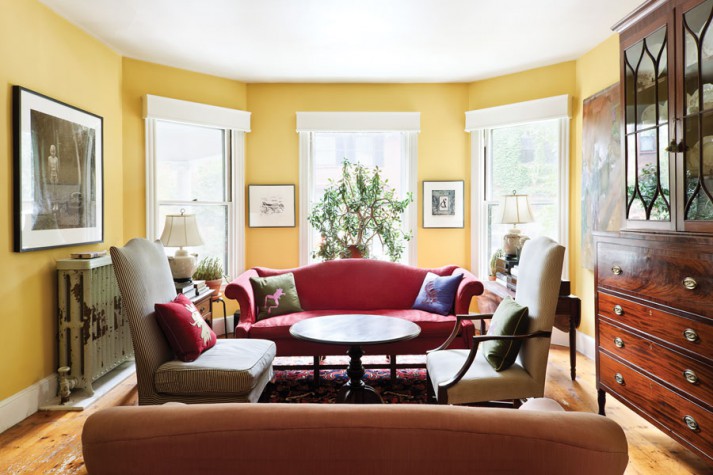 The front parlor of Smith’s late Victorian home is filled with paintings by friends and former students. 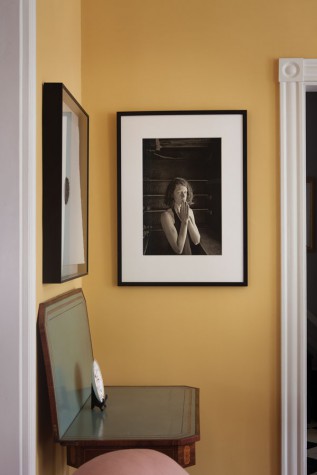 A photograph by Jack Montgomery, an attorney at Bernstein Shur. 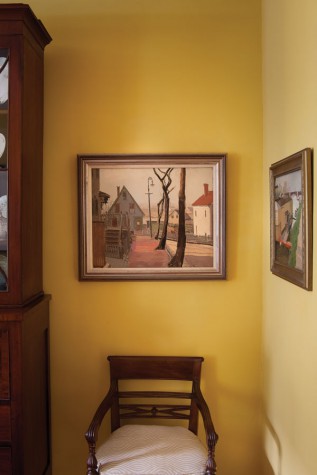 An oil of the northwest side of Bunker Hill, painted circa 1900 by Smith’s ancestor Edmund Quincy. 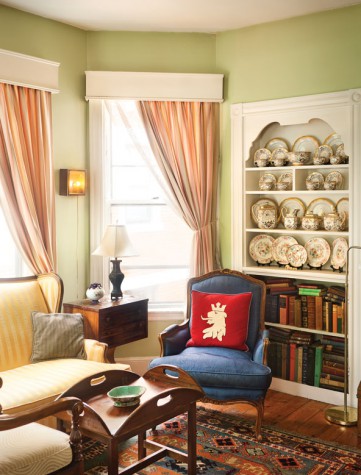 A corner of Smith’s back parlor, showing part of his china collection and a pillow by his wife, Amy Curtis, who is a former couture wedding dress designer. 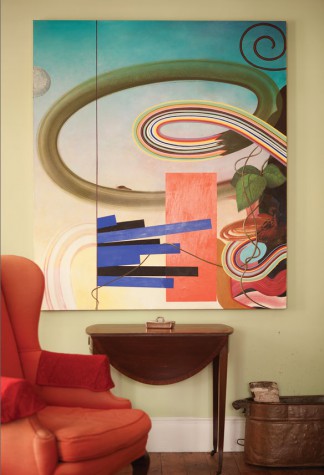 A painting by Sean Foley, former head of painting at Maine College of Art. 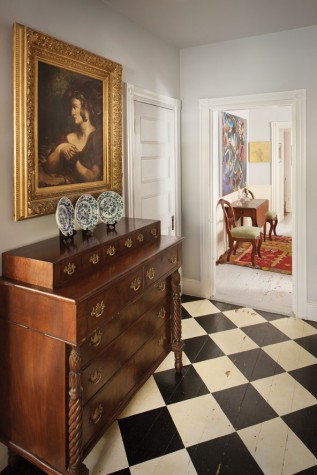 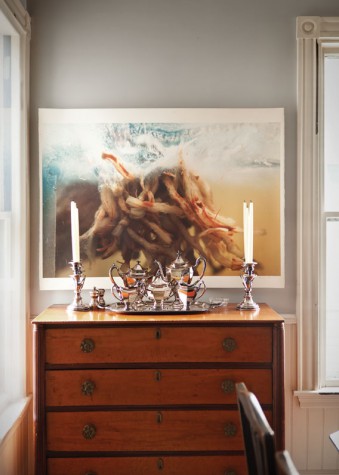 A large-format print by Katarina Weslien shows organic and synthetic detritus in a glass vitrine. 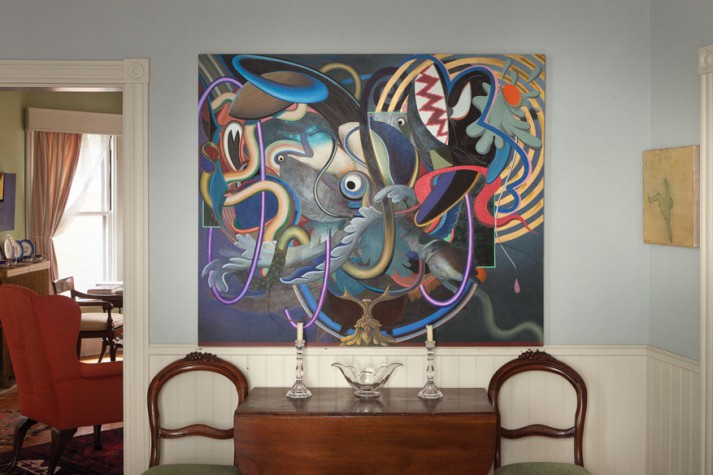 Two weeks after George Smith bought this Sean Foley painting, the DeCordova Sculpture Park and Museum in Lincoln, Massachusetts, asked to borrow it for an annual exhibition. The painting ended up being used as the exhibition catalog cover. 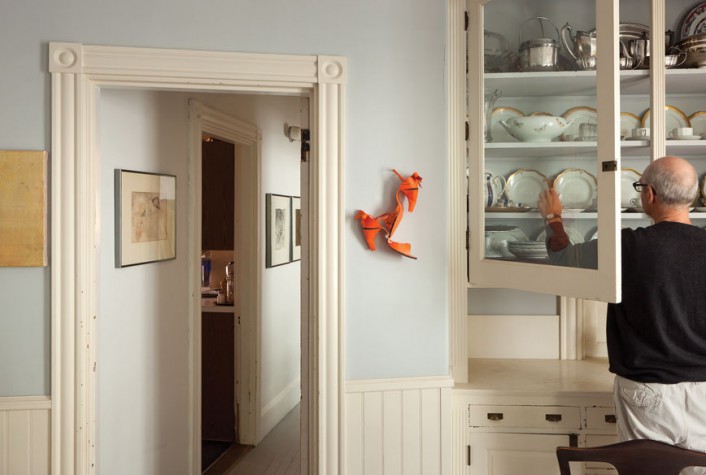 Mosako Roberts, one of Smith’s former students, made a pair of intertwined shoes from the cardboard of designer shoeboxes. 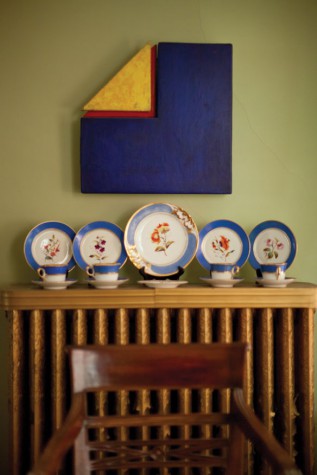 A work by Paul Letourneau, a Portland lawyer who is a former student of Smith’s, hangs above a hot chocolate service set of nineteenth-century French porcelain. 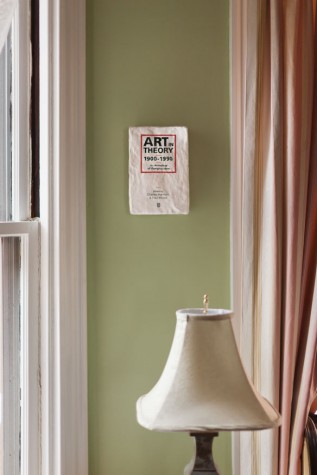 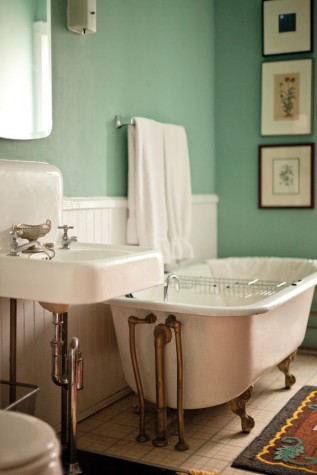 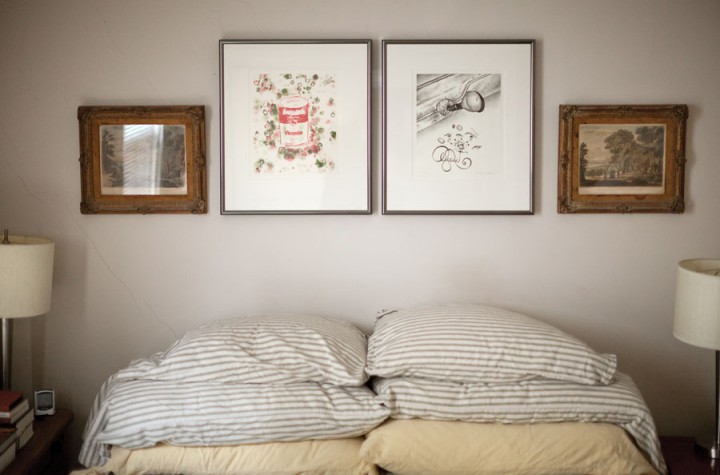 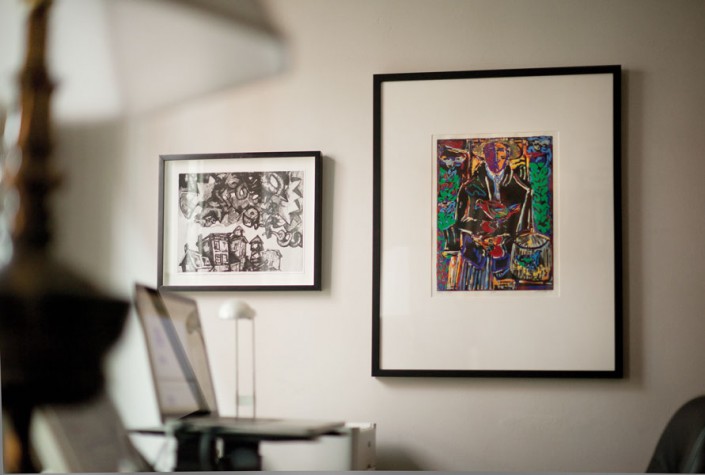 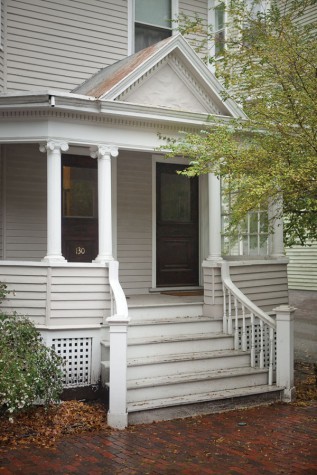 Half the fun of visiting George Smith’s 1890s home in Portland’s West End is seeing all his art. The other half is hearing about all his art. For those who know Smith, this will be no surprise. He’s an affable, well-spoken intellectual, quick to passionate observations about the connections between artistic creation and intellectual history. But it’s not art analysis that makes a visit so entertaining, though there is that to be had if one asks for it. Smith is first and foremost an educator, after all. He taught theory at Maine College of Art (MECA) before serving as the school’s dean and vice president for academic affairs and then as founder and co-director of its low-residency MFA program. More recently, he has been serving as founding president of the Institute for Doctoral Studies in Visual Arts (IDSVA), an unusual PhD program that takes artists to Spannocchia, Venice, Paris, Berlin, Harlem, and beyond for theoretical inquiry. What makes a visit to Smith’s home so engaging are the stories he has to tell about how he acquired each piece in his collection, tales that offer a glimpse into his personal history while underscoring just how strong the teacher-student bond can be.

Sitting in the front parlor of his four-unit home on a recent morning, Smith says, “Almost everything in this house was accidental.” Although his art collection certainly looks curated—leaning heavily to postmodern experiments and contemporary art—Smith explains that the pieces weren’t selected so much as given. He points to a large oil painting and says, “When I gave my first lecture at MECA, which was then the Portland School of Art, there was a guy in the undergraduate class in theory who was a bouncer at Deweys.” Smith is referring to Three Dollar Deweys, a restaurant and alehouse on Portland’s Commercial Street, and to James Rose, who is now a New York artist of some note. “In response to the lecture, he made a painting of the interior of Deweys and gave it to me.”

Smith smiles and tells another story, this one from his pre-MECA years when he taught literature at what is now the University of New England. As he remembers it, a student named Paul Letourneau came up to him one day and said, “I want to be an artist.”

Smith recalls, “I said to him, ‘You’ve never been out of the state of Maine. Pack up your car, go to California, and be an artist.’”

Smith laughs and adds, “I was just being flip. I never saw the kid in class again. Six years later, the doorbell rings, the kid is there, he hands me this painting, and says, ‘I’m an artist.’”
The gift he received that day—a blue-painted Styrofoam square with overlapping red and yellow triangles in one corner—now hangs in Smith’s back parlor.

On a nearby mantel is a sculpture by Shannon Rose Riley. When Riley was an undergraduate at MECA, she worked with heart-surgery patients at Maine Medical Center. For her senior exhibition, she manufactured a dozen bronze hearts that she placed on narrow rods. When Riley left Portland for graduate school, she gave Smith one of the hearts.

A cabernet-colored painting of a cartoon ice cream cone floating above the words “A Portrait of George” is by a former MFA student named Heather Hagle. It would be an interesting—if puzzling—piece, if not for George’s explanation of Hagle’s inspiration: “Everyone has at least one meltdown in the course of an MFA. And when my students did, I’d put them in my antique Mercedes and drive them to Red’s Dairy Freeze for ice cream. Then we’d drive along Shore Road to talk about what the issue was, and by the time the ice cream was done, they were all better.”

Another former MFA student, Mosako Roberts, is responsible for a pair of shoes made from the cardboard of designer shoeboxes that hangs on the dining room wall, as well as a sculpted version of Art in Theory, 1900–1990, a text that Smith used to assign in his MECA theory classes.

Not all of Smith’s art comes from former students, though. A work by Lauren Fensterstock hangs in the front parlor. It consists of a dark circle in a white expanse that proves, on closer inspection, to be made of mosquitoes. In the foyer, there is a small pen-and-ink by Aaron Stephan that is captioned with the words “Two Olympias for George.” The piece depicts duplicate versions of Manet’s famous Olympia. “If the modern is to make it new,” Smith observes, “the postmodern is to make it new again. The trope is that Aaron made it twice again.” The dining room is dominated by three of Katarina Weslien’s large-format IRIS prints. Each depicts a different water-filled glass vitrine that contains synthetic objects and the residue of organic material that has been left to rot.

Some of Smith’s collection is the result of exuberant impulse. Once, during a studio visit with Alison Hildreth, Smith found himself discussing the relationship between Dante, classical poetry, and the visual arts. When he left, Hildreth gave him a painting of Icarus falling. “The conversation was just so terrific and this commemorated it,” Smith says. Another time, Smith had to get a new car because his Labrador puppies had chewed up the leather upholstery of his antique Mercedes. Smith had saved up just enough money to buy a junk station wagon. On his way to pick up the car, he stopped at the Portland studio of Sean Foley. “Instead of getting the station wagon,” he says, “I got a painting.”
Although art is the primary pleasure in Smith’s home, it isn’t the only one. Smith is a collector of china, much of it inherited Limoges, but some he acquired on his own, including an 1835 Russian tea set. The home’s furnishings—its antique chests and upholstered Victorian furniture—are also partly inherited. “I arrived here,” Smith jokes of his home, which he bought 16 years ago, “as a bemoaning caretaker, lugging around all this family stuff.”

Part of what makes the contemporary and antique pieces work so well together are the choices of wall color (Smith gives credit to his daughter) and the upholstery. Perhaps the most pleasing pops of color can be attributed to Amy Curtis, Smith’s wife of four years. For the home’s front rooms, she sewed playful pillows covered in lilac and plum, wine red and tan, moss green and pink. Although she is now the executive vice president for IDSVA, she was a couture wedding-dress designer when she first met Smith. One of her dressmaker’s forms peeks out from a side room.

Smith observes that his home’s unified aesthetic is a result of his “own deliberate attempt to make sure things don’t collide.” There’s a pleasing symmetry to how the artwork is hung. Two particularly striking black-and-white photographs of girls—one by Jocelyn Lee, the other by Jack Montgomery—hang to either side of an entryway. Two family heirlooms—paintings by Edmund Quincy, a descendant of John Quincy Adams and a member of Smith’s family line—hang neatly in a corner of the front parlor.

Smith has always been interested in design. An inheritance, perhaps, from his mother, whom he describes as a “great home person,” adding that she “believed your home should be like a private garden that people could come into as they would a private sanctuary devoted to the art of conversation.”

As for his own home, he says, “Only in Maine could a collection come out of the generosity of people who live here.” Although he clearly values his many friendships, he understands the gifts from various students and artists in a larger context. “As I see it, these gifts of art were never meant for me alone; rather, they are the shared expression of a community and a way of life.”