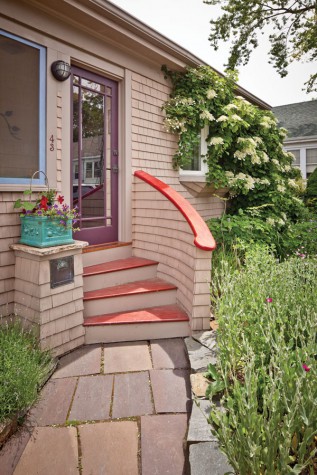 The house’s curved front entrance was designed by Michael Bush. The light and door hardware are by Decorum, and the railing was made by Ann Flannery in Topsham. 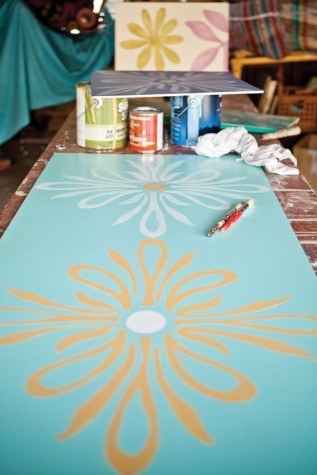 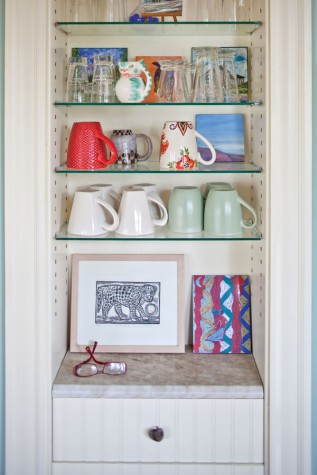 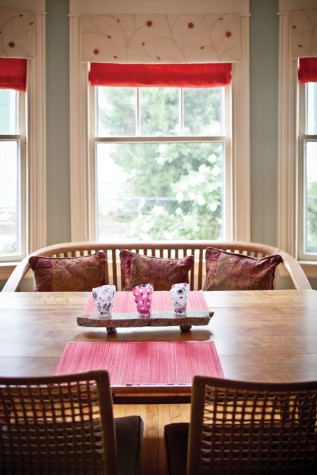 Locke made the dining room valances and shades out of fabric from her Portland friends Christine Maclin of Maclin Design and Jill McGowan Clothing. The table was purchased at Cherished Possessions in South Portland and refinished by Locke with the help of Breton. The bench is from Asia West. 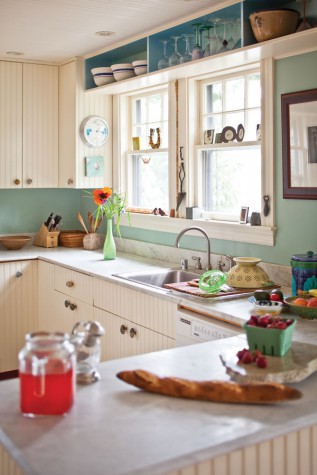 Locke gutted the kitchen, and G.M. Libby and Sons Masonry replaced the countertops with 100-year-old marble from an old movie theater in Portland. 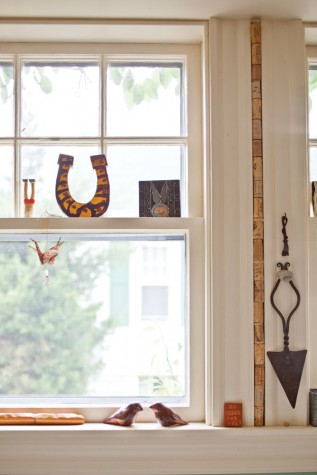 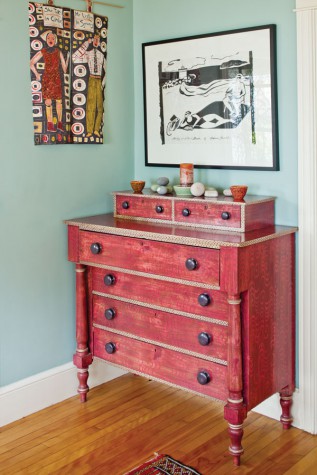 A dining room corner features a hand-colored screen print and limited edition silk-screen print by Rebecca Goodale and a bureau purchased at Polly Peter’s Antiques in Portland and hand-painted by Locke. 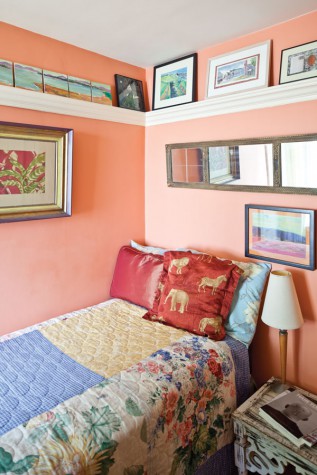 From left to right, artwork by: Locke, Marjorie Moore, Jay Rancourt, Holly Brooks, Rose Marasco, Kim McGowan, and Locke again. The quilt was made by Locke with fabric from Maclin Design. 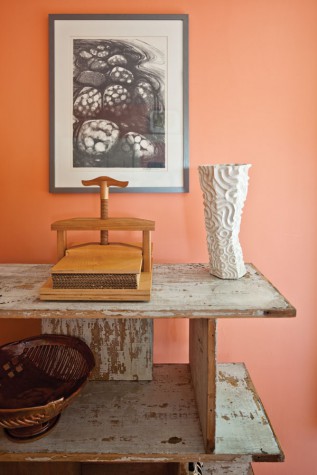 An art-filled vignette features a print by Portland artist Kim McGowan and a flower press by Harpswell woodworker and friend Lynette Breton. Homeowner Marie Locke made the bookshelf out of salvaged wood. 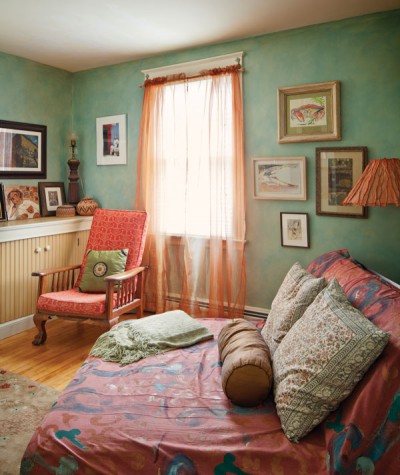 Locke color-washed the walls in the spare bedroom. The morris chair is from her grandmother, and the red cushion fabric is from Maclin Design. The futon cover was silk-screened and sewn by Portland designer James Light 22 years ago. Artworks by Nancy Montgomery, Barbara Goodbody, Rebecca Goodale, Meg Lord, and MECA students fill the room. 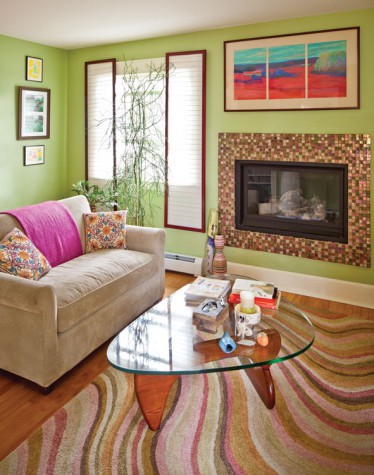 In the living room, a gas fireplace is surrounded by Mexican glass tiles from Old Port Specialty Tile. Artwork by David Caras, Flannery McAdam, and Locke is complemented by the bright green wall color. The rug is from Bradford Rugs. 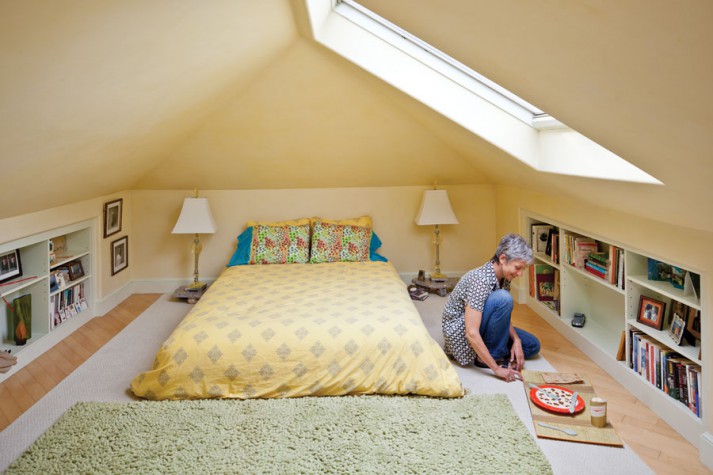 Locke transformed the unfinished upstairs into a master bedroom. 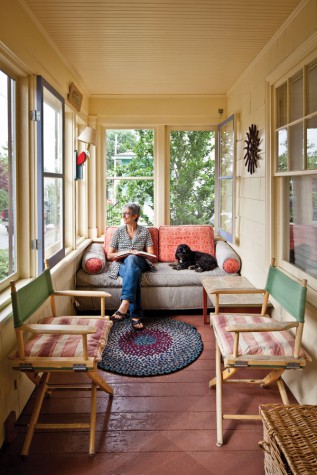 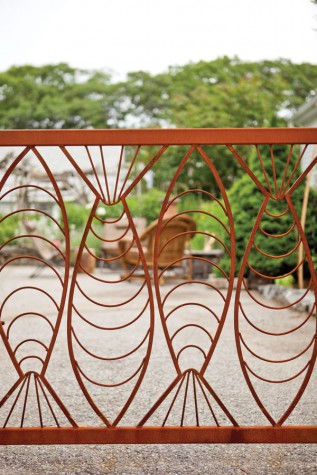 The steel fish gate was made by Locke’s boyfriend, Tony Pellegrino.

From the wall colors to the garden, an artist’s bungalow in South Portland is a medley of meaningful fragments

The vibrancy of Marie Locke’s home begins even before you step foot inside the house—in her garden. There, flowering perennials bloom all around, two espaliered pear trees grow tidily against the house, and raspberries, tomatoes, and salad greens soak up sun behind the garage.

It wasn’t always this way.

The “backyard” Locke inherited when she bought the house in 1997 was once covered in blacktop with a few scattered irises. One day she rented a jackhammer and started tearing up the tar. Then she built stonewalls. She began collecting plants from friends and started adding her own: lavender, peonies, iris, clematis, lilies, butterfly bush, evening primrose, bachelor buttons, columbine, phlox, delphinium, Russian sage. Now her garden grows as if it has always been there, her labor paying off when, every year like clockwork, her pear trees yield their fruit.

As an artist, Locke has a gift for creating meaningful spaces. For the last seven years she has operated a decorative painting business, Ralff & Sons Painted Finishes, which she began with artist Liz Moberg twenty years ago. As a result of her experience, she has had adventuresome clients and worked with talented decorators (including Christine Maclin, Carol Bass, Heidi Gerquest, and James Light) from whom she says she learned a lot. She teaches faux-painting classes in MECA’s continuing studies program, handcrafts beach-rock cabinet knobs and cheese stones (which she sells throughout New England), and organizes weeklong summer art retreats for MECA on Lower Goose Island. “I’ve been exposed to many design ideas,” she says. “It seems to be a lot easier for me to go into someone else’s home and come up with painting and design ideas. But in my own home, it was a fairly slow process.”

Locke grew up in Bangor and spent childhood summers on Little Cranberry Island. When she was 20, she came to Portland to study oceanography and moored her boat at Willard Beach in South Portland. “I loved the neighborhood and thought, even back then, that it would be a great place to live that I could actually afford that’s near the ocean.” So when she and her former husband first stumbled across the 1920s-era bungalow in South Portland, they were immediately drawn to its location as well as its size—a modest 1,600 square feet. “Since the house was in pretty rough shape—and we were going to have to do most of the work ourselves—we didn’t want a huge house to renovate,” she explains. The hardwood floors and ample natural daylight were also appealing. Not so appealing was the fact that the second floor, like that of many houses in the neighborhood, was unfinished and uninsulated.

After buying the house, the couple tackled their first big project: transforming the second floor into a single large room with built-in bookshelves and a skylight. Other to-dos were slowly but steadily checked off the list: renovating the 1970s-style bathroom, which included adding a tub they found at Portland Architectural Salvage and a marble sink top from Decorum; creating a closet in the living room with an old bank-safe door they purchased from a Greater Portland Landmarks auction; and relocating the front door and adding curved entry stairs to turn the front porch, formerly a hallway, into a usable room.

The biggest design change, though, happened in the kitchen. The pair took down a wall to open the space up to the dining and living areas. In the process, they gutted the kitchen, replacing the countertops with 100-year-old marble from an old movie theater that was housed in the Time and Temperature Building in Portland. (Locke remembers when stonemason George Libby Jr. cut the stone in the driveway with a circular saw.) Carpenter Kenny Leigh constructed the cabinet doors, and Locke crafted the knobs for the cabinets herself out of rocks she found on the beach (in fact, her business selling them is a result of friends encouraging her to make more).

Locke then used her skills as a painter to get creative with color. Except for the pale yellow in the bathroom, she mixed all the colors for the walls herself, starting with a house paint that was close to the hue she had in mind and then tinting it with artist colors. The result is a custom palette with its own set of stories: the blue-green in the kitchen and dining room (“when you look at it on a sample board it looks gray, but on the wall it’s pretty lively”) and the coral in the guest room (“I think I had a zinnia or a dahlia I wanted to match”).

“From all my years of decorative painting, I’ve gotten pretty good at predicting what a color will look like in a room,” she says. “In the beginning I didn’t have any art training, but fortunately I had a good color sense and I learned a lot from my friend Liz Moberg, whom I started the business with.”

While painting, decorating, and garden decisions were easy for Locke, it was her former husband who had the talent for remodeling and woodworking. The house had become their labor of love. In 2007, when they parted ways, Locke knew it was time for a refresh—the house was no longer “theirs” but “hers.” Locke’s friend Christopher Monahan decided that some redecorating was in order. “We didn’t buy much stuff,” Locke says, “just a couple of rugs, a coffee table, and some new pillows, but Christopher knew how to rearrange everything in a new way.” Locke’s favorite change was turning the upstairs into her bedroom. “Initially, it was a way for me to get out of my funk and spend time with my friend. He’s always been good at and enjoyed decorating. But pretty soon I realized that it wasn’t just a diversion from my divorce but a necessity if I was going to be comfortable continuing to live in the house that my former husband and I had made together.” Ever since Locke’s divorce, she’s been learning how to build and fix things herself. “My tool collection continues to grow,” she says.

By surrounding herself with items that have meaning to her—artwork made by friends, salvaged furniture and materials, her great-grandfather’s camera—Locke enjoys a deep connection to her home. “In addition to being something gratifying to look at, having the presence of my friends in my home through their artwork brings me comfort. It reminds me of times we’ve spent together, subjects they care about, their sense of humor.”

Proof that the best items in our homes are the ones with stories behind them.