Home on the Hill 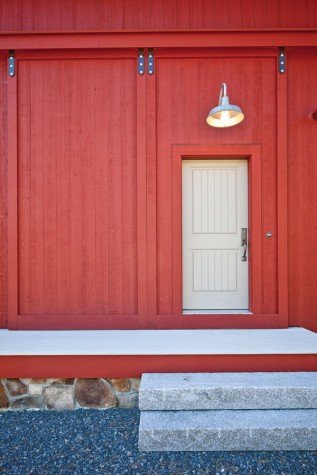 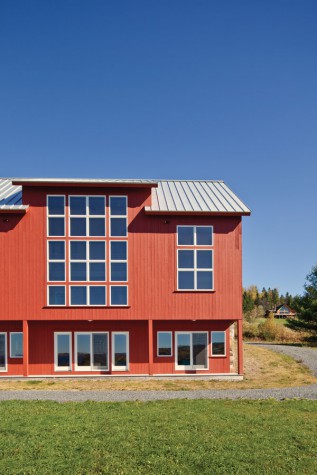 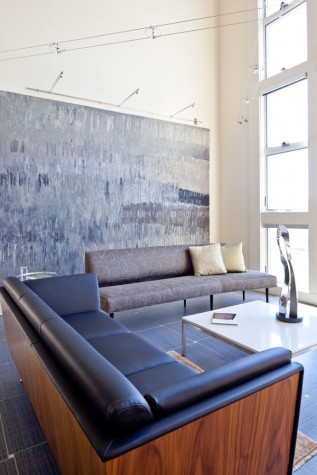 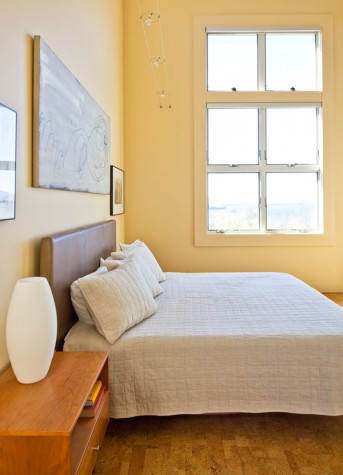 In the master bedroom, sun bathes the harvest gold walls, cork floors, and a luminous pair of slightly off square paintings by Swiss artist Nicole Schmölzer. An acrylic on canvas, Knitted Line, by Welsh-born Choi Chun Leung hangs above the bed. 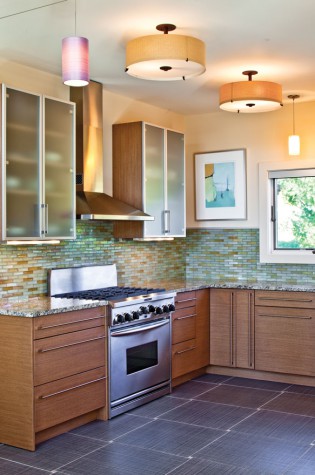 Mary Ellen Simon keeps her kitchen organized with the precision of a surgeon, she says. The glass tile backsplash echoes the colors of Rangeley Lake. 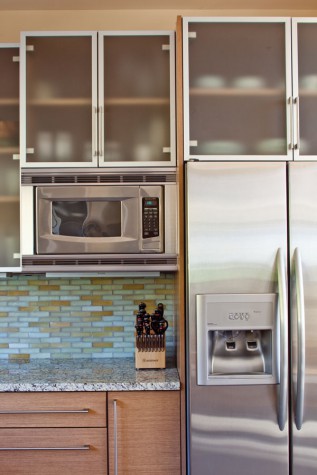 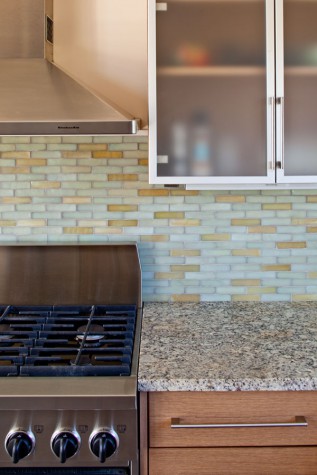 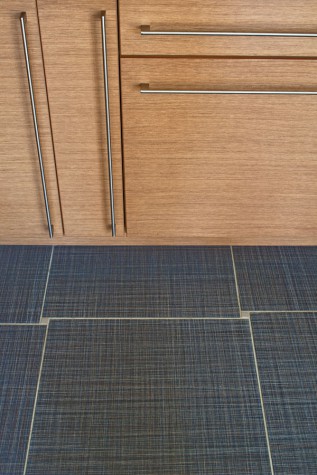 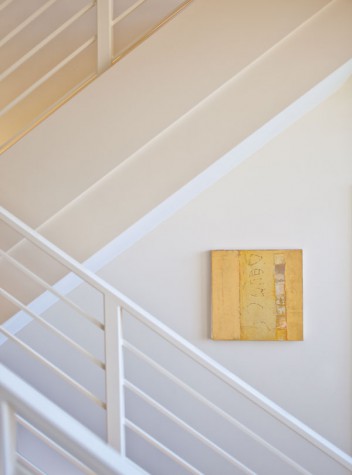 Harry and Mary Ellen Simon have shown the paintings of Marie Vickarella more than any other artist's at their modern art gallery in Morristown, New Jersey. Now, they happily hang an untitled mixed media on canvas of hers in Rangeley, too. 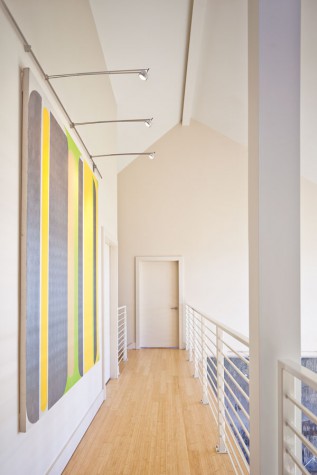 Art lives on every level. 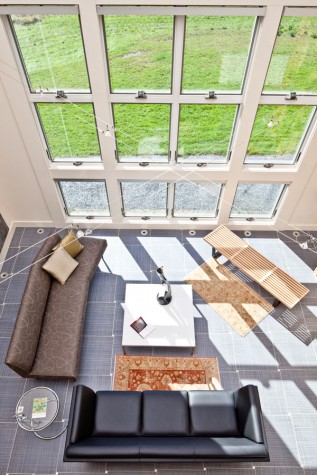 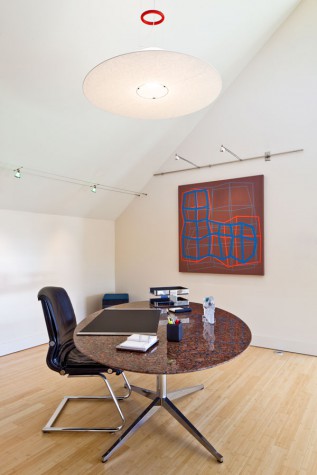 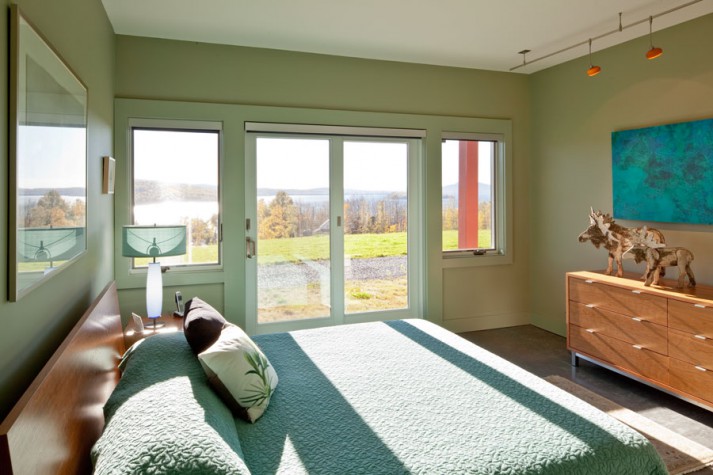 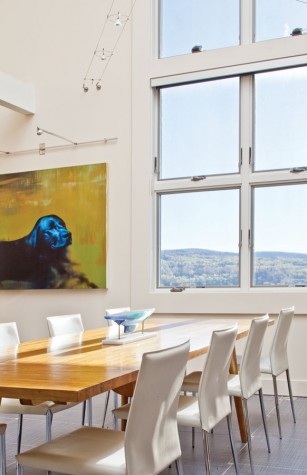 A painting of Earl by Charlie Perkalis begs for attention in the adjoining dining room. 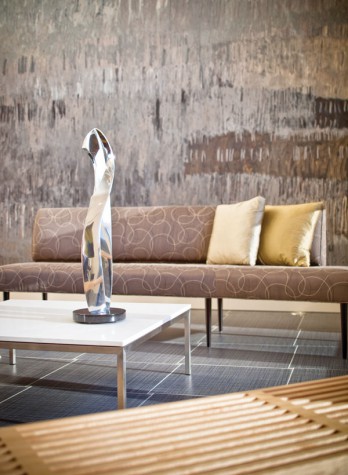 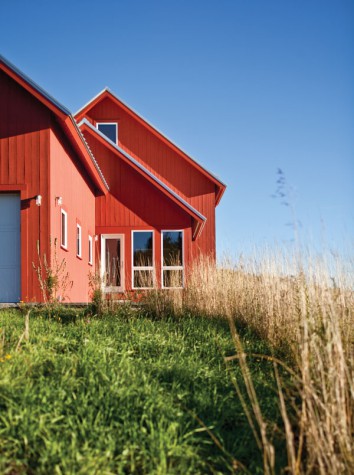 The journey that brought Harry and Mary Ellen Simon to Rangeley has been a circuitous one. From the time they met in 1989, they’ve vacationed up and down the Maine coast from Wells to Eastport. But one summer day in 1993, with a full tank of gas and no place to be, Mary Ellen drove west. When she arrived in Rangeley, that jewel of Maine’s western mountain region, she immediately called Harry and said, “This is it.”

The couple returned in 1994 and then every summer since. They spent years looking for just the right piece of land on which to build their dream vacation and retirement home. Mary Ellen could have gone for a remote setting, but Harry longed to be close to town. When they found their property just north of town in 2000, Mary Ellen remembers sitting on the tailgate of their truck astonished by what she saw.

The eight-acre parcel was part of an old, sprawling dairy farm on a meadow that rises up from Main Street and overlooks the eastern shore of Rangeley Lake. In fact, the bird’s-eye view of Bald Mountain, Maneskootuk Island, and Rangeley Lake State Park is so breathtaking that state officials were considering developing the site as a scenic overlook—until, that is, Harry petitioned them to build it down the road instead.

The Simons began construction in 2006. Harry bought an 18-foot travel trailer on eBay (it was less than 100 square feet inside). For two years, this was their home, while Christian Raymond and his crew from A-One Builders in Rangeley raised the 4,500-square-foot “barn” beside it.

It grew out of what’s just inside. On a wall in the cool and tidy mudroom hangs a painting by Harry’s childhood friend Jamie Rosenthal—the genesis for the artful life they now live. Both Harry and Mary Ellen had loved art but had no formal training in creating or curating it. But in 1996 Rosenthal’s work had inspired them to turn an unused commercial building they owned in Morristown, New Jersey, into the town’s first modern-art gallery.

“There was nothing else like it in our area, and we thought, ‘Well, why not?’” Mary Ellen says. “It really became a case of ‘if you build it, they will come.’” And so the Simon Gallery was born. Some 15 years later, the gallery shows and sells “non-objective” modern art—or art in which the only forms you might recognize are geometric shapes. Their goal is to make visitors feel comfortable living with art—every day. “We demystify the whole process. There is nothing to understand or ‘get,’” Harry says. “It’s really a matter of ‘Do you like what you’re looking at?’ And that is a completely visceral emotional reaction.”

At the same time that they were growing their gallery, building their art collection, and refining their understanding of art, Harry and Mary Ellen were also planning their future.

The couple’s plans began with Yankee Barn Homes in New Hampshire, but Harry hoped for a little more edge. So he and his best friend, architect Paul Drago of Morristown, talked for hours and dreamed up how best to build a rustic form that could house both modern art and a modern lifestyle. Over long dinners (cooked by Mary Ellen) and many martinis, the team finally settled on a simple design based on the traditional banked barn. The open building is two stories on the uphill side and grows to three on the downhill.

Subtle touches throughout the home recall its surroundings: Wood and paint echo the mottled colors of pine needles in September, and the glassy blue kitchen backsplash reflects the lake water nearby. The house’s lake-facing wall is nearly covered with spare windows that frame the expanse of sky.

Yet every creamy wall that doesn’t open up to the beautiful realism outside features abstract art inside. The screened-in porch, with its Douglas fir ceiling and south-facing windows, connects the house to the patio and the meadow beyond. In a corner stands a sculpture by Kim Barnard called Cairn. In the raku tradition, the artist buried spheres of clay, hot from the kiln, with leaves, hay, and other organic materials that impart glints of color on the cooling surface. Then, the clay “stones” were stacked (with a central support) about five feet high.

Harry’s open-air office occupies the loft, where an Ingo Maurer paper lantern floats above his desk. On the wall hangs a huge painting by Charlie Perkalis called Cash Brothers, of two boys and the words love, god, and death. Mary Ellen’s much softer retreat anchors the other end of the top floor. The room features a Schonbek chandelier and a Jonathan Shahn sculpture that’s about “process,” she says. Small, modern light shades that remind her of bagels (or lobster claws or Band-Aids) add a hint of color—ranging from coral red to cool lavender to orange—to the private rooms throughout the house.

Beside Mary Ellen’s bedside table hangs the one image she would run to rescue from a fire: Shieva Pieta’s Social Injustice. The two moody, entwined faces nearly move her to tears when she looks at it for long. In contrast, Mary Ellen loves pointing out the nearby square pop of yellow, painted by Marie Vickerilla, to visitors who are on their way to the bright ground level, which includes Mary Ellen’s massage therapy room, a pool table, and a guest suite.

And, of course, a lot more art.

In fact, the Simons have made an art of living with art. “We started going to Rangeley well before we were in the art business, and Rangeley just spoke to us as it has to many people over the years,” Harry says. “So it seems natural to marry the two things we both love.”

Over time, the couple’s long-term plan has evolved: to become art dealers in Maine and work throughout New England. They’ll use their gallery-like home as the location of an open house for the artists they represent. That way, neighbors from the community can see the kind of art they love and hear non-objective Maine artists talk about their work.

As surely as she fell in love with Rangeley, Mary Ellen is sure the locals and artists will hit it off, too.

“Our journey here has been about finding home and finding out where you really belong, as opposed to where you’re from,” says Mary Ellen, who was born in the Poconos and cherished her long visits there with family when she was growing up. “I’m not a city girl. I like a small-town sensibility, and I love feeling accountable to my neighbor.”

Rangeley is plenty neighborly. And when the Simons paddle their kayaks into Rangeley Lake for coffee and pie with friends on clear mornings, they can look up and see their bright red barn on the hill, which houses both them and their beloved collection. It’s a little bit country, a little bit modern art.