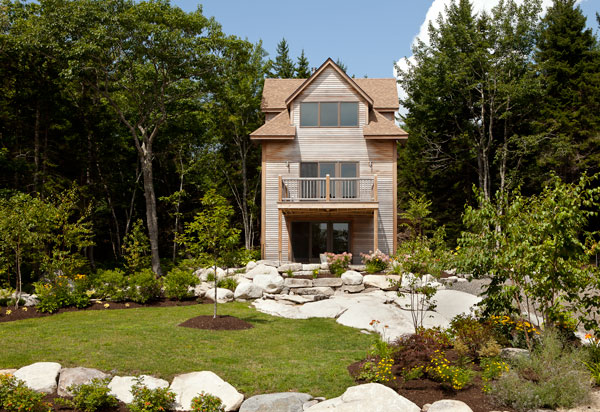 The flow of the landscape is free-form and organic. Stone pathways and steps meander from one feature (say, a patio) to the next (a firepit). 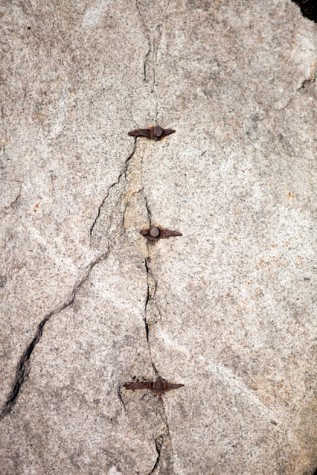 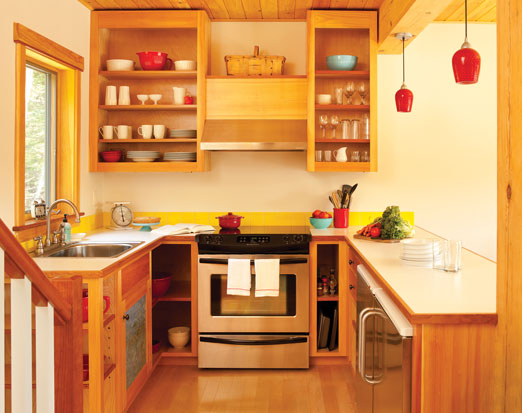 Like the cottages themselves, this kitchen is compact yet functional. 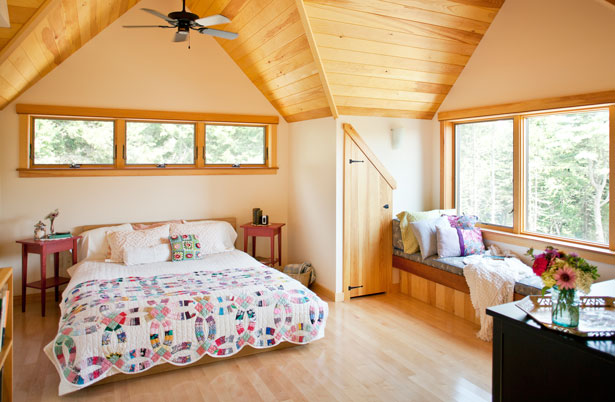 Builder James Murdock designed the built-ins in the bedrooms to be inexpensive and functional. He used stock pine for the carcass and drawer fronts and cherry tops as an accent. He then painted the panels with high-quality artist oil paints and clear coated with an oiled-based matte urethane. 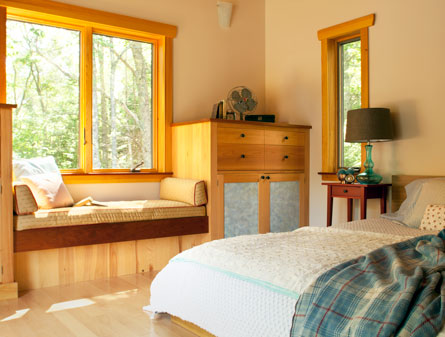 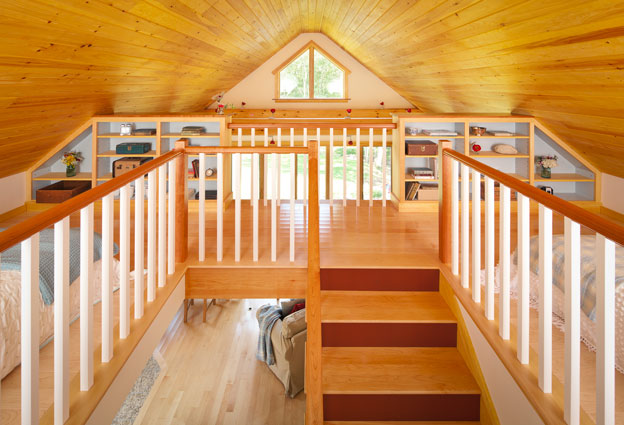 A loft offers additional beds for overnight guests. The small amount of scrap wood left over from the pine sheathing and roof became perfect kindling for the woodstove. 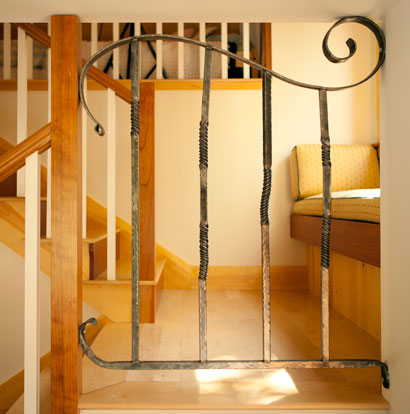 “Architect Runyon Woods let me have fun with the interior details,” says builder James Murdock. The result: sculptural steel railings both indoors and out. “The steel railing work I did was so enjoyable because the homeowners trusted my judgment,” says Murdock. “I created the look as I worked the metal; sometimes it is good not to have too much planning.”

On the site of an old quarry, two cottages rise from rocky ledge

It would not be an exaggeration to say that, on this site in Tenants Harbor, landscape designer Caleb Hall knows where each and every rock came from. Partly it’s because he hand selected each stone himself, and partly because he didn’t have to look far to find them: this particular waterfront property just so happens to be the site of an old quarry. Although he brought in a few rocks here and there (he remembers which ones, too), most of the stones in this landscape masterpiece were right under his feet all along.

Having the raw material so accessible didn’t make the project any easier, however. Excavating is hard, messy work—particularly on a sloped piece of land when you have to work through 19 straight days of rain. But Hall and his team at Hall Landscaping of Rockland started peeling away layers of earth until they struck landscape gold: a large granite ledge. “I knew this ledge was here,” says Hall, “but I had no idea how much rock would come out of it until I got down to the bottom of the exposure. The more I dug, the more interesting the site became—like I was uncovering the past.” The ledge became a key factor in much of Hall’s design. From a design standpoint, it determined many of the pathways and steps that sprinkle the site. From the homeowners’ standpoint, it was the perfect way to highlight the natural beauty of their surroundings.

The word “natural” is an oft-used adjective for homeowners Adam and Jane Stein of North Carolina. And with good reason: the Steins’ relationship with this site dates back to the 1980s, when they first found this waterfront property and decided to build. Back then, they commissioned architect Runyon Woods, whom they knew from North Carolina, to design their house at the base of the hill: a contemporary wood-clad structure that hugs the shoreline and blends with the surrounding woods.

Decades of summers passed in that house, and eventually Adam and Jane’s children had children. On the brink of outgrowing the house, three years ago the Steins decided something had to give. “We initially would go to Maine with our three children,” says Adam. “The house worked fine. Then all three got married and started having children. We now have eight grandchildren. We made modifications to the house to create more places for people to sleep, but when we were all there, it was tight.” Needing more space and privacy than the original house could afford, the Steins turned back to their trusted architect Runyon Woods. Woods’s new charge: design two compact cottages on the hill behind the original house that would accommodate visiting family and friends.

The goal for Woods and local builder James Murdock was to create two new structures that would relate not only to each other but also to the structure and aesthetics of the original house Woods designed nearly thirty years before. Rather than create identical twin structures, Woods designed two different cottages that complement each other: one cottage on a lower piece of land and a tall, tower-like cottage with a tree-house feel farther up the hill. The cottages were constructed with a pine shiplap roof and pine sheathing on the walls (the small amount of scrap wood left over became perfect kindling for the woodstove, according to Murdock), cherry interiors, and maple floors from Kennebec Wood in Oxford. Murdock’s craftsmanship went even deeper: inside the walls, the builder crafted ample built-ins for storage as well as beautiful railings that double as sculpture.

By the time Hall started work on the landscape, the two houses were already framed, and they served as a solid starting point for the site design. “I love on-site design, especially when it starts with a blank canvas like this one did,” he says. Hall and his team were able to quarry 90 percent of the rock they used on-site—flat stone, jagged-edged rocks, and ledge used as footbridges, benches, stools, and steps. “The Steins were looking for a very natural feel and some pathways between the cottages, but other than that they gave me free creative reign.”

The site today shows no signs of the rocky, untamed mess of mud, ledge, and stumps it was just years before. Hall turned the rocks and ledge into useable pieces and spaces: natural streambeds to handle drainage, meandering pathways, stone steps and patios, and even a fire pit. Grassy swaths of lawn, native plant and flower gardens, and carefully planted birch trees transformed the once uninhabitable land into functional outdoor living space. Hall chose native plants like Rosa rugosa, bayberry, white birches, lupine, and lilacs for their low-maintenance beauty. One of the biggest challenges for Hall was drainage, mainly due to the slope of the land. “This had to be a very functional, self-maintaining site,” he says. “When it comes to site design, water can be the enemy.” One of the first things Hall tackled was the creation of a dry streambed and a camouflaged catch basin using rocks he found on-site. “When it’s dry, the streambeds add visual interest; when it’s raining, they are very active and create a peaceful babbling-brook sound.”

Despite so much detail and attention paid to the site plan, the flow of the landscape is free-form and organic. A lack of formal lines allows the landscape to meander from one feature to another: an informal stone staircase flows into a more “formal” patio made out of polished stone, which fades into another casual pathway. “The site worked out well, as there was just the right space for each house,” says Murdock. The lower cottage has a short foundation set on crushed stone that blends into the uneven ledge. “This was a first for me and it works quite well,” says Murdock. Meanwhile, the “tower” cottage had just enough area for a thick slab with a natural trench in the ledge for power and plumbing. “The roof on this building was a challenge,” says Murdock. “It’s a hip roof with dormers. I was very fortunate to have an excellent framer, John Titus, on my crew who took up the challenge and did an excellent job with a very strange puzzle.”

“Puzzle” is a term that Hall uses as well when describing this project. “Envisioning edges and how everything fits together is fun,” he says. “I could almost see it even before it was there.” Despite the thirty years that elapsed between the building of the house and the new cottages, the site feels as if everything was always there. And meant to be there.