The Color of Summer 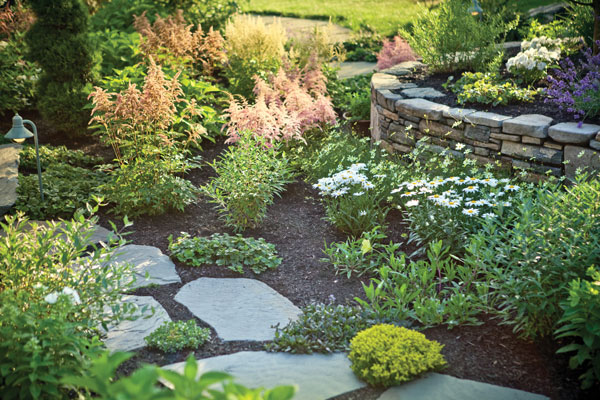 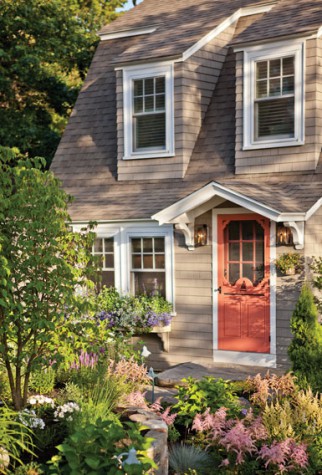 The pop of the cottage’s salmon front door hints at the bright color scheme that awaits inside. Landscape designer Ted Carter created the gardens to perfectly complement the interior color scheme. “After the salmon tones in the garden and the tiger lilies in the front, your eye goes to the door, and then as you pop inside, the colors are repeated,” explains Hurlbutt. “I always love to have the front door be coordinated with the colors inside, and it truly worked this time—bringing the outside in.” 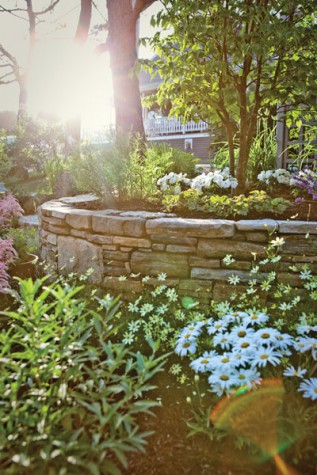 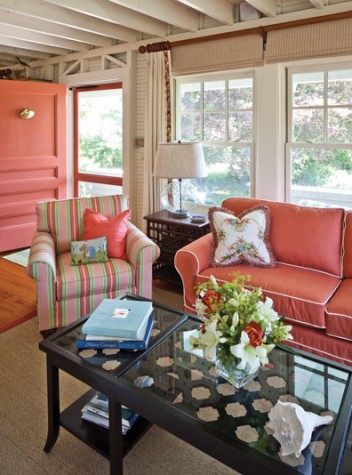 A print on a pillow in the living room served as inspiration for the rest of the color scheme. The Lee Jofa striped fabric on the upholstered chair pulls it all together, blending beautifully with a slipcovered Mitchell Gold sofa piped in white. Seeded glass ball lamps by Currey & Co. have modern linen drum shades and allow natural light to flow into the room. The Merida sisal rug has a salmon border, which adds punch. The off-white linen drapes were accented vertically with a Brunschwig & Fils plaid tassled fringe to pull the eye higher. 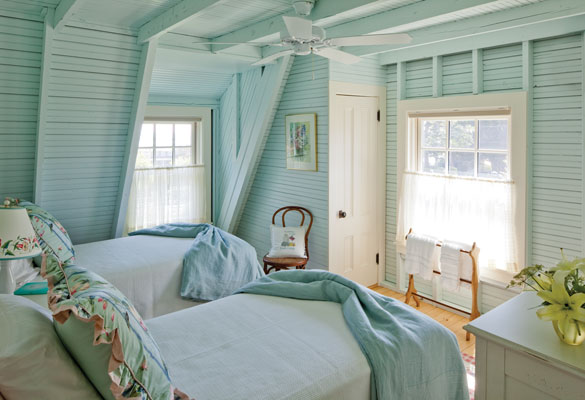 Hurlbutt gave the aqua guest bedroom new life by painting over the dark green walls and matching the color to an existing rug. Simple cottage-style embroidered sheers blow in the breeze—“like an old Andrew Wyeth painting,” she says. Ceiling fans were added for hot nights. 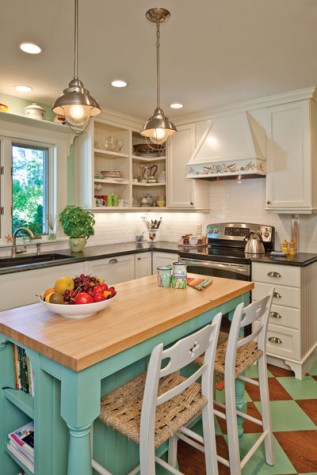 Because the homeowners enjoy cooking and entertaining, a well-designed kitchen with all the bells and whistles was paramount—and, in such a tight space, a challenge for the team. Hurlbutt’s design called for a whimsical painted checkerboard floor and a bright-green island that maximizes counter space. The countertops are antiqued and leathered green marble from Blue Rock Granite and Stone. White cabinets by Sylco Cabinetry add the illusion of more space as well. 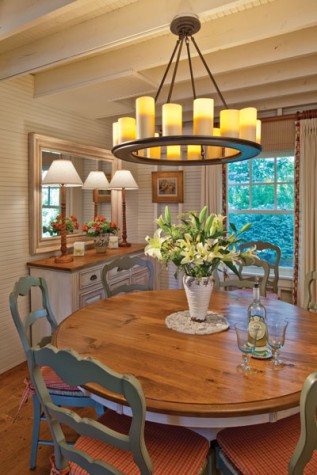 Hurlbutt and the husband designed the furnishings throughout the home, which were then handcrafted in the eastern townships of Quebec, near where the homeowners are from. 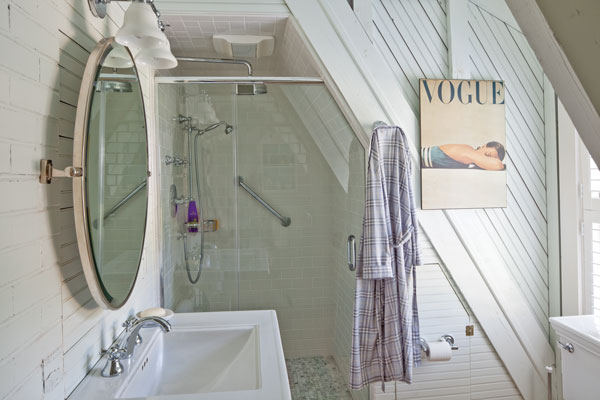 The guest bath was a struggle— “No one wanted to remove the petite Victorian claw-foot tub, but it was not functional and provided no shower,” explains Hurlbutt. The team was able to keep the vintage feel of the bathroom by using a Kohler pedestal sink and designing a shower in the eaves, which has white subway tiles and a marble hexagon-tile shower floor. 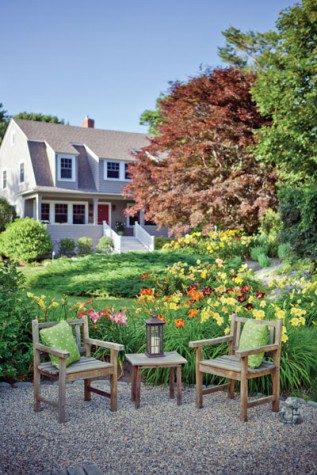 A generously sized lot (the property was once a family compound) allowed Ted Carter to run wild with his landscape design. 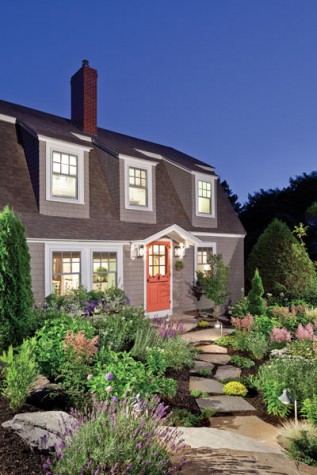 The colorful front door is from the Wooden Screen Door Company in Waldoboro.

Longtime renters of a Kennebunk cottage become its owners, turning a lifelong dream into a bright new reality

For many years, the phrase “if we lived here” hung in the air of this Kennebunk cottage, pregnant with possibility. Maine had taken its hold on the Canadian couple who rented the house every summer for two decades. (Even before that, the wife had been coming to the area since she was 12.) The house had its own hold on the couple, too, and it’s no wonder: the cottage is a historic gem filled with the kinds of stories that families pass down over generations. Its original owners got married in 1881 in front of the home’s fireplace. In the attic is a door with the height of every grandchild etched into the wood. History lives here. And with that history came opportunity.

Built in 1880, what the cottage lacks in insulation it makes up for in charm. With original beadboard walls, an uncommonly large lot for the neighborhood (leftover from its former days as a family compound), and views of the ocean beyond, the cottage was hard to leave at summer’s end. From time to time, the couple would talk wistfully with the homeowner about their hopes for the home—that it should be forever preserved, that no one should ever come in and tear it down or make a monstrosity out of it. “We were just renters though,” says the wife. “The fate of the home was not in our hands.”

That was all about to change. In 2008, the couple decided they were ready to buy a second home in Maine. They had already begun looking at properties in the area before the wife turned to her husband one day and said, “The house we really like is the one we’re in.” They called the homeowner and asked if he would consider selling the house. His answer? “Selling the house, no. Selling the house to you, yes.”

That year, the couple spent their first summer in the house as its owners. Settled into their new roles and ready to tackle a wish list that they had been cobbling together over their twenty-year courtship with the home, they brought in longtime friend and local interior designer Louise Hurlbutt of Hurlbutt Designs. Hurlbutt had lived next door for several years and knew the property well. Beyond that, she has known the homeowners for nearly fifty years—they had practically raised their children together on Kennebunk Beach. “I know them very well, which means that I know their likes and dislikes,” she says. “They love color and are very meticulous. They wanted to keep this house a summer cottage.” The homeowners also brought in local architect John Einsiedler and another neighbor, builder Ben Young of Bennett Young Construction. The team’s goal: Gut the interior, expand the master bedroom, add an upstairs bath, and redo the floors, roof, and windows, all while maintaining the cottage’s historic character—in particular, the original beadboard walls and ceiling beams.

This was no small order. The biggest challenge was making the necessary updates without disturbing the historic character of the cottage. The team started with the front of the house. “We made some subtle changes that improved the elevation,” explains Einsiedler. The design included aligning the first-floor window with the dormer above—“not a big change,” says Einsiedler, “but it made the elevation feel better.” Another challenge was getting the scale of the front doorway just right. “It didn’t call for a grand entry, just something in keeping with the cottage feel,” he says. “The existing entry seemed put on as an afterthought.”

Throughout the renovation, a major theme cropped up that informed Hurlbutt’s vision: “It started with the wife saying to me, ‘I want a happy house,’” she explains. “She did not want the traditional blue ocean theme that you so often see in Maine. She allowed me to use color like I so love to do.” Armed with a blank canvas and the trust of her clients, Hurlbutt crafted a vibrant color scheme based on a pillow in a salmon and green Thibaut seashell print that now lives on the living room sofa. “From that pillow, we pulled our colors for the paint, fabric, and rugs throughout the house. You always need one fabric or rug to start spinning everything off of,” says Hurlbutt. This bold color scheme was a far cry from the drab and dreary palette that the home had suffered for so long thanks to the original green-stained beadboard. After a couple of coats of white paint, the dark beadboard was transformed, making the small space feel light and bright, and giving Hurlbutt a neutral backdrop for her colorful fabrics. “We didn’t know how the paint would react on the original wood, but it worked well,” says one of the homeowners. In some places, Hurlbutt used less fabric, and instead splurged on the punch. “We just wanted to keep it simple and soft.”

Because the couple is in the furniture business back home in Canada, the furnishings had to be perfect. Hurlbutt collaborated with the husband to design all the pieces of hardwood furniture to exact specifications to fit their locations and the overall color scheme. In the dining room, this included topping the pieces with pine, rather than painting the wood to make the pieces look old. The custom furniture was crafted carefully in the eastern townships of Quebec, not far from where the couple lives.

As the first room you see upon entering the front door, the kitchen had to pop. But, like the rest of the house, the original kitchen was dark and cramped. Hurlbutt’s colorful kitchen design also took its cues from the living room pillow. She pulled out the same greens and accented the room with a painted checkered pattern on the old pine floors. A small center island allows husband and wife to make breakfast together and expands the counter space. For a nautical touch, Kennebunk artist Susan Amons created a trompe-l’œil of a seashell on the hood over the stove.

Perhaps the biggest challenge downstairs was creating an open floor plan—Hurlbutt’s idea. Originally, the living and dining rooms were separated by a wall with two fireplaces, one in each room. “Getting rid of that wall made all the difference,” says the wife. Now, the living and dining areas open to one another with a central fireplace that can be enjoyed from both rooms. “We had always felt those rooms needed something, but Louise really brought them to life,” says the wife.

Upstairs, the renovations continued based on the couple’s running wish list of things they wanted to change about the cottage. At the top of their list was the cramped master bedroom, which lost square footage to a second-floor sleeping porch. “We always said that, if this was our house, this would be part of our bedroom,” says the wife. The design called for incorporating the porch into the master bedroom and creating a much larger room with built-in closets. Additionally, the homeowners wanted two bathrooms upstairs. The original, lone bathroom lacked functionality with its beautiful claw-foot tub but no shower. The transformed bathroom now includes a beautiful tiled shower—a favorite of the husband’s.

Of course, in this transformed cottage, playing favorites is tough. The vibrant, airy space is indicative of summers in Kennebunk—full of life and beauty. Although the homeowners have to leave every year before the temperatures drop, they can know—with certainty now—that they will be able to return the following summer, as their beautiful gardens begin to bloom and the ocean breeze becomes fragrant. Persistence, patience, vision, and a little luck has paid off for this couple: “We finally did everything we always said we would do.”

A fresh start in a space they had so long dreamed of recreating.