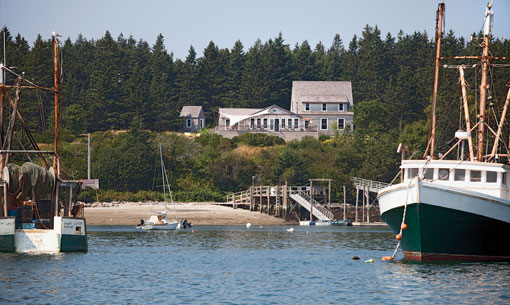 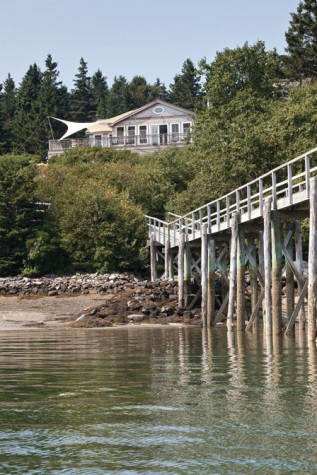 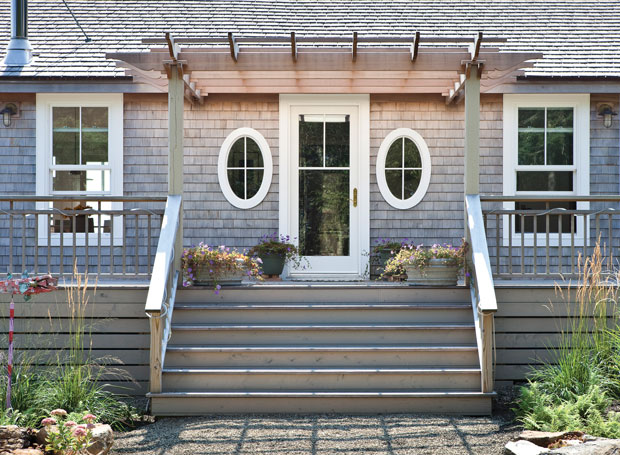 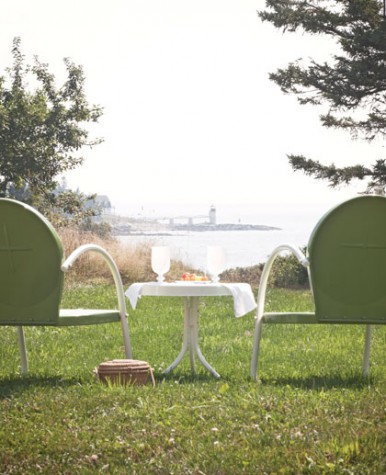 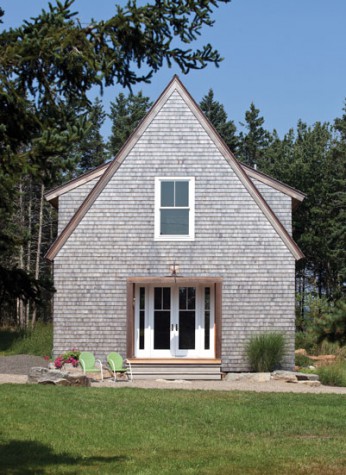 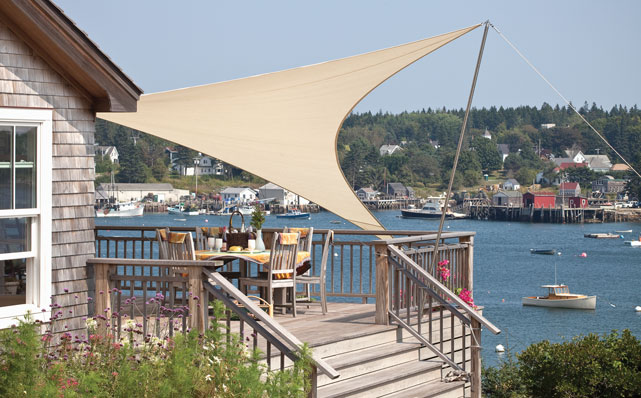 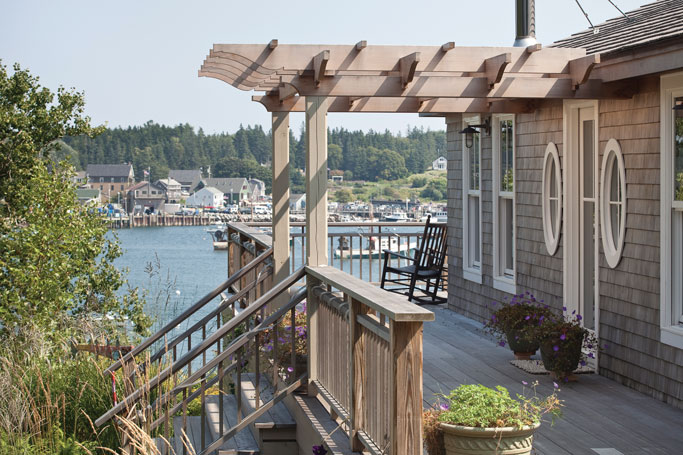 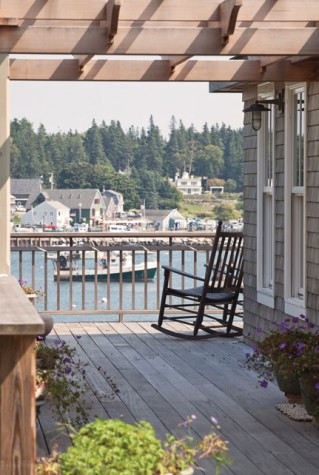 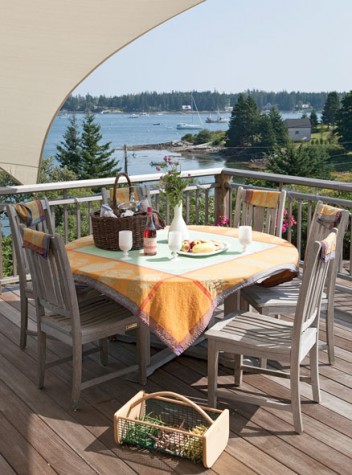 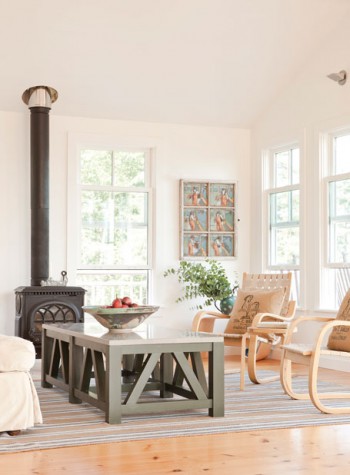 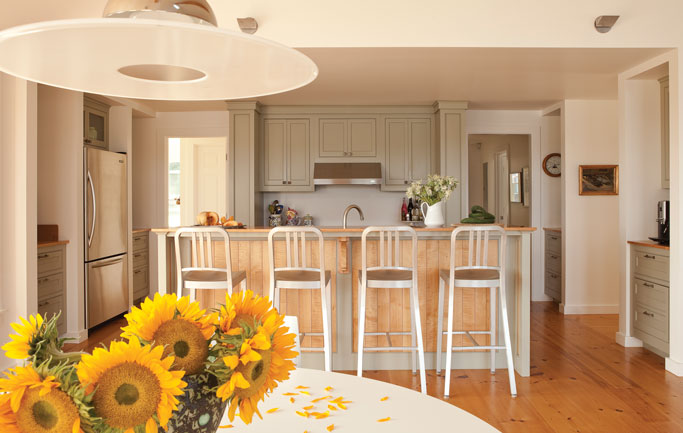 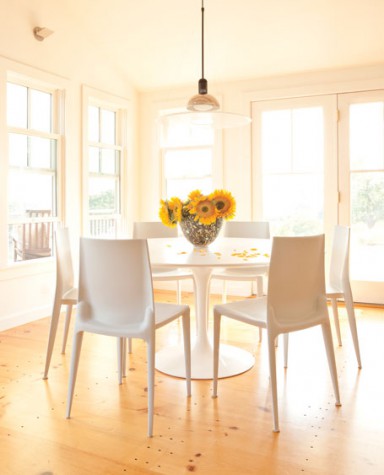 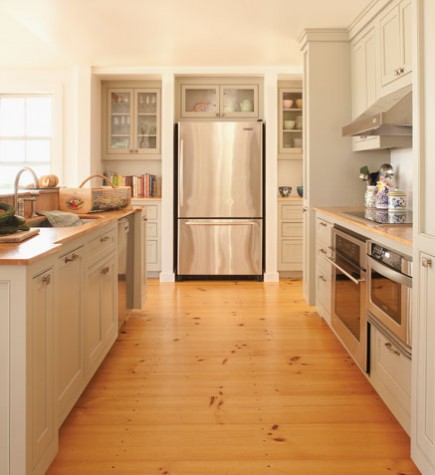 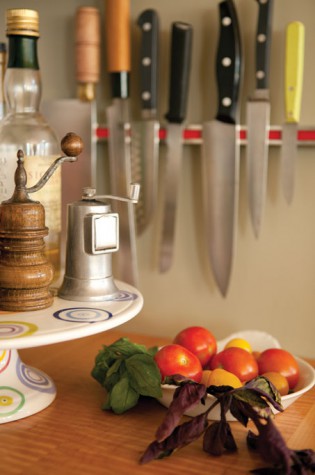 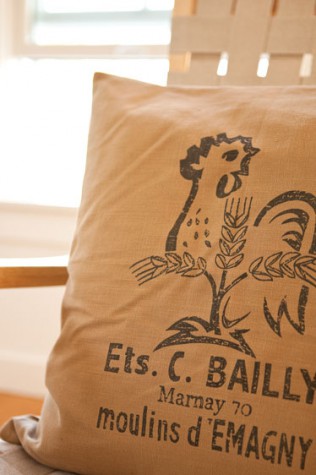 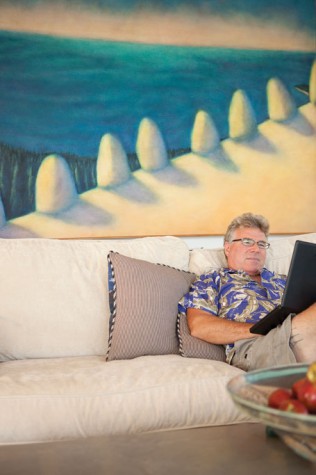 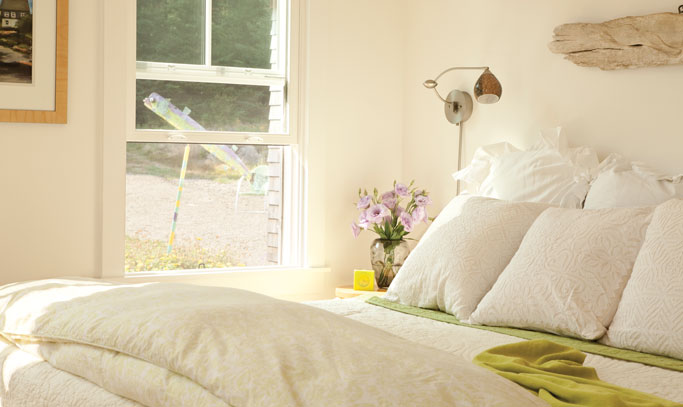 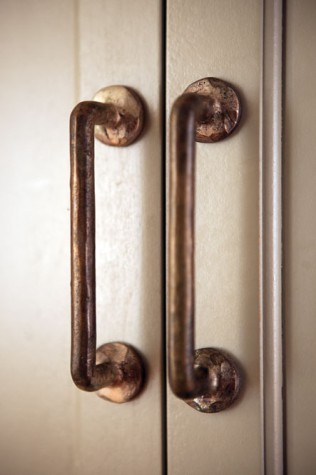 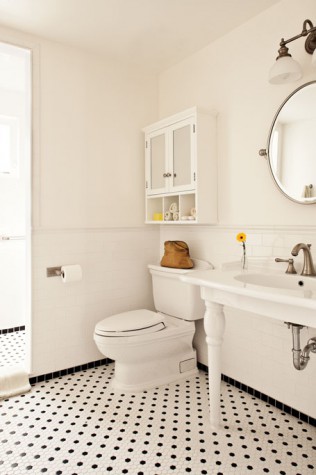 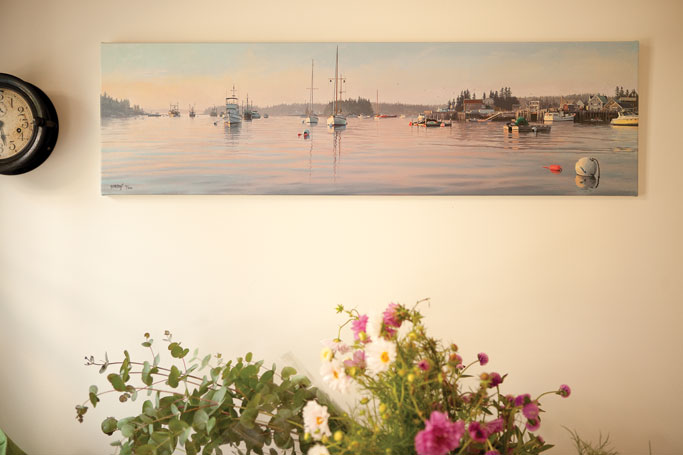 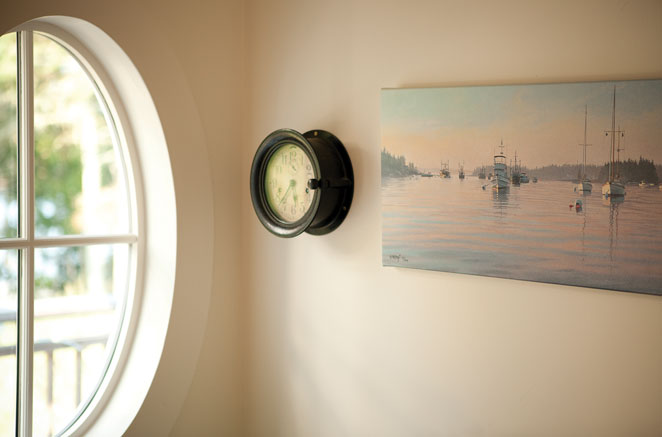 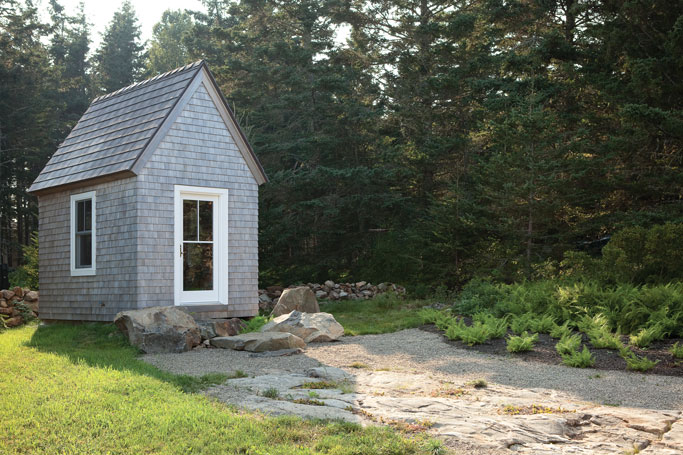 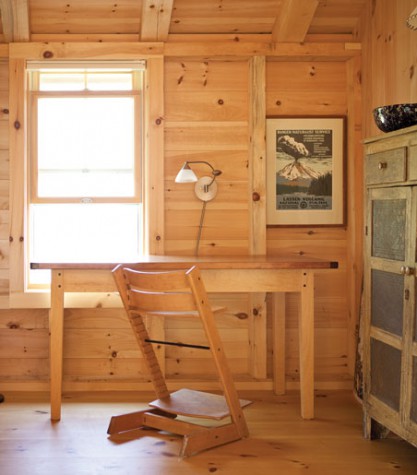 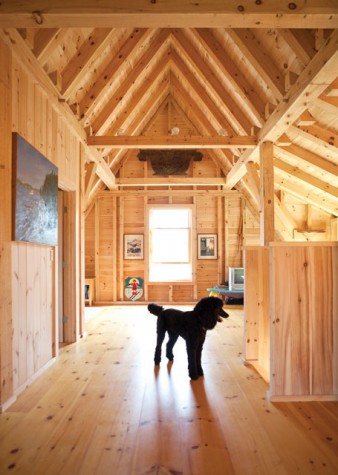 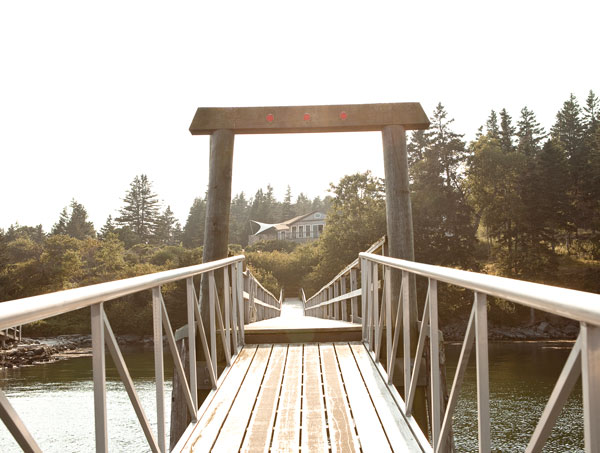 You’ll need your own boat to get to Hupper Island (there is no ferry), although you might think you can swim it from the dock at the Port Clyde General Store. Just a stone’s throw across the harbor, the 250-acre island is visually connected to the mainland—separate enough to make it feel special but not too precious; close enough so that, if you run out of milk, it’s not a half-day errand. Hupper Island is where Steve Thomas, former host of PBS’s This Old House and Planet Green’s Renovation Nation, took on his most challenging renovation project to date—his own.

First came the house itself, a dilapidated old Cape that he and his wife Evy Blum purchased in 1998 for next to nothing. The dock—an essential gateway to the world beyond—followed soon after. And then came the renovation. Over his more than thirty-year career, Thomas has learned a thing or two about home building, so when he first saw the house he didn’t kid himself. “I knew from the very start that we were going to turn a sow’s ear into a silk purse.

I knew it was going to be a fight to the finish.” Thomas has done hundreds of renovations over the years; he and his wife have worked on six houses together, including transforming their historic home in Salem, Massachusetts. Even the island setting wasn’t intimidating: Thomas is an expert sailor who spent much of his life on the ocean. How hard could a tiny little house on a near-shore island be?

Well, as it turned out, pretty hard.

The existing structure was—in Thomas’s words—“a lowly mess.” The house was perched on a hill overlooking Port Clyde Harbor and the open ocean beyond, but the low ceilings and unfavorable layout did nothing to enhance the view. When faced with the daunting task of making the home his own, Thomas fought the voice inside him urging him to tear it down and build anew. He even went so far as to look into hiring a heavy-lift helicopter so he could build a custom modular home (“It was $100,000 just for the helicopter, so…we had to forget that,” says Thomas). After studying the possibility of a larger home on the site, he decided to work within the existing dimensions to preserve the home’s character and original footprint. “It was important to honor the existing structure,” he explains. “People on the island know this house. It contributes to people’s sense of place and their connection to the island.”

Knowing he would have to gut the place while stick ing to the original footprint, Thomas took his own advice. “I always recommend to clients that they live in a house first—paint it, watch the sun rise and set, figure out where the breezes blow—before doing anything. So we basically camped here for eight years.” This gave him time to orchestrate his plan of attack. Then he had a friend over, architect Hicks Stone of the New York–based firm Stone Architecture, and from the depths of the dark living room, Stone began to draw. “In about a half hour we had a design concept,” recalls Thomas. “It was almost perfect.”

The goal was to use the design to drive functionality instead of adding square footage. “We wanted to generate as much spatial interest and aesthetic elaboration as possible,” says Stone. Drawing on his love for Maine’s traditional architecture, particularly the work of John Calvin Stevens and William R. Emerson, Stone worked closely with Thomas to design a home that, while small in size, was large in personality and mirrored the shingle-style homes in the area. The concept required crisp and simple detailing, much of which Thomas would finish himself.

With a footprint peaking at a modest 1,500 square feet, the design relied on some tricks of the trade to make the small space feel more expansive. “It was about creating an intensely designed 1,500 square feet,” says Thomas, who began with an open floor plan centered around the kitchen. (“You can’t get people out of the kitchen anyway, so why not build around it?”) The design also raised the ceiling in the living area, giving the room more height and depth. “Probably the single most ambitious move,” says Stone, “was to reframe the living room ceiling so that the Thomases could have a vaulted space rather than a simple flat ceiling. Oddly enough, the original home wasn’t planned to take advantage of the views.” Thomas also wanted to maintain some critical lines— the longitudinal axis, in particular, running the length of the house. Maintaining the lower line of windows that runs the perimeter of the living space was critical for the views. “I pushed that line as far as I possibly could, structurally,” says Thomas. Additional tricks included intensively redesigning space where it was needed most and preserving space wherever it wasn’t—in the bedrooms, for example, which in the summer months are primarily used for sleeping. “It was simply a matter of reorganizing the interior in a more logical and generous fashion, and embellishing the exterior with details that were emblematic of Maine’s traditional architecture,” says Stone.

Of course, at this point, the smart design was only on paper.

When it came time to actually start building, the house presented no shortage of logistical hurdles. The very thing Thomas loved about the island—its remoteness and sense of place—was the very thing that made building on it all the more difficult. “Logistically, it was insane,” he says. “The cost of building on an island tends to run about 30 percent more. It drives the cost up relentlessly unless everything is there and sequenced and job flow is absolutely enforced.” Thomas cut costs by running the project himself, doing much of the work on his own, and limiting the size of the team he hired to a few key members, including carpenter/builder Dana Meklin and plumber Jon Gallagher. Thomas bought an old dump truck and brought it over on the Port Clyde barge. “We almost sank that barge a couple of times. It was just unbelievable.” For certain elements of the home—the kitchen, for example—Thomas took a modular approach that took advantage of modern fabrication methods. The custom kitchen cabinetry was built by local woodworker Mark McKelvey, whom Thomas met a home show in Boston. “I said, ‘Here’s the deal: I’ll ship you all the appliances, and I want you to build everything in your shop. Set it up and make sure it all fits because we’re going to put your truck on a barge and, once it gets here, there’s no turning back.’” McKelvey prebuilt the kitchen in modules, and installation took just a couple of days.

A recurrent theme throughout the project was Thomas’s willingness to splurge on materials and good workmanship, often trading upfront costs for lower downstream costs. “I wanted the house to be as simple and easy to operate and maintain as possible, so it wouldn’t be a burden on me or my family,” he says. “Island living is complicated enough as it is.” Because of this, Thomas invested in higher quality exterior materials that would require no painting, staining, or maintenance down the road. And to further tie the home to the land, Thomas used as much local material and labor as possible. “In a remote location like this, you’re connected to the greater community through design.”

Today, when you view the shingled house from the water, it looks nothing like the original, yet like it’s been there all along. While very little of the original structure is left—save for a few walls, the roof, and the floor—what was saved is more important: the home’s imprint on its island, its sense of place, and that elusive yet tangible crown jewel: its Maine character.