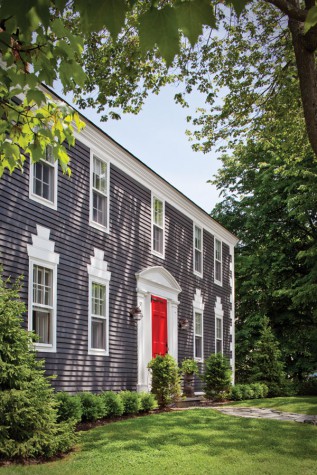 Pressly loves the antique details of her old house, including original timber framing and interior folding shutters. But she didn’t hesitate to fill it with cushy new furnishings to make it comfortable enough to want to stay awhile. 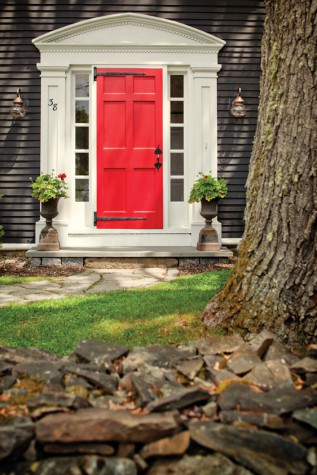 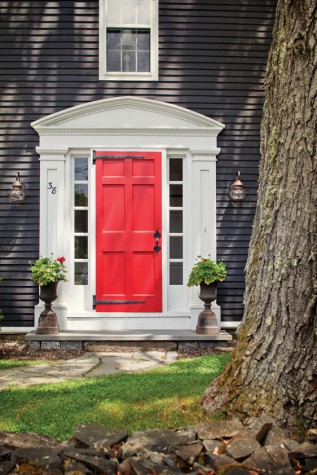 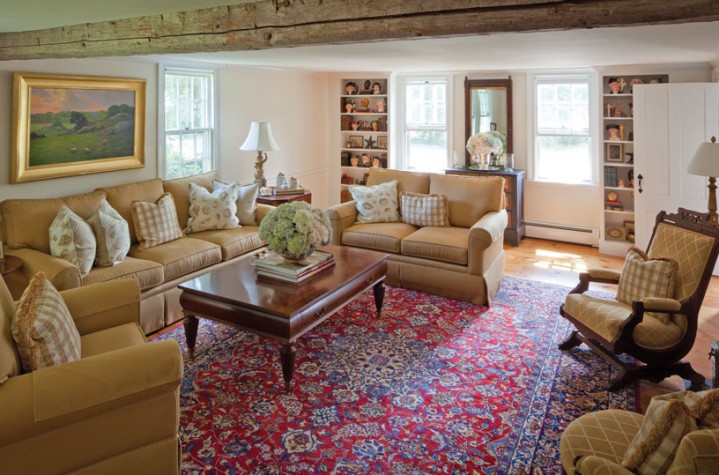 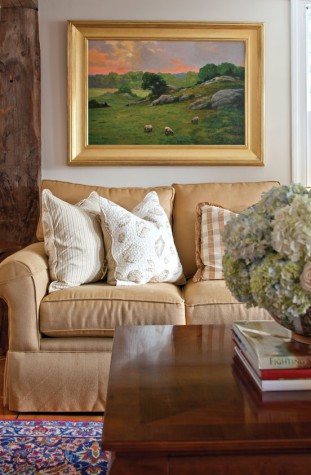 Her mother was a collector, and so is Pressly. She spent countless weekends antiquing in and around her new northern hometown to find the finishing touches that make her home shine. The painting is by Rhode Island landscape painter Harley Bartlett. 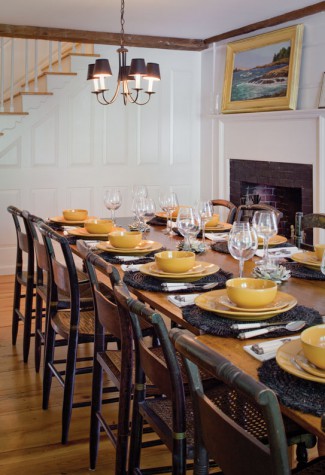 The dining room, which opens up to the kitchen, is among the most original in the house. Crisp white walls highlight its clean lines and offer a bright backdrop to nineteenth-century furnishings that wear the warm patina of age. 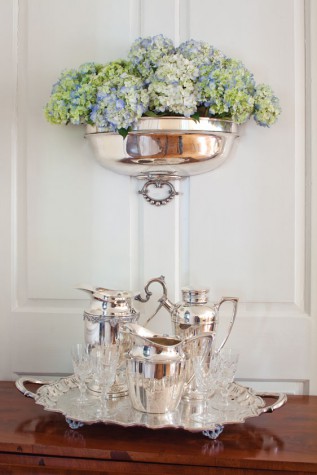 The tea set was a recent find, but the silver sconce is a creation of her mother, who cut an antique turkey cover in half to make a useful vessel for hydrangeas. 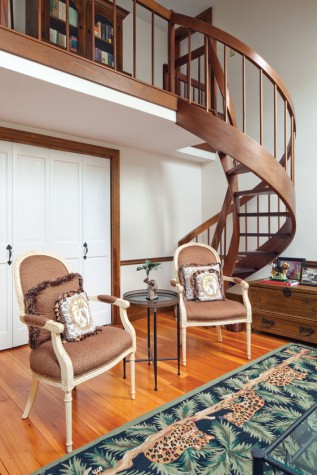 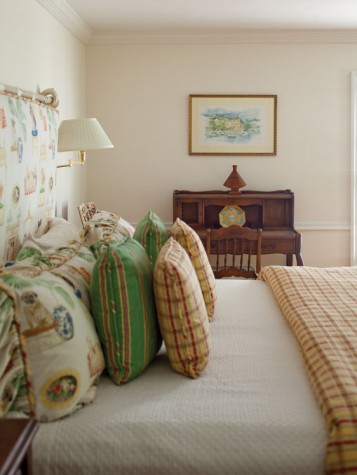 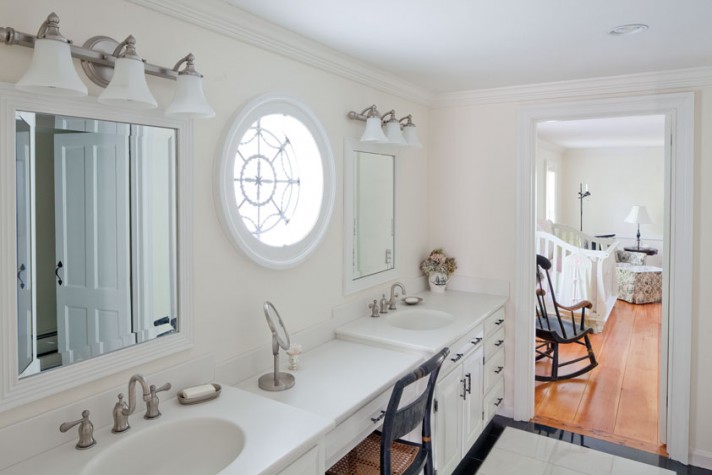 Bathrooms are now useful, not palatial. 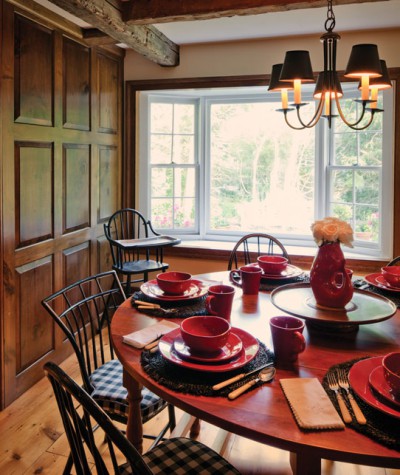 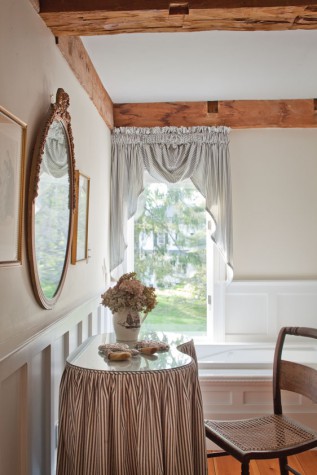 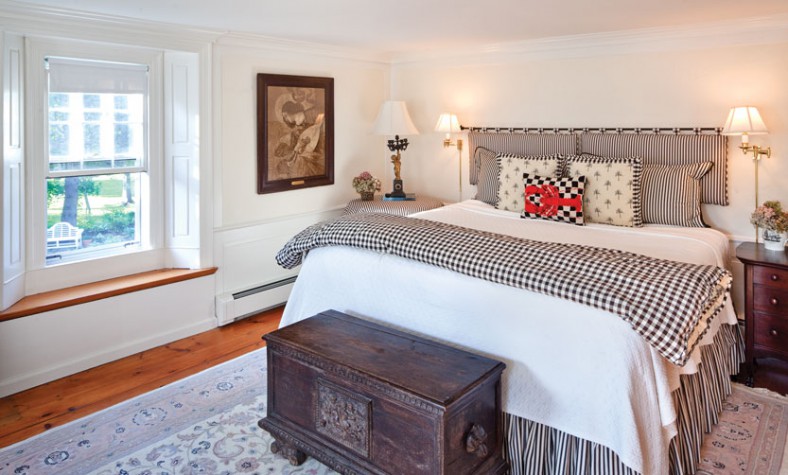 Pressly modeled the master bed’s headboard, made from a rod and two cushions, after one she saw during a visit to France. She found the nearby etching during an antiquing trip to Wells. With five bedrooms and a bunkroom, she has plenty of room for visiting children, grandchildren, and friends. 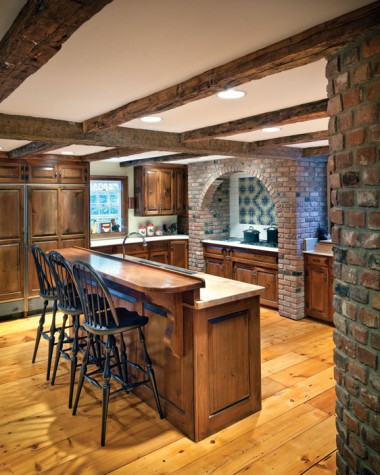 And the grand kitchen is built to share with plenty of friends and family—all at once.

When Katie Pressly discovered the vacation house of her dreams in Kennebunkport, it brought her family back to its roots. And it’s not because they are Maine natives. Pressly hails from Jacksonville, Florida, and her husband, Jamie, from White Plains, New York. The pair raised their family in Palm Beach. But in the four years since she bought the original captain’s house as a sixtieth birthday present to herself, she has never felt more at home.
Captain Daniel Walker built the Georgian Colonial home in 1784, making it one of the ten oldest houses in town. In the more than two centuries since it was built, just five families have owned it. It was last renovated—and nearly doubled in size—in 1984. “I walked into this home and felt a very warm presence, like the house had been well loved,” Pressly says. “I call it my ‘run away from home’ house. It’s been an honor to be a steward and build memories here.”
To make their many children, grandchildren, and friends all feel at home there, Pressly trusted her instincts (along with the advice of her family) and made a few careful, comfortable changes to the venerable structure. “We worked hard to maintain the house’s historical authenticity and integrity,” says Pressly’s daughter Page, a West Palm Beach interior designer who helped her mother coordinate the home’s most recent transformation. “But we also wanted to include the function and comforts of modern life for our family.”
So they took a deep breath and dove in, remembering that they had bought a home, not a museum. Pressly and her daughter began by reconfiguring the kitchen to make it easy for family members to cook for themselves and for parties to flow onto the welcoming deck they rebuilt just outside.
In some cases, it was a matter of paring the big house down. With the help of Buxton-based builder Jim Brown, they reclaimed part of the large garage and converted it into a comfortable family room off the kitchen. Page also carefully scaled back the enormous master bathroom. In its place, they carved out a smaller bathroom, closet space, and a nursery for visiting little ones.
While they were at it, the mother-daughter team turned the rambling space under the house’s eaves into the “fun floor” and added bunkrooms and space for play. Easily accessed by both a circular staircase and a nearly hidden original staircase, the grandchildren now race to the third floor when they arrive.
Throughout their renovation, the Presslys preserved original timber beams. They reused or reproduced wide-plank, pumpkin-pine floors, and they found HL door hinges to match the Colonial originals used throughout the house. “It was a wonderful architectural challenge,” Page says. “We had a great foundation to work on. You really get a sense of history, but it’s comfortable history.”
Once the new walls were in place, Pressly filled up the rooms with antiques her own mother had passed on—and then some. “I had a moving truck pick up furniture from rental properties back home, and I blended the pieces in where I could,” Pressly says. The thrill came when she began filling in the gaps. With help from friends, she took her time finding period fireplace panels, antique occasional chairs, and etchings.
In the end, everything came together easily. Pressly chose furniture and finishes that not only fit the house, but suited her. The elegant, highly functional kitchen flows around an impressive brick column. Beside it sits a circular table ringed by Windsor chairs—offering plenty of room for regular lobster dinners with friends.

The nearby dining room looks untouched by time. Guests can be seated in nineteenth-century Hitchcock chairs around two long, wooden tables for a feast beside the original cooking fireplace. Elsewhere in the home, though, modern comforts blend with Pressly’s antique finds. That blend makes the home feel firmly rooted, but never stuck in time.
The first-floor family room may be the best example of what makes this Colonial so comfortable. The built-in bookshelves and walls feature beloved collections, including her mother’s colorful Toby Jugs, Page’s European landscape paintings, and historic books, maps, and antiques that Pressly discovered on local shopping trips. After looking around, if guests sit down on the cushy sofas facing the fireplace, they’re apt to stay awhile.
The home’s generous rooms and welcoming layout practically beg for a party. In fact, local gallery owner Scott Bundy hung Maine and New England coastal scenes by Rhode Island landscape painter Harley Bartlett there last summer. About the same time, Pressly also opened her home for one of Kennebunkport’s Fine Living Festival dinners. And it was on stage again when Pressly’s daughter, Barbie Tilman, was married at St. Anne’s Episcopal Church, located on a particularly spectacular stretch of Kennebunkport’s Ocean Avenue. The rehearsal dinner spilled into the verdant back yard.
Pressly’s Northern home away from home couldn’t be much farther—or more different—from her life in the South. But it has become a haven for her family and a familiar touchstone for what matters most. When filled with care and loved ones, it seems, a home can remind its owner how to live.
“This house reminds me of what I admire about Maine—the clarity of simple and clear living. This house, like the people here, are reliable. They have good manners, and they encourage me to slow down,” Pressly says. “It’s the way I grew up as a child. And I absolutely love it.”