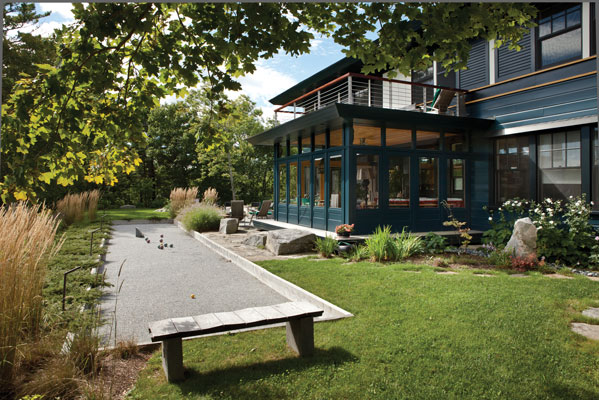 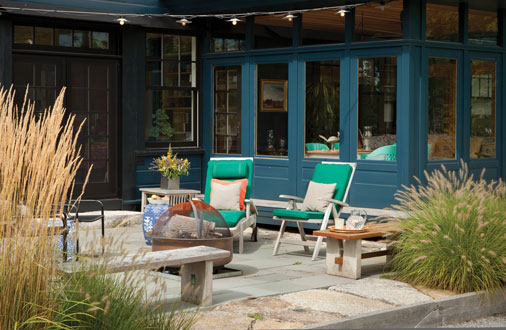 The back patio of bluestone and native granite looks over a bocce court and into the farmland beyond. Tall grasses, evergreens, blueberries, and heathers accent “the toughness of the rock and the ability of the manmade to insinuate itself into it,” says Thorne. “We didn’t want to use plantings to ‘put the parsley around the edges of the turkey.’” 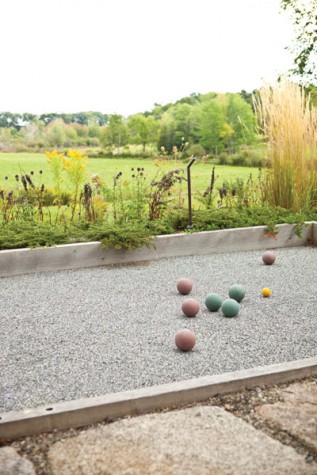 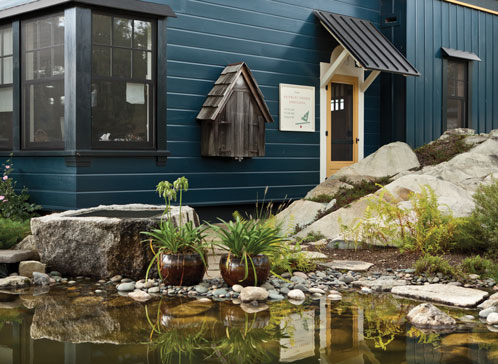 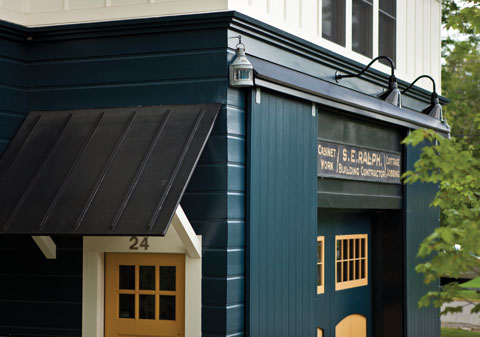 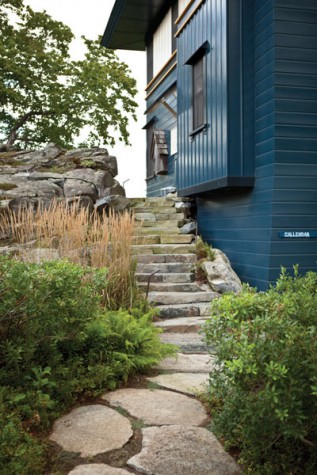 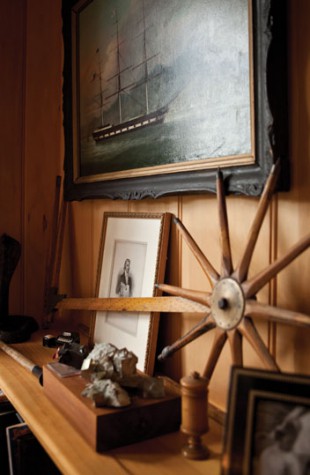 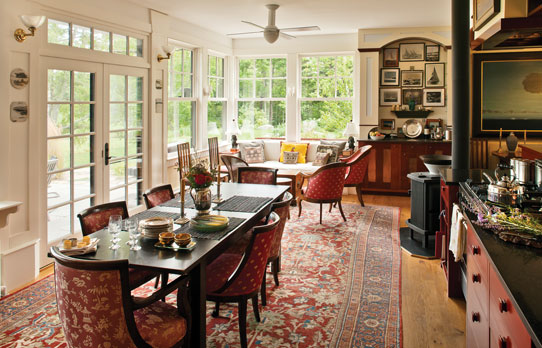 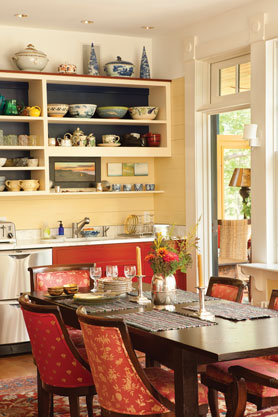 One of the house’s boldest design elements wraps the kitchen around the dining room, a move that made it necessary to equalize both rooms’ levels of quality and finish. The table had been Thorne’s office table, the chairs are reupholstered family heirlooms, and the kitchen cabinetry is custom work by Phi Home Designs (who was also the construction manager on the project), painted in rich colors inspired by the couple’s collection of Chinese pottery. The large landscape (not pictured) over the bar sink is by Scott Prior. 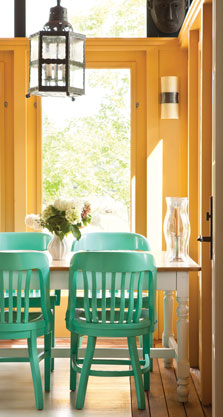 In the screened-in sunroom, the table came from Cox’s seventh-generation family summer home in Westhampton Beach, New York. The lantern used to hang at Thorne’s grandparent’s estate. The chairs are from the conference room in the couple’s old office in Northampton, Massachusetts, rescued from a lawyer’s office and painted a vibrant green. 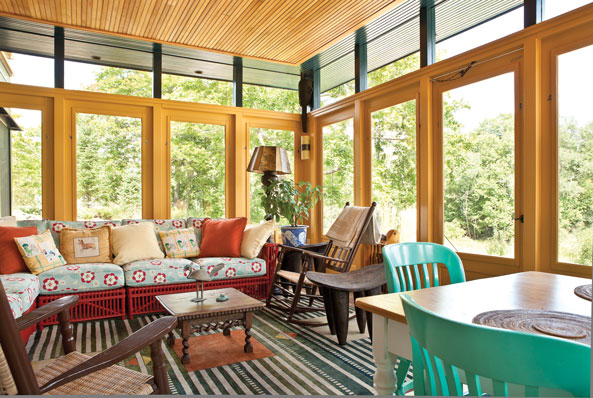 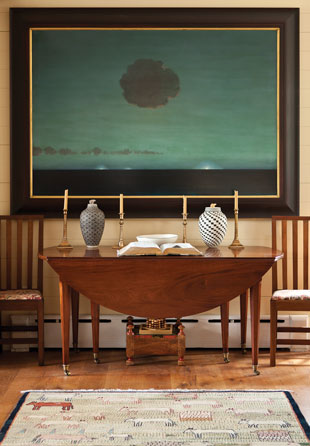 Steve Hannock’s painting of squid boats in the Gulf of Siam stands over a dropleaf table from Thorne’s grandparents’ estate in Bayshore, Long Island. The chairs were built in the factory run by Eleanor Roosevelt in Hyde Park; she and Thorne’s grandmother were friends. The rug, from India, features cows. “They’re looking out at the real cows on the farm,” says Cox. 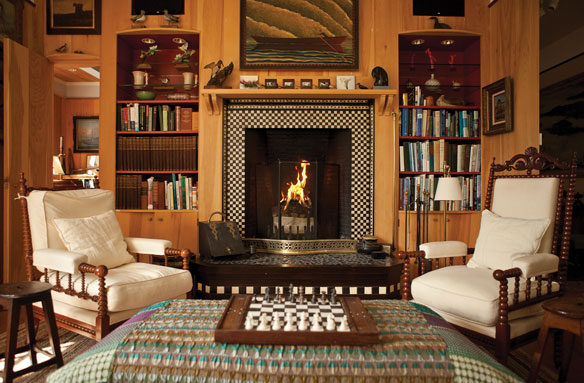 Thorne designed the living room’s Rumford-style fireplace, with a striking checker-tile surround and a raised hearth, inset with beach pebbles that is suitable for seating. Birds carved by his father grace the mantel, and Nova Scotia artist John Neville’s The Fog hangs above. The chairs came from Cox’s grandparents, through her parents, to her. Her mother always sat in the chair on the right, her father in the left one. Her father bought the chess set in North Africa during his service in World War II. 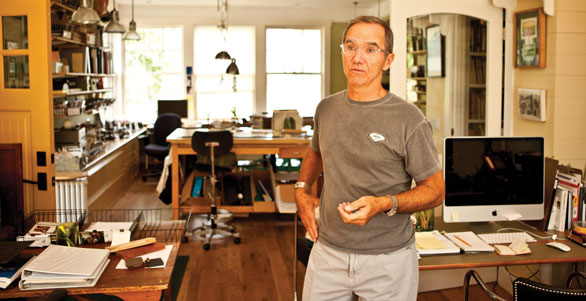 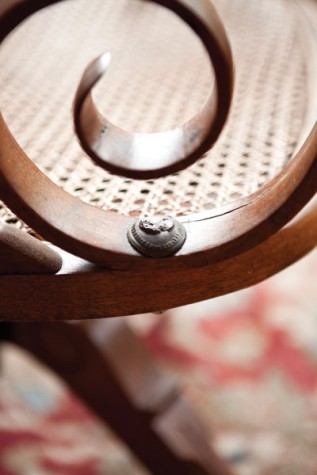 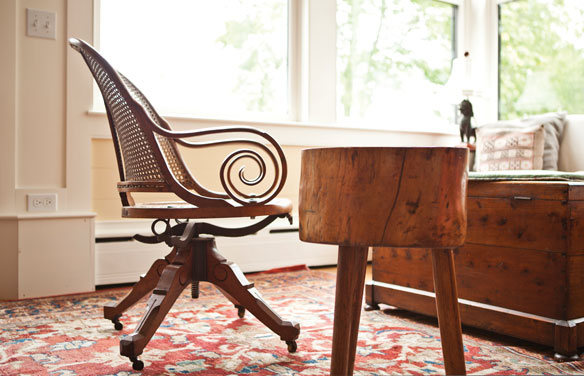 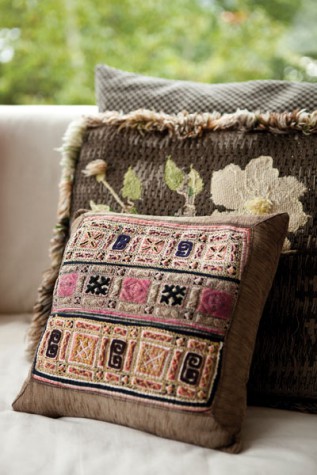 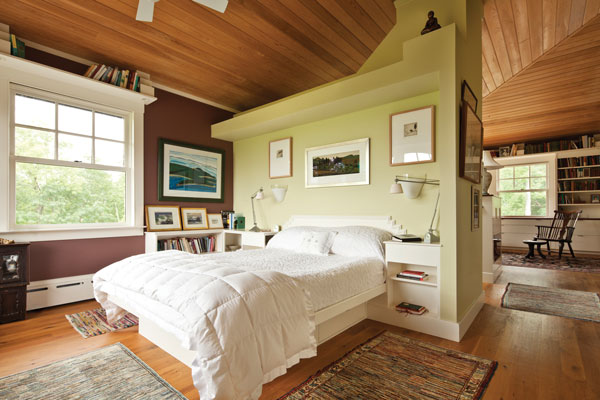 High-ceilinged and airy, the master bedroom, like every room, has cross-ventilation and an overhead fan. The white oak floors are treated with a penetrating finish made from natural vegetable oils and waxes. 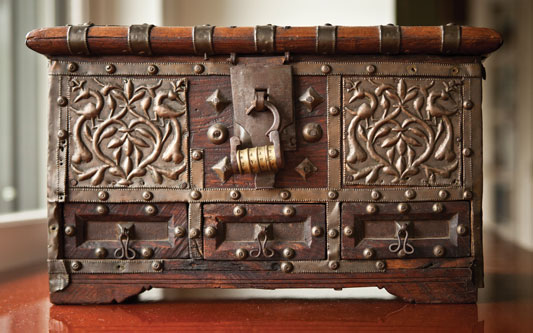 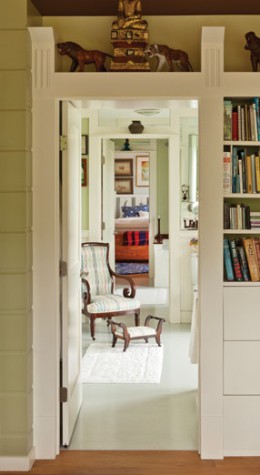 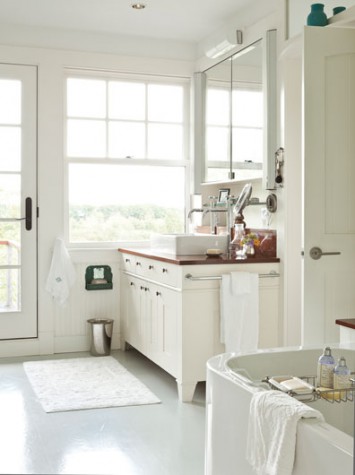 With a view across the farm, the master bathroom has a traditional painted floor and a mahogany vanity top finished in the maritime fashion, with eight coats of varnish. The bathtub is by Duravit. 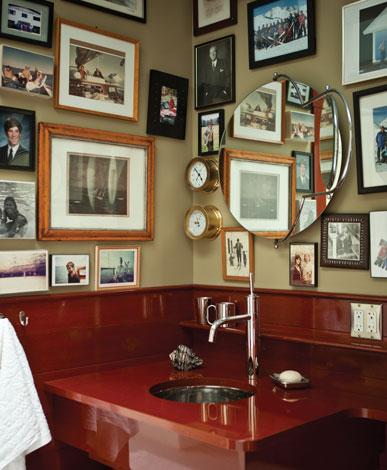 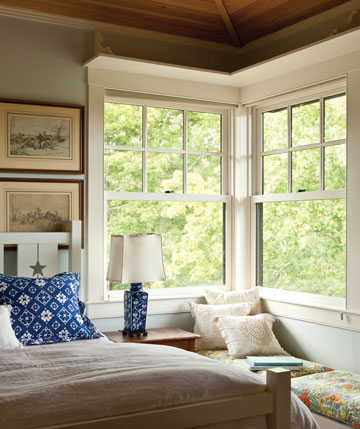 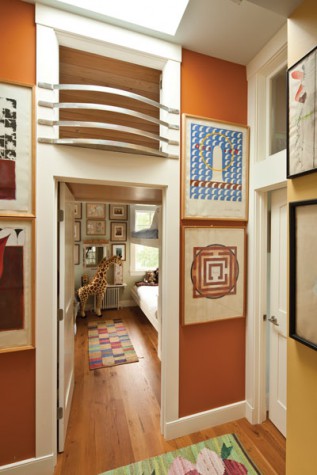 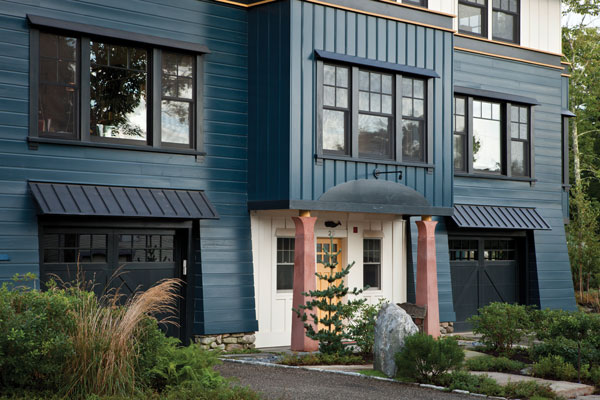 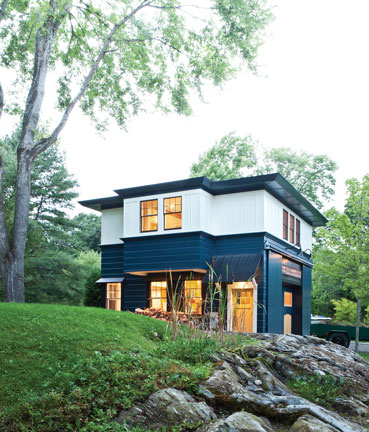 The couple’s studio, just across the street from the main house, was constructed first and served as a proving ground for various design and construction details. Cox paints on the top floor; Thorne has a workshop on the first. The exterior colors are based on Farrow & Ball’s palette: Hague Blue for the first floor, Pointing white for the top, Black Blue for the windows, and Orangery for the door. 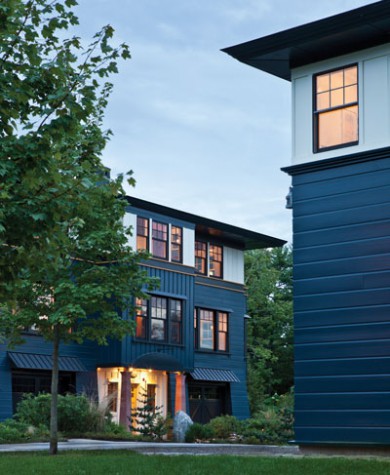 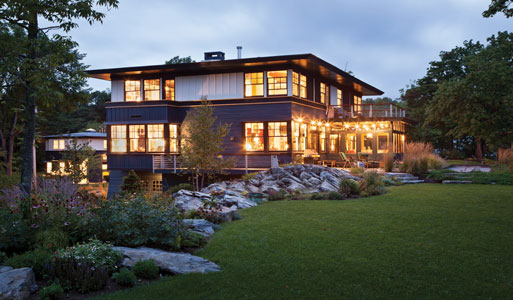 Aglow at dusk, the Thorne-Cox home sits comfortably on its rockbound site. Strong horizontals, a flat roof, and a dark-painted lower floor help the building settle into the neighborhood—on one side a residential street, on the other a working cattle farm. The broad roof overhangs provide rain protection and aid in natural ventilation by allowing the upper sashes of the bedroom windows to be left open all summer. 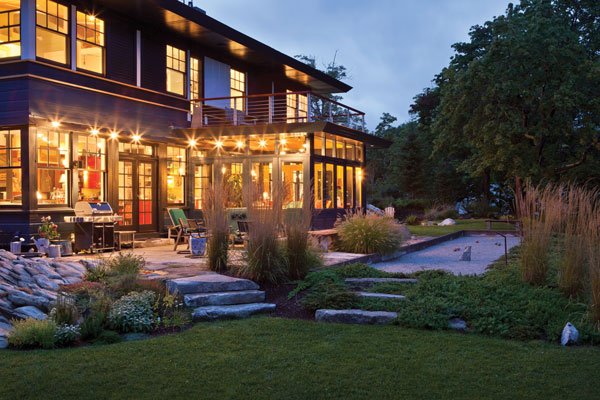 Give Mazie Cox and Brinkley Thorne a tough assignment and they are on it like white on rice. Ever since they met as architecture graduate students at Yale University in 1972, they have been pursuing a mutual adventure across the rough terrain of discovery, design, and construction.
For their first adventure, they climbed into a Land Rover and—back when it was possible (but barely) to do such a thing—drove through Afghanistan, Pakistan, and India, researching the “psychological anticipatory experience” of the region’s architecture. This was the 1970s, after all, but they learned a lot about “the experience of entering a building, and the layers one goes through to get inside,” as Thorne puts it.
When they returned to the United States, Cox worked in New York City Mayor John Lindsay’s Office of Midtown Planning. Thorne helped a client convert a former Nike missile silo in Vermont into a home. Then in 1973 they took on the more common but no-less-daunting challenge of getting married. They settled in the town of Northampton, Massachusetts, where Main Street was slated for “urban renewal,” also known as wholesale demolition.
“We believed in real downtowns, so we figured we’d better put up or shut up,” recalls Thorne. In 1977 they and Thorne’s brother and sister-in-law dug deep and purchased the nearly derelict McCallum’s Department Store building—all 66,000 square feet of it. Over the next few years, they turned the top floor into an arts center and their own architectural office, and the four floors below into retail space, including two stores run by Cox. “The idea was to have The Whole Earth Catalog in a building,” Thorne says. They called the complex Thornes Marketplace. The locals called it the “Glitter Granola Building.” It sparked a downtown renaissance.

But time went by, and as they passed age sixty, “We knew there was something else left to do,” says Cox. They were ready for their next adventure, something or somewhere to focus their passions. Their two children were grown, the vintage motor yacht they had restored was bobbing away underused on the southern Massachusetts coast, and after forty years it was time to say good-bye to Northampton. They had come to know Rockport, Maine, during coastal cruises with their kids. Taken by the potent feeling of community they had experienced there, they chose Rockport as the place to create the new “center of our lives.”
The property they saw one rainy November day in 2004 presented them with a particularly tough assignment—but they knew instantly that it was for them. On less than a quarter acre, hard by the road, stood a small house, and hard behind it was a massive outcrop of granite. “A nearly unbuildable lot,” smiles Thorne, “and therefore a lot cheaper.” On the other side of the granite was the landmark Aldermere Farm—136 acres of protected land that is home to the country’s longest-managed herd of Belted Galloway cows. “And here we were, on the highest piece of land—or rock—around,” says Thorne. “How could we take advantage of that view and not overpower the neighborhood or the farm?”
They worked on a design throughout the winter, deciding early on that the house needed to be as simple and compact as possible: a flat-topped rectangle. By adding five-foot overhangs to the roof, they gave the structure a strong terminus that decreases the mass and provides shelter from driving rains and beating sun. A much-considered exterior-color scheme—light above, dark below—keeps it from looming over the street or the farmscape. With traditional Maine touches such as double-hung six-over-one windows, standing-seam metal roofing, and board-and-batten and shiplap siding made of locally harvested white pine, the house looks both familiar and fresh. “We came to call it ‘Danish Maritime’ style—not that we know what that really means,” Thorne laughs.
Construction began in the spring of 2005 with the removal of the old house and the careful blasting of granite. Just enough rock was removed to achieve the mandated street setback and allow for a concrete slab to be poured. The house would rise out of the ground, at once part of the landscape and a bold architectural statement. Across the street, the site was flatter, and construction of the couple’s similarly styled studio went quickly—it was finished first. “We used it to work out all the details,” says Cox. The three-floor main house has 3,200 square feet of living space over an entryway flanked by garages. That entryway, with its stylized columns of tinted concrete, is a nod to Cox and Thorne’s old teacher at Yale, the great postmodernist architect Charles Moore.
The rest of the building, however, is all them. Brink laid out the floor plan, determined the elevations, and designed the trim. The flared skirt he devised addresses two problems at once. It grounds the building on the site and, by recessing the foundation walls into deep shadow, it obviates the need to dress up the raw concrete with expensive brick or a stone veneer. Cox managed the nitty-gritty of the interior, calculating “the running feet of books, the size and shape of the fry pans, the dimensions of all the heirlooms and furniture from both of our families” and designing storage for it all. “If you provide a place for something,” she says, “it will get put away.” The house holds their furniture and artwork like a glove holds a hand, with two-foot-thick interior walls designed for bookshelves and built-in cabinets and closets. Perhaps the maritime theme isn’t so fanciful after all—the place is as snug and efficient as a ship.
Yet thanks to high ceilings and glorious light flooding through the large windows, the home is decidedly unclaustrophobic. Every room has two doors. One side of the main living floor holds the couple’s offices—Thorne’s overlooks the street (“I’m more community-minded,” he jokes); Cox’s, the farm and its black and white cows. The other side features a fascinating melding of living room, dining room, and kitchen. The living room is a symphony of wood—horizontal poplar boards painted a creamy white, with fireplace walls of clear, vertical pine planking. And with Cox’s parents’ Victorian chairs flanking a crackling fire (“Mom’s is on the right, Dad’s is on the left, just like they had them,” she says), the room feels likes it’s been lived in for a long, long time. Forming the building’s corner, the dining room is graced with light from two walls of windows and French doors. The kitchen essentially makes up the dining room’s other two walls. Integrating such different spaces is never easy, but Thorne was intent on doing it. “We all live in our kitchens,” he says. “The usual route is to add on a family or dining room and divide the spaces with a peninsula with stools or something to hide the workaday kitchen. We wanted to design the kitchen up to the level of the living and dining rooms, and arranging them this way forced us to.”

The bedrooms on the third floor are airy and high-ceilinged, with sweeping views over the farm and down to the sea. In the harbor bobs the couple’s boat, which is now much used by them and much loved by Rockport’s active waterfront community—fishermen, pleasure boaters, and the tradesmen that support them. Thorne and Cox called on the expert varnishing crew at Rockport Marine to finish the mahogany pieces they had cut for the bathroom and pantry counters, the walls of their son’s bathroom, and the porch railings. The traditional marine treatment of eight coats of finish brings a luster to the wood and a tie to the area’s traditions.
Thorne and Cox knew there was something left to do after they retired, and this remarkable creation is it. What’s the next challenge? Perhaps it’s no accident that the couple built a bocce court just in back of their new house. It’s considered one of the world’s oldest competitive games, and mastering it is very tough.