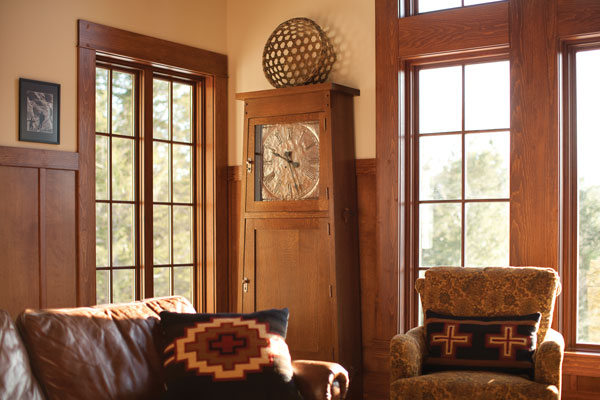 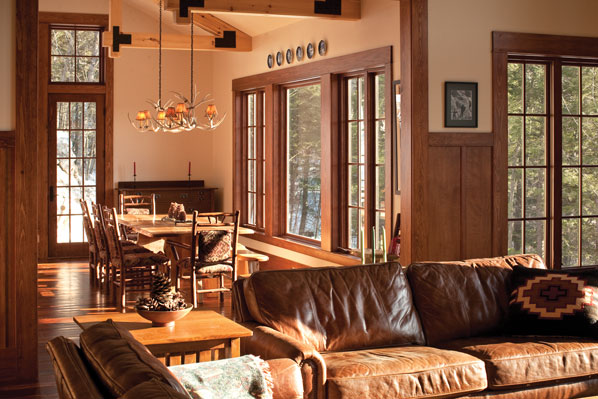 The leather couch in the foreground is from New Hampshire Interiors in Meredith, New Hampshire, where the Trudos found a number of items for their home. Donna Trudo says that she wanted to “introduce antlers” into the whole design, thus the lamps over the dining room table. 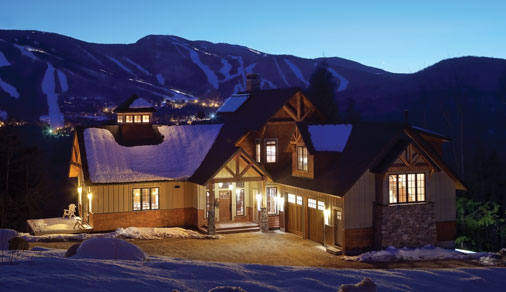 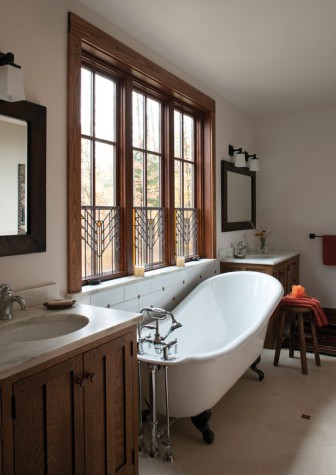 The leaded stained glass in this bathroom was made by Joseph Barberio of Rockland. The pattern was inspired by a Frank Lloyd Wright design. The amber in the glass matches amber in the floor and shower tile. 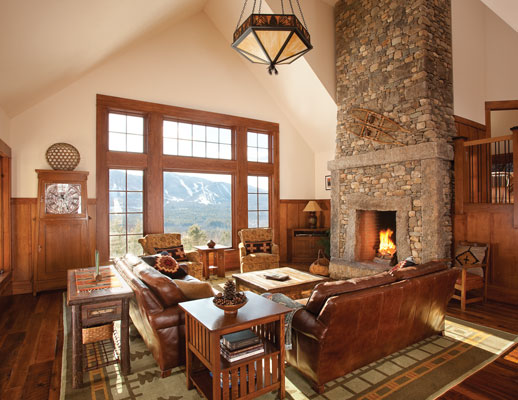 The clear views of the trails of Sunday River make this great room the family’s “strategy room,” from which they plan their day’s skiing. The room features several items from the Trudos’ collection of Stickley furniture, including a Stickley clock. Stone mason Brian Fairfield spent four months building the massive fireplace, which was inspired by Lew French’s fireplace designs. 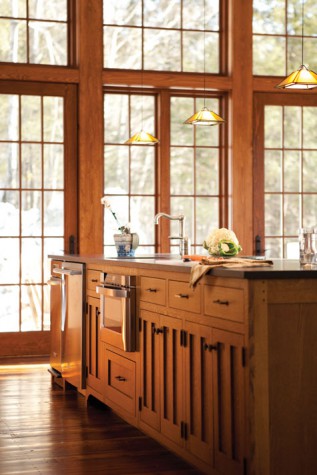 Crown Point Cabinetry in Claremont, New Hampshire, is responsible for this kitchen island. A fun detail: A microwave drawer in the center prevents the bulky appliance from taking up wall space. 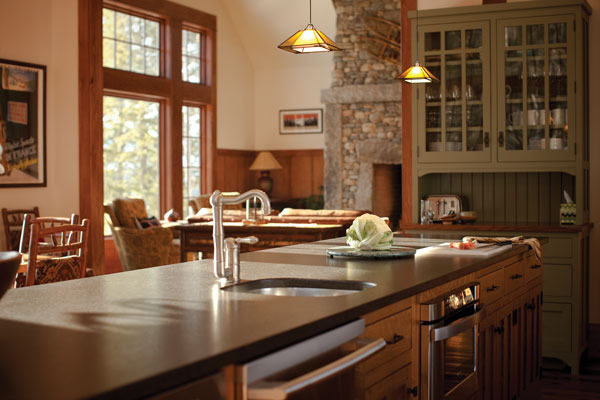 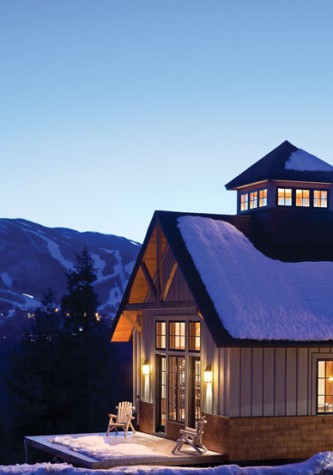 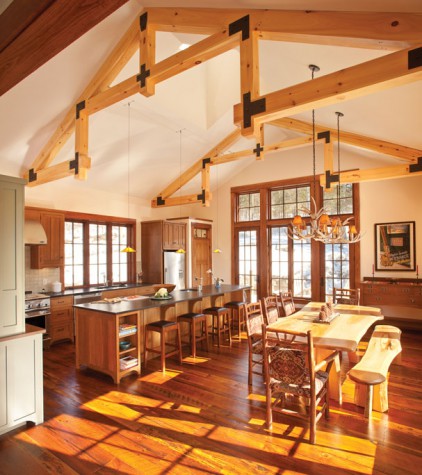 The trusses in the kitchen and dining room were designed not to block the views through the window or to the cupola that sits above this room. The furniture includes Stickley counter stools, a “live edge” dining room table by Gary Krauss of East Wilton’s Organic Furnishings by Native Woods, and dining room chairs from the Old Hickory Furniture Company.

A builder’s ski house in the mountains

Fred and Donna Trudo have skied all over the world. They have hit major slopes in Switzerland, France, Spain, Austria, Andorra, and South America. But it was on a trip in Montana—to Moonlight Basin near Big Sky—that they saw a ski house that gave them the inspiration to pursue their own dream home. They briefly considered building out West, but they wanted a place that would be accessible to their five children and ten grandchildren. Because their family is largely located in Maine, it made more sense to build near the Sunday River ski resort. The lot they eventually purchased in Newry is just a hundred miles from Kennebunkport, where the Trudos were also busy building. But not for themselves. They were building second homes under the name Shoreline Builders, the company they have owned and operated with their son Jonathan since 1989. In recent years, daughters Alyse and Emily have also joined the business.
“They will truly build the house of your dreams,” says interior designer Pat Fortunato, of Fortunato Inc. in Old Orchard Beach. She helped with the interior design of the new home. “Even if you don’t know what that is, they draw it out of you.”

As for the home of their dreams? From the start, the Trudos knew they wanted to mix Arts and Crafts style with mission furniture and a rustic aesthetic. But they didn’t want an overabundance of the latter. “I’m not too into little bears and little deer all over the house,” Donna jokes. “I have a few little pinecones around, but I hope I did it tastefully.” Donna and Fred also wanted an environmentally sound house that would function equally well for two people and for big family gatherings.

They not only wanted all this, but they wanted to do it themselves. Which is to say, the home was going to be a family affair. Jonathan would frame the house with a crew from Shoreline Builders. Fred and the crew would then complete the siding and exterior trim. Fred and Warren Tibbetts, a carpenter who has been with Shoreline Builders for three years, would do the finish work.

The Trudos chose to do the design with friends and frequent collaborators, Peterson Design Group based in Kennebunk and Portland. The firm created an original, custom design for the site, crafted specifically for the Trudos’ needs. The Newry lot was steep, and the designers faced the challenge of accommodating the pitch of the land while orienting the house as much as possible to the property’s dramatic views of the Sunday River ski slopes. (On winter nights, the glittering trail lights now fill the backyard-facing windows.) The result was a 4,500-square-foot house that looks comfortably sized on the approach but actually extends three stories down the slope and includes six levels, five bedrooms, an apartment over the garage, and a substantial, two-story combination great room and dining room with a vaulted ceiling and large windows.

The Trudos drew from Shoreline’s extensive list of collaborators to finish other elements of the house. They asked Crown Point Cabinetry in Claremont, New Hampshire, to build the cabinetry in the kitchen and other parts of the house. At Morningstar Stone and Tile in Topsham, they selected honed African ivory granite and rain forest granite to top their bathroom vanities. They found the tile for their bathrooms and kitchen backsplash at Old Port Specialty Tile in Portland with the help of Brady-Anne Cushing. One day, Fred pulled up to the yard of Brian Fairfield, a stonemason who had worked on many Shoreline homes, and asked him if he could build the chimney. One of the couple’s sons-in-law, a distributor for Classic Post and Beam in Arundel, designed the exposed trusses in the dining room.

Many features of the design drew on knowledge gleaned during the twenty-three years that the Trudos spent building homes in Connecticut and Vermont, before they came to Maine and started Shoreline Builders. Fred points out things that a casual visitor might not notice, such as how he and Jonathan sized the window trim so it is wider around wide windows and narrower around others. Or how he placed all the electrical sockets in the extra-wide baseboards. Or even how the staircase is four feet wide instead of the traditional thirty-six or forty-two inches, to match the larger dimensions of the house.

More immediately registered aspects of the Trudos’ craft are evident throughout the house. Everything is put together masterfully: the reclaimed barn-board floors in the great room, the oak floors throughout the home, and the exterior’s cedar shingles, trussed gables, and board-and-batten siding. Even small details impress, as with the staircase’s newels, which are topped with three pieces of oak: one painted black, another stained, and another urethaned. Fred laughs when he points this out; it’s just one of the many items in the house that Donna chose—or in this case, designed—and Fred figured out by trying several different versions.

What’s hidden away is no less impressive. The home is well insulated with spray foam, which Fred says is “the number one ingredient in saving energy.” There is radiant heat under the floors, and a geothermal heating and cooling system that circulates water from the property’s 1,500-foot well. The solar vacuum tubes on the roof supply hot water and supplement the geothermal system in winter.

Donna Trudo is responsible for much of the home’s interior design. The couple collect Stickley pieces, and the home has Stickley chairs, side tables, counter stools, and even a large Stickley clock. For the cabin look, the Trudos purchased “live edge” furniture, which leaves the natural edge of the wood intact. (In the recreation room downstairs, Fred also used live-edge planks to finish the walls.) The rustic theme was extended with pieces from Old Hickory Furniture Company, including a coffee table, dining room chairs, and bed frames. Even more rustic pieces—three rough-hewn, cedar-log bunk beds—are in a downstairs bunk room meant for the grandchildren.

In outfitting the home, Donna found a number of items on the Internet and came up with some real surprises. The Meyda light that hangs in the great room came from bedbathstore.com, a site she wouldn’t ordinarily visit to look for a light fixture, but she reports that she got the item for $1,000 less than if she had purchased it from a major lighting company.

“Black,” Donna points out, “is part of the mission look,” so black is used as a punctuation mark throughout the house, in the leathered black pearl granite on the kitchen island, the black of the stair balusters and newels, the black of the doors’ hardware, and even the black of the steel plates that one of Fred’s brothers, Thomas, put on the dining room trusses and the great room’s pine posts.

Donna and Fred didn’t go it entirely alone, however, when it came to the interior design. “Fred and I have been married for forty-four years,” Donna says. “Our brains function together automatically, and we needed a different opinion about things we thought we would like.” Fortunato helped the couple establish the home’s basic colors—Sherman-Williams Divine White and Benjamin Moore Nantucket Gray—and select tile and other finishes. The Trudos appreciate that Fortunato goes “a level deeper than other designers,” paying particular attention to architectural detail. She worked on the home’s lighting and space plan, as well as exterior elements such as the outside lights and the dimensions of the stone pillars framing the front door.

One of the home’s fun details is its ski entryway. To the right of the front door is a grate where family members can knock snow off their boots before they step into a room outfitted with hooks for ski jackets and cubbies for helmets and gloves. The garage is a surprise, too, with multiple custom racks built by Fred for skis, snowboards, snowshoes, and snow boots. It might be a sports store. There’s so much gear to accommodate.

The Trudos began building their home in 2007. When they try to fix the date on which they finished the home, they can’t agree. Finally, they both assent to Donna’s conclusion that a home is never finished. After all, Fred is still building furniture for the downstairs recreation room, and there’s always tweaking to be done, especially if you are the tweaker. “This is,” says Donna, “a builder’s house for sure.”