One with the Land 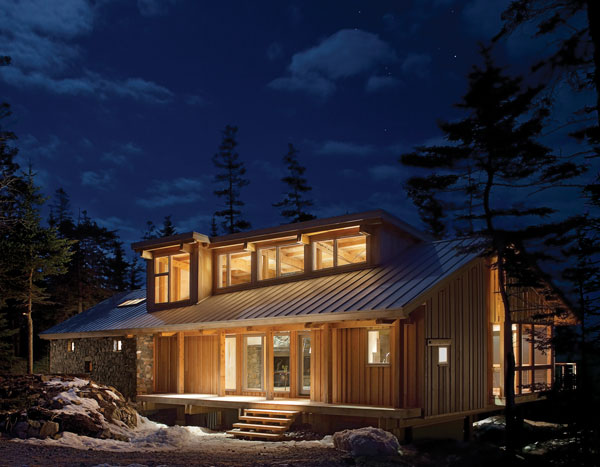 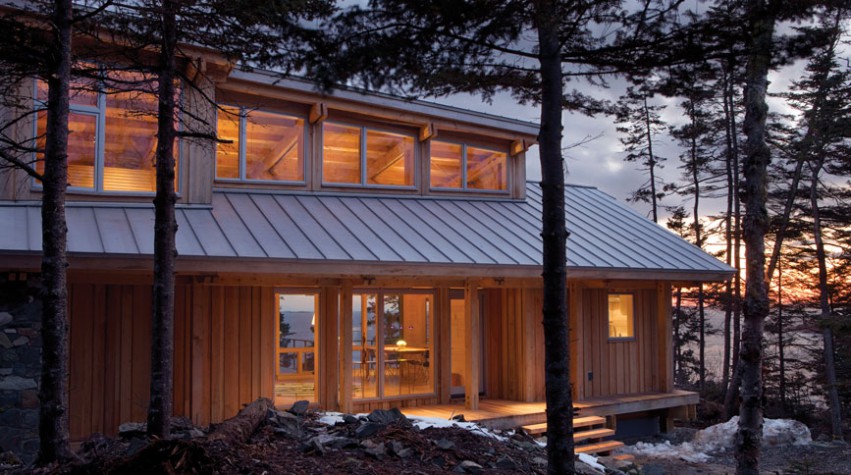 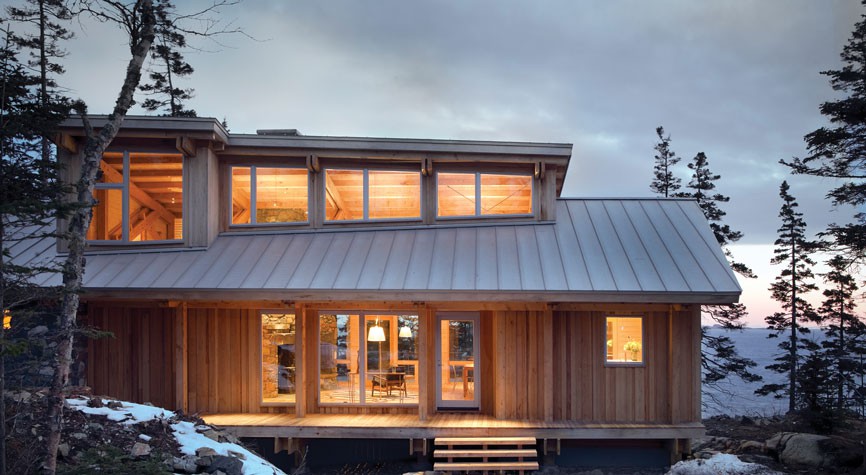 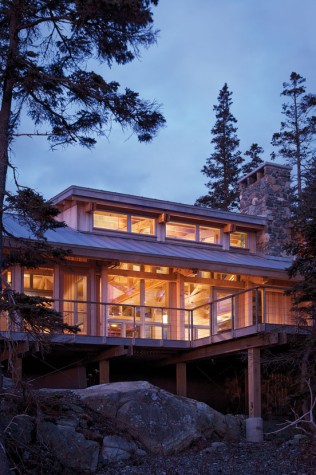 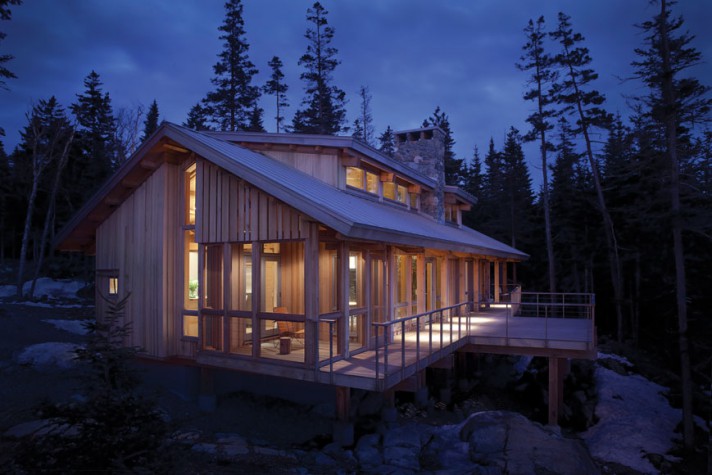 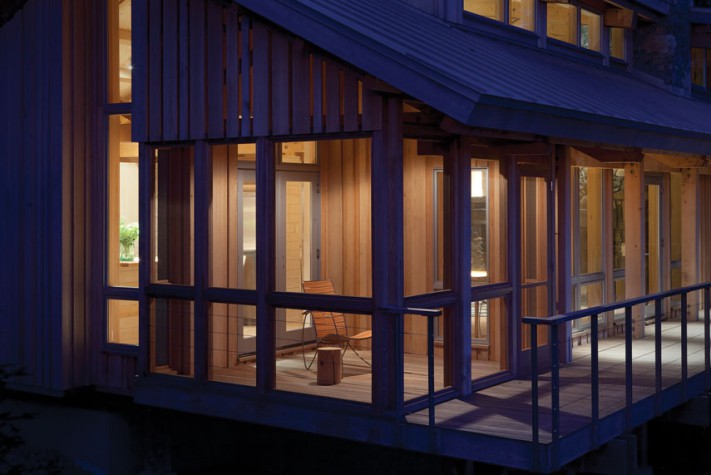 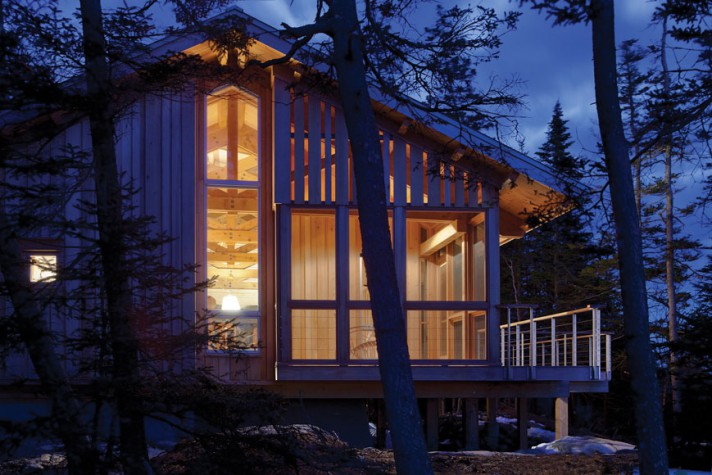 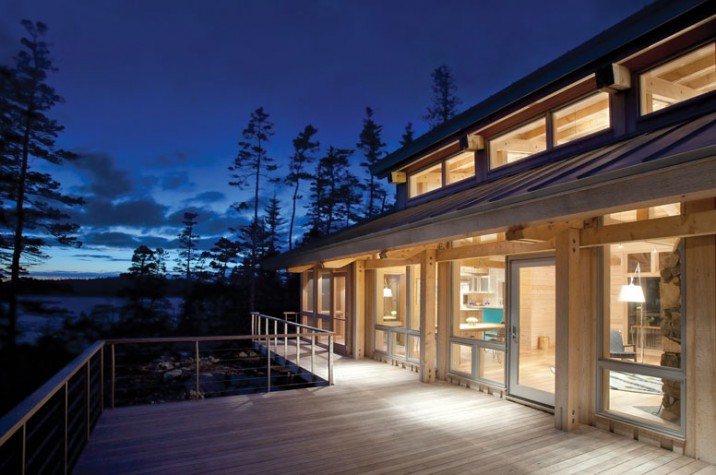 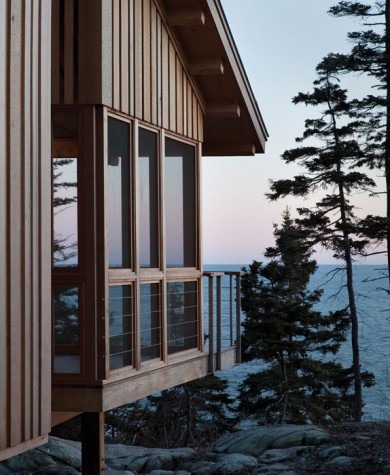 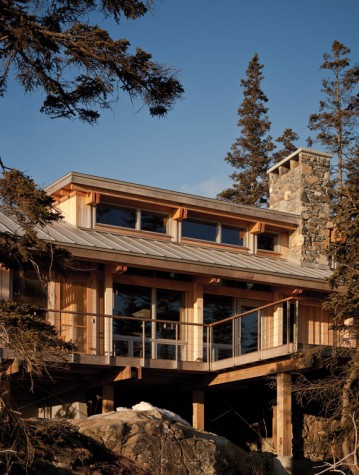 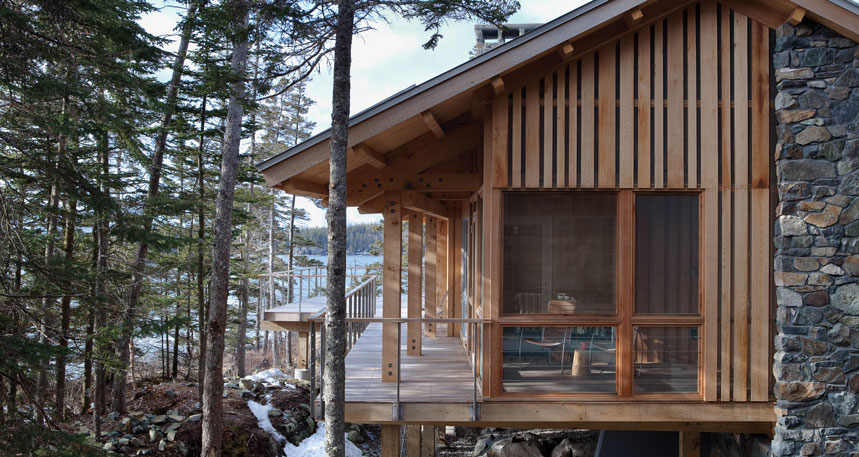 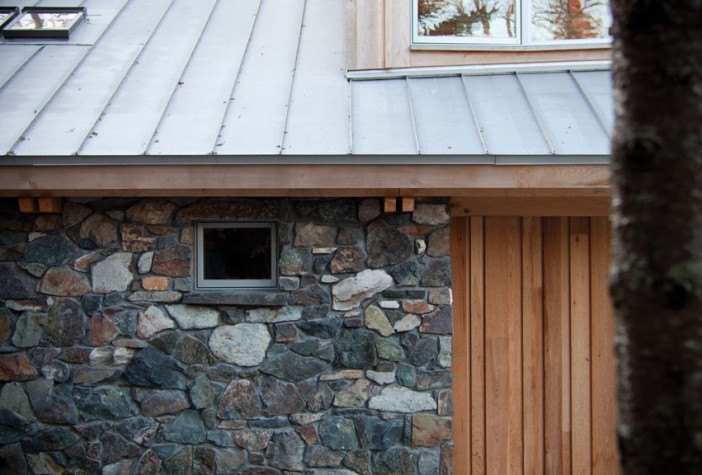 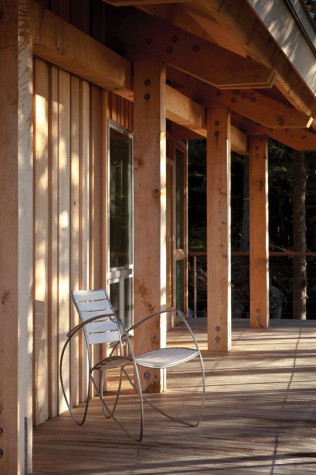 Roque Bluffs is the kind of place you visit to get over something. It’s on the edge of Maine, seemingly on the edge of the earth, filled with the kind of rugged beauty that renders visitors wordless. The drive to the house is a long and desolate crescendo. The solitary hint of the stunning seascape nearby comes only at the very end, when the road dips around a tree-lined bend and nearly touches the water. You don’t see ocean again until you are standing in the living room, taking in the view and the citrusy fragrance of Port Orford cedar.

The house is built into a rock ledge on a curve of land pointing into the Atlantic—nothing surrounds it but tall, straight spruce trees lined up like toothpicks. In the distance, waves pound Hickey and Calf islands. This land has been in Thornton Lothrop’s family for almost fifty years. They used to camp near the site before building a road and then a cabin just west of it. Lothrop would take long walks that followed the coastline, imagining what a house here would someday be like.

Though life eventually took Lothrop to the Midwest, Maine and the ocean he had come to know were never far from his mind. When he finally decided to build on his family’s land, he knew precisely what he wanted: a cottage, not a house; a camp, not a home; a retreat, not a social gathering place. It would be a place that would complement the landscape that he loved, a house that wore its structure on its sleeve. When you sat inside it, Lothrop wanted you to see how it worked.

To understand this last part, you have to understand Lothrop. An industrial designer by trade, he is someone who inherently values the design process. It’s no surprise, then, that he took an active role in the design of his own home, calling on his experience to help direct the project. Yet Lothrop couldn’t do it alone. He worked closely with a team that included architects Russ Tyson and Rob Whitten of Whitten Architects in Portland, Searsport-based structural engineer Albert Putnam, and Bucksport-based Nate Holyoke Builders. Lothrop looked to the work of Norwegian architect Wenche Selmer for inspiration. Her ideas spoke to him: simple forms, integration with the site, the generous use of wood, and leaving the landscape as untouched as possible. Lothrop wanted a house that would pay homage to the essence of the Maine experience he cherished: rugged landscape, changing weather, and remoteness. Architects Tyson and Whitten went to work on a design that would complement the site and work with existing landforms. Along the north side of the house, they designed a foundation that followed the topography of the site, with the south edge floating over the property on concrete piers. The materials that make up the home—wood and rock—further ground it to its site. Rock that was excavated for the mechanical room of the home was salvaged and reused for the masonry in the walls, fireplace, and chimney. Even subtle shifts in the floor plan help marry the house to the craggy rock. “Walls are slanted toward certain views,” explains Tyson. A main wall in the living room is angled toward the forest and road; in the bedroom, the ocean-side wall is angled ever so slightly to maximize views of Hickey Island.

“Everything was deliberate, each design decision was a response to this specific site.”

Careful positioning of the cabin not only brought the outside in but kept it intact as well. The team took great care to minimize disturbance to the existing landscape. Rather than seeing surrounding trees as an obstruction of the view, they saw them as an enhancement of it. “Having these trees in the foreground to the lighthouse and islands makes the view all the more dynamic, affording a foreground, middle ground, and background to the viewer,” says Tyson. Ledge outcroppings immediately to the east and south buffer strong coastal winds, while a rocky perch to the west was left untouched and serves as the visual focal point for the retreat’s western edge. In fact, one of the biggest decisions early on in the project was to leave the best part of the site untouched. “If we were to build right on top of it, we would’ve destroyed it. Now it’s saved and remains in view,” says Tyson.

To further connect the house to its site, interior spaces were oriented to the sun. Tyson and Whitten elongated the east-west axis of the cabin and opened its walls up to the south. The result is a house that follows the sun—Lothrop can rise with first light in the morning, either on the sleeping porch or in the bedroom, enjoy daylight throughout the day, and end with sunset on the screened-in porch. As much as this house is a story of a design dictated by its site, it is also a structural story. Immersed in the process of design and understanding how things work, Lothrop wanted the bones of the house to remain exposed, a visible skeleton integrated with the architecture. “There is a simplicity and honesty in the aesthetic of the exposed framework,” he says. “I sought a distillation of the surfaces so that most, if not for visibility, would be as functional as possible.” This was music to Albert Putnam’s ears. As a structural engineer, Putnam is usually the man behind the scenes, and projects like this one are rare. Since the structure was so exposed, his input was especially critical.

“Most of the structure is open to view, which made for infinitely more complicated detailing,” says Tyson, who collaborated closely with Putnam. As a result of the importance of the structure to Lothrop, his relationship with Putnam didn’t fit a mold. “I rarely get to the chance to collaborate with the architect and the owner—it removed the subjective part of exposed structural design. The client helped me assemble the design palette and wanted to know exactly how things would feel—literally—when assembled. Lothrop kept a piece of Port Orford cedar on his office desk during construction; that’s an engaged client,” says Putnam.

The structural design was based on and driven by the notion of a grid. “Ledge, concrete piers, timber posts, timber trusses—they all stack and are consistently installed on the grid,” explains Putnam. Engineer, architect, and builder all knew the grid and therefore anticipated the presence of a post on a consistent pattern. “The building envelope steps around the posts like a curtain wall—sometimes inside, sometimes outside—so it cranked up the performance requirements of our waterproofing details, and this is where it got complex. They had to be absolutely bulletproof while allowing the wood to breathe.” While a traditional timber frame is built using mortise-and-tenon joinery, this frame includes stainless-steel plates and wind-resisting shear walls—all requested by Lothrop, who wanted the connections exposed.

The revealed nature of the structure and its openness to the elements heavily influenced the choice of wood, which was a big decision given that the house has so much of it. Originally, Lothrop considered a local species—eastern white pine, traditionally used for timber frames—but when the team brought a sample to the site, they noticed a tunnel hole in the heartwood and extracted a wood-borer beetle larva with a pen knife. Lothrop’s previous experience told him that such an infestation would be difficult to eradicate once inside the structure. They needed something more durable. The team turned to Port Orford cedar, a northwestern wood that is naturally resistant to rot and pests. “Historically, it’s been used in marine building applications and boat building,” says Tyson. “We knew it would work perfectly on a harsh site like this with exposed joints open to the elements.”

For builder Nate Holyoke and his crew, the exposed structure presented a challenge—but one he welcomed. “Most contractors shy away from this work because it’s exposed structure—very tricky—you need to keep the engineer and the architect happy,” says Putnam. Not Holyoke. He and his team are used to working under harsh conditions and jumped at the opportunity to build a house like this. “Everything is visible in this house, so it was less forgiving,” says Holyoke. “It was very exacting. There were pieces that we had to do just by feel; we couldn’t get in there to measure.” And because Holyoke is based out of Bucksport, his crew relocated for the length of the project to Machias, working on the house by day and staying at a nearby motel at night. “It was fun. Having our whole crew working together and living together was a whole new experience for us,” he says. The team often had to battle with the site’s harsh conditions—snow, ice, the lashing sea, and temperatures well below zero Fahrenheit with strong winds.

Particularly challenging was designing the structure and exterior to age well in such harsh weather. “Originally, I felt a dark, cool color palette would be necessary to help the structure blend in,” says Lothrop. In retrospect, he realized the exposed rocks and weathered trees were more important to emulate—this character would be seen in the site stonework and eventual weathering and graying of the unfinished exterior surfaces and structural framing. “Over time, this whole thing, all the structure and the siding, will get more and more gray. Everything will just blend in,” says Tyson—which was Lothrop’s hope from the beginning.

Following the project’s completion, one of Lothrop’s relatives went out on the water and boated past the site. He later shared his perspective with Lothrop, who was relieved to hear the news: the house that was never meant to disturb its surroundings was barely visible. A quiet presence on the quiet land he grew up loving.