Close to Their Hearth 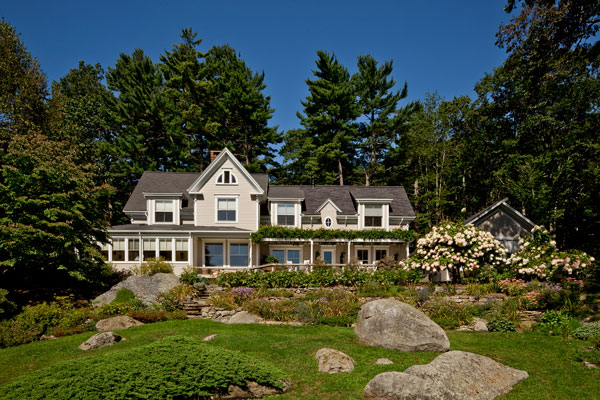 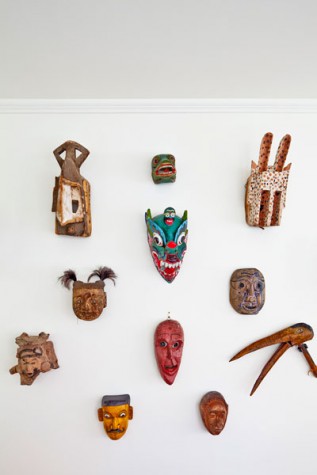 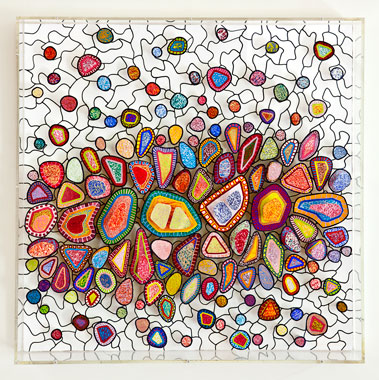 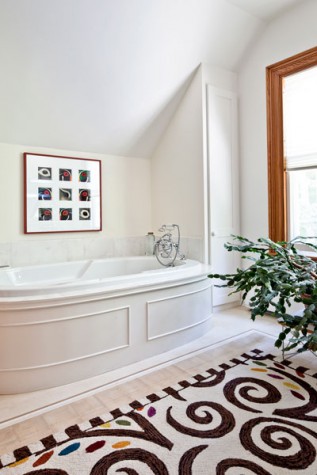 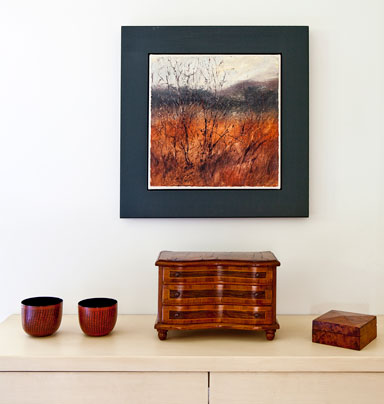 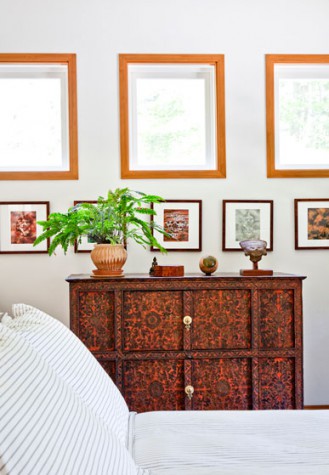 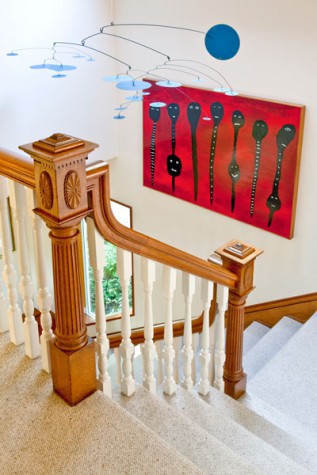 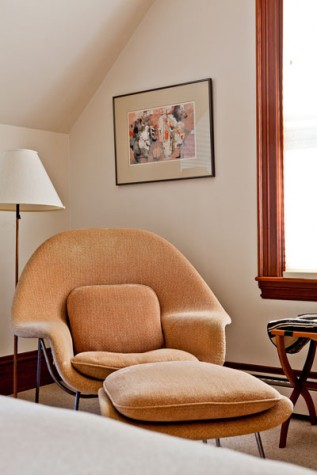 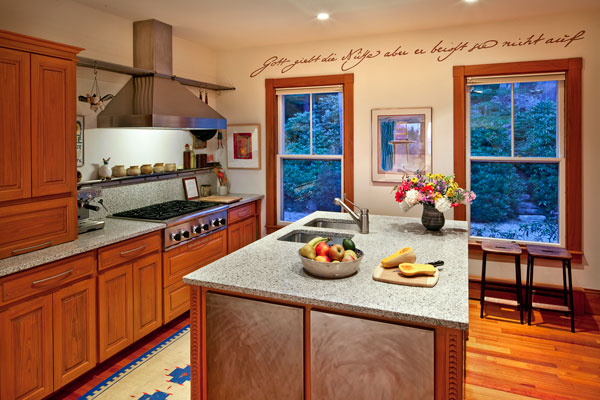 The house sits against the steep flank of a hill rising above Camden harbor. With the careful joinery and elegant detail of a clipper ship, it was built at the beginning of the century for Robbie Bean, a son of Holly Bean, the famed owner of Camden’s biggest boatyard, by its shipwrights. The outside face of the front door is made from hard pine, the inside, along with all the interior woodwork, from rare cypress. But steam power was already replacing sail, and for years the junior Bean kept the failing family business afloat by embezzling funds from the bank where he worked; finally, he was caught and sent to jail. In 1977, when Dave and Karin Thomas bought the house, it had, like its first owner many years ago, fallen on hard times.

“It was dark,” Karin Thomas recalls, shuddering. “I had to recreate it.” Hardly visible from the street, the house overlooks Camden, Penobscot Bay, and the islands beyond. It is a traveler’s house, a distance from the ocean while keeping the water in sight: a place to come home to. And Karin and Dave Thomas are inveterate travelers. Karin was born in Germany; she came to this country and worked as a dress designer, making gowns for movie stars and Grace Kelly’s mother. But tiring of fashion—“it was too fast”—she turned to interior design. During the course of Dave’s career as journalist and editor for Life, The Saturday Evening Post, and other magazines, the Thomases lived in New York and California and Europe; they have visited six continents.

They moved to Maine when Dave became editor of Down East magazine. On the face of it, Camden was an unlikely town for this cosmopolitan couple. Although they had loved their Maine summers on a remote island, the isolating winter was different. The first year, Karin says, “I was miserable. I turned to the house.” It launched her career in Maine (and currently she’s juggling five big projects). The front door of the house faces uphill; big windows with their elaborate moldings originally looked out on rocks and trees. Karin took down interior walls and switched the windows to the southern wall, which opens to the garden and the broad, spectacular view.

The result is both familiar and exotic: a contemporary captain’s house with traditional New England gables and clapboard on the outside, while inside a modernist, international aesthetic flourishes. The entrance hall is paved with limestone and furnished with a studio table and mirror and an antique Chinese armoire; beyond it, light beckons from the rearranged windows. The house feels as if it floats above the ground, buoyed by pale rugs and upholstery and warmed by the honey-colored wood. Art is everywhere.

The effect is at once sleek and homey, like the Thomases. Karin and Dave are tall and slender, athletic and elegant, and happy to stand around talking in the kitchen. Karin, with a model’s high cheekbones and wide-set eyes, dresses with architectural precision, whether she’s wearing fleece or a cashmere shawl. She is also a superb cook, famous for her gravlax, her home-cured salmon. On one kitchen wall is painted a quotation from the great eighteenth-century German poet Goethe, which translates: “God provides the nuts, but He does not bite them open.” Karin had an artist reproduce and enlarge Goethe’s handwriting, so that it seems a site-specific installation, a reminder of her childhood—and the origin of her attitude toward life.

Opposite that wall, a breakfast area leads to a south-facing deck extending the width of the house; it functions as the Thomases’ fair-weather living and dining room. In all seasons, that porch provides the transition between indoors and out. In the spring and summer, wisteria cascades from a pergola, providing shade; in winter, the snowy railing frames the landscape.

And in many ways the Thomases’ collection of art defines the landscape of their lives. They have put together an extraordinary assemblage that reflects their adventures, their discerning eye, and their passionate instinct for quality; it is their past made tangible. A seventeenth-century Swiss grain-storage chest they found in Geneva. An abstract painting that they bought when they lived in California. Shelves containing pre-Columbian figures. A wall of masks, from the Congo, Ivory Coast, Mexico, Burma. The bronze head of a Buddha that Dave discovered in Cambodia. “I wrapped it in foam and duct tape and lugged it everywhere with me for three weeks,” he says.

And much of the art is connected with Maine. Over the years, the Thomases have become stalwart supporters of Maine artists. Their involvement is both personal and professional. Dave recalls: “I quickly realized that visual arts—primarily painting—was where the action was in Maine contemporary culture. At Down East, I focused on Maine artists and their work.” From her first projects in Maine, Karin has collaborated with local craftsmen and acquired for her clients the work of Maine artists. In addition, the Thomases have long been involved with the Center for Maine Contemporary Art in Rockport, and they became close friends with Bruce Brown, its curator for twenty years.

Maine art also resonates with their own peripatetic histories. For the Thomases a personal connection to a work of art is crucial. It is no accident that most of Maine’s artists came to the state from elsewhere, and that their best work reflects complex responses to the astringent landscape and oblique northern light.

Karin points to a painting by John Walker hanging over the fireplace in the sitting room off the kitchen. Dave interrupts: “Let me tell you about the mantelpiece.” It is carved marble, a trophy from a New York renovation. “The client wanted modern. He wanted all the beautiful carved mantelpieces removed.” Karin adds: “And he gave this one to me.” The Walker, its paint, ochre and autumnal red, thickly applied on paper, is one of an important series depicting the cove where the painter lives during the summers—its seasonal changes captured during a sabbatical year. “This painting is like the Maine island where we spent summers when we lived in New York,” Karin says. “And it is like the shore in Estonia where my family had a summer house before the Second World War; there was a broad, muddy cove, too.”

A large woodcut by Yvonne Jacquette hangs in the dining room, one of the artist’s aerial views of New York at night. “It reminds me of my arrival in America by boat,” Karin remembers. “We came into New York harbor and docked early in the morning. The skyscrapers against the sunrise seemed to have no windows. And it reminds me also of cities I’ve left.” A Neil Welliver print, his haunting woodcut of Pitcher Pond at night, hangs on the wall opposite the Jacquette. A stunning, almost abstract charcoal of Cranberry Island by Emily Nelligan, who has summered there for the past half-century and rarely shows her work, hangs at eye level, and below it, on the Swiss chest, sits a delicate, mysterious Plexiglas construction by the brilliant young printmaker Anna Hepler.

On a wall in the living room, half-hidden by a large potted ficus, hangs a curtain of small metal squares suspended from monofilament line. Each square sparkles in a spectrum of color, catching moonlight and sunlight. It is something that Karin never points out to visitors, but visitors always ask. She shrugs and says: “Oh, I made that myself.” Light in a corner: it was necessary, an element of the whole, the house itself, cracked open like a nut and recreated into a work of art.