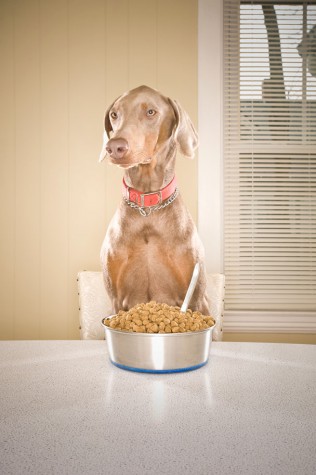 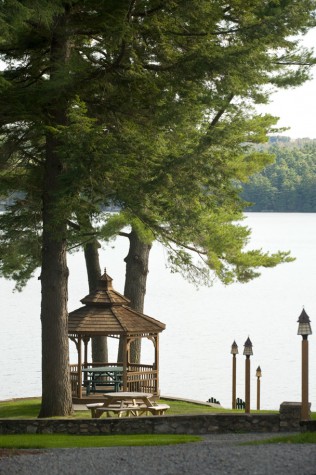 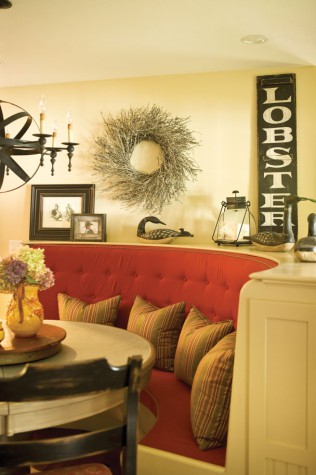 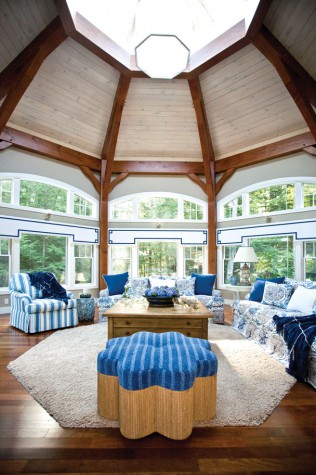 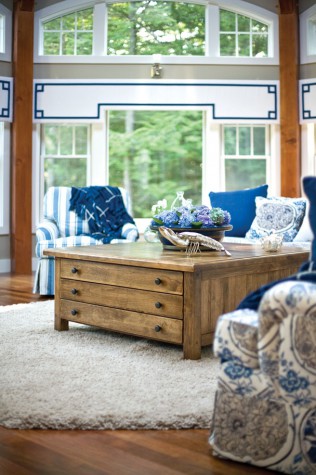 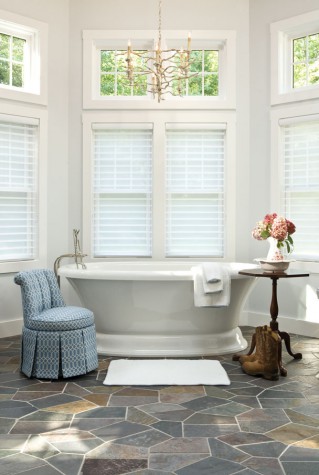 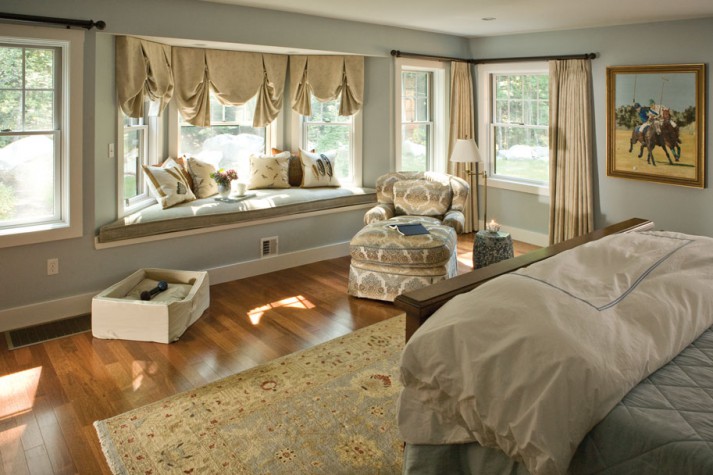 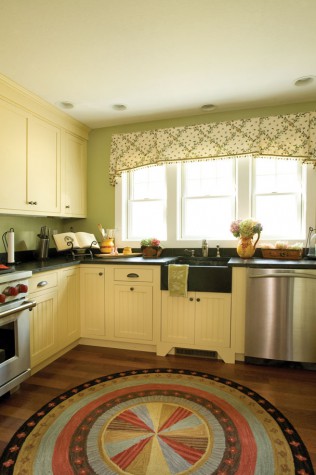 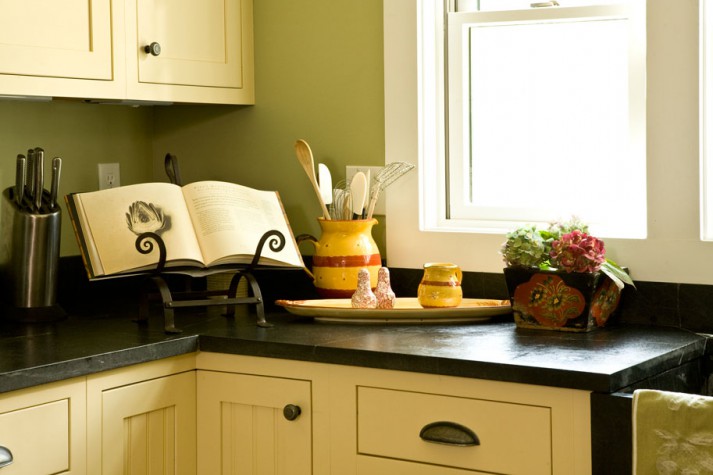 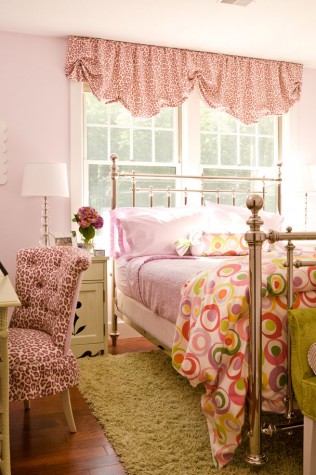 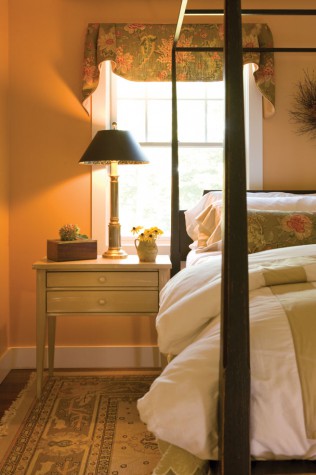 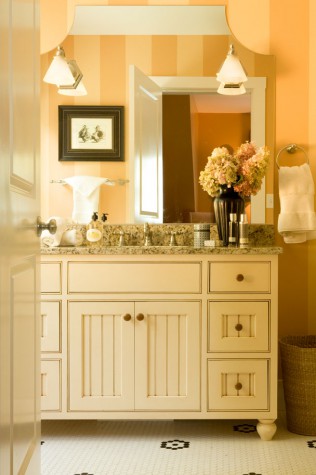 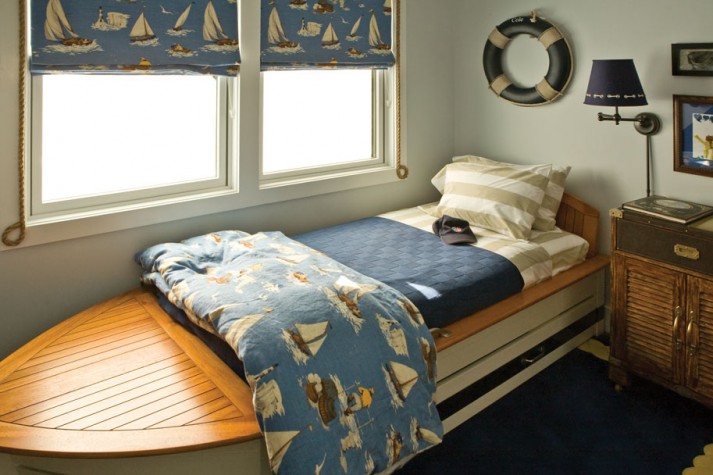 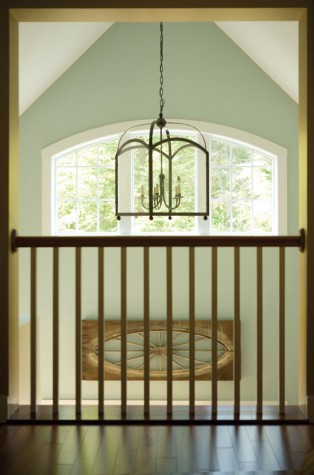 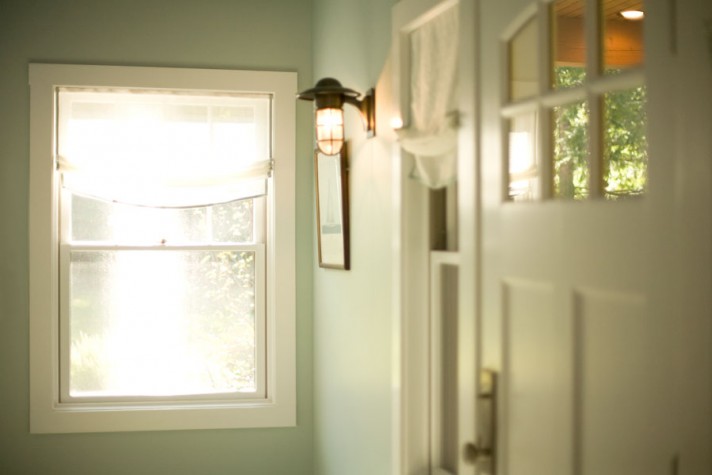 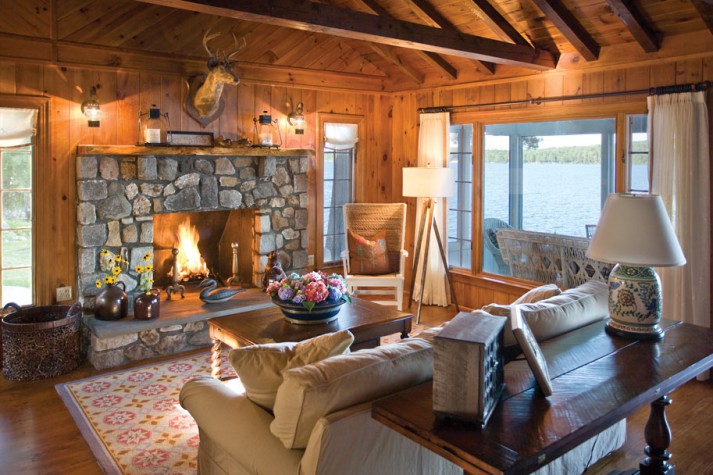 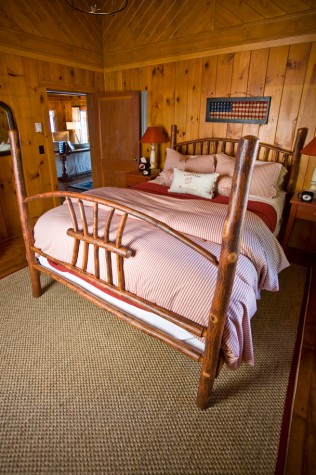 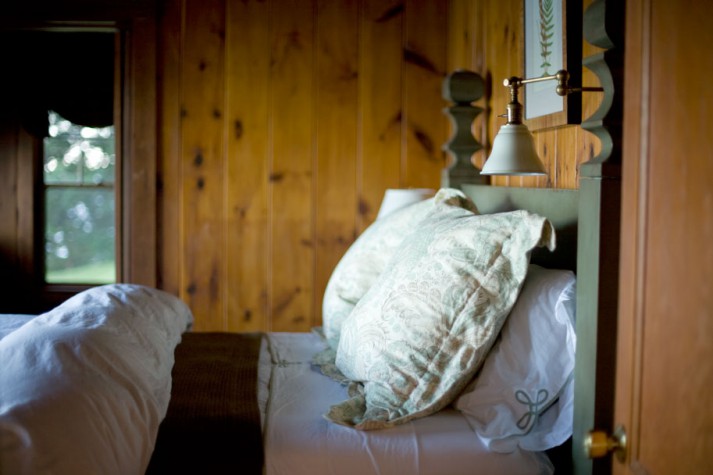 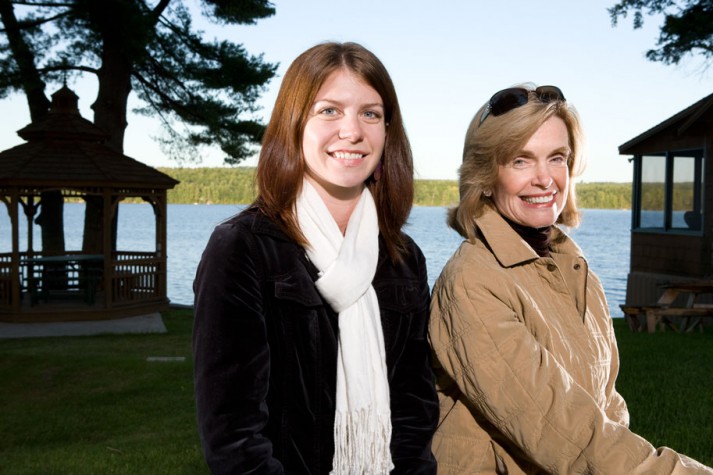 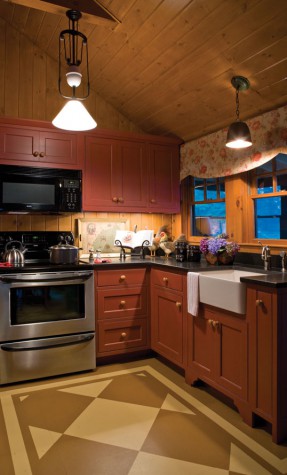 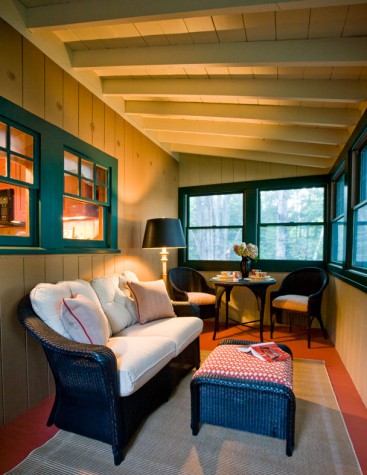 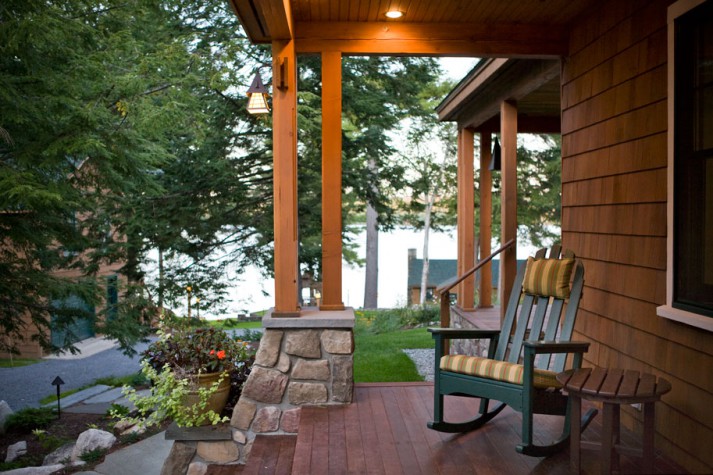 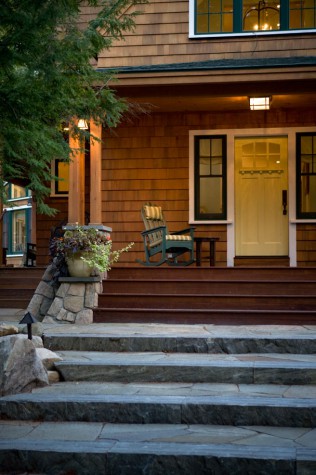 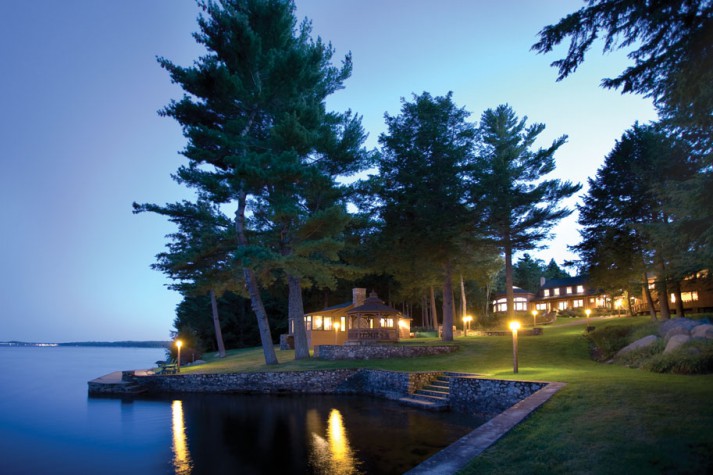 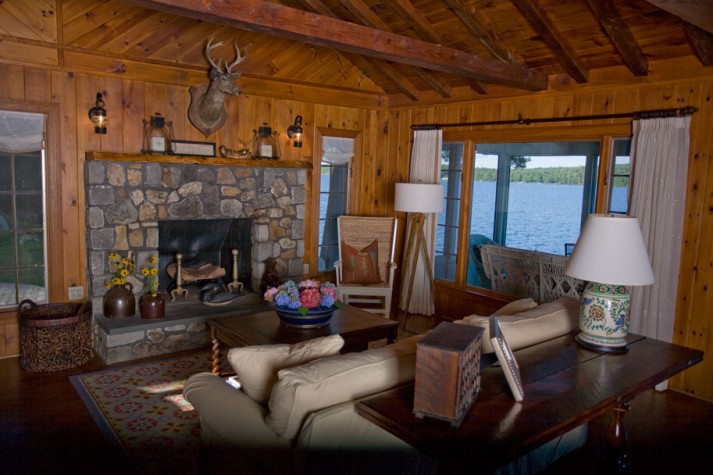 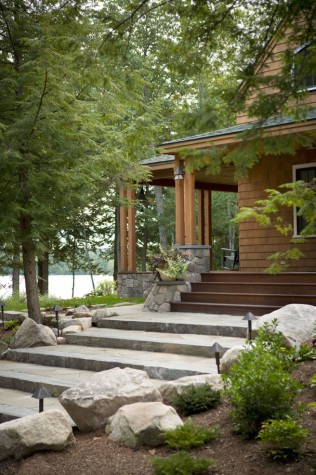 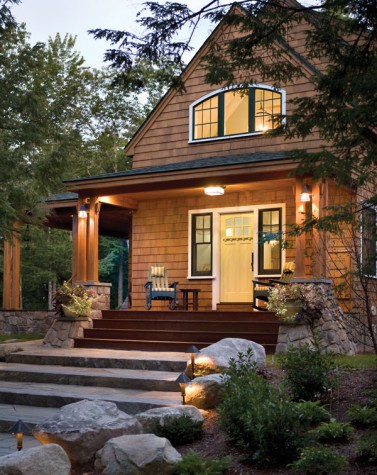 A family retreat on Long Lake redefines the meaning of camp

Maine’s rugged coastline is so long and serpentine that it seems to unwind forever. Miles inland, however, far from the crashing waves of the Atlantic, and beautiful in its own right, is a different kind of waterfront: the shores of Maine’s serene lakes region. On a map, the area is speckled with various shapes and sizes of blue, with Long Lake running in a narrow strip down the middle. While each lake has its own unique community, a common thread unites them all: the mystique of a lake in summertime.

On the western side of Long Lake, nestled at the end of a private road, is a family compound, a hillside retreat that gracefully meanders down to the water. At the lake’s edge, the property’s gem—a charming cottage from the 1930s—sits practically on top of the water, built long before shoreline zoning laws were in place. Uphill from the cottage, a garage built during the same decade features an apartment above and kid’s playroom below. On top of the hill is the masterpiece: an Adirondack-style lake house with recent additions, a porch lined with rocking chairs, and stunning elevated views. The entire property exudes that nostalgic lakeside summer feeling, a kind of rustic serenity made complete by the gathering of family.

For the family who vacations at this camp, arriving here for the summer from their Florida home means one thing: rest and relaxation. “We get here and just let out a big, relaxing sigh. We work hard all year with school, activities, and volunteering; when we come here, it’s truly our downtime,” say the homeowners.

Having just arrived for the season the day before, there is plenty of post-winter work to do before unwinding: dusting off cobwebs down by the cottage and cleaning off the pollen-covered porch, not to mention unpacking for their summer-long stay. Despite the long to-do list, relaxation dangles within reach.

From the moment they first laid eyes on the property, the homeowners knew it held promise. Formerly in the restaurant business, the couple sought a seasonal retreat for their family and friends that centered on entertaining and cooking. Almost immediately, they began envisioning the possibilities: afternoons waterskiing on the lake, lobster bakes at the outdoor kitchen, dinners in the gazebo, and “campouts” in the cottage with their two children. Family ties to Maine and memories of summer camp further enticed them to buy.

Once the property became theirs, though, the real work began. Around seventy years old, the original cottage and garage were in states of serious disrepair, and the homeowners wanted more living space in the main house. Architect Thomas Henken of Florida-based api(+) was brought in to design an addition that includes a master bedroom suite and an octagonal living space that the family has coined the “O Room.”

Henken sought to unify the property and make the separate buildings work together cohesively, including the original garage and cottage structures. “In designing the additions, we were conscious to reduce the scale of the building by adding portions like the octagonal living room and master bedroom that were sympathetic to the scale of the other buildings,” he says. Raymond Hanian of Hanian Properties, Inc., in Newry oversaw all construction and finish work, including the historic cottage—a charming two-bedroom structure with a vintage kitchen and enclosed porch overlooking the waterfront.

For the homeowners, one of the overall goals for the property was to bring the beauty and serenity of the lake inside. “We wanted to open up the space so we could see down to the water and watch the kids and dogs running around,” they say. In the main house, this idea came to life with the addition of the window-filled O Room, which was inspired by an octagonal room that served as a family gathering place in the owner’s childhood home in Michigan. “This is the entertainment hub where we play cards and games. We cram lots of family in here,” they say.

Another space where family convenes is the outdoor kitchen down by the water and next to the cottage. The homeowners—avid cooks and former owners of an Italian bistro in Florida—decided to build this full-fledged cooking area in lieu of expanding the relatively small kitchen in the main house. With the help of Cumberland-based Steinberg Custom Designs, the kitchen was outfitted with a wood-burning pizza oven (perfect for “terrific pizza parties”); a 48-inch infrared grill for steaks, fresh vegetables, and rotisserie chickens; and two side burners for lobster bakes. It has since become the entertaining epicenter for the family. “It’s great because we are able to use the full kitchen from the cottage to support it, and the eight-foot butcher-block island on wheels is the perfect place to cook and then quickly turn it into a buffet for service,” says the homeowner.

The property’s sloped terrain proved a unique challenge to landscape designer Susan Carter of Gnome Landscaping. This was especially true of the location of the outdoor kitchen, where the grade of the land is uneven. “We had to tuck the kitchen into the grade, which meant excavating to an existing stone wall and dropping the kitchen into it,” explains Carter. In addition, the design of the landscape had to adhere to lake zoning regulations. “We had restrictions on the amount of patio space we could have, so instead of a large patio area, the cooking workspace was the only hardscape we could create. Everything else had to be grass,” she says.

On the outside, the property blends in seamlessly with its natural surroundings; it was just as important that the interiors remained true to the lake-house style as well. The homeowners brought in Florida-based interior designer Joan Simonsen-Hickok, with whom they had a long history, to design all the interiors on the property—both new and old. With the help of project manager Christina Heins, Simonsen-Hickok created a design that is as classic and timeless as it is comfortable and in keeping with the kid- and pet-friendly camp vernacular. One of the challenges was marrying the style of the more modern main house with the rugged charm of the historic cottage. “We sought to blend rustic with elegance and to recognize the progression of time from the cottage to the main house,” explains Simonsen-Hickok.

The designers chose fabrics and furniture that matched the regional terrain: natural woods and a deep palette of blues and greens to complement the colors of the lake and trees. Comfortable, easy-to-maintain fabrics such as cotton, chenille, and wool were selected to be cozy in the winter and cool and soft in the summer. For the family, the home is a welcome change from their permanent residence in Tampa: “We get a lot of warmth in Florida. Here, we wanted it to be comfortable and cool,” they say.

Working within the confines of a few tricky spaces, the interior design also involved numerous built-in pieces to save space, including a desk in the living room and a closet in the daughter’s bedroom. Wherever possible, Simonsen-Hickok and Heins designed ways to display meaningful items like family photographs and mementos, and incorporate special touches, such as antique Maine map wallpaper. “This house centers on the importance of family. Our goal was to create a warm, inviting space that was simple and unpretentious,” says Simonsen-Hickok.

According to the homeowners, who eschew “fussy and formal” for relaxed and comfortable, the design perfectly fits their lifestyle. “We wanted the beds to look like you could lie on them and the sofas and chairs to look like you could sit on them,” they say. Simonsen-Hickok translated these wishes into a classic design that is practical yet beautiful and echoed across the entire property.

Today is the family’s second day since arriving for the summer, and a steady, unrelenting rain keeps the kids, who would normally be running around outside or swimming in the lake, in the basement happily playing make-believe. Music is on upstairs, and the family’s two dogs—a small terrier and a larger rottweiler—are lounging around, occasionally venturing through the doggie door and into the rain. It might not be the typical, picturesque summer day at the lake, but there is something perfect about it anyway: family has arrived.