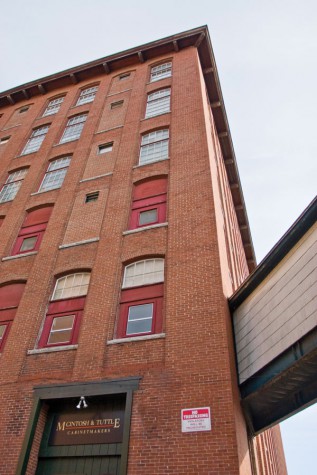 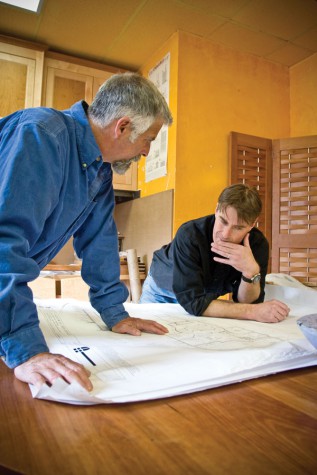 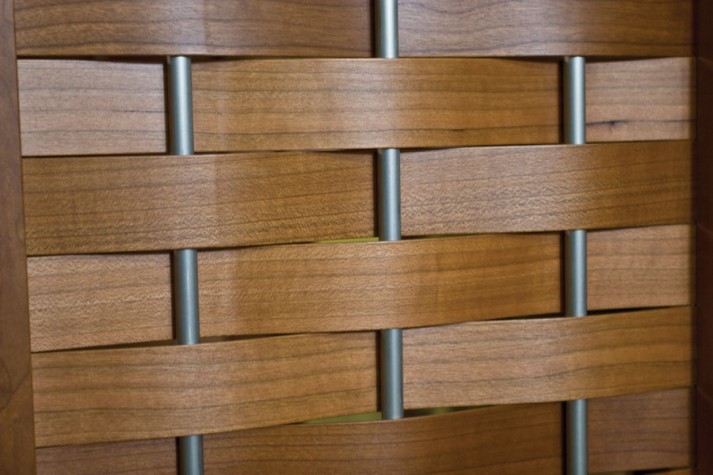 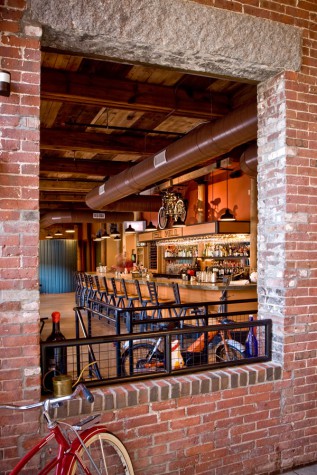 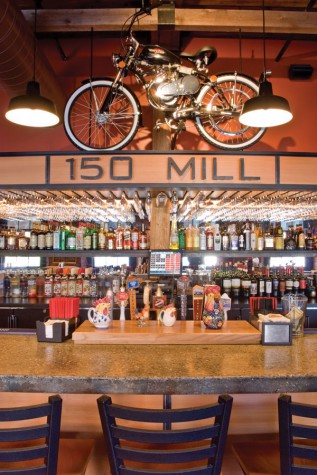 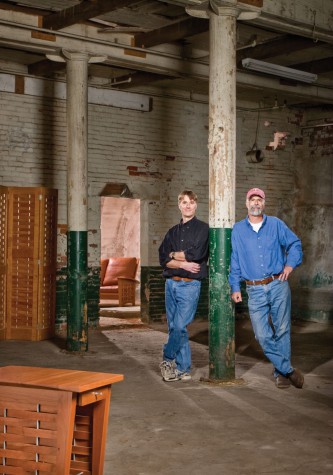 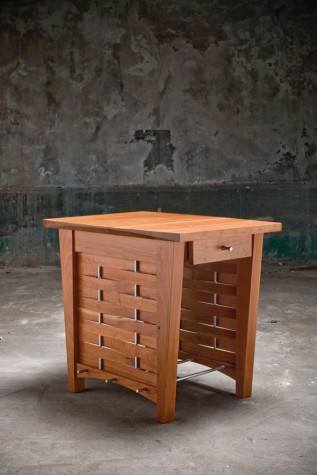 A pair of master cabinetmakers blend passion with practicality

Not far from the banks of the Androscoggin River, down an alleyway of brick in the heart of an old textile mill in Lewiston, Todd McIntosh has his hands full. Literally. One at a time, he carries two stone sink basins from his truck to the workshop, laboring slightly under their weight. “These are gonna be great, aren’t they?” he says to his business partner, Jon Tuttle, after he steps inside. The sinks are ready to be installed into custom-made mahogany bathroom cabinets, where the design calls for their stone surfaces to project outward from the cabinetry. This is a new technique for the craftsmen, but they are confident: “We’re not afraid to go out on a limb and get out of our comfort zone,” says McIntosh.

Designers and creators of high-end cabinetry and furniture, McIntosh & Tuttle Cabinetmakers have been in business for nearly nine years. The ever-optimistic cofounders Todd McIntosh and Jon Tuttle began their journey together at a cabinet shop in Freeport. After a few years, the two decided to break away and form their own business, but not without first facing a significant obstacle—they were turned down by every local bank they approached for a start-up loan. It wasn’t until the Androscoggin Valley Council of Governments stepped in and helped push their idea through that they received the funding they needed. Since then, McIntosh & Tuttle has grown in leaps and bounds. Their initial sales goal of roughly $200,000 is modest in comparison to their 2008 gross sales of more than $1.1 million. Today, the McIntosh & Tuttle team includes seven cabinetmakers, a finish carpentry crew, and an installation team. While they specialize primarily in residential cabinetry, they have branched out into commercial projects and custom metalworking, in addition to producing two furniture lines.

Despite their shared love for woodworking, Tuttle and McIntosh took different paths to their shared destination. McIntosh, a Rockland native, began working with wood as a child. After a stint as a professional golfer, he owned cabinet shops in Portland and New Gloucester. His great grandfather was a cabinetmaker in Camden and one of the founders of the Knox Woolen Mill. Tuttle, a fourth-generation Mainer, moved west after college and taught himself furniture making while living on a Navajo Indian reservation in Arizona. In the 1990s, he returned to Maine to work as a cabinetmaker. While McIntosh, 51, might be able to boast a longer history in Maine woodworking, the 47-year-old Tuttle likes to playfully remind his partner that he has a longer history in general. “I guess that makes me the ‘senior’ partner,” says McIntosh, before the two break into laughter.

Here, in their 9,000-square-foot shop, Tuttle and McIntosh have mastered the art of playing off each other, which is unsurprising given their successful, decadelong partnership. McIntosh is on the road most of the time, selling products and doing the bulk of the design work, while Tuttle handles the day-to-day operations. “We’re very different and maybe that’s why it works,” says McIntosh. “I’m not the organized one; I’m much more scattered. By nature, I’m probably more gregarious, more of a people person.” Tuttle is silent, but smiles. “See,” McIntosh points out, prompting more laughter.

The pair’s comfortable, laid-back banter turns serious, however, when discussing their creative design process, which they build primarily around listening. “We’re not too structured,” says Tuttle. “I think one of our strengths is that we humanize it so it isn’t just a process,” he adds. “We try to get an understanding of what clients want their space to feel like, not look like,” McIntosh explains. “I like to be in their space to see how they live and what they want—what they say they want, and what they really want,” he adds. Many times, the two are different. “We’re very practical and try to push that off on clients. They aren’t used to somebody saying, ‘That’s not a good idea.’ We try to involve them in the creative process so the end result is a reflection of them, as well as us,” McIntosh says.

COOKS IN THE KITCHEN
Though McIntosh and Tuttle are the first to admit that it is a bit of a cliche, the phrase “form follows function” applies to every piece that leaves their shop. “It doesn’t make any difference how pretty the kitchen is if it doesn’t work for you and the way you cook,” says McIntosh. Part of the team’s talent for designing incredible spaces comes from the fact they are not strangers to the kitchen themselves. Tuttle is a former chef and McIntosh spends a great deal of time cooking in his own kitchen. “I think we bring that to the table—more so than somebody who’s learned kitchen design out of a book or by taking a course or getting a certificate,” says McIntosh as he takes out a photo of his home kitchen. It is a deviation from the grand showplaces that fill the team’s portfolio, yet it is beautiful in its own right. “It’s really built to work in,” says McIntosh, rattling off the long list of materials he used—from dyed plantation-grown mahogany, concrete, glass tiles, brass, and stainless steel to reclaimed wood from beams of an airport hangar at Brunswick Naval Air Station.

This integration of a wide array of materials is another hallmark of the McIntosh & Tuttle name, and the company relies on a large network of local artisans and suppliers. “We’re really not selling just cabinetry,” explains McIntosh. “We’re selling a group of craftspeople and artisans of different trades who we have longstanding relationships with—everything from stainless-steel fabrication to glass to concrete to blacksmithing.” The result is a product rich in local flavor and craftsmanship.

While the atmosphere inside the shop is light hearted (a hula-girl bobblehead doll affixed to a chop saw elicits another laugh), McIntosh and Tuttle boast a talented, hard-working staff with a deep passion for woodworking. Nearly everyone has an outside hobby—from music to organic farming—making for an eclectic, well-rounded team. “Often, more important than someone’s skill as a woodworker is their personality and how they’ll mix with everyone else. In a small shop like this, it’s very important,” says Tuttle.

As the afternoon light exposes sawdust on the workbenches, McIntosh pulls out drawings for a house in Florida that will soon become a second home for a Maine couple. If the project comes to fruition, it would be a big job for McIntosh & Tuttle: one kitchen and seven bathrooms. Should these kinds of large projects ever run out, it is hard to imagine McIntosh and Tuttle being anything but good-humored; after all, it is their love of the craft that drives them, not the pursuit of profit. “Even if I could only work on kitchens like my own for the rest of my life, I’d be happy,” McIntosh says with a grin.