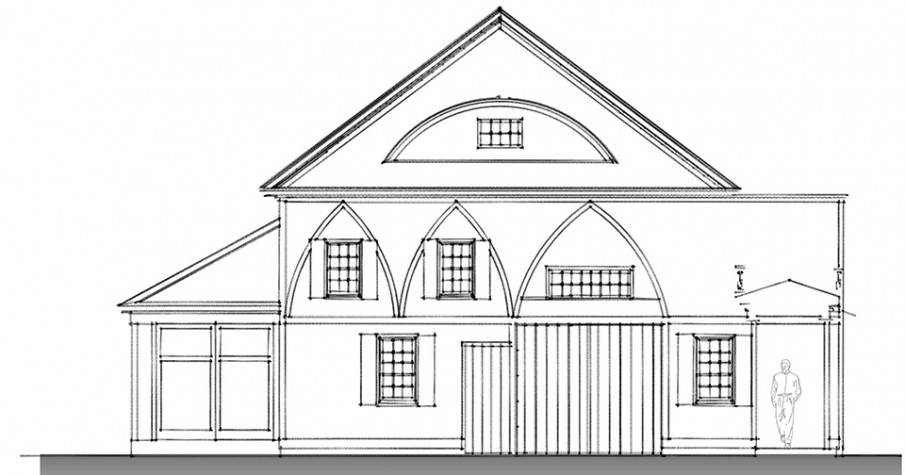 Two years ago the owners of a Greek Revival home located in the Kennebunk Historic Preservation Overlay District made a decision to reconstruct the barn that was once a significant part of the property. The main residence was built in 1834, and the barn structure and connection to the residence were added during the middle of the nineteenth century. It is estimated that the barn and connection were torn down in the early part of the 1900s when they were replaced with a small detached garage that was being used as a pool house. The goal was to replicate the original barn, provide a covered connection from the main residence to the barn and existing pool area, and to incorporate the small existing garage into the design.

Graham Architects has developed a phased construction plan for the property, which includes reconstruction of the barn as well as a landscape plan appropriate to the period of the building. Their major challenge was to determine the size and scale of the original structure. Three archival photographs and a map showing the structure were found at the Brick Store Museum in Kennebunk. Copies of the images were imported into design software and scaled to a proportion relative to the current survey and photographs of the property. The archival photographs provided a unique view of the former barn. The main street-facing façade of the barn had architectural elements that reflect a Gothic Revival style that is in contrast to the Greek Revival style of the main residence.

Working with the Historic Preservation District guidelines, Graham Architects designed a columned portico extending from the residence to the reconstructed barn and continuing to the pool area located at the rear of the property. The portico detail is a continuation of the existing front entry portico original to the main residence.

In August 2014 the project was presented to the Historic Preservation Commission of Kennebunk and received a Certificate of Appropriateness. Upon completion, the owners will have reconstructed a part of the past, returning the property to its grand beginning.