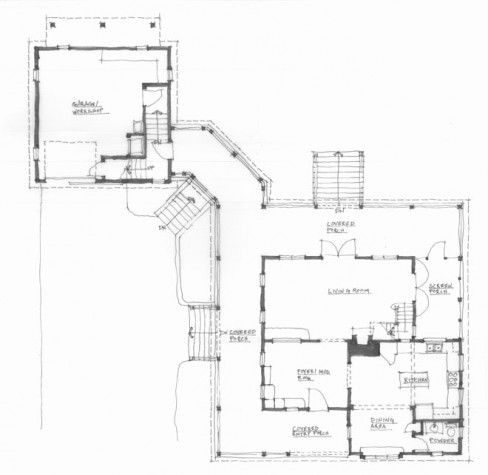 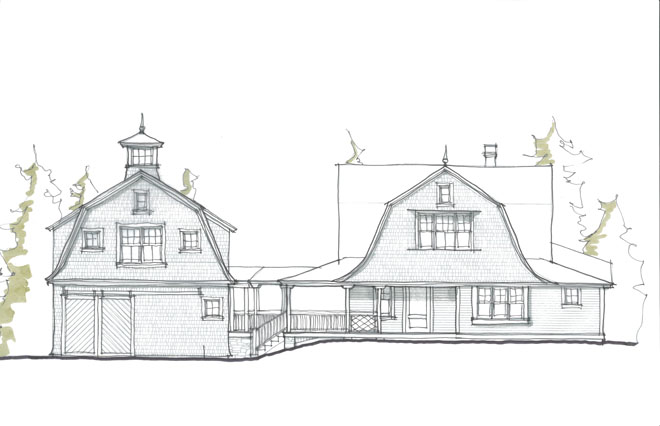 Set atop a bluff sloping down to Casco Bay, this gambrel-style cottage was one of the oldest homes remaining on Cousins Island. Built in 1905, the cottage was once occupied in the summers by Sir Henry Worth Thornton, the president of the Canadian National Railways, who was credited with modernizing the railways throughout Canada. The homeowners turned to Kevin Browne Architecture in the hopes of preserving the character of the home while expanding on it to create a cozy four-season cottage for their family for years to come. The homeowners wanted to make the most of the lot and the water views, which include full views of the sunsets over coastal waters. The existing cottage and garage had been added onto half-heartedly over the years and were in rough shape. The first step in the redesign of the main cottage was to create a softened gambrel roofline that runs straight through to the waterside of the cottage. On the first floor of the main cottage on the waterside of the house, the deep covered porch was continued to create a wraparound porch around most of the cottage. Browne sought to preserve the high ceilings and beadboard walls of the interior spaces of the first floor, so only updates for modern conveniences were made. The existing garage, pieced together in the early 1980s, was replaced with a gambrel carriage house that is connected by an extension of the wraparound porch of the main cottage. Because the house was originally built as a seasonal cottage, Browne and his team made several energy-efficient upgrades, including closed-cell spray foam in the walls, ceilings, and floors; low-e replacement windows; and a new heating system with high-efficiency heat pump units.