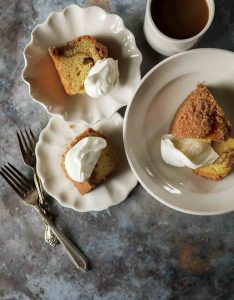 CAMPFIRE POTTERY and BRAVO JENNY have teamed up and launched a new line of ceramic wares. The vintage-inspired limited-edition line includes pieces such as tumblers, small bowls and plates with scalloped edges, and a cake platter. The collection is meant for everyday use, with four different color options—bone, white, smoke, and sienna. “Campfire’s ethos is to create ceramic pieces that bring people together, and this collection inspires just that,” says Kristen Camp, cofounder of Campfire Pottery, in a press release.

Created by Czech company STUDIO 519 for EGOÉ, the NESTBOX is every camper’s dream come true. A plywood module easily fits into the trunk of a car and expands to become a double bed with a fully equipped kitchen. Each element in the Nestbox effortlessly stows away for travel but can be set up for cooking and sleeping in just a few minutes. Except for the sink, everything is locally sourced in the Czech Republic, including the birch plywood used throughout, which lends warmth to the interior. The Nestbox comes in four different sizes and can be customized to have features like a cooktop, a mini fridge, a sink, and a shower attachment. 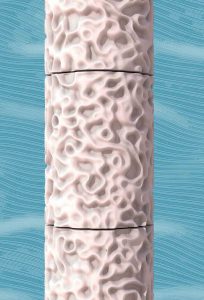 U.S. design workshop OBJECTS AND IDEOGRAMS is working on a research project that 3D prints underwater “houses” out of calcium carbonate for coral reefs and marine life. Started three years ago by director Alex Schofield after he learned of mass die-offs and bleaching happening to coral reefs around the world, CORAL CARBONATE’s pieces are cylindrical with porous, rocky surfaces that act as a foundation for coral reef structures. Calcium carbonate is an abundant natural material native to marine ocean environments, often found in limestone, marble, and chalk. Objects and Ideograms hopes to one day acquire the material through carbon sequestration (removing CO2 from the atmosphere), similar to how coral polyps pull carbon from the water and convert it into calcium carbonate to form their skeletons. According to Schofield, the only challenge the project faces is the size and number of 3D printers available—all other parts of the fabrication process are easy to reproduce.

A project that honors veterans began in August on the mall in downtown Brunswick. The VETERANS PLAZA MONUMENT pays homage to veterans for their service, no matter where or when they fought, or if they are living or passed on. The monument will have 445 granite blocks with the names, military branch, and service dates of specific veterans—their rank, however, will not be included. The new memorial will have 12 surrounding posts commemorating major American conflicts that range from the American Revolution to the War on Terror, and it will be incorporated into an existing monument on the Brunswick mall. ATLANTIC LANDSCAPE CONSTRUCTION of Ellsworth was chosen as the general contractor for the project. The monument will open to the public on Veterans Day, with an option to attend the event virtually. 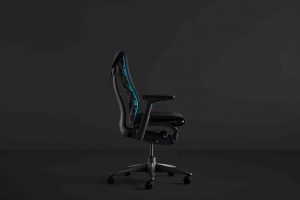 Iconic furniture company HERMAN MILLER and computer accessory company LOGITECH recently released a chair completely dedicated to gaming. Called the EMBODY GAMING CHAIR, its ergonomic design is meant for people like professional e-sport athletes and content creators, who often sit for 10 or more hours each day. The chair’s features include copper-infused cooling foam to keep even the sweatiest of users cool, an adjustment that supports the user in a forward-leaning position, and “pixelated support” (100 mattress-like coils) that distributes weight. According to Herman Miller, the pixels near your sit bones are harder—to support greater pressure from your bottom—and softer toward your legs so as to not compress arteries. The Embody Gaming Chair is available online at hermanmiller.com, retails for $1,500, and arrives at your door fully assembled.

Society is increasingly dependent on lithium-ion batteries, but the battery industry has become dependent on cobalt—a toxic mineral that is heavily linked to unethical mining practices, including the use of child labor. A research team at the UNIVERSITY OF TEXAS has replaced cobalt with a precise combination of nickel, manganese, and aluminum ions. The battery has a slightly lower energy density than standard cobalt batteries, but the cobalt-free battery could operate at higher voltages. While this is not the first cobalt-free battery, this is the first one that doesn’t have noticeable performance issues, such as a short battery life or low energy density, according to Arumugam Manthiram, director of the Texas Materials Institute at the University of Texas.

For its first furniture line, 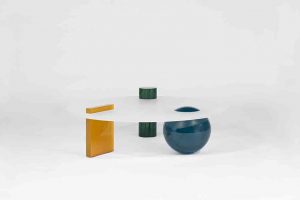 Brussels-based COBRA STUDIOS has created THE SOLIDS collection, which comprises three tables and a standing lamp. The geometric tables feature chunky, brightly colored legs made from glossy resin that take different shapes—spheres, cylinders, and zigzags—and pierce through soft, matte white tabletops; the lamp’s splayed legs, thin steel body, and cylindrical emerald shade contrast with the rest of the collection. “Contradiction is key: hard shapes need to collide with soft touches,” says Cobra Studios. Each piece of furniture is named after a significant building or figure in the Greco-Roman world: The Santa Maria dei Clarici is a coffee table named after a church in Rome, the Cicero dining table is named for Roman statesman Marcus Tullius Cicero, the Priape side table takes its name from the rustic Greek god Priapus, and the floor lamp is named after the Roman emperor Otho.

A new facility for MAINE WATER COMPANY is under construction in Biddeford. The $50 million water treatment plant will replace the existing 136-year-old facility, which is one of the oldest in the country. Once complete, the SACO RIVER DRINKING WATER TREATMENT FACILITY will serve about 40,000 residents in Biddeford, Old Orchard Beach, Saco, and Scarborough. As part of the project, more than 250 forested acres will be preserved, which will have community access and will serve to protect the Saco River source and conserve wetland habitats. MHW CONSTRUCTORS is the contractor for the facility, which is expected to be up and running by spring 2022. 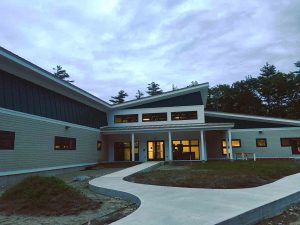 The CENTER FOR WILDLIFE is completing a new facility inspired by nature at the base of Mount Agamenticus. Seven years in the making, the campus will have a veterinary clinic, intern dormitory, auditorium, classrooms, and a nature discovery center, as well as an outdoor amphitheater, nature trails, and outdoor education spaces. The ecologically sensitive site will help strengthen relationships between humans, wildlife, and the environment, and will have interactive indoor features and exhibitions such as a life-size tree and a replica of a vernal pool. The Center for Wildlife worked with MCHENRY ARCHITECTURE, JEWETT CONSTRUCTION, and AMBIT ENGINEERING to construct the $5.5 million project.