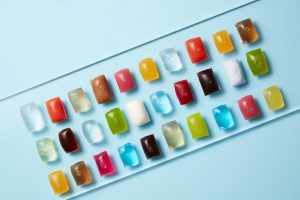 London design startup NOTPLA, short for “not plastic,” has released a line of plastic alternatives made from seaweed that are compostable, dissolvable, and, in a few instances, edible. Created with the goal of finding a solution for environmental and health problems caused by single-use plastics, NotPla has introduced condiment packets, film wrap, and a lining for to-go boxes made from seaweed. Due to its ability to grow up to three feet in one day (without the aid of fresh water or fertilizer) and to harness carbon dioxide, seaweed is an incredibly sustainable material that does not compete with other resources for land. In addition, NotPla has also partnered with nonprofit CANOPY to lower the amount of waste from its production processes by creating a faux paper made from leftover materials from NotPla that can be used as a packaging alternative. 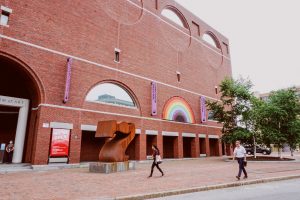 After introducing THE PMA BLUEPRINT—an $85 million capital campaign aimed at increasing the museum’s footprint to allow for more exhibition and community spaces—in February of this year, the PORTLAND MUSEUM OF ART launched its CAMPUS EXPANSION AND UNIFICATION INTERNATIONAL DESIGN COMPETITION in June, inviting experts from around the world to design buildings that represent the museum’s next phases embodied in the blueprint. The international open call and juried architectural process calls for applicants who understand the unique features of Portland to present designs that focus on the long-term effects of the project on the state and the community. With the goals of the project defined by focus groups, workshops, and data collected through surveys and letters, the final design will need to have an emphasis on open, innovative spaces that are able to adapt to various needs, whether for an exhibition or a specialized program. The selection process will be segmented for transparency, feedback, and engagement, with a shortlist announced by midsummer. Finalist concepts will be displayed at the museum in November, and a winning team and concept will be chosen by the end of December 2022. Photo: Courtesy of Portland Museum of Art. 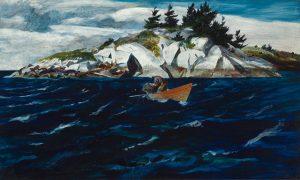 In partnership with the BRANDYWINE RIVER MUSEUM OF ART in Chadds Ford, Pennsylvania, and the WYETH FOUNDATION FOR AMERICAN ART in Wilmington, Delaware, the FARNSWORTH ART MUSEUM in Rockland is part of a project to share 7,000 works by Maine artist ANDREW WYETH, only about 15 percent of which have ever been viewed publicly. This three-way partnership was set up by Wyeth and his wife, Betsy, in 2002, through THE WYETH FOUNDATION. As of Betsy’s death in 2020, the agreement is now effective, with the foundation in the artist’s name owning all the art while the three museums conserve and exhibit it, including works in Andrew Wyeth: Early Temperas, on view at the Farnsworth through October 16. 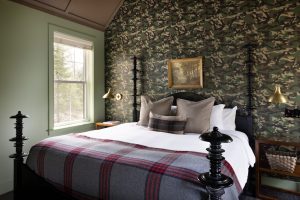 Pulling on themes of countryside, mountainside, and seaside, a collaboration between menswear designer TODD SNYDER and Kennebunkport luxury hotel HIDDEN POND RESORT has resulted in a specialized design project, THE BUNGALOWS BY TODD SNYDER. Inspired by the success of the FROM AWAY LODGE BY TODD SNYDER, a project unveiled at the resort in September of 2020, this new collaboration features a redesign of the resort’s 20 one-bedroom bungalows, each measuring 650 square feet, with themes inspired by the designer’s travels to the Rangeley Lakes, Mount Katahdin, and Sebago Lake and reflecting the resort’s emphasis on rustic charm. Each bungalow has a floor-to-ceiling stone fireplace, an outdoor rain shower, a screened porch, and expansive windows; each also features a custom Spotify playlist created by Snyder that plays upon the guests’ entry, creating an immersive experience. The bungalows, which Snyder designed in collaboration with interior designer Krista Stokes and Mark Cotto, creative director of the KENNEBUNKPORT RESORT COLLECTION, can be rented for $650 per night.

BOWDOIN COLLEGE in Brunswick has unveiled SUSTAINABLE BOWDOIN 2042, a project that will invest $100 million into campus infrastructure, enabling the institution to switch to mostly carbon-free energy by 2042. The primary ways it plans to do so are by producing renewable electricity, increasing the efficiency of the buildings on campus, and installing a heating system that does not rely on fossil fuels. Phase I of the project, which will run from 2022 to 2037, focuses on creating tighter, more efficient building envelopes and completely rebuilding the campus’s heating system, which is responsible for 75 percent of the college’s carbon emissions. This phase of decarbonization will include transitioning the steam-based central heating system currently used in 52 of the institution’s buildings to a low-temperature hot water system that will work with heat pumps or solar or geothermal energies. Phase II, which will replace the college’s gas-fired central heating plant with an alternative energy station, will run from 2037 to 2042. In addition, the liberal arts college plans to use renewable resources for 100 percent of the school’s electricity by the end of 2023, with 88 percent already sourced from solar energy.

In an effort to pump new life into abandoned hand-carved stone quarries in JINYUN COUNTY of the ZHEJIANG PROVINCE, China, Beijing architecture firm DNA DESIGN AND ARCHITECTURE has created a series of cultural spaces to reinvigorate the area. Of the nine former quarry projects that the firm has undertaken, three are currently finished and now open to the public as a library, a performance venue, and a large gathering space. As a direct challenge to most over-designed tourist spaces in China, the firm specifically kept the quarry spaces as minimalist as possible to help connect locals and tourists with the area’s thousand-year history. In quarry 8, where the library was built, existing stone platforms were connected with new concrete steps, seating was made from steel and pressed bamboo, and book cabinets were built into the large, existing stone steps. Quarry 9, which holds the performance venue, has a flat stone stage with sunken seating placed around it, mostly drawing on the space’s large, cavernous walls marked by the patterns from when it was carved by hand. The firm hopes to use the project to draw attention to the renovation and reuse of the spaces. 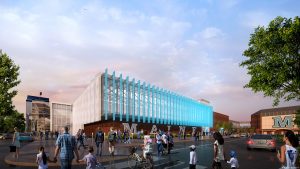 As a part of the UMS TRANSFORMS initiative, kickstarted by a $240 million donation to the University of Maine system by the HAROLD ALFOND FOUNDATION in October of 2020, the UNIVERSITY OF MAINE ATHLETICS MASTER PLAN has selected Maine-based architecture/engineering firm WBRC and Kansas City–based firm CRAWFORD ARCHITECTS to design the future UMAINE INTERCOLLEGIATE ATHLETICS FACILITIES on the University of Maine at Orono campus. With the goal of creating athletics facilities that will serve as a statewide resource for college and high school athletes alike, as well as advancing gender equity and inclusion in sport, the future facilities will include both women’s field hockey and soccer complexes, as well as an aquatics center, a track and field complex, and a football stadium, among others. Slated to take around ten years from start to completion, the project will support Maine’s only Division I athletics program.

Created with the intention of maximizing the amount of sunlight experienced in interior spaces as well as combatting the effects of air pollution, Italian architecture practice MARIO CUCINELLA ARCHITECTS has designed a curved, 40,000-square-meter hospital in Milan featuring exterior ceramic fins covered with a titanium dioxide coating that breaks down smog particles. Nicknamed “the iceberg” due to its nonuniform shape, the ten story SAN RAFFAELE HOSPITAL features a wavelike silhouette enhanced by the fins, the top five stories of which vary in depth in response to the sun’s path. In addition, a rooftop garden serves as a place of respite for hospital staff, visitors, and patients, providing a quiet place to experience weather conditions and by extension the passage of time, an effect often lost in enclosed hospital spaces.