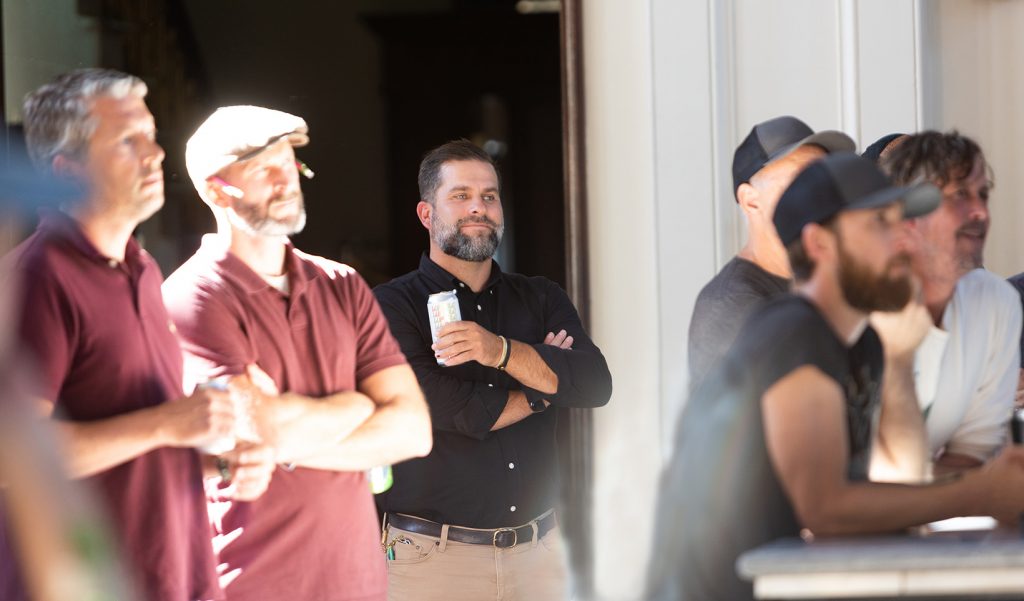 Architect and builder Caleb Johnson never wanted to work for anyone else. “For better or worse, I was bullheaded about it: I would work for myself,” he says. “It started very early. I always imagined I would run a business; I would run my own design and construction ﬁrm.” As soon as he ﬁnished his required three-year internship, he struck out on his own, forming a partnership with his friend Trent Bell. After three years the ﬁrm was beginning to make progress, but Bell “knew he needed to do something else,” says Johnson; he left the partnership in 2006. (Bell is now a renowned photographer who frequently contributes to this magazine). For the next 15 years, Johnson grew what he calls a “design-forward construction ﬁrm” under his own name, gathering accolades and recognition along the way. Today the ﬁrm employs nearly 70 architects, builders, designers, carpenters, and other professionals, and the name Caleb Johnson looms large in Maine architecture and construction. So it was a surprise to many when Johnson announced last month that not only were seven of his employees becoming partners in the business—his ﬁrst since working with Bell—but that he would be “taking his name off the door”: the company will now be known as Woodhull.

The shift, says Johnson, brings the ﬁrm’s branding and structure more in line with its values, recognizing the collaborative, integrated work that goes into its projects. “It speaks more clearly about what goes on around here,” he says. “When you count up the hours that go into a home we build, that can be 6,000 or 8,000 hours of work from our builders, cabinetmakers, architects, project managers, not to mention many more hours put in by electricians, plumbers, metalworkers, excavators, et cetera. The value I add has the most impact in the ﬁrst few weeks of a project’s development.” David Duncan Morris, the ﬁrm’s director of residential design, notes that the move away from a named architect is “revolutionary” in the ﬁeld. “As creative people, who have gone through schooling and taken on all that liability, gone through a lot of testing and rigor—we tend to be egotistical people that think the name on the door is the measure of success. This is the antithesis of that. It’s about letting go of ego, about giving everybody the opportunity to expand.” Johnson admits that it’s challenging to give up the ambition to have his own name stamped on a body of work. “But fundamentally I believe it’s the right thing to do. I remember what it’s like to be a young architect and do good work and never get to share in the credit. I can see the long term beneﬁts to people who are young now. Work not being associated with one person is kind of liberating.” 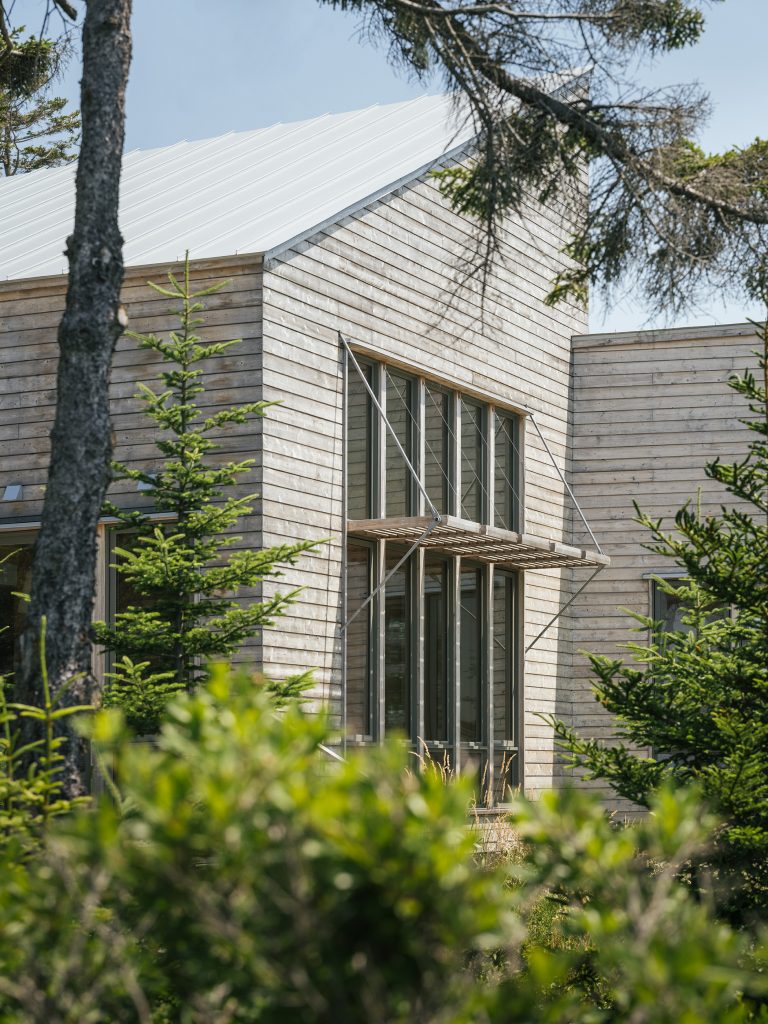 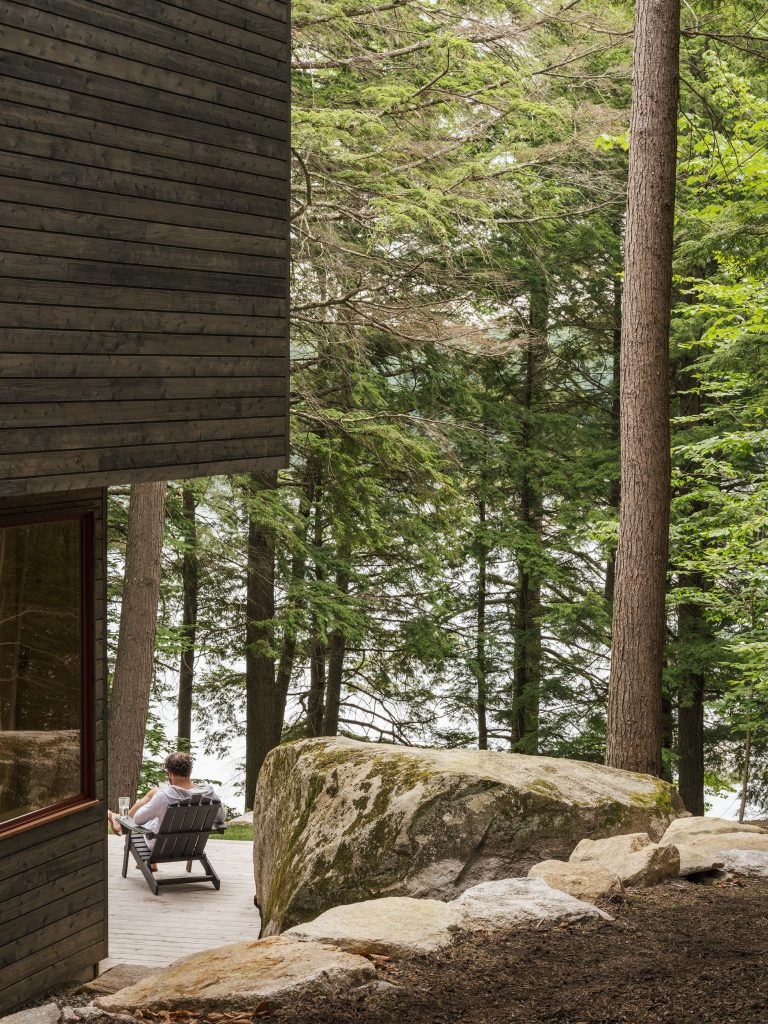 Johnson adopted the name Woodhull a few years ago for the construction arm of the business, while the design division remained Caleb Johnson Studio. “Over time we realized that we don’t have to have two distinct divisions,” says sales and marketing manager Amanda Cleary. “We are a fully integrated company, and we have been for some time. It’s a way for us to express that this is a collective experience; there’s no project we put out where one person can take credit.” In addition to recognizing each team member’s contribution, the model creates opportunities for richer collaboration among craftspeople who might elsewhere work in tandem, but separately. “Caleb’s bigger vision is believing that a large group of people is stronger than any one individual,” says Scott Stuart, who runs Woodhull’s millwork division. “How that trickles down is real, true collaboration between architecture and building and millwork.

“Maine is a small state. It’s kind of a privileged situation: if you really care about what you’re doing around here you can affect the culture, even the region. I expect Woodhull to do that over time. By doing work that’s to the best of our ability, pushing a little boundary here or there, making people think about this material or that, we can affect what people want, and see the appetite for building in Maine gradually change.”

A lot of times millwork shops are working toward pleasing an architect’s vision, and it stops there. Here, the design and architectural team understand that the makers may actually have a deeper understanding of how natural materials are connected in honest ways.” That understanding, says Johnson, pays off over time. “I think the biggest reason to vertically integrate is that I have seen that, gradually, as we increase those collaborations, we get a higher level of product for those 8,000 hours that go into a house.”

If the Woodhull rebrand promises positive returns through its effects on morale and product, it is also motivated by the more abstract aspiration to build a business on the same principles Woodhull’s designers and builders use when they are creating a building: durability, honesty, and thoughtful use of resources. Johnson recalls being inspired by a conversation with Stuart about aspen trees, which became “kind of a mental mascot.” He explains, “An aspen tree is a whole grove, hundreds of trunks. I started to visualize that we could grow a 40-year-old oak tree here with my name on it; maybe it survives, maybe it doesn’t. I’ve seen similar ﬁrms go from strength to obscurity; as that one person started to lose relevance, so did the ﬁrm. Instead of that strong oak, I’ve been enjoying the visualization of the aspen grove with multiple trunks, growing, reaching for resources as we move toward ﬂexibly making use of our collective talents. If one trunk goes, if 25 percent of the trunks go, the grove can still thrive.” For people who have spent their careers creating structures meant to endure, planning for sustainability makes intuitive sense. “I think Caleb feels, and I agree with him, that it would have been a waste of a career to build something that would disappear as soon as he gets ready to leave. It would have wasted his time, our time, our clients’ time,” says Morris. “It’s the same thing when we look at buildings. We don’t want to waste people’s time doing designs that aren’t thoughtful; we want to be careful about how we use mate-rials. By creating this partnership program, Caleb’s doing something that is maybe not in his ﬁnancial interest, but he’s doing it to preserve this thing that he’s given so much of his life to.” 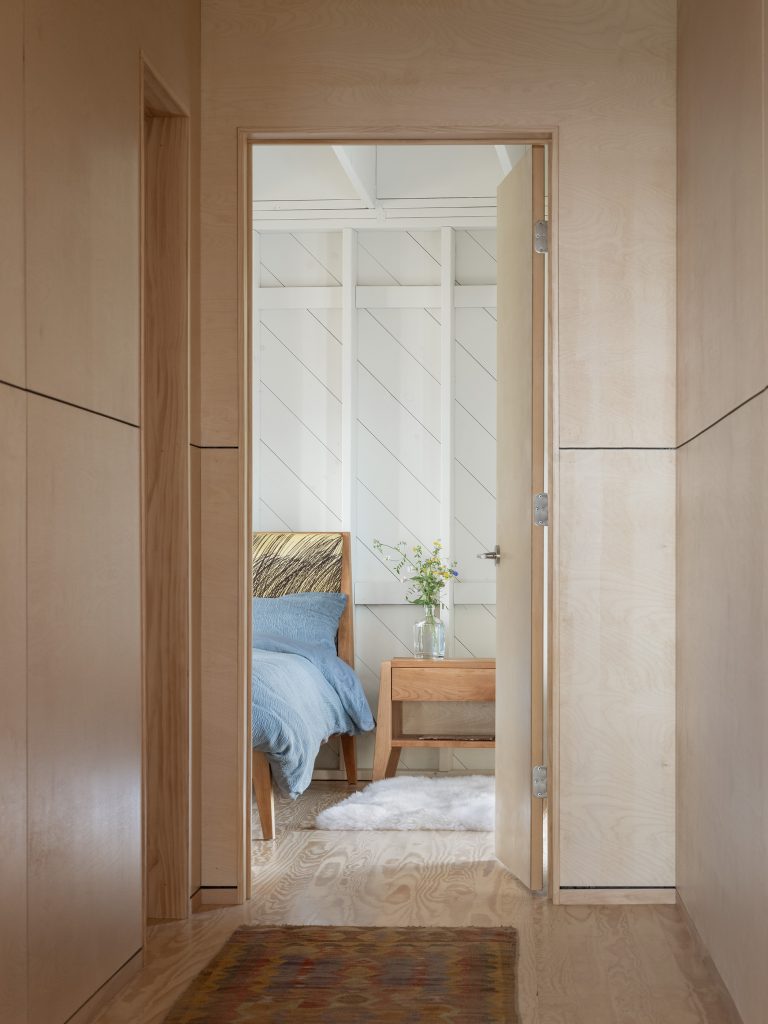 At the core of Woodhull’s ethos is a faith that work, if done with integrity and care, will speak for itself—an idea that seems at odds with a world of Instagram and “starchitecture.” “Much of my career before was about show-ing what I can do,” says Stuart. “Here, the idea is, don’t do things just because you can. It’s harder and takes more discipline to do things that don’t show on the surface. Some of the work we’ve been doing recently has a few moments in it that may not ever be seen or found by the client. I love that idea. But trying to work this way, it’s tricky, it’s hard, it’s exploratory, it’s vulnerable.” But Johnson trusts his colleagues, and he trusts that their shared commitment will manifest in artistic and business success. “We have our values aligned,” he says. “It goes back to durability. If a home is not sensitive to what’s around it, someone will call someone like me to renovate it. I’d like a Woodhull project most of all to be sensitive to its context. It involves a sensitivity to and honest manifestation of the things that are surrounding us. I don’t know how to run a business without doing that.”