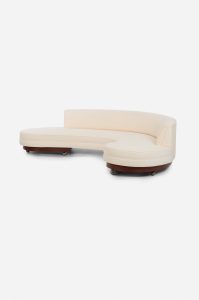 His name might not be as familiar as that of Charles and Ray Eames or George Nelson, but Vladimir Kagan is one of the great pioneers of modern furniture design in America. Kagan’s father was a Russian master cabinet- maker who took his family first to Worms, Germany, and then to New York City in 1938. Vladimir (who preferred to be called Vladi by his family and friends) worked under his fa- ther for years while studying architecture at Columbia University. “I was not well suited to being a good cabinetmaker. I was too impatient, impulsive,” revealed Kagan. “My father always said to me, ‘Vladi, measure three times and cut once.’ And I would cut three times without bothering to measure … but I was damn good at conceptual ideas.”

In 1950, at age 23, he opened his own showroom on 57th Street in New York City with his business partner, Hugo Dreyfuss. At the time the neighborhood was the epicenter of the art world. He never designed for the mass market, and ten customers would keep him very happy. Those customers were typically collecting major artworks including Pollocks, Rothkos, and Hofmanns. He noticed the collectors were often moving furniture away from their walls so they could sit and enjoy the artwork together. It was not long after opening his showroom that he made a splash with his 10-foot-long, low Serpentine sofa that could easily float in the middle of a room—it is meant to be observed from every an- gle like a piece of sculpture. Kagan was inspired by the Bauhaus school’s philosophy of “less is more” and thought that by making a bigger sofa there would be a need for fewer chairs. His furniture was also very much influenced by Danish designers like Finn Juhl (read MH+D’s Design Lesson in January 2020) and Hans J. Weg- ner, with their smooth wooden shapes and emphasis on comfort and functionality. He referred to his furniture as “vessels to hold the human body.”

Almost all design historians, designers, and collectors refer to Kagan’s designs as sensual. While many furniture designers during his time created with suburban households in mind, Kagan designed for young, sophisticated city dwellers. His signature de- signs were sleekly curved frames and dramatic outthrust legs; he made furniture sexy. The avant-garde furniture he created in the 1950s, 1960s, and 1970s is still popular with designers and collec- tors today, including fashion designer Tom Ford and interior de- signers Amy Lau and Kelly Wearstler. When business decreased and Kagan closed his showroom in the late 1980s, he thought he would retire and collaborate with other design companies as a consultant, but that didn’t last long. Tom Ford, who was Gucci’s design director from 1994 to 2004, selected 360 Kagan sofas to go in every Gucci store around the world, and soon André Balazs began installing Kagan furniture throughout his Standard Hotel empire. In 2016, at age 89, Kagan died of a heart attack, but his designs live on and can be found in numerous museum collec- tions, including the Metropolitan Museum of Art in New York City and the Victoria and Albert in London. Among the famous names who commissioned and collected his designs are Marilyn Mon- roe, Gary Cooper, Andy Warhol, David Lynch, Tom Cruise, Demi Moore, and Brad Pitt.