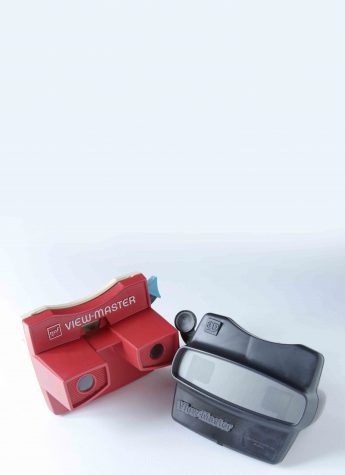 Many of us had a classic red plastic View-Master growing up. When you inserted one of the cardboard disks and clicked the lever, you quickly escaped to another place. These trips included destinations as varied as the Las Vegas strip, the Grand Canyon, Carlsbad Caverns, and outer space.

The original cardboard disk (or reel) had stereoscopic pairs of photographs that, when viewed through the awkward clunky apparatus, created the illusion of three-dimensional scenes. It was invented and manufactured by Sawyer’s Photo Services, a company that produced scenic postcards, slides, and projectors. Sawyer’s View-Master debuted at the 1939 World’s Fair in New York.

But the first View-Master was meant as an educational tool, not a toy. This changed in 1958 when industrial designer Charles “Chuck” Harrison (1931–2018) was selected to redesign the View-Master while working at the Chicago firm Robert Podall Associates. His models F and G reduced the bulk of the original View-Master, and a new materials were used that allowed for new colors—red—revolutionizing the product’s market appeal. This was during the “golden age” of industrial design, a time after World War II when newly prosperous families were eager to buy products they saw advertised on their boxy television sets.

While in Chicago, Harrison also freelanced for the department store chain Sears, Roebuck, and Company, but it wasn’t until 1961, when Sears discarded its unwritten policy against employing African Americans, that Harrison was formally hired by the company. He remained with Sears for 32 years, eventually leading the firm’s design team. Harrison was the first Black executive at the company’s headquarters and one of very few prominent designers of color at that time. Aside from the View-Master, Harrison’s products included lawn mowers and power tools, cordless shavers, and the very first plastic trash can (including one with wheels). He helped design over 750 products for Sears alone.

In 2008 the Cooper-Hewitt, Smithsonian Design Museum gave Harrison a lifetime achievement award “in recognition of an individual who has made a profound, long-term contribution to contemporary design practice.”

So what happened to the View-Master? You can still find the classic red version online, but in 2015 Mattel also released an updated virtual reality version. This version has an apparatus that holds a smartphone. The viewer travels to other lands via an app rather than the cardboard disks with pictures, and the experience is completely immersive—but the click of the lever is gone.