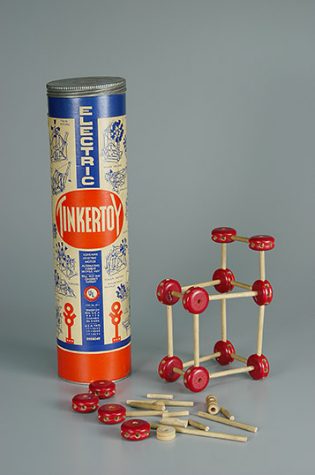 It’s that time of year when the classic holiday movie A Christmas Story airs on television. When Ralphie, the main character, is asked by his mother what he would like for Christmas, he responds, “I guess I would just like some Tinkertoys.” He fears hearing the dreaded words “You’ll shoot your eye out” by admitting he really wants his coveted Red Ryder BB gun. He instead selects the classic Tinkertoy because it was (and is) considered safe and, most importantly, educational. Tinkertoys are grouped with other iconic twentieth-century construction toys like Lincoln Logs and Erector sets that help teach children about spatial relations and encourage imaginative play.

Toys reflect the times in which they are made and are often re- placed by more innovative toys. But some endure for several generations—like Tinkertoys. The toy was invented over 100 years ago by stonemason Charles Pajeau, who worked for his father’s monument business. He was tired of carving tombstones and spent a great deal of his time tinkering with new inventions that often failed. One day, he was watching children play outside using sticks, pencils, and old spools of thread, and was impressed by how simple materials ignited their imagination. He devised a construction set of similar wooden pieces, calling his new invention the “Thousand Wonder Toy.” On the commuter train from his home in Evanston, Illinois, to Chicago in 1913, Pajeau proposed his newest invention to Chicago Board of Trade trader Robert Pettit. Together they started the Tinkertoy Company. In 1915, a year after its creation, the business produced 900,000 construction sets for Christmas delivery. In five years, six million sets had sold.

The cornerstones of the sets were the wooden spools that were roughly two inches in diameter, with holes drilled every 45 degrees around the perimeter and one all the way through the center. With the differing length of sticks, the set was intended to be based on the Pythagorean progressive right triangle. Tinkertoys came with instructions for creating elaborate mechanical “tools,” such as printing presses, lathes, airplanes, and power saws. Probably the most famous form made using the set is the Ferris wheel. The toy’s designer once noted that imitators did not appreciate the geomet- ric principles behind Tinkertoys and their rip-offs inevitably failed.

The toy was originally intended for younger children, but in 1919, with the addition of an electric motor, it became a more sophisticated gift for budding architects and engineers. The economic boom of the 1950s brought color to this classic wooden toy and the sticks appeared in red, green, blue, and yellow. One of Tinkertoy’s most distinctive features is the packaging. Initially, the tube design was chosen to reduce shipping costs and included space for postage and an address label. The containers came in several sizes to accommodate the different sets, and distinctive names and numbers indicated their contents.

Playskool acquired Tinkertoy in 1985 and redesigned it in 1992 in honor of its eightieth anniversary. The new version featured brightly colored plastic parts, with each set designed to create certain objects.

Over time, Tinkertoys have been used to create complex machines, including Danny Hillis’s tic-tac-toe-playing computer (now in the collection of the Computer History Museum in Mountain View, California), and a robot at Cornell University in 1998. Tin- kertoys were inducted into the National Toy Hall of Fame at The Strong Museum in Rochester, New York, in 1998. Hasbro and K’NEX now own the Tinkertoy brand and currently produce both Tinkertoy Plastic and Tinkertoy Classic (wood) sets and parts. The toy continues to inspire children’s creativity, as they use it to turn their ideas into reality. One of its early advertising slogans stressed the open-ended play the creation continues to offer: “I build a thousand wondrous things that teach both girl and boy; I bring content and happiness; My name is Tinkertoy.”