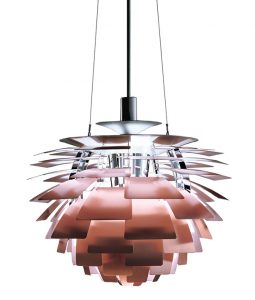 Have you ever walked into a store or restaurant and been completely turned off (pardon the pun) by the horrible lighting? Poul Henningsen was born in a small Danish town in 1894, growing up in a world lit gently by gas lamps and candlelight. Henningsen, who is commonly referred to by just his initials, studied architecture and building in the 1910s, but he is best known for his lighting designs. It is said that his obsession with lighting came from his mother, who apparently worried how she looked in the harsh light of the new electric bulbs replacing those softer sources of illumination. In 1924 he designed his landmark “PH-lamp” with its tiered lampshade system believed to be inspired by a stacked cup, bowl, and plate. The shade system distributes light evenly while reducing glare, all achieved by the size, shape, and position of the shades. He went on to create over 100 lamp designs over his career. “The aim is to beautify the home and those who live there, to make the evening restful and relaxing,” said Henningsen.

Henningsen’s most famous piece is his Artichoke lamp. In 1958 Henningsen was commissioned by architects Eva and Nils Koppel to design the lighting for the newly constructed Langelinie Pavilion, a modernist Copenhagen restaurant. He worked with lighting manufacturer Louis Poulsen to create his iconic luminaire that resembles an upside-down artichoke. The piece is composed of 72 spun-steel leaves in 12 rows; each row holds 6 leaves that are hand-calibrated to ensure 360 degrees of glare-free lighting. The leaves completely conceal the light source inside, and the lamp serves as a sculpture on its own when turned off.

Henningsen always insisted copper be used for the Artichoke, but after his death in 1967 other materials were added. The light has been solely produced by Louis Poulsen since its debut and is still available in its original copper finish as well as other finishes, including brushed and polished steel, brass, and white and black metal. Today the smallest of the Artichokes starts at $11,600. The PH Artichoke lamp can be found in major public and private collections internationally, including the Museum of Modern Art in New York City and the Victoria and Albert Museum in London. There are many iterations and imitations on the market.