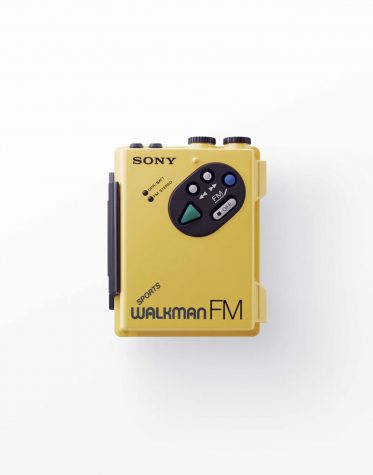 Sometimes you just need to disconnect from everything. Today that usually means putting down your phone to stop scrolling through Instagram, but once upon a time it meant putting on headphones, pressing PLAY, and tuning out the world. It’s hard to imagine, but personal portable music didn’t exist until 1979 when the Walkman was released by the Japanese company Sony. The iconic cassette tape player went on sale on July 1, 1979, for $150. The advent of the Walkman let people walk around to their own private soundtrack. “We just got back from Paris and everybody’s wearing them,” artist Andy Warhol told the Washington Post. He followed up by praising the headphones for preventing his hair from blowing around.

So where did the Walkman come from? The story goes that Sony’s co-founder Masaru Ibuka decided that he wanted to listen to opera in a more portable form than Sony’s existing TC-D5 cassette players. He charged Sony designer Norio Ohga with this task. Ohga came through with a prototype out of the Sony’s Pressman cassette recorder. Ibuka brought the result to Sony’s Chairman, Akio Morita, and reportedly said, “Try this. Don’t you think a stereo cassette player that you can listen to while walking around is a good idea?”

The company did not have high hopes for their device at first. Morita, in particular, was so unsure of the device’s success that he ordered a manufacturing run of only 30,000 (a drop in the bucket for the company at that time). Within a year and a half, Sony would produce and sell two million Walkmans. Steve Jobs, then the young CEO of a Silicon Valley startup called Apple Computer, personally received a Walkman from Morita on a business trip to Japan. Jobs was there in search of disk-drive suppliers in the early 1980s. When Jobs returned home, he didn’t bother listening to a cassette on the Walkman. He opened it up and examined the components piece by piece.

The original Walkman was made from aluminum, but later models were made of plastic. The Walkman also created the need for lightweight headphones. Prior to its arrival, headphones were for stationary use and heavy, but Sony was able to get the headphones down to just 45 grams for the Walkman. Morita initially thought people would want to listen to music together, so he put two headphone jacks on the player (you need to remember headphones went over your head not like the earphones/pods you can share between two people today). Until this point in time music was primarily a shared experience via the barroom jukebox, boom boxes, and record players. After the Walkman, music could be a private experience, silent to all but the listener.

The Walkman was mentioned literally everywhere: in movies, magazines, newspapers, music compositions, etc. Most of us remember the famous scene in Pretty Woman with Julia Roberts in the bathtub listening to her yellow Sony Sports Walkman, singing along with Prince. The Sports Walkman was splash proof, ideal for use by those whose outdoor activities would ruin normal cassette players. This device spawned the idea of listening to music wherever and whenever you want. Susan Blond, a vice-president at CBS Records, told the Washington Post in 1981: “It’s like a drug: You put the Walkman on and you blot out the rest of the world.”

As a child of the ’80s and early ’90s I lived during the heyday of the Walkman. The yellow Sports Walkman was literally the only thing I wanted one year. I even decided to “invest” in Sony stock for my fifth-grade project, following the ups and downs of the market for the year. The WM-F5 (shown here) marked the first appearance of the distinctive yellow seen in later sports models. The case was made of impact-resistant ABS plastic, and all controls were protected by cool rubber seals to make them splash proof. The green and blue play and stop buttons were also rubber and shaped and positioned for easy use.

I know all of you are eager to find out if I ever got that Walkman. The answer is no, my mom somehow got confused and got the yellow Sony Walkman of my dreams for my brother that Christmas, and I got a Pogo Ball.

The Sony Walkman can be found in the permanent collections of the Victoria and Albert Museum, the Museum of Modern Art, and the Cooper Hewitt, Smithsonian Design Museum.