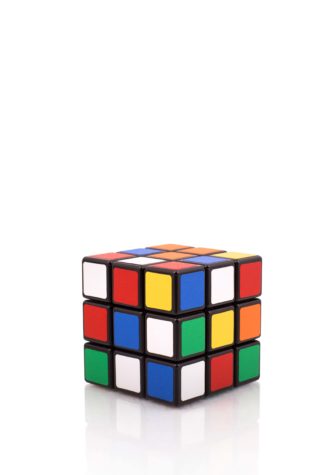 It’s one of the most iconic puzzle toys, but it was never meant to be a toy. The Rubik’s cube is a cube-shaped puzzle that has nine small squares on each side. When it is removed from the box, the squares on each side of the cube are the same color. The goal of the puzzle is to return each side to a solid color after you have turned it several times. It can be arranged in nearly 43 quintillion (43,000,000,000,000,000,000) different ways.

In 1974 Hungarian architect and professor Erno Rubik wanted to create a tangible object to teach his students about spacial relationships. This resulted in a model made using chunks of wood and rubber bands to form a structure that allowed individual blocks to move independently of one another without the entire structure falling apart. He called it the Magic Cube (buvös kockain Hungarian). Rubik said, “It was a piece of art but at the same time it was an intellectual task as well.” It took Rubik over a month to solve the puzzle himself. “It was code I myself invented! Yet I could not read it.” At the time Hungary was behind the Iron Curtain, so it took a bit longer to market Rubik’s puzzle to the rest of the world. It was shown in a new plastic form at the Nuremberg Toy Fair in 1979, where famous toys such as the Playmobil line launched in 1974. By 1980 the Rubik’s cube (its name now officially changed from the Magic Cube) was licensed by the ideal Toy Company. This cube is made up of 27 plastic pieces (cutlets, as they are often called), but only 26 are visible to the eye (there is one in the very center of the cube). Each side of the overall cube measures 2.25 inches; each cube let has a concealed inward extension that interlocks with other while permitting them to move to different locations.

The cube’s popularity was at an all-time high in the early 1980s, although most kids during that time were not actually solving the puzzle but cheating by peeling off the colored stickers or breaking the cube apart and reassembling it. It has never fallen out of fashion thanks to “speedcubing” competitions, where competitors solve the cube as quickly as possible. The current world record is held by an Australian named Feliks Zemdegs, who solved the puzzle in 4.22 seconds. Market studies done in 2009 determined that more than 350 million units had been sold worldwide, making the Rubik’s Cube the biggest-selling puzzle toy of all time.

*This Design Lesson is dedicated to my nephew, Fen, who can solve the cube in 45 seconds.