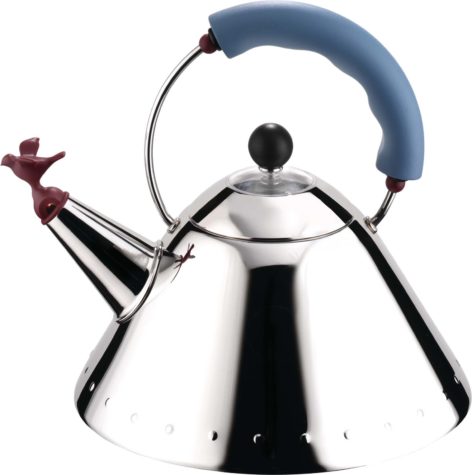 The iconic 9093 kettle was born out of the Tea and Coffee Piazza project in the late 1970s. The Italian housewares company Alessi invited 11 architects, none of whom had previously worked in industrial design, to design a tea and coffee service. One of the requirements for the participants was that each service use architectural elements to create a miniature “time square” using a teapot, coffeepot, sugar bowl, tray, and creamer. The 11 limited-edition silver services were too expensive to mass produce, but the prototypes can be found in the permanent collections of some of the most renowned museums in the world. Participant Michael Graves later designed his streamlined kettle with its iconic bird for Alessi in 1985. The kettle incorporates both the clean lines of modernism and some tongue-in-cheek elements of postmodernism. Its cartoonish attributes are symbolic—the red bird resting on the spout is meant to warn the user that its area of the kettle is hot, while the light blue handle reveals it is cool enough to hold.

The kettle has a mirror-polished 18/10 stainless-steel body, a magnetic base that helps water to boil quickly, and a polyamide resin bird and handle. The bird on the spout whistles to signal that the hot water is ready. Two million 9093 kettles have been sold over the years.

Graves, who passed away in 2015, went on to design a family of kitchen-based products for Alessi that are still in production today. These designs for Alessi were a springboard for a similar but more affordable line of products sold by Target in the early 2000s.