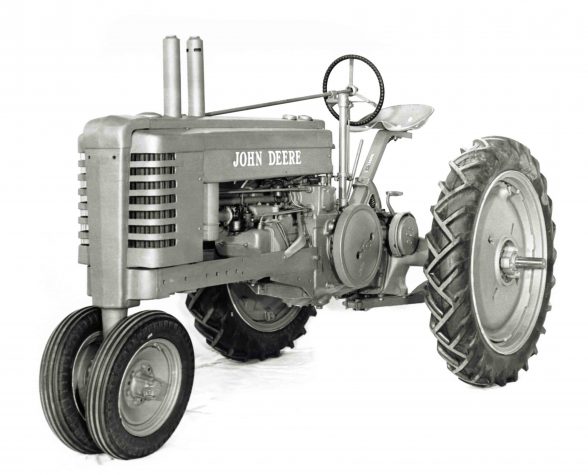 American industrial designer Henry Dreyfuss is credited with the design of several well-known objects and brands, including the 302 tabletop Bell telephone, the round Honeywell thermostat, the Hoover model 150 vacuum, the Big Ben alarm clock, and New York Central Railroad’s streamlined Mercury train (both locomotive and passenger cars). But it was his collaboration with the John Deere company that was the longest and perhaps the most successful of his career.

From 1937 to 1953 Dreyfuss worked to create a trusted brand in John Deere, ranging from streamlining and restyling tractors to designing rakes and engines, company stationery, and of course, the famous leaping deer trademark. In November 1937 Dreyfuss presented Deere’s engineering team with a wooden mock-up of a Model B Tractor. Seven months later, in June 1938, it was decided that they would produce Dreyfuss’s “styled” tractor at John Deere, starting with the larger Model A. By late July 1938, the first styled Model A was completed in Deere’s Waterloo, Iowa, factory. Later that year the Model B was released; with a more rounded hood and grill, the tractor now looked as good as it performed.

Like all good designers, Dreyfuss put the users of the products first. He was known for incorporating anthropometrics, the study of human dimensions and capabilities, into his practice. He created “Joe” and “Josephine,” who represented the average male and female in the United States in the 1950s and consulted with Columbia University’s ergonomics expert Dr. Janet Travell on seat design for Deere (her work was kept secret, at her request, to keep the confidentiality of one of her patients: then–presidential candidate John F. Kennedy). Deere introduced the Float-Ride seat in 1956, adding foam-rubber padding, torsion springs, and a hydraulic cylinder to absorb shock; it offered significant advances for operators of any shape, size, and weight. By the end of Dreyfuss’s tenure, tractor seats and all the machinery at John Deere were designed according to how the human body works.

“Even like the earth itself, and that special breed of men who till and seed and nurture it and reap its bounty, the implements of agriculture have a frugal, rugged, no-nonsense quality even amid today’s mechanical sophistication,” wrote Dreyfuss. “By fitting the machine to Man, we perpetuate a product ‘look’ that echoes a company’s creed and tradition.”

Dreyfuss began his formal studies at 16 when he received a scholarship to the New York Society for Ethical Culture to study art and set design. It was there that he attended classes taught by designer Norman Bel Geddes, an early leader of the streamlining design movement. Dreyfuss called Bel Geddes “genius number one in my life.”