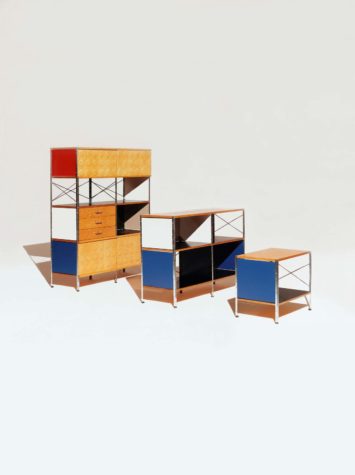 The design couple Charles and Ray Eames collaborated on many projects throughout the years, from architectural structures and urban planning to film, toys, and furniture. It is their furniture work that they are most known for today. The Eames Storage Units (ESUs) reveal the designers’ effort to design and produce economical household modular storage furniture using industrial production techniques. The Herman Miller Furniture Company began manufacturing the ESU in 1950, and the original production continued until 1955. Early models were made using low-cost materials such as birch plywood, lacquered Masonite, laminate and perforated aluminum, and zinc-plated steel. Unlike furniture today that has a similar aesthetic, the ESUs could not be shipped in flat cardboard boxes and assembled by the consumer. The original ESUs were all assembled in the factory (with sometimes over 300 parts on each piece) and then shipped by rail or truck.

The system has many of the same features as the Organic Design Case Goods created by Charles Eames and Eero Saarinen in 1941 for the Museum of Modern Art’s Organic Design in Home Furnishings competition; like the Eero–Eames furniture, it comes in a variety of sizes that can be mixed and matched. The ESU also undoubtedly resembles Eameses’ Case Study No. 8 house in the Pacific Palisades neighborhood of Los Angeles (Google them both!). The house was part of the Case Study program sponsored by Arts and Architecture magazine.

The standardized parts of the ESUs are completely interchangeable; they can be stacked and can serve as room dividers; and they easily accommodate a variety of office uses or residential storage needs in living rooms, dining rooms, and bedrooms. The color of the basic model of the ESU is calm and clean, in a natural birch or walnut, and the client can add color including zinc panels of brilliant blue, red, and yellow.

Herman Miller and Vitra resumed production of the Eames Storage Units and Eames Desk Units in the 1990s. They are still manufactured by these two companies today.