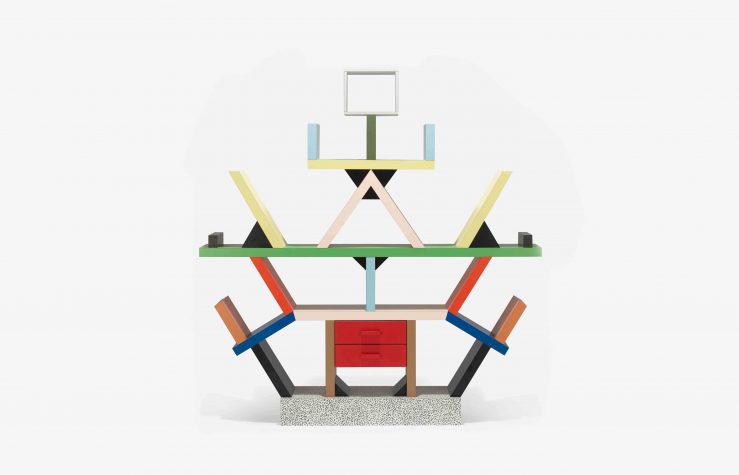 The Memphis Group was founded by Italian architect and designer Ettore Sottsass (1917–2007), along with 12 other designers in the early 1980s. Memphis pushed the boundaries of design. The sharp geometric colorful patterns and angular furniture opposed the streamlined simple midcentury style of modernism. Often the pieces mixed high- and low-cost materials, including laminate. The design world has described the style as “a shotgun wedding between Bauhaus and Fisher-Price.”

One of the most famous Memphis designs is the Carlton bookcase designed by Sottsass. In February 1981, the group met for just the second time to present the first drawings of furniture and objects to each other. “There were more than a hundred drawings, and in the end, everybody was drunk, but for the first time we were sure that Memphis would exist,” recalled Sottsass. One of the designs shown was the Carlton. The piece was intended for the higher end of the market and finely handcrafted, made of medium-density fiberboard (MDF) and cheap plastic laminate in different glossy colors. It’s a bookcase, a room divider, a chest of drawers. When first looking at the piece, the slanted shelving seems counter-intuitive, but it securely holds books (even better than standard upright shelving). It is based on a logical system of equilateral triangles creating a support system for both slanted and flat shelves. It has been compared to a robot greeting the user with open arms or a multi-armed Hindu goddess; many often question if it is a piece of furniture at all.

Due to Memphis’s emphasis on appearance over function, and random cross-referencing of historic forms and contemporary materials, the group became synonymous with postmodernism. The idea was to separate themselves from the bourgeois way of making furniture—that every type of furniture should look the same. Years before “disrupting” became a buzzword, they created chaos in the design world. The Carlton was produced as an unlimited edition; the design is one of the most recognizable Memphis products and is still sold by the Memphis Milano design store for around $17,870.